Thanks Hunttalk, Antelope and more

In the Summer of 2017 my family took a road trip to the South Dakota Badlands and Black Hills. On that trip, we saw our first Pronghorn and my son who was 10 then and I decided someday we wanted to hunt them.

When we returned from that trip, I googled Antelope hunting and quickly found this website and Randy's show. Since then I have been on here daily reading and learning as much as I could about units, points, etc. It helped that a family friend who is a member here has been a great help to answer questions and provide ideas.

We decided this was going to be the Fall to go as my son will be in High School next year and with school and football, it could be hard to get away for a week next Fall.

Draw results day came in June and I drew a type 7 Antelope tag and my son drew type 1 and type 7 Antelope tags as well as a regionwide Deer tag in the Eastern part of Wyoming. Since the draw date and before that I spent a ton of time looking at OnX, talking to wardens, biologists and communicating with other hunttalk members who have had similar tags in the past. I even mixed in a morning of scouting this August while on a road trip this Summer with my daughter. That helped me realize how large the country is compared to the maps I had been looking at for months.

Finally on 10/02 we made the drive to Wyoming. We arrived in our unit with about two hours of light to spare so we drove around some of the main public areas and did some glassing from a few high points. We did not see much except some for one group of Antelope on a 160 acre piece of public so we did not stalk those.

That evening a hunttalker texted me and told me where he had seen some deer that day. With the next day being a Saturday my son and I decided that the best plan was to give that spot a try as we could walk for a long way back in there and hopefully see some deer and/or Antelope.

Saturday morning we got out to our parking spot about 15 minutes later than I wanted but got back to the river bottom just after legal shooting time. In the next hour and a half we saw over ten deer as we glassed the area but the only buck was a spike Mule Deer. About the time the deer sightings diminished, we saw 2 nice Antelope bucks chasing around on private behind us and we also noticed some about 1 mile away on public. As we were making our way towards those, we noticed a lone Antelope making his way to the river bottom we were in. He was a long way off, almost a mile.We had a small section of private we had to go around to get closer to the path he was taking. 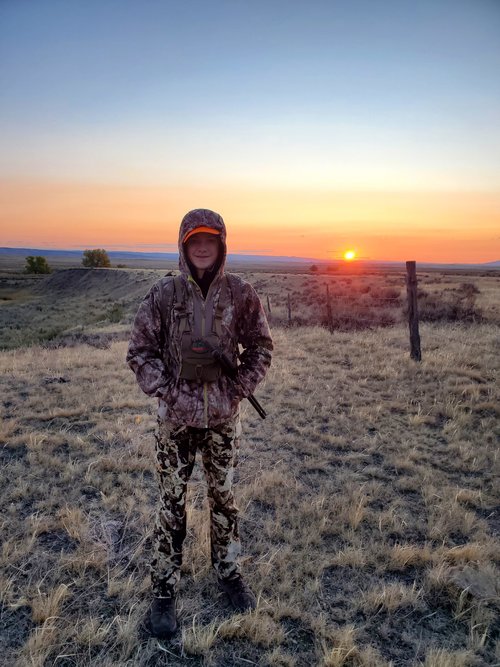 We were able get around the private and knelt down in a sage flat to watch the buck and try and make a plan. We watched him for about ten minutes, he was about a half mile away at this point. We knew he was not going to come to us as he was coming our way but angling left quite a bit. We dropped back into the river bottom and were relieved to find a cut extending out into the sage in the direction he was heading. We got in that cut and worked out about 200 yards into the sage flat and popped up on top and quickly found him. He was about 500 yards away at this point still angling left. We backtracked into the main river bottom and went about 200 yards and found another cut angling out into the sage.
We walked in this cut for about 100 yards and got up on top and were able to see the tips of his horns about 220 yards away. I got my son setup on the bipod for the shot.
The buck came out of the little dip he was in and offered a brief broadside shot but my son was not able to get the crosshairs settled before the buck turned and continued angling left. I thought we had not capitalized on what might be our only opportunity but was proud of him for not pulling the trigger if he was not comfortable with the shot.


There was about a 15ft. bank to climb up to get onto the sage flat. We climbed about 3/4 of the way up and peaked around a corner to see if the buck was in there. He was! He might have known something was up, but did not run or act too alarmed. We quickly got the bipod set up and my son behind the rifle.
The buck moved out of the ditch he was in and came up onto the river bottom flat at 100 yards. My son shot and shot right over his back!
I couldn't believe it, we had shot the rifle all Summer and felt he was good to shoot out to 275-300. He has shot 7 deer and all have been one shot kills.
The buck runs out a little further into river bottom flat and I take this time to get him prone on the backpack. Eventually, the buck stops and is quartering away. The gun goes off and he folds up! Lots of backslapping and high fives. We had accomplished our main goal of the trip on the first morning! We sat on the hill to soak in the moment, watch the buck to make sure he was done and pick out lots of cactus from our arms, knees and stomach.
Assessing the situation, I probably should have got him prone for the first shot as we were on an incline and I realize the bipod was not level for the first shot.


As we walked up to the buck, we realized that he was a very nice one for the area we were in. We sent some pictures to my Dad and he offered to pay for the mount for ky sons birthday and Christmas.
By this time it was getting hot, so we got to work getting the buck cut up for our first time doing the gutless method. My son carried the meat the 2+ miles to the truck on my pack and I took the gun, cape and horns and his backpack.
By the time we got back to our hotel, it was 2pm. We had some lunch and got prepared for the evening hunt.


We were now hunting to fill my sons deer tag and my doe tag. That evening, we saw plenty of deer but most were on private. 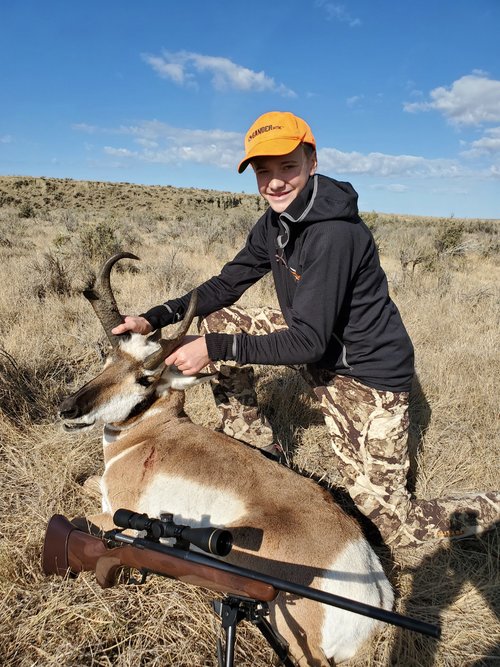 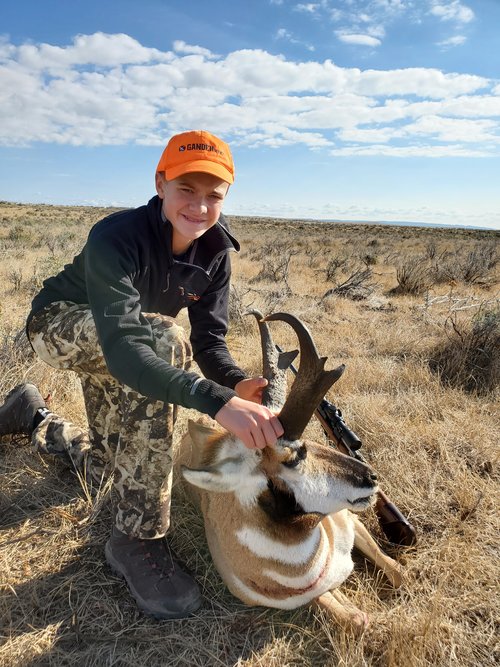 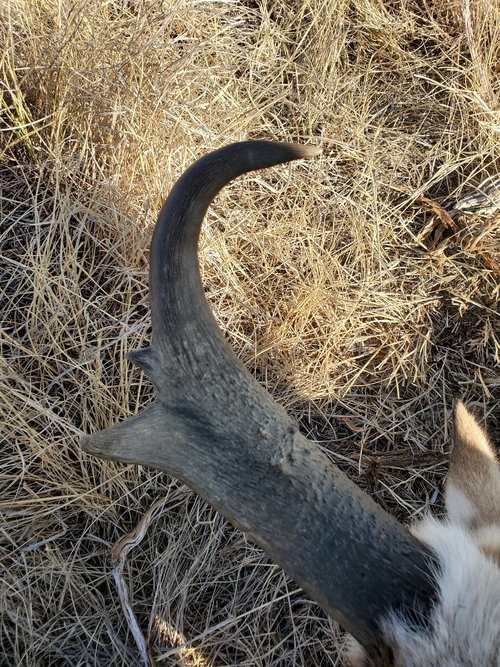 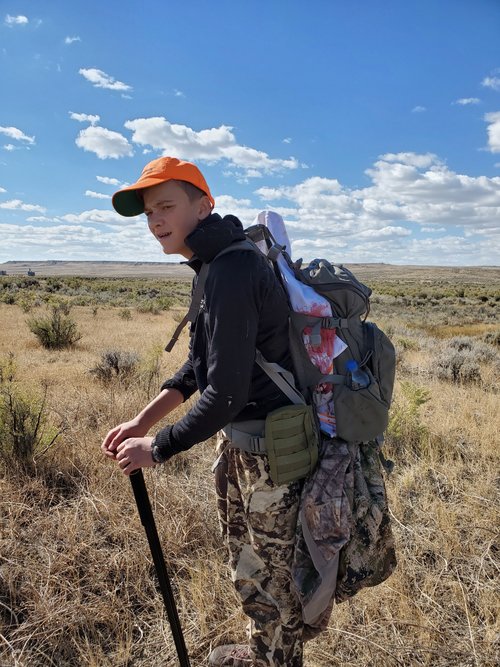 We made a plan to be on a glassing knob the next morning on the backside of some public where I felt we would see some deer and hoped that some would filter to bed in the public hills. Part of that plan was right as we saw deer but not much came onto the public. We did make a stalk on a nice whitetail that did not work out and we got within 75 yards of a 2x2 Muley that my son passed. By the time we got back to the truck, it was almost 11am. We then checked out a nearby unit where my son had a type 7 Antelope tag. It was getting real hot by 2pm so we went back to the hotel for a quick lunch and were back hunting by 3pm.

We checked out a few spots for my doe tag and eventually found a doe feeding, we started out the stalk trying to come up from below her but quickly realized that was not going to work and backtracked and came from above. This worked much better and after some belly crawling we were able to get within 230 yards. One shot and I had my first Antelope. By the time we got her packed out and back to the truck it was 615pm and closing time was 7pm. 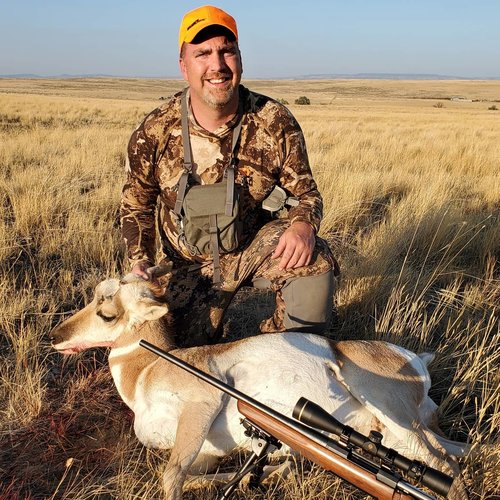 Looks like a fun trip! One you'll both remember forever!!!

We decided to take the quickest route to town which would put us on the paved road about closing time. This would allow us to glass some public spots for deer on the way. We came upon a hill that would allow us to glass public on both sides of the road. We quickly spotted a group of 8 mule deer that held a 4x3. It was not huge but was the nicest buck we had seen on public and this is definitely not a trophy deer area so we decided to go after him. We quickly got our stuff together and made a plan.


We were able to go relatively straight at them as they were in a depression and we did not have much time. We get to within 100 yards and we saw the tops of their ears. We quickly got the bipod setup and my son behind the gun. The deer started to head East but they came out of the depression when they did. After quickly confirming my son was on the right deer, he squeezed the trigger and the buck went down. He had his first Mule Deer! After some high fives, we got to work and were heading to the hotel by 730pm. 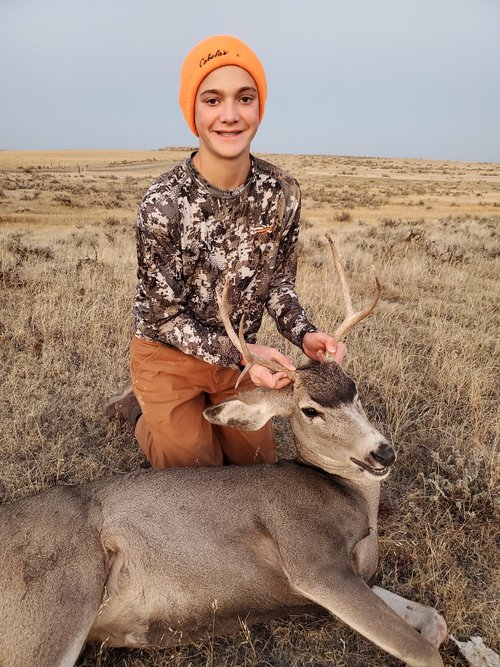 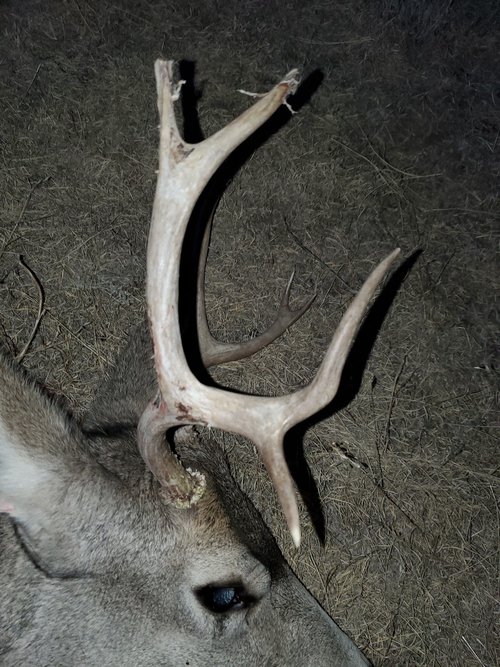 Great hunt so far. Keep it up.

You all had a lovely adventure, heavy on successfully notching tags. Congratulations

After we got the meat dealt with that night we were talking about the rest of our week and options. My son had one type 7 tag left. I told him we could stick around and try and fill that or do something else since we were in the West already. We talked through a few options and the best one we could come up with trying to join up with my Dad and his friend for some duck hunting. We usually go to SD duck hunting each Fall with my Dad and we were not going to be able to do that this year because of the Wyoming trip.


Monday morning we left Wyoming and joined up with my Dad and his friend for three great days of duck hunting. It was an awesome way to finish out a great week!


During the course of our WY hunt I was texting and sharing info with 3-4 other Hunttalk members who had similar tags. Prior the hunt, there were several folks who I talked with that were willing to share info. This really is a great place that I am glad to be apart of

Awesome write up!! Congrats to both of you on some nice animals and a great trip!

Congratulations on a great trip

It just does not get any better. Great job Dad! Love to see your success!

Can't imagine a trip much better than that! You and your son will remember this for a lifetime. Congrats!
E

Congrats to you both! It looks like a great adventure and lots of fun memories!

Did you go to a unit that requires points, and was your arrival a few days after the opener? Lots of crowds?

Great job @wihunter12
Good write up, and way to go for both you and your son.

Thanks for the kind words, it is a trip we will definitely not forget. Probably won't be able to match it, but we will try!

@EastTNHunter my son did have a couple points and we arrived the evening of the 2nd day of season. It definitely was not easy pickings, we were very fortunate.
You must log in or register to reply here.

Year of the pronghorn
2