Season of the Elk

I better finish this portion of my season of the elk!

I went into this hunt wanting meat! So a cow was off limits but a tasty spike is totally on the menu lol

Got up early and had coffee eventually came out of the hot box tent into the cold darkness about 15 minutes before it started getting light out. Got the goats saddled up and panniers on, I knew for a fact an elk was going to be harvested today. No doubt in my mind, you could say that is a little conceded thinking but I had seen them up there on Sunday and then again on Tuesday mid morning when I showed up. I knew if I came in with the wind in my face and followed my plan of getting across the drainage from them that I would have an excellent chance it’s not 100% chance to harvest an elk. The only terrible thing about this particular spot is that it is pretty much straight up from camp, it’s right around 1.75 miles to the Top from camp. It is very very very slow going, 1 foot in front of the other with literally no space in between. I’m so thankful that I have goats that will follow me anywhere. I started hiking about 7:30 AM and got 3/4 of the way up the mountain at 10:15 AM. As I was zigzagging up the steep mountain face I happened to glance over my shoulder to where the elk had been on Sunday afternoon, not expecting them to be there because they were farther toward the top of the mountain when I seen them yesterday mid morning, there just happened to be a single elk standing in an opening across the drainage. I put my glass on the elk and it was a spike!!!! Exactly what I was looking for. I range the elk as it went behind a stand of pine trees, 557 yards. Perfect I don’t even have to get any closer than I am now. The tricky part would be getting a good rest on and almost straight up and down hillside. As I had plenty of time to set up and get ready for the spike out to come out from behind the pine trees out into the meadow, I dug out my tripod and mounted my 10 x 42 Swarovski‘s with my phone scope adapter attached and videoed the whole encounter and shot. Yes a little spoiler I did shoot.After I got everything set up in the elk appeared out from behind the stand of pine trees he has now gotten a little closer to 550 yards. I had been shooting all summer long and had my rifle dialed into 650 yards. I dialed my scope to 10.75 MOA, It called for 10.7, but my scope dials moves in .25 increments. From the time I started the video to the time I shot was about five minutes according to the timer. Are use my backpack and set it on a little lip that when the snow melts makes a slight bench on the hillside for my front rest. Since I was not able to get steady enough with just that I used my Walkingstick extend it all the way out for a rear support. I was able to get on the elk nice and steady, announced a fire in the hole, then I squeeze the trigger and washed that spike drop in his tracks. It was such a great feeling to finally put meat in the freezer that will help my family get through the year.
It took quite a long time to get over to the spike once I had shot him and watched him roll down the hill several hundred yards. I timed out from when I took a picture from where I was at to win I took a short video walking up to the elk. It took 55 minutes to cover 550 yards.
Matt

Once I arrived at the Spike elk, the side hill was just as steep as the rest of the mountain around me. It was going to be a challenge processing the spike on that hillside. For some reason I forgot my 550 cord or else I would have tied him to the tree he died near. Long story short I got the front and rear quarters deboned and in bags and then this week proceeded to roll down the hill 100 yards and stop. Then he rolled down another hundred yards and stopped. Luckily on the second spot he stopped I was able to quickly cut off the front and rear quarters and set off to the side. As I was nearly finished taking the front quarter off he decided to roll again. So for the third time I had to move all of the game bags and dear down the mountain. It ended up being a fun learning experience to say the least. I was able to get all of one backstrap, only half of the backstrap on the side that was facing me when I shot. It was a perfectly placed shot in my opinion, right behind the shoulder, it hit right where the backstrap meets the top of the rib. No follow up shot was ever needed. I did not pack the head out though, when he rolled the third time his entire body when it on top of his head, In a pile of blow down brush. It was a grand adventure, my five goats packed out all my camp and the entire Spike elk. More to come later on in the season, my family still has three elk tags to go.
Matt 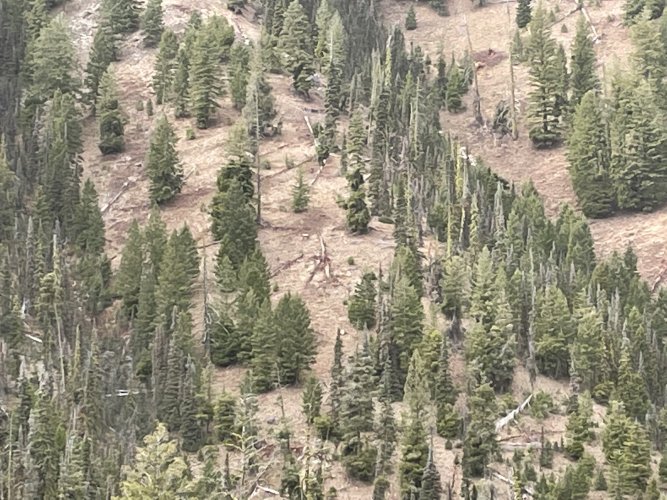 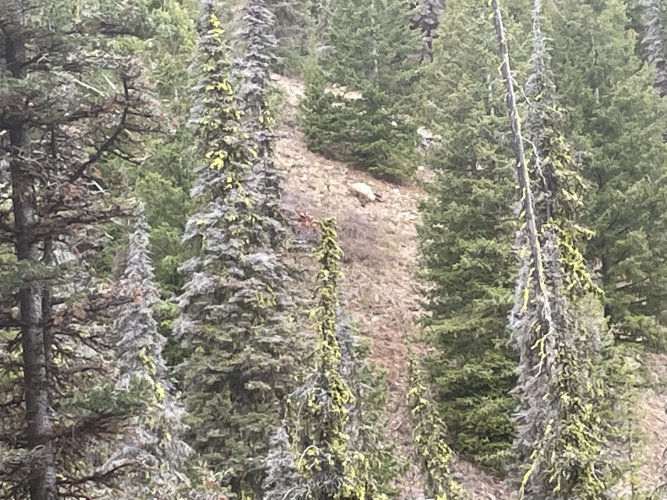 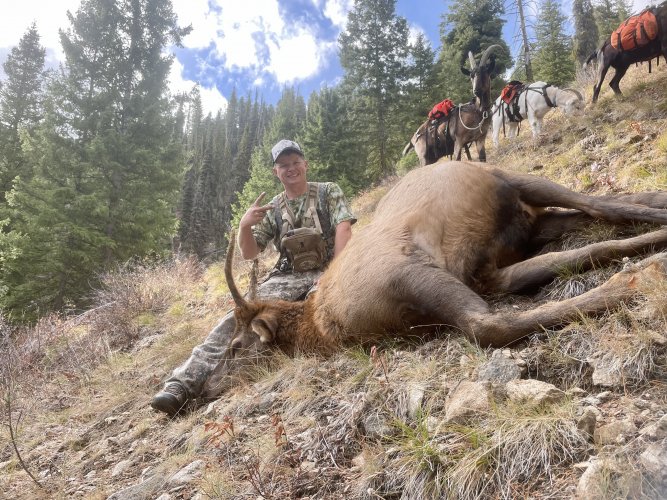 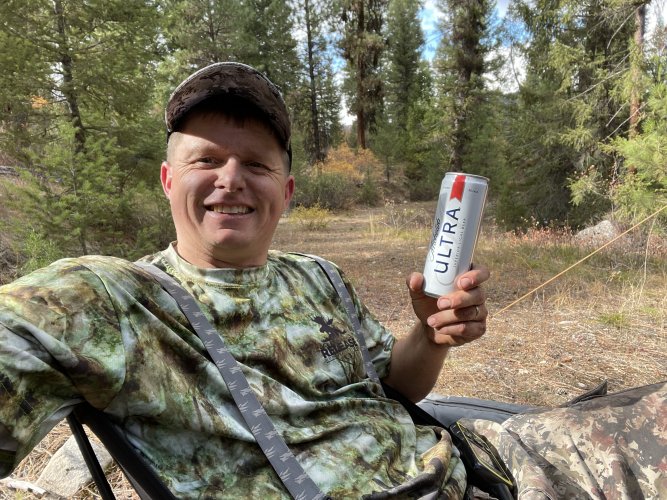 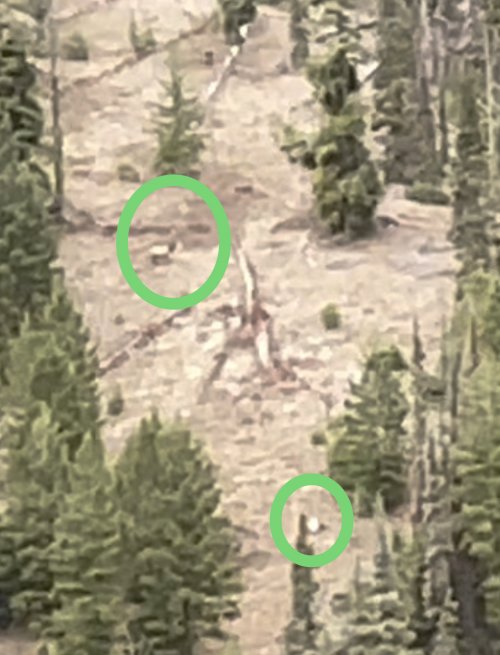 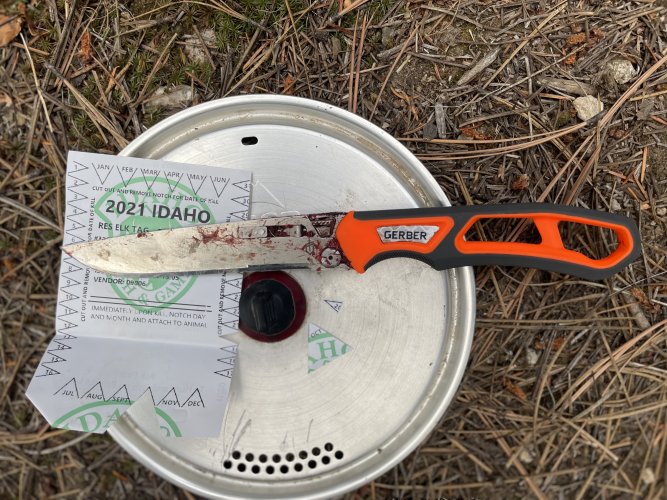 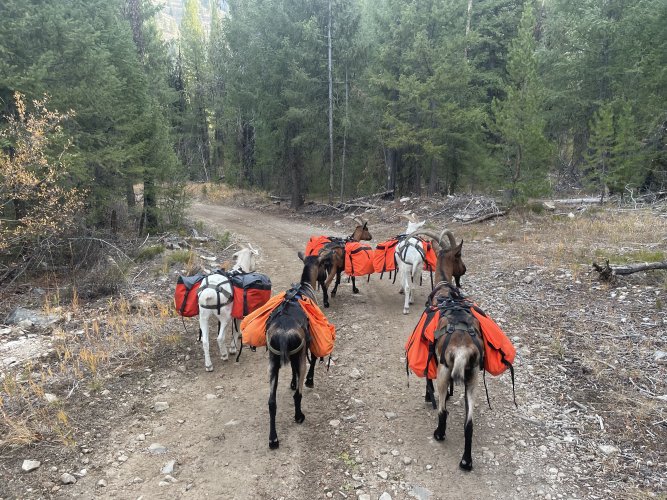 Awesome story. Congrats. Hope all your tags get punched this season!!

My guess is a boned out spike would be closer to 150.

Awesome Matt. Congratulations
I too wanted meat and notched my 26 tag on a Spike !! Haha

Great story so far Matt. Congrats on filling the freezer and great shot! Those goats are awesome!

Congratulations Matt. It always feels great to put meat in the freezer.

Great job, Matt. You're really on top of your game right now.

Yes a boned out spike, this one anyway was only 115lbs, that’s a fact. I weighed all bags. I’ve shot 4 other spikes besides this one and this one was by far the smallest in body size and/or meat weight I’ve ever taken. I also lost the front 1/4 of 1 backstrap due to shot placement/bullet fragmentation. That probably cost about 5lbs of meat. So he was around 120lbs boned out, again the smallest. The others were on the 150-160 lb range that I have harvested.
Matt

And if your interested, here in this thread I hauled a big bodied 6 Pt out with 3 goats

Awsome cant wait for the pics and story.

Thanks, I try my hardest every year. Only get so many seasons in a lifetime! And my season’s almost got cancelled for good at one point in my life. Gotta make use of what life I’ve got left, we always have that chance of leaving this world at any moment!
Matt

Yeah, I'm ruined Matt. I will be getting a couple of these lil fellas! They will fit right in with our funny farm. We need to plan a trip sometime.. great thread thanks for all the entertainment.

Tjd said:
Yeah, I'm ruined Matt. I will be getting a couple of these lil fellas! They will fit right in with our funny farm. We need to plan a trip sometime.. great thread thanks for all the entertainment.
Click to expand...

Get ahold of me, I have a couple spots left on my reserve list for babies this spring

Way to go Matt!!!
You must log in or register to reply here.