News release just came out. You have to harvest your sample and send it in. 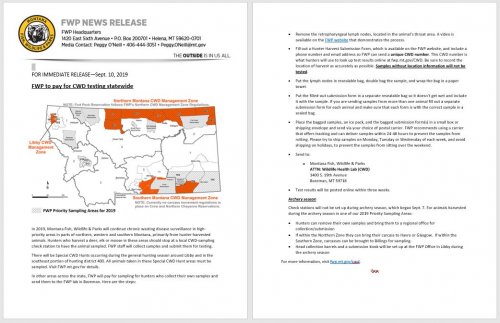 That's pretty cool. I was kind of shocked last weekend, as I turned off the highway to head up the Fisher River, to see a large blinking electric sign that said, "Entering CWD Management Zone."

Big hit to the “FWP is making money off CWD” crowd.

Samples from 25 deer harvested around the state tested positive for chronic wasting disease last week. The majority of the new positive samples were from animals harvested within CWD Management Zones, where the disease is known to exist.
Click to expand...

Two of the positive samples were from areas where the disease had not been previously detected. These include a mule deer doe harvested in hunting district 650 south of the Fort Peck Reservation, and a white-tailed buck harvested in HD 702 in Rosebud County. These two areas are adjacent to CWD Management Zones.
Click to expand...

This brings the number of positive samples collected this year to 91, including one elk and one moose.
Click to expand...

I think this is going to find that CWD is present in more places than previously known. Glad to see FWP is doing this. Anyone have any idea how much each test costs?
N

Really cool to see that Montana is doing this. I wish Colorado would do the same. CO doesn't make it super accessible and unless it's a mandatory unit you have to pay to get it tested. It also takes a few weeks for results.

Gerald Martin said:
I think this is going to find that CWD is present in more places than previously known. Glad to see FWP is doing this. Anyone have any idea how much each test costs?
Click to expand...

I thought I saw something around $15 a pop for individuals. I'm hoping FWP got a discount, but either way I applaud them for covering costs. I went to the R1 office Wednesday to have my buck lymph nodes pulled and sent in for testing. They're even mailing them from the office so all I had to do was show up. Pretty convenient.

Good info. Not sure if my processor submits any samples but I would have cut out the lymph nodes if I had know this earlier.
H

Mentioned this in another post.
Dont know if it is all possible, but devising a field test for the individual would seem the best way to track CWD.

CWD, coming to a town near you soon!
HD

Unfortunately, I don't think it'll be long before that CWD map is about twice as big

That's what you would think but it seems like it stays in hotspots. We have had it in Wisconsin forever but never within 4 counties of my area.

Glad to hear that Montana is taking it seriously. I think TX was a little slow to take it seriously and now it’s in three areas instead of one. Only one of the three seems to involve high fence operations. I have no proof, but I honestly think that the primary transmitter has been out of state hunters dumping carcasses when they get home. Here in TX I think it’s $30, BUT every time I’ve contacted a biologist and brought him a head it has been completely free of charge! I called a check station last year, and they weren’t going to be around when I could get there, so they have me a biologist’s number. It seems like all of the check stations on TX are private entities that collect samples for the state. I think they simply allow the people operating check stations to charge a fee so that they’ll be available 24hrs/day for the season. This year when I met the biologist he was sitting outside of a processor sampling everything that came in with a head. A GW was checking tags/licenses and antler restrictions. He didn’t charge me anything and I doubt her charged anyone else. I can’t speak to Montana, but I would guess that Game and Fish isn’t paying the same thing that individuals are. Hopefully not.

thusby said:
That's what you would think but it seems like it stays in hotspots. We have had it in Wisconsin forever but never within 4 counties of my area.
Click to expand...

But do you know how many deer get tested outside the zones? I do somewhat agree though. In TX they started testing quite a few deer throughout the state 4-5 years ago, and although it was found in some new areas, it wasn’t found all over, and the vast majority of the positives have been found within pretty small regions. The containment zones here are considerably larger than the area it has been found in.
S

What an unnecessary crock of caca. They will change NOTHING and just get some ill-informed hunters all wound up over nothing. SMDH. This shit is unbelievable.

Yeah probably here for good but I don’t necessarily want to eat an infected animal. I say we test everything that gets shot and add the cost on to license fees. That would give us a pretty good gauge of how it is spreading as well. Everyone can feel the pain this way.
C

sbhooper said:
What an unnecessary crock of caca. They will change NOTHING and just get some ill-informed hunters all wound up over nothing. SMDH. This shit is unbelievable.
Click to expand...

How about explaining the above comment of yours further.
S

Show me what they are going to accomplish by doing this. Nobody has ever figured out a way to control this nonsense. It is here and they just have to live with it. Pissing away more money "testing" for it, is a useless waste of funds. If someone specifically asks for it, then do it, but it will accomplish NOTHING to spend money on widespread testing.

People need to quit panicking over something that is not a big deal. Nature does, what nature does. It used to be, that when a deer, or whatever, looked sick, a person just avoided it. Now, it has a name, so everybody wants to panic about it. Until it got into captive herds, it was never an issue, although, I would bet 100 percent, that the disease has always been around.

sbhooper....I sure hope that you do not feel the same way with cancer screening of your loved ones?
C

sbhooper said:
Until it got into captive herds, it was never an issue, although, I would bet 100 percent, that the disease has always been around.
Click to expand...

I am not sure where you are getting your information, but in Wyoming there is only one "captive herd" and CWD was an issue in the southeast part of the state long before it got close to that captive herd which is in the north central part of the state.

CWD was first identified in a research herd of deer at Colorado State University in Ft. Collins, CO in the late 1960's. Nobody knows if the prion that leads to CWD existed prior to that.