Bhill552 said:
I live by the motto. A tired dog is a good dog. Seems to always hold true with my crazy one.
Click to expand...

I believe it. She and I were going stir crazy from stay home so much the last few weeks.

We had a heck of a run yesterday. Yesterday morning I trapped a coon that was messing with my chickens the night before. I had planned to run him with Mr. Brent’s hounds but he texted me that he couldn’t make late that evening.
I ran the coon on a large track of woods away from the house. Mostly pines and mixed stands of thinned timber and cut cover. Nothing worth hunting a tree dog in but good enough for turning a problem coon loose.

I left the coon in the trap and dropped him off a couple hundreds yards down a logging road where it crosses a drain. Sweetie was tied to a tree during that time and when she saw me carrying him she was not happy. Cut her loose and she made a b line down the road. I let her bay it a minute or two to get her fired up. Little nub was wagging the whole time. Then tied her back and let the coon go. 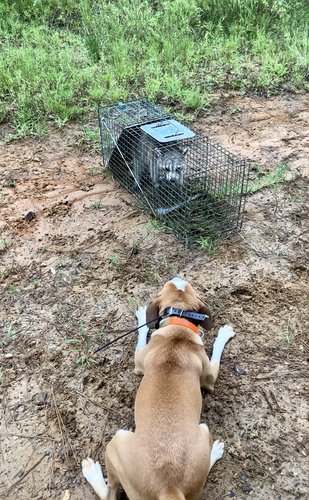 I gave the coon a decent heat start before cutting Sweetie loose. When she took off she ran sporadically through the briars and tall grass where we last saw him. I was scratching my head there wondering if she was going to pick up on him then when hit the patch of grass where he turned and I last saw him she opened up with a few barks. She smelled him. Then heard her cross the drain which I never heard the coon do so I had my doubts about whether she was really on him. But she stayed on that side of the drain working it.

She kept on while I kept an eye on the GPS distance and direction from her trying the keep up. After awhile I thought there’s no way the coon went this far. But I let her keep on. I’d say about 4 times she barked on track. Honestly I wrote it off as her excited or frustrated at the time but in hindsight I believe she was barking on scent. Then at 70 yds away GPS said she was “on point” and was finally about to close some distance. At 35yds from her I stepped through an opening. In front of me was a big tall patch of briars and I could hear Sweetie on the ground. Then heard a solid THUD of the coon falling out of the tree which lead to a series barks snarls and even a few yipes from Sweetie.

I tore through the briars as fast as I could. Lost my good hat in the process. When I got to where I could see them Sweetie had it bayed. She kept her distance for the most part, which at her size I’m glad, and the coon stood his ground. The vines and briars were so thick that I’d have to crawl in the grab Sweetie but in doing so would probably bump the coon. She did her job but now I wanted to her out. I tried going through on another side but it was even thicker. Decided then to call her off and hope she listen without having to make a negative response like a shock or “leave it” command.

Blew the whistle, called her to come. Did that a couple times and she backed off. She didn’t come immediately back to me back gave the coon some space. He left and the heat died down. I walked around to where I could see. She still wanted to go in his direction but a few more calls and she came to me. Patted her up with with a lot of good girls. Don’t think she cared though. She wanted that coon.

Marked the spot then we went back to the truck. When I went back to get my trap I looked at the pin from where we turned loose. It was 400 yards as the crow flies.
So many times I’ve doubted her when she’s on something, but then times like these she proves to me that she knows what she’s doing.
Last edited: Jul 31, 2020
You must log in or register to reply here.
Share:
Facebook Twitter Reddit Pinterest Tumblr WhatsApp Email Link
Top