"I'm calling to see if you would be interested in a potential mountain goat hunt in a few weeks?" "Please call me back by Friday." That's the message from CPW via voicemail a few weeks ago. Guess the day might get exciting after all. I returned the call and got through after a few attempts, and the phone call revealed that there was the possibility of a last minute special management hunt in an area where mountain goat populations have been expanding. Dates were still uncertain, but the area was one which I had never been in. The goats were about 8 miles from any trailhead, uphill both ways as the story goes…

Phone calls to buddies went out shortly thereafter. Planning was fast and loose, but from the onset I figured we’d ride in on mules and horses. We ended up with 5 friends and 7 animals lined out for a pack trip into the backcountry. A few folks would remain in camp and take care of the animals, fish, and wander around the woods enjoying the solitude. The others would hunt.

CPW mentioned in the phone call that this would be a last minute hunt. I got the actual confirmation to go get my tag on Tuesday before the Saturday season open date. I stopped into the CPW office on my way home from work that evening, completed the required paperwork, paid the fees, and walked out with an either sex mountain goat tag. The plan was to pack in on Friday and hit the ground running Saturday.
K

Got one of those calls a few years ago. Congrats and get after it!

Congrats!! Definitely be following along

Nice. I didn’t know if they ended up issuing any licenses.
B

Funny when those goats end up in the harvest report and you're trying to match up the location which isn't even close to the unit it says it's in.

Friday came quickly. A couple of us hauled animals from Junction and we met the rest of the crew at the trailhead. Introductions were made and we got the animals tacked up and loaded. Hoping to be on the trail by noon, we left at 1. Not too bad. 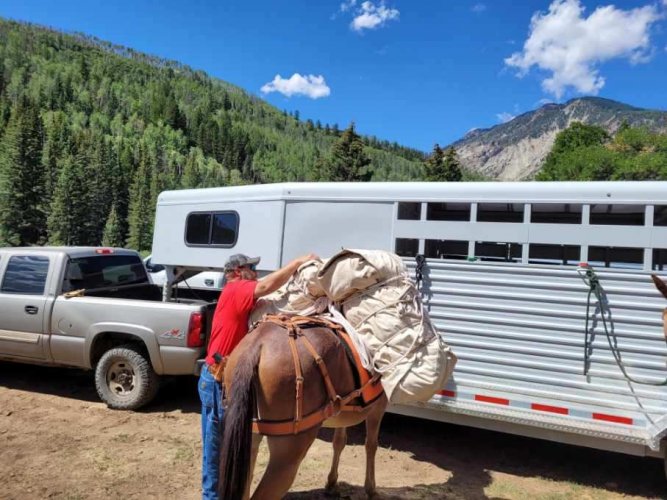 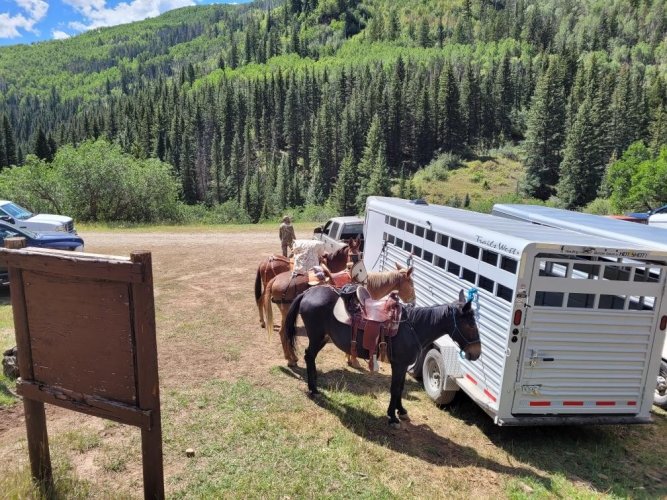 The animals did well on the trail, no rodeos and no wrecks. 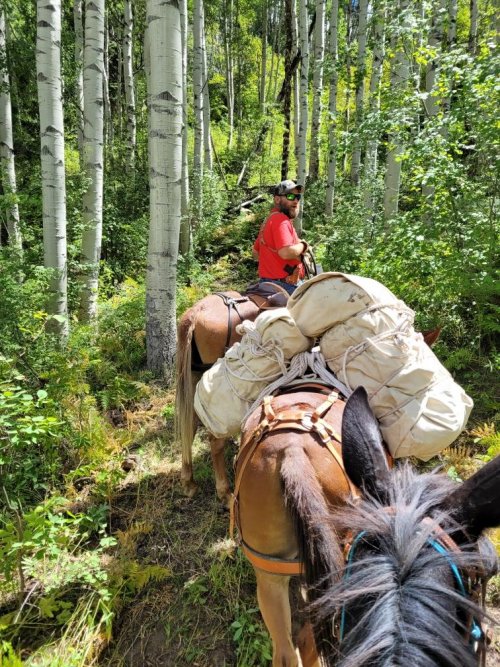 We stopped to rest in a park about 6 miles in and did a little glassing. Within about 3 seconds, goats were spotted all the way on the tops. First there were four. Then there were 3 more to the south. 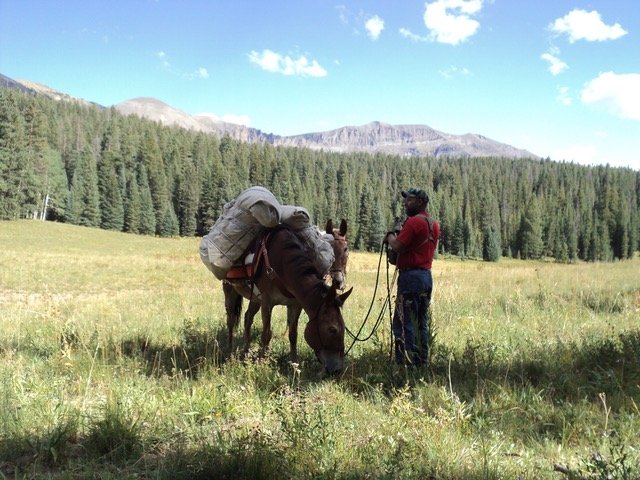 With daylight waning, we rode into the timber to find our camp about a mile further and get set up. By the time we were done setting highlines, tents, etc; sunlight was gone and we would have to wing it in the morning. 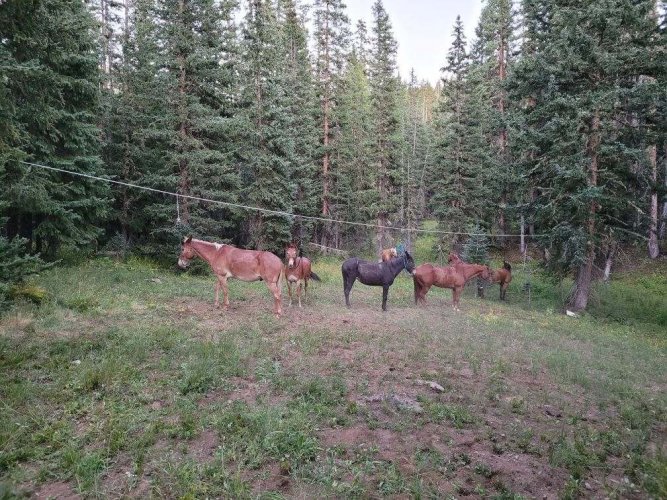 You have some good looking stock and equipment.

I slept like crap that night. Just never did fall into a good sleep. But neither did anyone else I guess. 3 of us left camp at daylight to find a glassing area to locate some goats. We thought we would catch some windows through the timber, but this place was thick. After about 2 miles through the timber and deadfall, we reached an area where we could get up the cliff bases above the trees and glass. There they were, the same goats as yesterday, about 2 miles away and a long way up. One buddy decides to climb a bit higher up the hill to glass, and almost immediately calls down, “Three goats down low. Only about ½ mile away. We gotta go”.

A scramble down the slope and back into the timber, we work our way around to where we think we can get above the goats. We climb and climb, and after climbing some more, realize we are not in the right spot. We came up a ridge too early. We can see where the goats were at, but they are no longer there. And it’s too far anyway, about 650 yards. Scramble down or go higher?

We’re pretty pooped at this point, and decide to climb a little to a good glassing spot and grab a bite. As we’re sitting there, several goats emerge from the crags and disappear just as quickly. They are over where the low ones were at, but closer. The cliffs are deceptive, there are canyons and crags and cuts. A million places to hide. We think they may come across the cliff face in front of us. But we realize that the cliff in front of us hides a crevice behind, which the goats disappeared into. 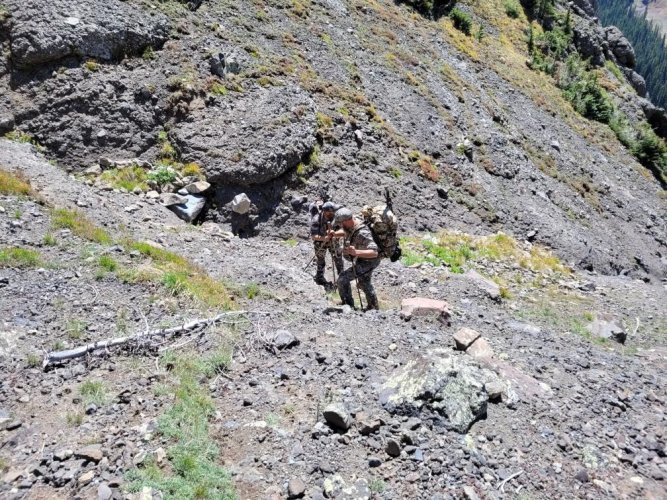 We go higher, not sure if we’ll be able to get above them or not. About ½ way up the legs just need a break. The cliffs are steep and the footing sucks. There they are, the goats pop up out of nowhere on the ridge above us! 400 yards. I scramble to find a shooting position. The ground gives way under each step and rocks slide down the hill. Finally, I end up standing in a cut with the rifle supported in some low shrubs at shoulder height. Pretty janky but solid. One goat stands and looks straight at us. A mature goat and a clean shot. Crosshairs settle on a perfect frontal shot, and the 6.5-284 (non-manbun) barks. A quick succession of two more broadside shots, and the goat disappears behind some trees. The shots felt good. The setup felt right. One buddy caught it all in the binos and says “goat’s piled up in the trees”. Hearing no rocks crash, I hope that’s the case. We can’t see it.

We begin climbing again. Need to go up up up and around the crevices, and then come down. About an hour elapses as we work our way around. 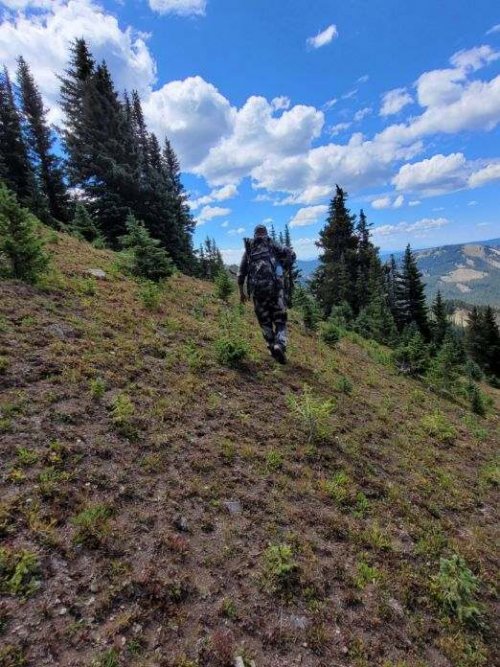 Closing in, there is a white spot in the trees, about 20 feet from the cliffs and crevices. And there she lay, unquestionably the most pretty animal I’ve had the privilege to hunt so far. 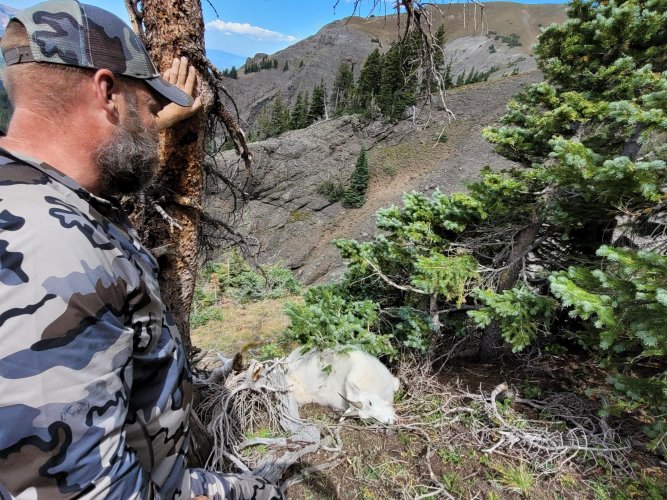 Photos and smiles all around, and confirmation of one buddies prediction that we’d kill one opening morning. 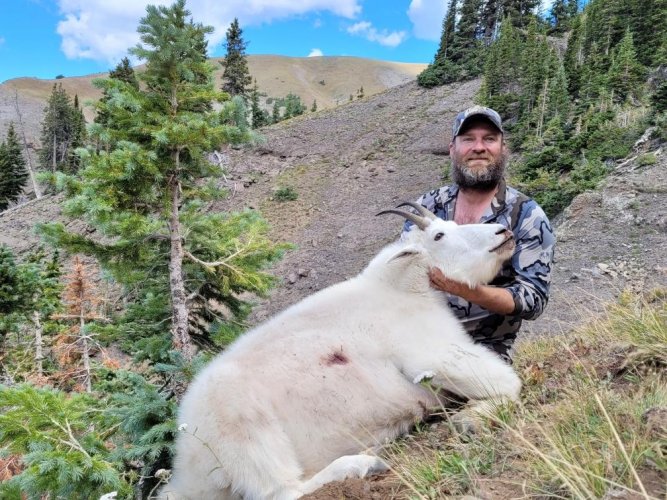 We have the goat skinned, quartered, and packed in a pretty short time, and we’re on our way with plenty of light to make it off the mountain and back to camp. 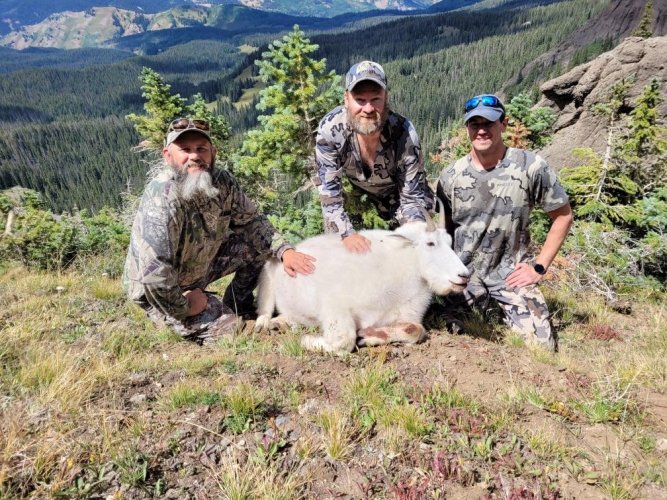 We get back to camp with an hour or so of light left. Someone had the foresight to load a 12-pack of bud light in on a horse. Like it or not, a cold bud light after a day like that hits the spot. We packed out the next day, with zero drama, wrecks, or rodeos. It makes for a shorter story, but a hell of a start to the 2021 season! 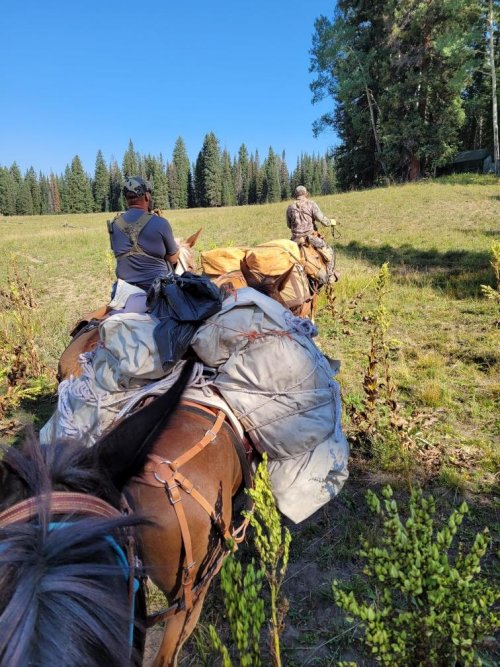 Footnote...who’d of thought the dang goat would taste so good. Delicious. 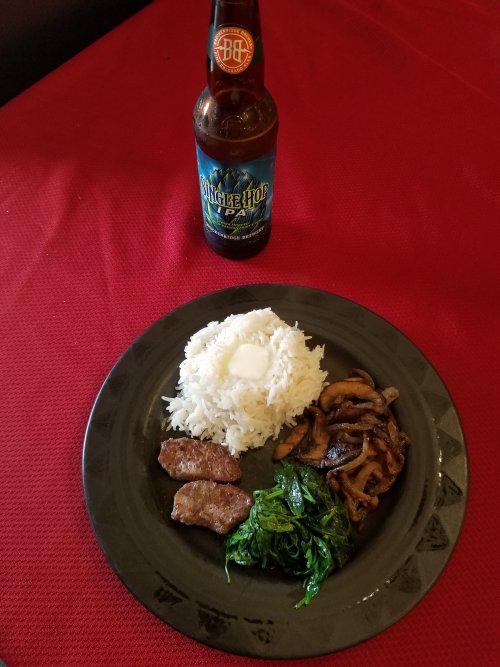 Footnote #2: Amos Moses, the mule who left us hangin’ last year, has found a home where his owner can work with him daily. And he has exceeded all expectations. In his absence, wifey bought another mule I dubbed “Pancho”. He packed for us on this trip and is quite good. The ornery mare from last year is preggers with a mule baby, so I’m not allowed to use her for hunting. And I’ve tried, but I am not allowed to name the baby mule “Lefty” which was the whole damn idea. Guess we’ll have to buy another mule.

Wow, what a great recap, thanks and congrats...

Great job. How many goats did you see in total?

Thanks. Over the short time we were in there, over a dozen. Some were miles off, but we saw more than I expected.
P

Awesome! And just like that it's over. Not gonna lie I was hoping it would take longer so we could follow along longer. Haha

Awesome adventure thanks for sharing congrats!
You must log in or register to reply here.

Mountain Goat - Cape care from the shot to the taxidermist