I went back and forth on whether I’d post this on this forum, but it just felt right! I still have a lot of connections to this place and there’s also a guy I previously didn’t know, helped me out tremendously! I’ve killed a few “good” bucks but never anything I would consider BIG. That changed over the last week.

First for the boring back story- When I started putting in for Colorado, I didn’t even bother getting deer points. I’m an elk guy, or that’s what I thought. After a few years I figured out how stupid that was and started getting points. I didn’t want to build points and hold onto them forever though. Through my research, I kept coming back to the same unit. I even had people try and talk me out of it, saying that place isn’t what it once was. It didn’t matter, this was a bucket list PLACE, more so than a deer hunt. I also knew second season was a gamble, but other seasons took a stupid amount of points so I decided to go for it.

The good part-my buddy Channing came and joined me for the first few days of the hunt as we tried to figure this place out. We marked places off the map and figured out where some deer were, including seeing a GIANT two point that I passed. After that, a snow storm and cold temps hit. It’s a blessing for a second season deer tag! I was seeing multiple bucks every day but couldn’t find any old deer. On day 6, I passed a 170” type deer. The biggest I’d seen. After that encounter, I was satisfied with my hunt. I knew I came here, experienced it all, found some good bucks, and that was fulfilling to me. Day 7 I had to go back to town to refuel. Driving through the unit, I found this buck at 1:30 in the afternoon, on his feet and in a place I had just hunted 2 days earlier and not seen a single deer. A quick loop around put me above him about a half mile and the stalk was on. I watched him disappear into some tall sage and figured he bedded down. I crested a hill 260 yards from him, and he saw me before I saw him. Not good. What gave him away was his head whipping around to look my way. I got prone over my pack and tried to kill him in his bed. I missed!!! Luckily he just stood up from his bed and didn’t bolt. I sent another round and anchored him right there. The freak out, the emotional dump, and walking up to this buck is a moment in time I’ll never forget. 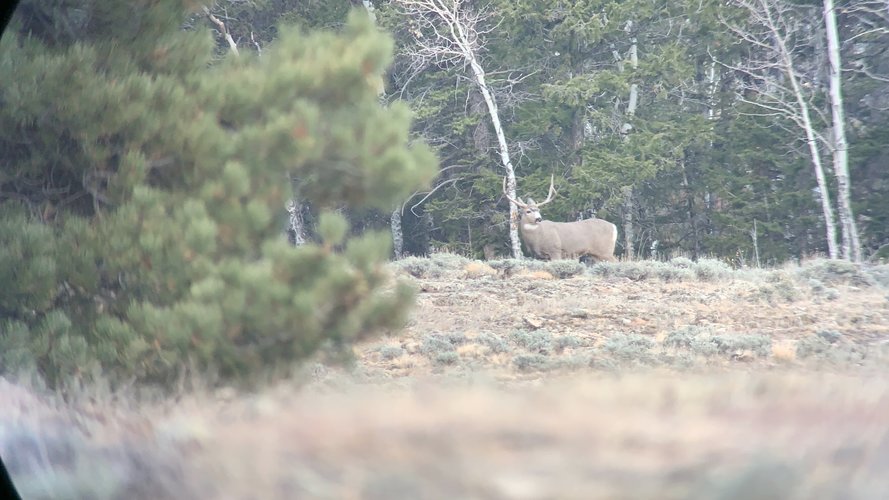 Sweet buck. Freaky cool antlers without looking like a full on mutant. Nice call on the Willie's too!

Wow, what a deer! Good work and way to stick with it!

I'd have a hard time passing on that forkie!
N

Nice buck indeed! You gotta give me the coordinates on that giant two point. That's a dream buck for me!

Awesome buck. I am in a similar situation, finally cashing in my points on a 3rd season tag in a unit that everyone says "is not what it used to be". This post gives me some hope.

Awesome deer and a great hunt.

bigsky2 said:
Awesome buck. I am in a similar situation, finally cashing in my points on a 3rd season tag in a unit that everyone says "is not what it used to be". This post gives me some hope.
Click to expand...

Grind it out! Send me a PM! We may have been in the same area. If we were, I’ll pass on what knowledge I have!

That's what Colorado Mule deer dreams are made of!

Wow that buck is cool.. Congrats

Hot Damn, that is one cool looking buck. Congrats!

Congrats on a great buck! I’m in a similar boat. I’ve killed plenty of good respectable bucks but never a truly big buck. That’s a pig you got.
O

Once in a lifetime buck. Definitely Big Hank. Congratulations man, soak it in. I love mule deer

Cool buck!
You must log in or register to reply here.