Examples of elk absorbing shots and not acting hit?

Had a couple with 140 grain and 160 grain accubonds act like they weren’t hit 3-4 times. Still died within 30-50 yards but not much reaction. This will probably get people riled up but since I’ve switched to bergers elk have gotten that sick look as soon as they are hit. Only can remember ever shooting elk twice with a Berger.
T

First elk I shot was a cow at maybe 60 yards with a 270 Win, 140 or maybe 130gr SST, I don’t recall. Hit her first right behind the shoulder, just acted kinda confused. Second shot she twitched just a bit, but still just kept moseying down the hill. I can’t recall if I shot a third time. At this point my buddy starts blasting at the other cows, (missing every shot) and I’m watching my cow through the scope pour blood from her nose and mouth. I had no clue how inappropriate (IMO) the SST was for elk. We did gutless so never actually opened her up, but there sure was a lot of slopping around noises going on. 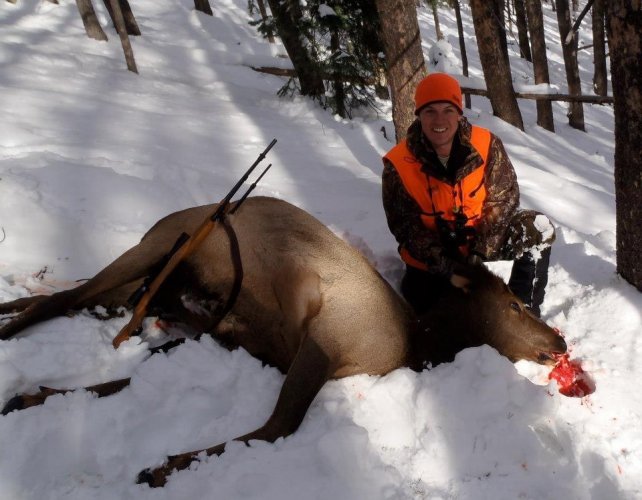 One of my favorite hunts.

Just completed season 55 with a spike bull, a quarter away shot that broke the rear leg at the knee and transected the chest cavity exiting the brisket. The shot spun him, he fell down but his head came up so I hit him between the ears before he could get up. Right at 400 yards. Not my best shooting, not sure which one of us wiggled but it worked. 338 Jarrett/250 grain Accubond. Shot my first bull a couple of miles from there in 1967. 30/06; 180gr Partitions. Bayonet distance. Broadside through the heart. Big chunks of heart blown out through the exit wound. Damn bull went 200 yards through heavy timber. I’ve had a couple drop at the shot without a CNS hit but only a few. Like others have pointed out, I keep hitting them until they fall if I have a shot. If seen them shot with 243s and 257 Roberts, etc even a 6.5 creedmore. They die when well hit, just takes a while sometimes.
We’ve been pretty effective over the years at filling out tags, I’m convinced elk deserve their reputation as a bullet sponge…..
Every shot must be followed up, if they don’t go down, show evidence of a hit you simply must go look and try to track him, even if it takes 45 minutes to drop down and climb back up to where he was. Over the years we’ve found several bulls in the bottom of the draw between us, that showed no evidence of a hit at the shot.
Last edited: Oct 31, 2022

brockel said:
Had a couple with 140 grain and 160 grain accubonds act like they weren’t hit 3-4 times. Still died within 30-50 yards but not much reaction. This will probably get people riled up but since I’ve switched to bergers elk have gotten that sick look as soon as they are hit. Only can remember ever shooting elk twice with a Berger.
Click to expand...

Two of the Elk we got this week were with Bergers. (7mm) One went down pretty quick, hit in the crease. The other didn’t cooperate as much, hit first on the shoulder it pretty well exploded the shoulder the second shot went into the chest, that finished him.

One of my favorite subjects. I will leave it there.
M

Talking to me? mtmuley
B

My pet theory is sometimes, particularly on flatter ground, elk just lock up their legs and it's hard to tip them over. I saw one raghorn bull take two full magazines, one from a 30-06 and another from a 300 Savage at about 50 yards, before it finally gave in to gravity. Dead on its feet. I don't know how long the thing stood there but if felt like forever. My buddy thought he was missing. His boy (with the Savage) just got excited. I am a strong believer in follow up shots on elk but that example was a bit overkill.

Rag horn bull took 2 7mm mag bullets through the heart and still took off and made it 100 yards or so.


Also seen a 5pt take 5 270 rounds at 60 yards and just stand there until he tipped over dead.

Watched a nice 6x6 take four 7Mag rounds in a tight little square behind the shoulder, only to run a quarter mile up a mountain to die and pushing his cows ahead of him the whole time. Tough creatures.
M

Sheltowee said:
Watched a nice 6x6 take four 7Mag rounds in a tight little square behind the shoulder, only to run a quarter mile up a mountain to die and pushing his cows ahead of him the whole time. Tough creatures.
Click to expand...

Double lunged a bull with a .50 roundball. He just stood there as I (maybe frantically) started jamming another down the barrel. Thought I had to have clean missed. As I got the rifle primed, he started trotting, only to make it maybe 50 yards before tipping over. One death throw and that was it. Felt like an eternity.
P

The first two shots were called misses, and then we found four entrance wounds, all in the kill zone.

That is kind of the point. We are hearing stories from all calibers… It is crazy what an elk under certain situations can take… In most of these cases the elk are just extreme…

Tonight watched a cow take one 200 grain accubond behind the shoulder from a 300 rum at 325 and tip right over. Then the next cow beside her soaked up 4 of the same before tipping over. Goofy critters
Last edited: Nov 4, 2022

Roosevelt bull in my avatar. Hit him with a 270 wsm 130gr TSX from 280yds broadside. First shot double lung. He just stood there like nothing happened. Had heard a good hit though. Second shot, the excitement got the better of me and hit a little back and got liver. Still just stood there like nothing happened. Third shot I decided I needed to anchor him and hit through both shoulders. Dropped like a rock! All three bullets were perfectly expanded and found just under the skin on opposite of entry wounds.

Threads like this make me wonder if I missed on my AZ elk hunt. The one big difference is that most people in here found an elk within a reasonable distance. I searched for many many hours and never found blood or hair. I have to assume I missed.

I shot a cow elk several years ago with a 25-06. 2 shots through the lungs at just over 200 yards if I recall. I watched her for a couple minutes while she passed. She stood the whole time. That’s the only time I’ve seen an elk not drop.

I guess I expect it all depends on the specific elk and how exactly they are hit and how much adrenaline they have?
G

mtmuley said:
I've had antelope not react. With a RUM. It ain't an exact science. mtmuley
Click to expand...

I shot an antelope buck last year 4 times through the shoulders with a 338 rum before he finally tipped over. Couldn’t believe it. I have a witness.

geewhiz said:
I shot an antelope buck last year 4 times through the shoulders with a 338 rum before he finally tipped over. Couldn’t believe it. I have a witness.
Click to expand...

Quit using Bergers.
Just kiddin. Couldn’t help myself.
Iffin your speaking the truth, that’s damn amazing. What bullet?
BTW, I’m not calling you a liar, just can’t tell if you’re being serious.
You must log in or register to reply here.