Here are the conditions I have faced the last couple years. During the last couple weeks of the season, with a couple feet of snow, I have had an elk down about 5 miles from the truck. Solo. I want to keep this place a secret, so calling anyone to help is out of the question. I am in an area where there are a couple old logging roads that lead back to the truck and also an old game trail…

Here’s what I did this year… I shot my bull this year in the afternoon. I quartered him and packed out one hind along with the extra meat down to the truck that night. I went and bought a cheap sled and came up the next morning… the sled thing didn’t work out as well as I was hoping. The quarters were too big and high, even when tied on, they kept falling off. I also took the old game trail (which is a much shorter distance) but the entire sled because of the weight would slid off the trail, as most of it is side hilling. It was a long day.

A game cart would have been useless in the snow, too rugged of terrain, too deep of snow, and some hard windblown snow that I post-holed through. My only other thought is buying a deeper game sled but I’m skeptical after that lackluster cheap sled experience… If I did go the game sled route, I would probably drag it up there during the summer and stash it, I know the legality of that but it seems to make sense…. Leave it there for 2-3 months and then it either comes down with me with an elk in it or empty the last time I head up there.

Any other ideas to get these buggers out more efficiently/easier? Or is it the game sled idea or 4 trips with a quartered elk on my back?

I suggest getting some Pack Goats! or hit the gym fairly hard..... hope you were boning the quarters out also would save weight..
Matt

Can you rent/borrow/buy a horse?
B

My experience with sleds is the same ... I hunt steep, thick country and am either getting run over or pulling the sled through debris up hill. Only thing I can think of is to have friends you trust. Just one or two buddies make a pack a whole lot easier. And safer.
L

Not judging your way of thinking, but sounds like some pretty harsh conditions that could easily result in a serious situation. No one knows where you are going ? What if you had a situation where you needed help (or rescue)? Where would your family know where to start looking? As Ben Long suggests try at least one friend that you can trust. I know it is done all the time, but hunting alone is asking for trouble- Too much can go wrong.
S

You break a leg back there in the boonies, 5 miles from a road....you can die real quick. Rethink keeping the spot so secret. Tell ONE friend. I'm too old to hunt alone.
J

Laelkhunter said:
Not judging your way of thinking, but sounds like some pretty harsh conditions that could easily result in a serious situation. No one knows where you are going ? What if you had a situation where you needed help (or rescue)? Where would your family know where to start looking? As Ben Long suggests try at least one friend that you can trust. I know it is done all the time, but hunting alone is asking for trouble- Too much can go wrong.
Click to expand...

My parents know where I go, they are in their 70s. My wife has also been with me where I hunt, and she knows where I am.... Unfortunately, my friends are either way too out of shape to be of any kind of help or they are very intense hunters, like myself and I don't want to put us in the situation.

Get a horse or find some friends.
S

Number one is to bone out the quarters. There is zero reason to haul out the garbage. Take out the back straps, tenderloins and whatever you can carry on the first trip. The sleds work well in snowy, moderate country, but are problematic under rough conditions.

If you don't trust anybody, and have no access to pack animals, then you are stuck carrying it out on your back. Unless you shoot a monster bull, it will not take many trips to get it out. I have carried out mid-sized bulls in three trips and that was because of the antlers. A cow or small bull, boned out, can come out in two heavy packs.

You have me beat on the miles, though. The farthest for me is 3.5.

I do the same thing as you, haul back one load in my pack, then come back with a sled. I use a ice fishing sled though, it's way deeper than a kids sled. I know I saw a freshtracks show a few years back where randy was pulling the same sled up on a hunt, I think it was one of his Colorado elk hunts.

I have a rope on the front, and the back for down hill. It can still be a pain getting it unstuck sometimes, but better than walking through snow with a 100# on your back. The few times you have a open hill that you can ride it down on top of quarters makes it worth while.

How about a jet sled for ice fishing on a home made cart with ski's or old snowboards to slide on?

I used an el cheapo kiddies red torpedo sled once. Drilled holes in the sides and tied 2/3s of a boned out bull into it. Very heavy fresh snow, had no wrecks in around that same distance - it was great. I think it was due to good snow conditions.

You are smart. Best to make 4 crap trips alone than one with 3 untrustworthy pals. Very few folks I'd want helping me pack out an elk, and the majority of them live in my house.
S

What I did was marry an awesome woman with an 11 year old son, then waited till he was 20 years old and could pack out all of our animals.

I am kind of dreading the day he moves away and I find myself in your predicament again.

I have used sled in the past with some success but only with a good sled and if you don't have to deal with any sort of side hill or downfall. The logging road you mentioned might be longer but it might be worth a try.

Ice fishing sled has some pretty good grooves in the bottom, so in snow it should help keep it from side sliding. Plus the sides are much deeper. I have also bolted some steel on the bottom for extra side sliding protection. I would think this would work for your situation.
John

I bought an orange plastic sled with sides about six inches high. I drilled holes down each side and tied on paracord ties that lash across and tie in the meat. A boned out elk would likely be only one trip, but a larger cow or bull likely two trips. I have pulled a quarter, with other meat in my pack and leap-frogged the sled containing the rest of the elk. It still equated to two trips, but worked well. Luckily I had been optimistic about finding an elk, so had pulled the empty sled in with me when I hiked in. There was a lot of snow, so it was pretty easy.

It took six trips with the orange sled for my moose, but fortunately it was only a mile to the truck.

Get a bigger sled and a big heavy duty game bag that won't tear if you brush up against a tree. They are made of heavy plastic and I think they run $50 if you can't find one at a garage sale. Drill holes in the side of the sled to tie ropes to. You can thread a rope through the holes to have easier tie point if you want. Put a section of flexible pvc on the rope handle to make it easier on your hand to pull.

I don't even worry too much about boning or skinning the legs... It helps on dry ground too.

I've done 6-8 this way with no problem although going down a steep hill can be a challenge. You can supposedly add drag for going downhill by tying ropes with knots in them and let them ride under the sled. A second rope farther back also helps. 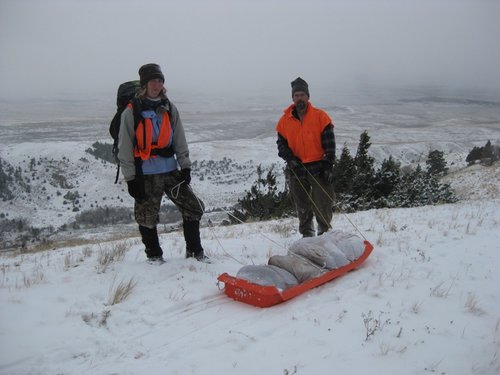 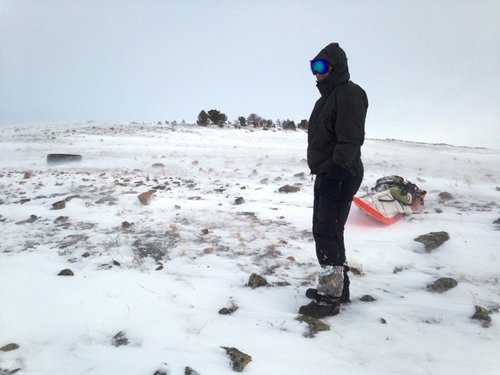 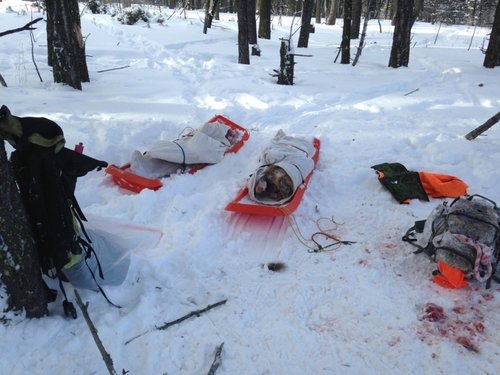 Even better is a sled made for x-country skiing with a waist strap. I had great control going downhill even with 170# of meat in it. It has fins underneath to help tracking on sidehills. 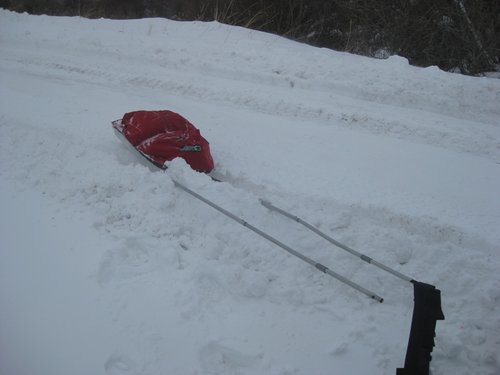 They make sleds for ice fishing but they are short and deep... a longer one will float better over the snow.

Not sure if you could rig a big rack on a sled so that might have to go on your back.

I've done the el-cheapo plastic kid sled once - and it worked out fine. We mainly traveled on a well used Forest Service trail, so we didn't run into side-hill issues on that trip (2 bulls packed out that time, roughly 6 miles).

I also did this once - mainly to scratch an itch I had. It side-hilled very well actually, pulled nicely. It was a 3 mile pack out on that trip. It did tire the forearms and shoulders, I probably won't do it again. 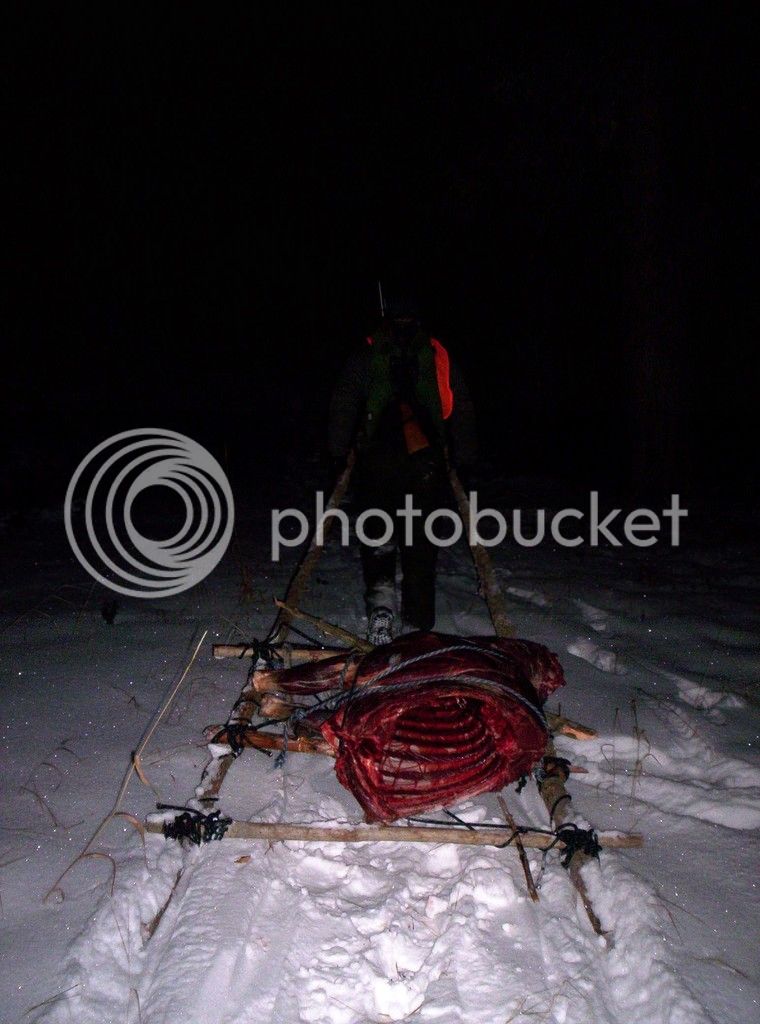 I've been thinking about getting something like this sled but haven't ever used one.

I would think a decent sled and maybe using snow-shoes on the old logging road would be as efficient as hitting the old game trail. Longer route - but easier going.

I think you are smart to keep it limited on "people who know". You've got your safety base covered with some people knowing where you are.
Last edited: Dec 22, 2015
1

This is the only game cart I've seen (never used) that I think could work on side hills.
http://www.neetkart.com/
Be forewarned, they aren't cheap.

llama
You must log in or register to reply here.

T
Never have I ever…

You can’t make this up elk hunt gone wrong
2