I have been VERY slow in posting about the 2019 hunting season at the Busch house. The theme of 2019 was very quick and easy hunts, with fewer pictures than normal (this was remedied in 2020)!


The first hunt of the year was Colorado muzzleloader antelope. Before I even turned off the county road opening morning, I saw this buck with a large herd of does. I parked on the side of the road and made a stalk getting within 90 yards. My muzzleloader had a bit of a trigger malfunction and I had to work on it without the herd noticing me. I got the muzzleloader working and made a decent shot at a hard angle. Two good outcomes, I harvested a nice antelope and bought a new muzzleloader. 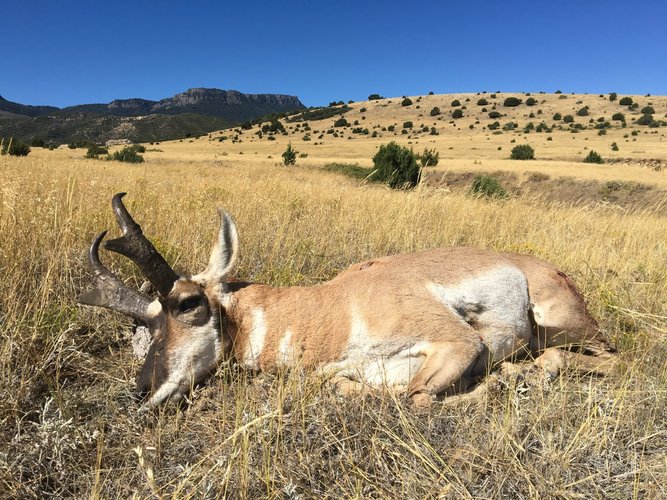 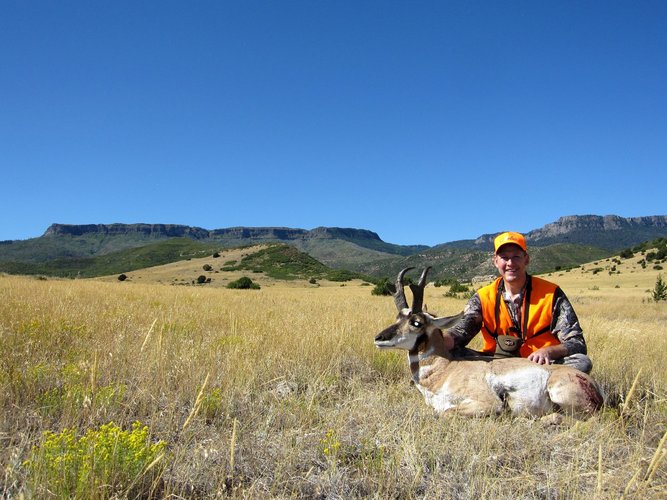 Next was South Dakota antelope. I had driven up to scout the unit twice and felt like I had some good bucks located. Again, on opening morning as I was driving to my spot, this buck crossed the road in front of me and into the prairie. I watched him chase does for a bit and figured out a quick stalk through a few rolling hills and sage. I felt a bit guilty when he and his does walked into my lap at 35 yards. The 7MM Remington Magnum was more than adequate at that range and I had another good-looking antelope buck. My wife also had a tag, but decided relaxing in a hotel room for the rest of the weekend sounded like a good idea. I wasn’t about to argue with her, as she has some great ideas! 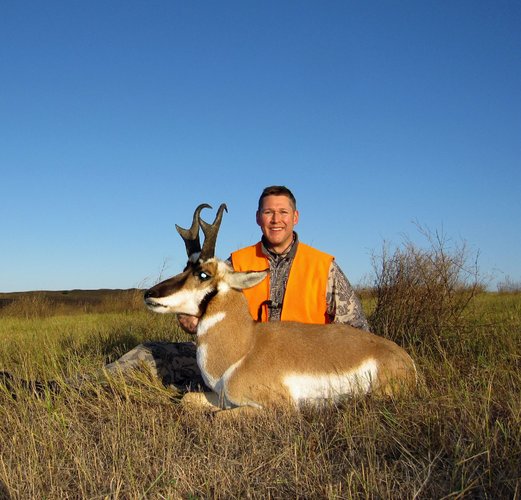 I was fortunate to spend some time scouting for sheep with Khunter on Hunt Talk who had drawn a great tag in Colorado. Finding sheep was no problem at all and watching rams is never boring. Kirby and his brother stayed with my wife and I just before his hunt started to do some last minute scouting. I hope everyone on Hunt Talk is blessed with the opportunity to spend time with these two, learning the finer points of making a great margarita and absorbing the extensive reservoirs of wisdom possessed by both! 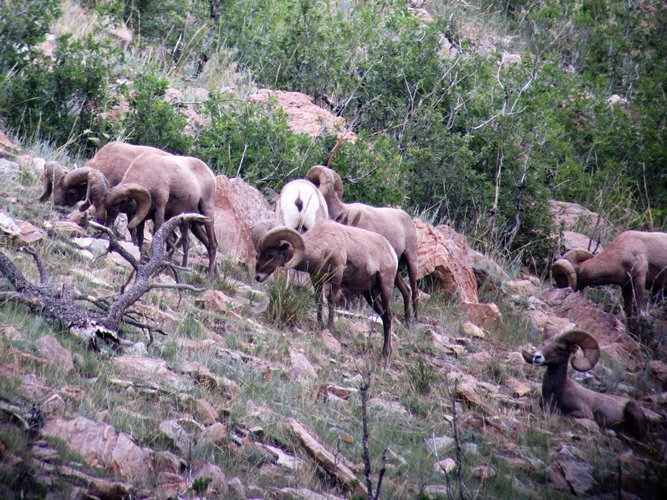 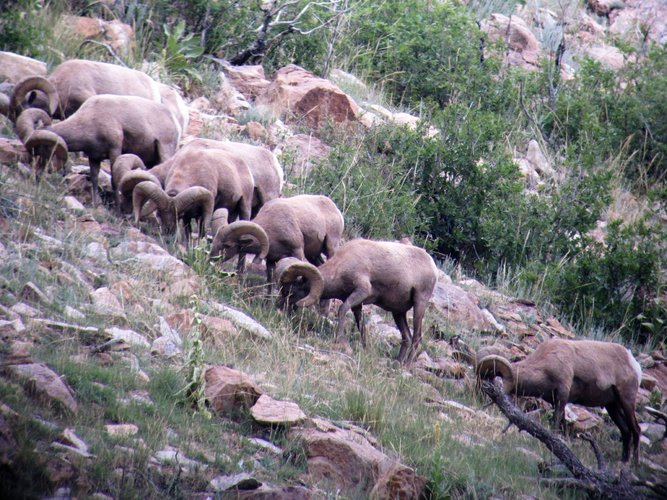 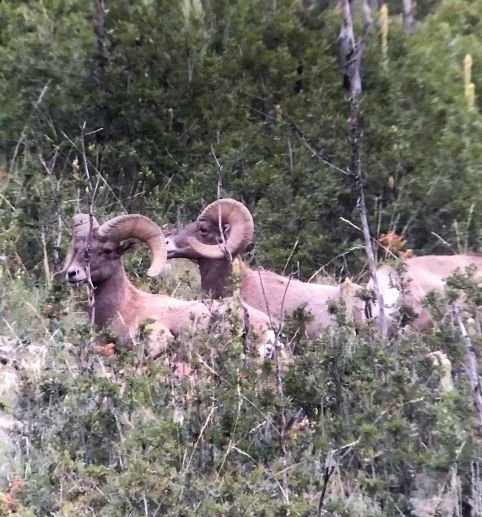 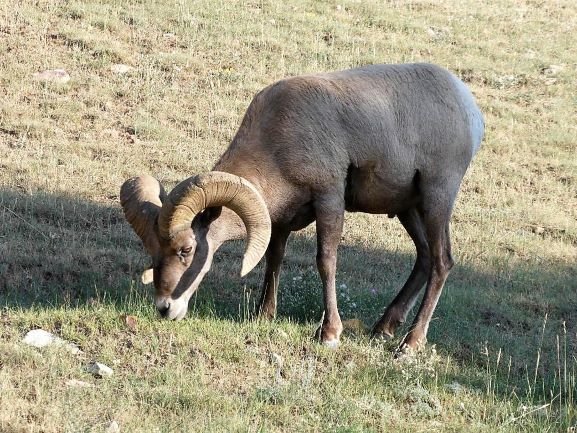 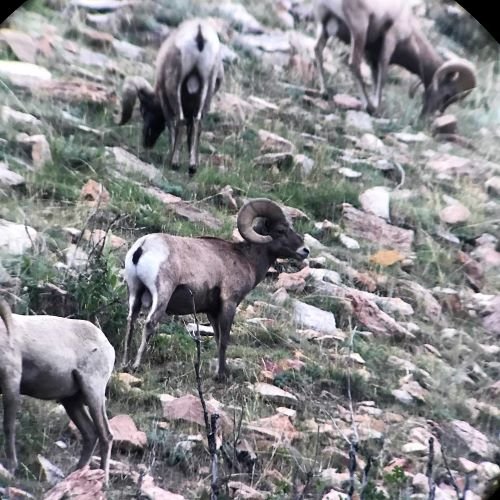 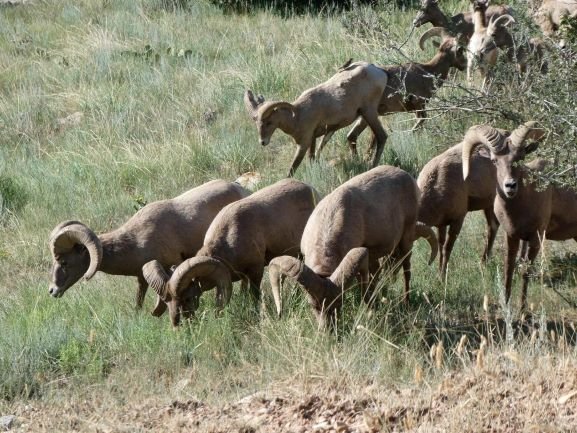 First season in Colorado was spent with my elk-hunting mentor, Jim. I picked up a tag off the leftover list a week before the hunt and my only priority was spending time with Jim, as he is nearing the end of his hunting career. I hope I can chase elk like he does when I am in my early-seventies! This was a unit we have both hunted before, but opening morning Jim sent me in a new direction, in the dark, with some very vague instructions. The instructions consisted of “keep walking downhill until you find an opening in the aspens. You’ll know it when you get there”. I headed in the direction he told me to, sat down in an aspen patch to watch another day begin and was nearly run over by a 5x5 chasing a cow at first light. I shot this bull at about 20 yards. As I was sitting there processing what just happened, I had another group of cows and 4x4 bull come down the hill from the opposite direction and stopped within 35 yards. I was reminded that Jim KNOWS how to kill elk in his favorite unit and has done it consistently for a long time. Thank you for everything and being a great friend Jim! 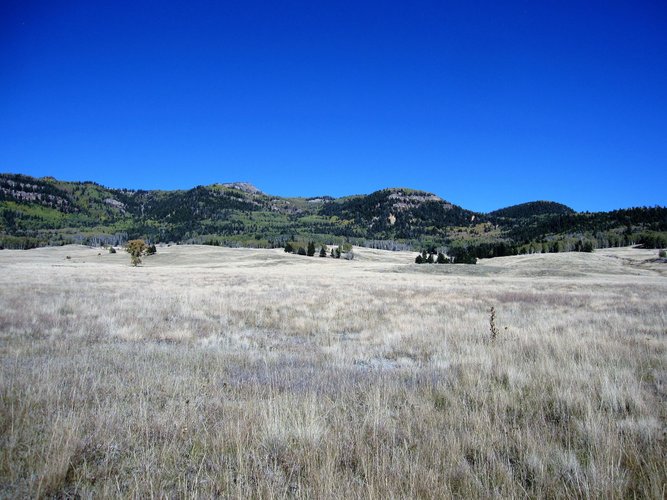 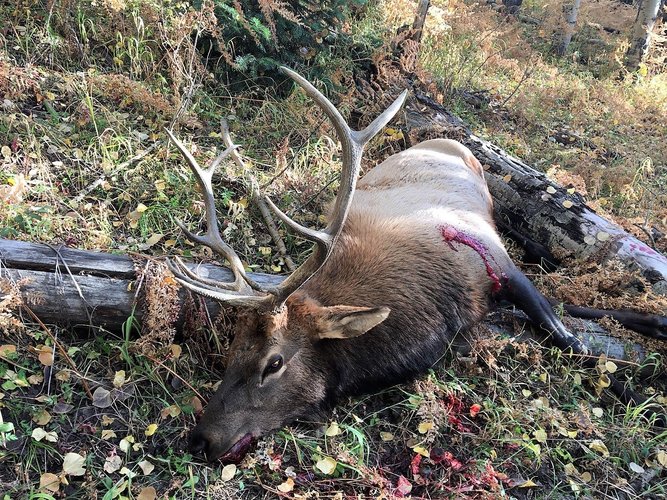 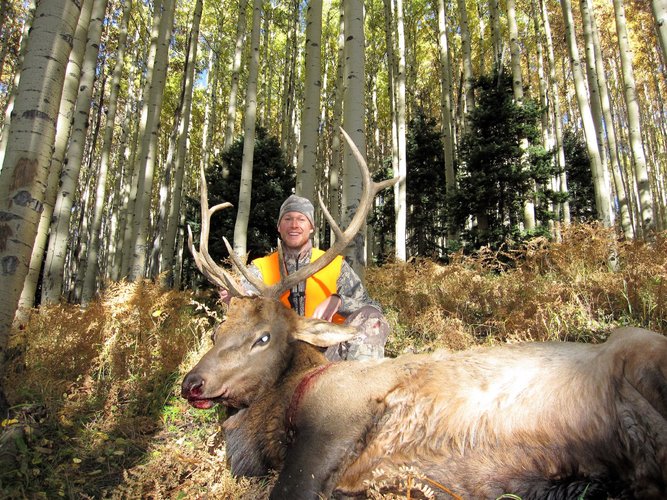 I also burned my Wyoming deer points with muledeerjunkie from Hunt Talk and we drew unit 34 mule deer tags. A couple of generous Hunt Talkers tipped me off to some good areas and I scouted it twice before the hunt. I found some decent mule deer on those trips and was hoping for better when the hunt started. I planned to hunt the last six days of season and Mother Nature served up some insanely windy and COLD weather. We hunted hard for three days and saw only does and little bucks. I called it quits on day four after being out in weather so cold it made this North Dakota boy say to himself, “Damn that is COLD”! I shot a forkie walking back to the truck on the evening of day four (too cold for pictures) and didn’t regret leaving early. Khunter had driven up to join us, as he had a couple of antelope doe tags in the same unit. The highlight of the trip was sitting in the wall tent, with below zero temps and the wind screaming, watching Khunter cook desert sheep back straps on the wood stove. As always, he was willing to share his wealth of knowledge with all who had ears! 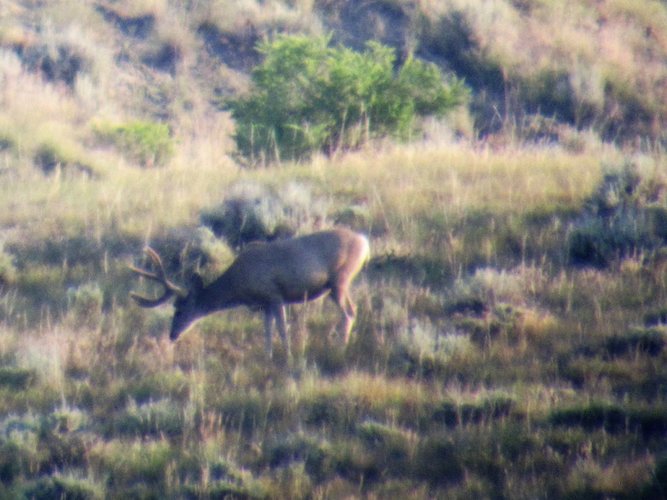 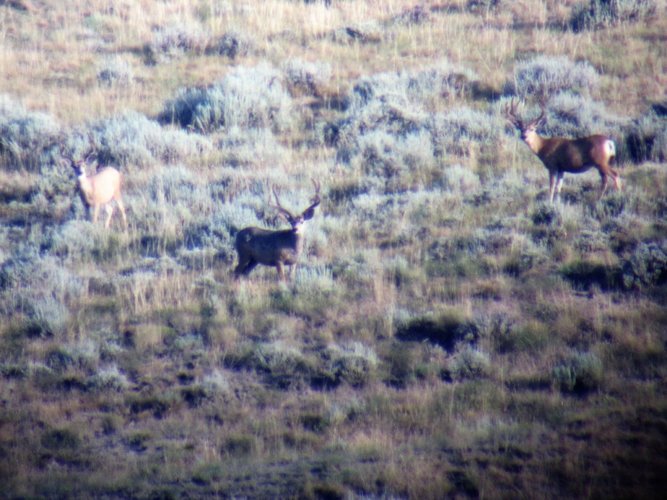 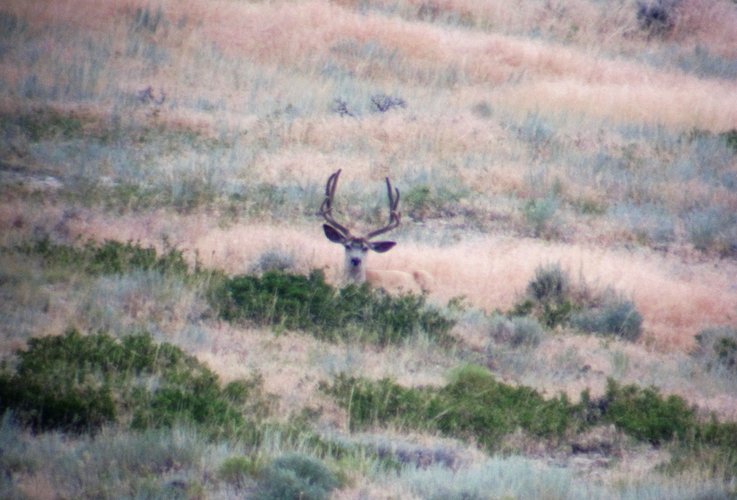 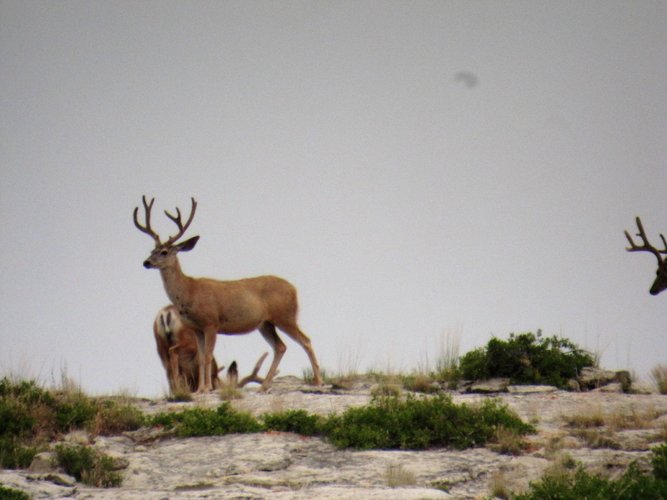 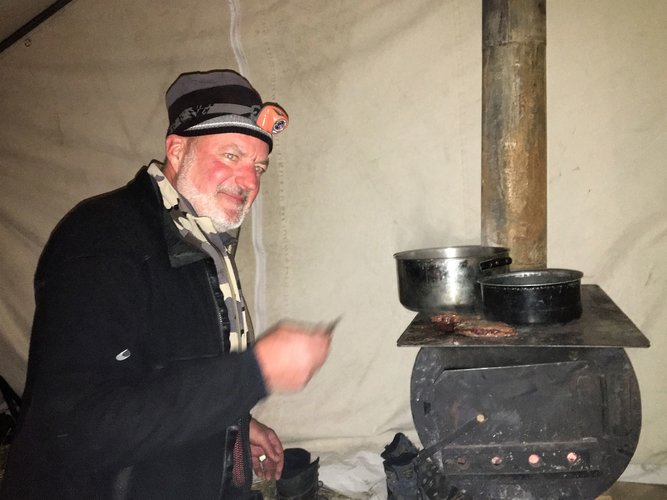 The final hunt and highlight of the season was a very last minute affair. I had drawn cow tag in an OTC unit. It was the last weekend of 3rd season in Colorado and I told my wife she should buy an OTC bull tag and we would go for a quick weekend hike with the rifles. The weather was nice and I told her not to expect much but some peace, quiet and exercise. We were a little late getting to our hunting spot on Saturday morning and had to hustle to get to a point where I had seen elk previously. After 20 minutes of walking, we looked off the point and immediately saw four cows trailed by what looked to be two very good bulls. They were headed in our direction and we let them come as I got her set up behind her rifle. The elk walked inside of 200 yards and stopped. I just told her to shoot the last bull, not how big it was. She put two solid shots into the bull with her 7MM-08. When I was sure the bull was not going anywhere, I told her she had just anchored a bruiser! The cows and the second bull (a beautiful, unbroken 6x6) stood there and looked at their fallen companion. Since I had a cow tag, Kathy passed me her gun and I put one of the cows down as well!

As we walked up to my wife’s bull, we realized what an animal she had. The bull was a 7x7 with an extra point coming off the left side. She looked at me and said, “We are getting this one mounted”. I could not argue with that. Boning and packing two elk was a serious chore, but we would do it again in a minute. I apologize for the lack of field pics, but it is intentional. This has been a good unit for us and we hunt it often. 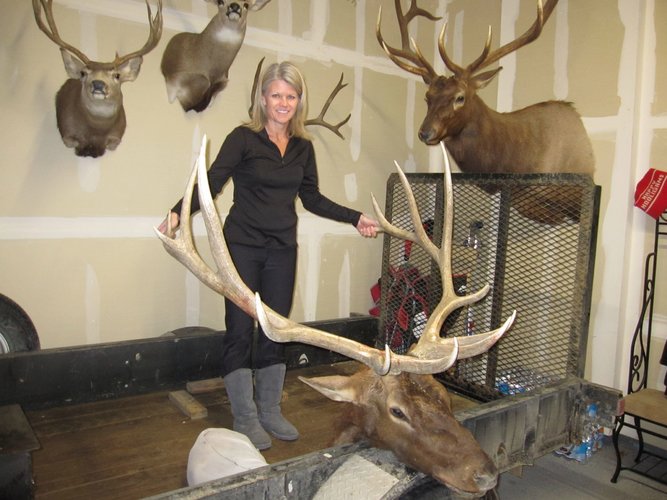 Just thankful to be healthy enough to do what I love. It is not something I take for granted anymore!
Last edited: Feb 26, 2021

Fantastic season and recap Buschy. Congrats on the memorable hunts in some awesome country! Great time of year to share these

congrats to you and your wife

Congrats to you and the Mrs... great hunts/great recaps!

Cant wait to see what 2020 all brought!! Congrats on the hunts

Just because Khunter is grey, does that make him wise?

Congrats Greg on a great season!

Bush, I thought this was a typo, at first. Its fun to see a few more pictures.

Dinkshooter said:
Just because Khunter is grey, does that make him wise?
Click to expand...

Well he IS pretty grey...and he said this when he walked into the wall tent: 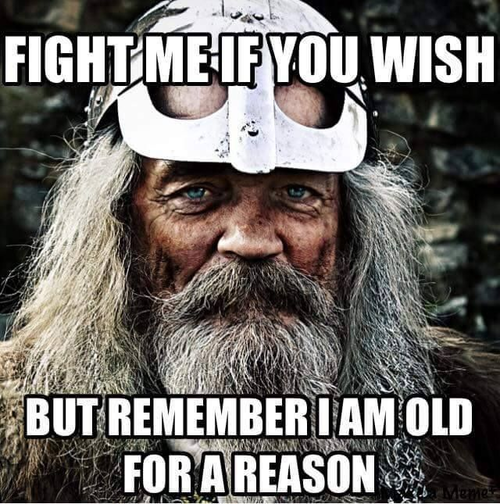 It kind of set the tone!
M

Great season and great post. The story of your wife’s and you elk hunt is pretty darn cool.
S

you had a great 2019, which is of course no surprise whatsoever. Sure enjoyed that we got to scout sheep and share deer/antelope camp.
F

Great season. Thank you for sharing !!
You must log in or register to reply here.