Badgers are cool animals. I have never seen one in the wild, only on video or in photos, etc. I would like to though. I'm wondering who here has experience with badgers, as I'd like to know more about any of you who hunt or trap or just enjoy looking at them.

Anyone hunt or trap these angry little guys? Any good badger tales? Recipes? Grip and grins of Boone and Crockett badgers?

I guess this can be the badger thread. All of the above welcome here.
N

+1
I've only seen one in the wild. Ran into it pronghorn hunting in southern Wyoming. Some think nothing lives in the sagebrush sea. Alas, we know this not to be the case.

I’ve saw one in north central Wyoming while hunting antelope. Very cool animal, it was near a prairie dog town, don’t know if it was coincidence or not.

I’ve seen a lot of them. Don’t think I could find a reason to kill one, honestly. Wimp. 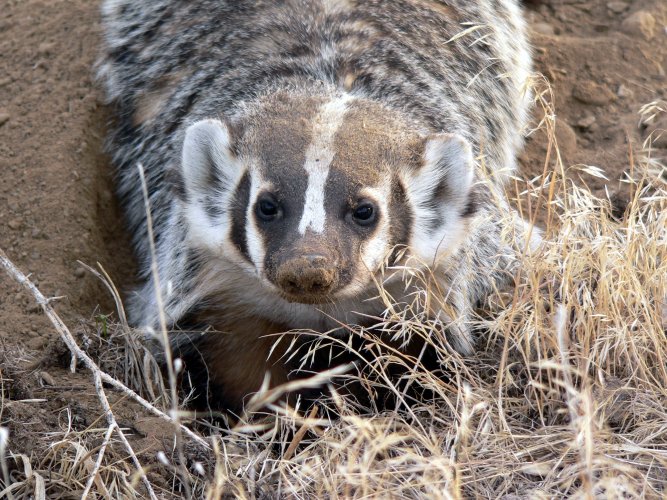 Saw a few chasing speed goats years ago. Took 2 or 3 until we figured out what the hell they were as they didn't like being watched.

There are a few hanging around in michigan, but they cover a lot of ground. I saw one road killed on the highway north of clare a few years back.

Favorite story was a few years ago at church, an old timer told me about his coyote set in his back yard. He said it was like a land mine had gone off and dirt was flying out if the hole! He got up to find a very upset badger going berserk. He went back to the house and upgraded his firepower.

If a guy is good at skinning out their feet, and leaves the claws on, they make a sweet mountain man hat!

Never seen one in the wild, but sadly see them as interstate road kill in Indiana every once in a great while. I would be thrilled to see one alive
L

Oak said:
I’ve seen a lot of them. Don’t think I could find a reason to kill one, honestly. Wimp.

I feel the same way. Really neat to watch one for a while. They sure walk around like they own the place.

Found one killed on the road about 2 miles from my house maybe 20 years ago or so. Central Illinois. Found out we can actually trap them here. Must have more than I thought!

They are way too cool! I don’t kill them. They do a good job on the prairie dogs and really, we could use a few more. There’s a local guy who has one as a pet and it’s the coolest animal I’ve ever interacted with.

A story; a buddy and I were out running around the country side between his house and the mountain. It was about a 3 mile stretch of grass and sage brush. We were maybe 14 or so, shooting prairie dogs with our bows or anything really, birds, ground squirrels, jack rabbits. We missed most of the time, especially since we didn’t have sights. There was a single tree in the bottom of a shallow basin and we headed toward it. As we neared it this jack rabbit colored animal starts trotting away from the tree maybe ten yards from us. We excitedly knocked THE one and only arrow we had at the time but quickly realized it was a badger. We ran up to it and it ran into the bushes at the base of that tree. Man they hiss and growl like no other! A very menacing animal when cornered. My buddy Nate picks up a stick and gives him (or her) a little poke and that thing rushed at him out of the bushes with a vicious growl, sending Nate running the opposite direction screaming like a girl. I don’t know if I’ve laughed as hard since.

On another occasion my dad and I were antelope hunting and found one digging a hole. The ground was soft so we thought it might be fun to dig him out. We could hear it digging through the ground so we’d try to come in on top of him, but 7 or 8 shovels in he’d be 4 or 5 feet over from where we originally thought. After about 10 minutes we gave up. They are incredible excavators. We probably see maybe 2 per year. Easy to miss when they’re not even a foot tall. Saw a big one one time that I initially thought was a coyote. That thing must have weighed 30 lbs!

I found a couple two weeks ago, but they didn't give me any good photo opps. Hopefully I will bump into them again in a couple weeks.

I think I shot one when I was a kid and killed lots of things. I outgrew it.

Here is one from a couple years ago that was disciplining one of the kids. 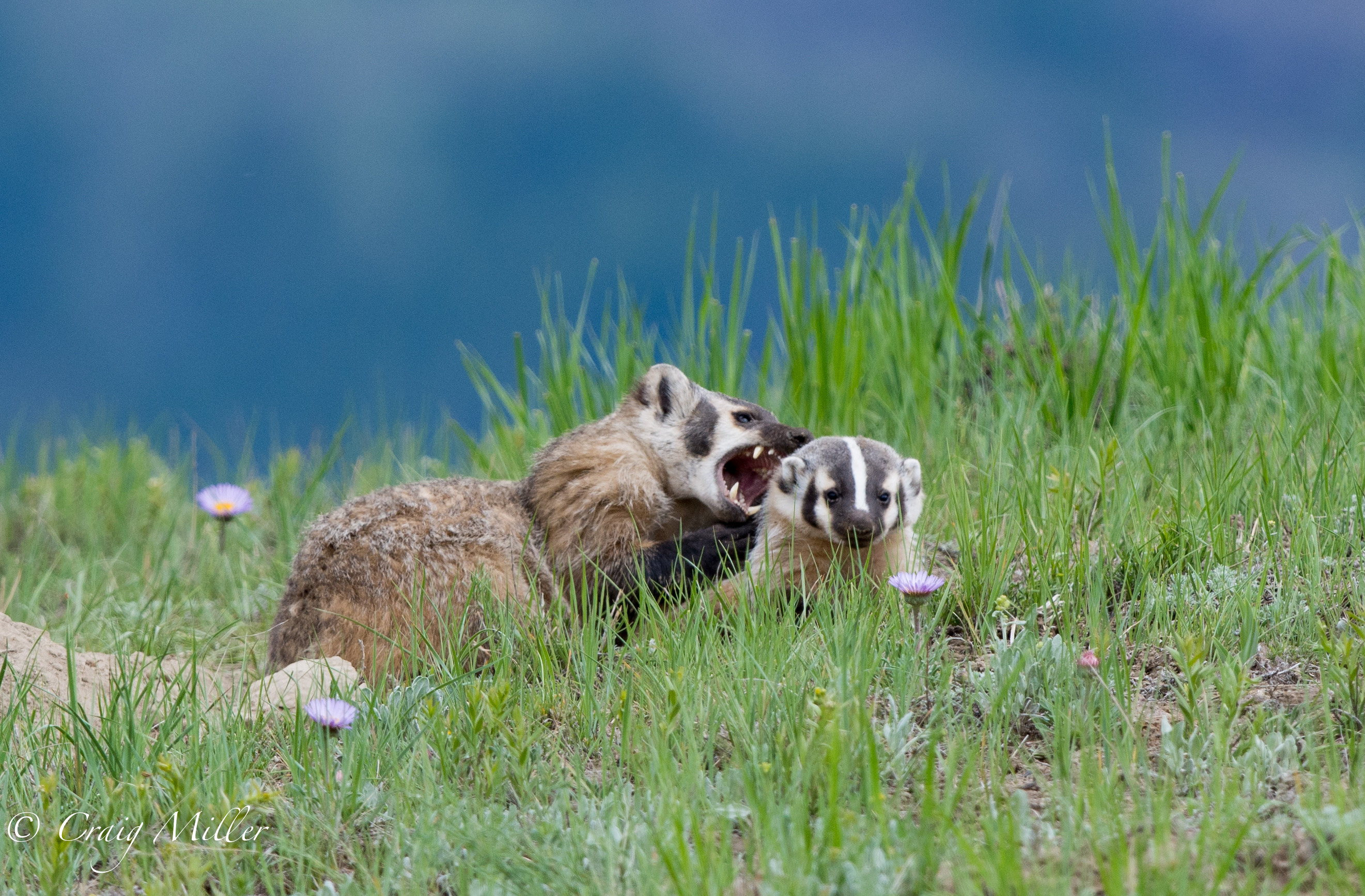 Ran into one mule deer hunting with my son in Wyoming about 6 years ago. Pretty fun to watch. No pictures sorry.
J

They are so low slung that when scurrying across the road at night in the headlights, a badger looks like a giant centipede.
When caught in a foothold trap they sometimes completely dig themselves in.
2

My buddy and I were waiting on some antelope, if they got past the rest of our crew, and got to watch two wander around an alfalfa field a few years back near Buffalo, Wyoming.

Saw one the year before hunting around Buffalo and one in Manitoba at the start of my survey route. I was on that study area for 10 weeks and the burrow was 100 feet from where I started. I saw him the 2nd or 3rd week and he never showed again.

I think you need a fur taker license in Wyoming to legally take one by trapping or shooting, although I am not sure. I know they didn't have nuisance status like coyotes do. And I agree they make for very distinctive headgear.
S

Shot a few over the years. Kinda a pain to skin and flesh but a nice winter badger has nice fur. One time I was running traps at night and a badger crossed the road. I didn’t have a gun so I chased it down and honked it on the head with an axe. One of the dumber things I have done in my day lol

I typically encounter a few a year in UT. Every one I’ve ever encountered seemed more inclined to run and hide than being aggressive. I just watch them for a bit and leave them alone

They are cool. Saw one running full tilt down the median on I-80 while driving out for a pronghorn hunt.

Have seen quite a few. Only mess with the ones near the meadows etc., they do good amount damage with their digging.
Caught a nice sized one this winter and he is getting tanned, front feet on the hide.
Cool animals but they can make a mess of a road with their burrrows.
W

In my early years I grew up in a remote area near Park City, Utah. My parents had recently bought a retired Boxer show dog. You don't have doggie doors in the mountains because of critters so one night I let him out to do his business and all hell broke loose. I hit the porch light and ran out with my .22 pump where 2 badgers were going at it with my dog. I couldn't fire because it was just a big bundle of fur and hair flying everywhere so I tried kicking them. Mistake. Result was badgers 2, Deuce and Baron (dog) 0. My dog was never mistaken for a champion show dog after that.

The second time, I was stalking a buck in the Uintas with my bow. I step over a log and about 5 feet away, one came out of a hole. We had a bit of a standoff. I'd back up and he'd come towards me snarling. I'd move towards him and he'd back up...still snarling. I drew on him but I just couldn't let the arrow fly. It was just too cool. After a few minutes of this, he seemed to have lost interest and scurried away.

I see one occasionally at our cabin in southern Utah. Always remember, (honey) "Badger don't give a sh#t"

I enjoy seeing badgers and think they're pretty cool critters. They usually want to just be left alone, I've growled at a few that just went into their hole and had them pop right back out growling like crazy. Once in awhile I'll find one digging up mice/gophers that doesn't care about me watching as long as I give them some space. 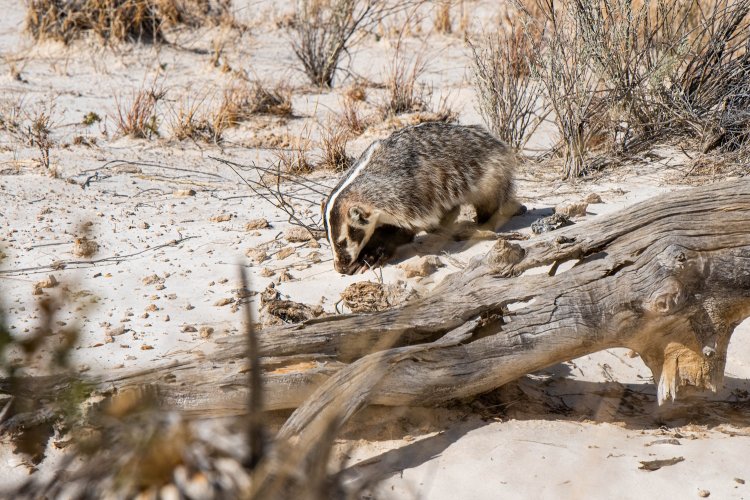 mtmiller said:
I found a couple two weeks ago, but they didn't give me any good photo opps. Hopefully I will bump into them again in a couple weeks.

I think I shot one when I was a kid and killed lots of things. I outgrew it.

Here is one from a couple years ago that was disciplining one of the kids.

That is a stellar picture! I would love to watch them in the wild someday.
You must log in or register to reply here.