Anyone ever hunt Clear Lake-California

I finally got drawn after 25 years or so of applying. Anyone ever been on this hunt. Did you see enough antelope to keep it interesting or did you shoot the first one you saw. Was it a good hunt. thanks. The biologist said the herd is looking pretty good.

Sorry I can’t help you out. Drawing these tags are so rare. I can only hope to draw one someday. I am sure you will have quite the experience.

When is your hunt?

Be sure to post pics and tell us the story of your hunt when you are done.

Congrats on the tag, and good luck!

I drew Surprise Valley on my 2nd try back in 1992. Opening day I had a heavy 15" buck 75 yards away but I was taking my sweet time looking over the large herd. After a while I decided he was plenty good and when I found him in my scope.....crack !...he drops in my scope but I didn't pull the trigger. Unknown to me was another hunter 50 yards from me. After admiring his goat and talking to him, he said he also didn't know I was there, otherwise he wouldn't have hooted and hollered scaring away the herd and denying me a chance at the other great buck. I asked him why he took so long to shoot and he said that he got excited and jammed a round in his bolt and it took him a while to get things right.
After that it kind of let the air out of me and I took the first buck I saw. It was a average 12" buck, nothing special. I wish I had held out but I had been camping for a week already with my wife and a 3 year old and 1 year old, so my wife was anxious to go home. Seen some great bucks. 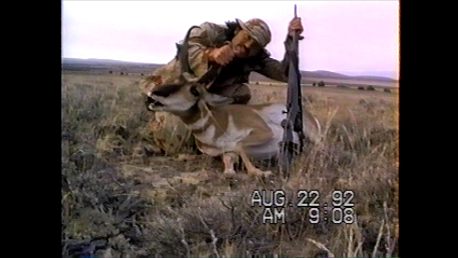 My hunt starts on August 24th. Arriving on the 21st to scout for a couple of days. I have been practicing at 100 to 600 yards quite a bit this year. I am very confident up to 500 yards at this time. My father in law drew a tag as well. He is more of a 300 yard type shooter. We have the whole week to hunt since we are both retired.

That sounds like fun! I put in for antelope every year in CA. I doubt I will ever draw one, but you never know. We just go to Wyoming every year now, because the meat is so good! Take an ice chest with you to cool it down quickly. The temps will likely be over 100 early in the day. I shot a nice black tail in the area a while back. Getting it cool was tricky. It was 108 on the day I shot it. Had to hike out 2 miles with the deer in that heat. It was brutal!
G

I recently purchased a pelican 150 quart cooler for that exact reason. It was not cheap but every other cooler i buy falls apart rather quickly after a few hunting trips. I am retired now and plan on doing plenty of long hunting trips from now on. Did Wyoming 12 years ago and got a very nice antelope out of Casper. I am putting in for numerous states from now on as well.

Enjoy the hunt. You should be able to look over quite a few animals before pulling the trigger. If scouting prior to hunt is not an option, go at least a day or two early. You will see lots of goats on private right from the road. Figure out the access to public areas and you will do fine. From what I've seen herd looks very healthy.
G

Thanks for the input. I have two full days to scout before the season. Will be using a spotting scope and obviously the binoculars. The biologist said the herd was looking very robust this year so I am getting excited. I think I was in my early 30's when I started putting in for this hunt. I am 54 now.
H

I have hunted it twice in the last 5 years, once on my tag and once helping my dad. Such a limited opportunity I dont mind sharing what I know. PM if you need help.
G

Took me about 50 mins to get a nice antelope in Clear Lake National Wildlife Refuge. Saw a nice buck about 450 yards away. he stopped at about 480 yards away and gave me plenty of time to make the proper adjustments. One E-tip bullet later and he was going to be goat jerky for the whole family. I will post a picture of him as soon as I figure out how to do that. It was cool when the hunt started and just got insanely hot after that.

Collective "GASP" from most of HuntTalk (antelope meat aficionados).

2nd day of the hunt. My father in law also had a tag. It seems that we blew a couple of stalks early in the morning. We were very careful but it seems the antelope either saw us or they just wanted to move around a bit. At 9 am I spotted about 10 antelope and only one of them was a buck. The vegetation was very sparse and we were getting very frustrated. We took off our packs and crawled on our hands and knees about a hundred yards over a shit load of stickers and pumice rock. We actually closed the distance to approximately 100 yards crawling on our bellies. The binoculars and range finder were left behind with the packs. Using the scope I spotted a lone set of antlers in the bushes. The tallest vegetation around us was maybe 20 inches. I told my father in law where the antlers were. The does were keeping watch and we moved slower than frozen sloths. My father in law watched the antlers for about 40 minutes and finally the buck decided to stretch his legs. 3 seconds later and boom ! He was down and the does all ran off wondering what happened to their master. We walked down a small hill and admired his antelope. It was slightly nicer than the one I shot the day before. typical. Almost died getting that sucker back to my truck. 2.5 miles of heat, no shade, pumice rocks everywhere , feasting mosquitoes, and a poor miscalculation of our water supply. pics to follow soon. More of my father in law's famous jerky for the entire family!!!
You must log in or register to reply here.
Share:
Facebook Twitter Reddit Pinterest Tumblr WhatsApp Email Link
Top