My best friend has a buddy who lives in the Copper River Valley (about 3 hours east of Anchorage) so my best friend heads up there to fish and stay with his friend every other year. This year, his buddy gave the green light to bring me along - total bucket list trip, 13 days in early June to see if I can make myself sick of fishing.

Right now, the plan is to do a float plane trip into a remote lake and stay/fish for 3 days; and do a 4-day river float trip on a nearby river; we may spend the rest of the time chasing Kings and we are considering doing 1 day of halibut fishing from Valdez; also may do a 2 day trip to what his buddy calls Moose Camp.

Anyway, my best friend always assembles his gear 2 days before the trip and he's not what I'd call a detail-oriented guy, so I'm hoping I can get some solid advice on necessities so I can start buying them now and not just kill my credit card in the last 2 weeks.

Things I know I will need that I don't have:
Bug spray
Breathable chest waders (I know felt-sole boots are illegal)
Rain Gear (my buddy is unsure whether my Sitka 90% jacket qualifies, but I doubt it does)
Possibly a good salmon rod - my buddy's friend is unsure how many he has in good working condition

Other dumb questions:
Take my fly rod or leave it home?
Take my good glass?
As a thank you to the hosts, we're going to bring some dry goodies in our empty coolers. What things are ridiculously expensive in Alaska that are relatively cheap in the L48?

I'm also open to suggestions on where else/what else we should try to do - I'm (gratefully) at the mercy of my hosts, but we still have 5 weeks to plan, so there might be some wiggle room.

For rain gear, if it rains most / everyday, you'll likely want rubber rain gear like Helly Hansens or Grundens. If you're staying where you can dry out every night, then your Sitka gear may be adequate.

Take fly rod, lots of pike and grayling in that area that are fun on the fly rod.

Yep, take your good glass. Alaska is big country and on a scale not found in the lower 48. More often than not things are much farther away than they appear and its nice to have good glass if you want to see them.

I always appreciated people bringing me fish and game from the lower 48 that I couldn't get in Alaska. Perch, crappie, walleye, pheasant, elk, etc. Might seem like common everyday meals to people down south but when you go a few years without having it you really miss it. Unfortunately it isn't as easy to transport as dry goods.

Where in the Copper River area? The climate varies dramatically from one end to the other as does the river. You go from a trickle to one of the largest rivers in AK. I presume you're fishing the lower end? Kings won't really be in the picture on the upper until later in June/July.

IMO, rain gear is subjective to where you'll be. If you're fishing in Cordova/Valdez bring heavy duty stuff, they get about 120" of moisture a year... if spending most of the time in the upper Copper River Valley, its relatively "dry" with around 20-30" a year or less. The real question is, do you want to ruin your good rain gear with fish guts and slime?

I'd bring the fly rod, but would upgrade to 7 or 8wt if you don't have one. 90% of the fishing I do for salmon is with a fly rod. It can double duty for smaller fish as well. I usually bring a bait caster rod/real and a fly rod on all trips that include more fishing than for reds... If fishing for Kings, get a heavy action bait caster and quality real.

Bring a good camera and binos. Always something to look at or take a picture of.

As far as dry goods? I think it depends on where your buddy lives. If the upper Copper they probably hit Fairbanks or Anchorage pretty regularly like most folks who live on the road system. Its only a couple hour drive... They cuss the big city but always make sure to get in a Costco run once a month. If on the lower end, things are a bit harder to get and a bit more expensive. Nothing really stands out as "must have" IMO.

Personally, there is really nothing I miss form the L48 that I can't find here. We have a post office and UPS, along with the internet... aside from the 15-20% markup for shipping, things really aren't that expensive here.

Have fun on your trip. Fishing season is almost here... can't wait!
I

Don't listen to Bambi. Always fish with your hunting gear on. It will help out once bear season come around and you won't have to hike as much as they will come to you.

Thanks for the feedback. The place we will be staying is in Glennallen. Me and my best friend made an expensive run to Cabelas yesterday to pick up most of the gear we will need and called his buddy - he says it's been dry and no bugs in that area. Yet. He also told me that some bug spray will melt your gear and even sunglasses. WTF? I guess I've really missed out on giant skeeters by living in AZ all these years.

He booked a pilot to fly us in to the remote lake and we're still deciding whether to go deep sea - I get to do it a few times a year in Mexico, so I won't lose too much sleep if we can't make it to Valdez for halibut. Float trips on nearby rivers and lakes will make up the rest of the trip. Have not upgraded yet from my 5 weight fly rod - waiting to see if I have any money left in my slush fund and room for more gear. If the kings are running we will definitely take a crack at them - my friend's buddy has enough equipment to get us through. I'm so geeked about this trip - landing gear touches down in 3 weeks.

Headed up there Friday morning. Staying in Palmer first, then moving down to the Kenai. Won't be far from Glennallen. I'll give you a weather and bug update from there. Have fun!
G

Devil Diver Down said:
Other dumb questions:
Take my fly rod or leave it home?
Take my good glass?
As a thank you to the hosts, we're going to bring some dry goodies in our empty coolers. What things are ridiculously expensive in Alaska that are relatively cheap in the L48?

I'm also open to suggestions on where else/what else we should try to do - I'm (gratefully) at the mercy of my hosts, but we still have 5 weeks to plan, so there might be some wiggle room.

Definitely take an 8 weight or larger fly rod if you plan on going to the Kenai/Russian. A fly rod is a lot easier to use than a regular rod.

Carry on your good glass.

Devil Diver Down said:
Thanks for the feedback. The place we will be staying is in Glennallen. Me and my best friend made an expensive run to Cabelas yesterday to pick up most of the gear we will need and called his buddy - he says it's been dry and no bugs in that area. Yet. He also told me that some bug spray will melt your gear and even sunglasses. WTF? I guess I've really missed out on giant skeeters by living in AZ all these years.
Click to expand...

Don't worry, the bugs will be out in 3 more weeks.

I've heard that bug dope with DEET in it can ruin your raingear or rubber items.

On the drive from Anchorage to Glenallen, there's about a 50-60 mile stretch between Palmer and Eureka that is one of the most scenic drives in Alaska in my opinion. Rivers, mountains, lakes, and the chance to see bears, moose, goats. Nothing like it; I look forward to that drive every fall.

Have a great time, take lots of pics, and come back and share your story here. I'm headed up in September to chase caribou, every time I go it's an adventure.

I'm flying up tomorrow. Driving up from Anchorage to Fairbanks. Looks like great weather next week or so. Enjoy the trip and be safe.
J

A word on rain gear....you will get wet from the inside out (sweating) if you do much hiking with rubber rain suites. Helly henson works fantastic in a boat or if not hiking much. Marmot precip or Sitka raingear work great if you are hiking. Make sure every rain jacket you have has pitzips so you have ventilation. You'll stay dry fishing in chest waders plus a decent rain jacket with pitzips. Sitka 90's work great when it isn't raining (which is fairly seldom) but don't work in the rain.

I didn't notice if you listed it but a bug net may be a life=saver if the bugs are bad. An 8 or 9 wt flyrod ought to do the trick on salmon.

You may want a waterproof camera! My Lumix takes great underwater photos of fish plus very nice video. I never have to worry about it getting wet! Take lots of pics and video....and have a great time!

Was in Glennallen Monday. Oh yeah, the skeeters are OUT! Stopped the car long enough to take some pics of a couple caribou and almost got carried away. Sounds like it's been pretty warm there lately. Rivers are running pretty fast and muddy. Hope you have fun! I'm now down in Homer going out in the morning for Halibut and King salmon.

Yep, I hear they're large. Hope you hammered the kings and halibut! 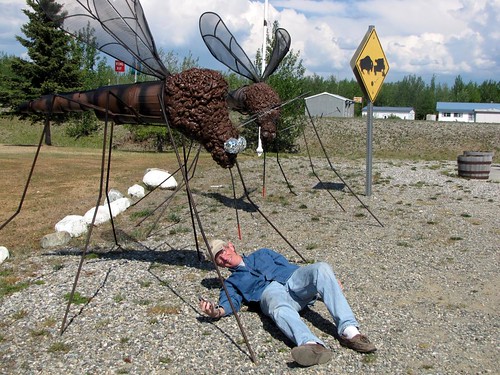 Had a ball! Once the Halibut started biting it was almost non-stop. Released around 7 or 8 beyond our keepers. Nothing huge but lots of nice filets to take home. Kings took a while. Lost the first smaller one, then hooked one good. Landed a 16 pound WHITE King! The wife landed a regular King smaller than mine. She also caught 3 Grey Cod our captain used for bait and I caught 2 Dolly Varden. Sauteed the Halibut cheeks last night. Man, those are good!
You must log in or register to reply here.