EDIT: This entire hunt can be viewed at this YouTube link- https://youtu.be/I_GwEhd3Eww?list=PLLdxutimd-JtsQqrAMODVjKnHst9_ypD2

Well, it is that time again. Time for me to head north to Petersburg, Alaska, get on the float plane, and get dumped off for another bear hunt. This one, having the benefit of two past hunts in the same general area, has a little more complication, thanks to the way AK F&G is enforcing the rules related to transporters delivering a boat.
Under the new interpretation, a transporter cannot deliver a boat to self-guided hunters. That is considered “guiding.” Yeah, I know what you are thinking and I feel the same way.

Last time, I went and picked up a skiff and if not for the help of my Uncle helping me tow it across the big water, I am not sure we would have even had an episode to film. That was stupid plan on my part, rescued by the good intentions of my Uncle Jim, who happens to live a couple hundred miles north, in Haines. He has fished those waters a lot, commercially. When I told him my original plan, he suggested it would be a good time for him to sail down and meet me, allowing us some time to visit. Really, I think he was worried my bullheadedness was going to be my undoing.

Not wanting to do that again, and not wanting to impose on him, I have come up with a different solution for this trip. A 14’ inflatable canoe that I will fly in with all our gear. It is an inflatable that is standard fare in Alaska. The main inflatables you see in AK are made by a company called SOAR Inflatables. I have had it since last fall. It is heavy, durable, and plenty seaworthy for the islands and inlets that I will be confining myself to.

Here is there link - http://www.soar1.com/sec_canoe.htm

Here is a link to the inflatable I have - http://www.soar1.com/soar_pro.htm

I will have two camera guys, so they had to rent their own boat. Strange how a camera crew can rent a boat and have it delivered, but a hunter cannot. Oh well. That is the law I am dealing with. You will not see me in their boat. You won’t see any of my gear or a bear I might shoot, being hauled in their boat.

Due to the mobility restrictions created by me being in this small craft, we are going to camp on the beach. Yup, tent camping in the moist, damp, windy islands of SE Alaska. Call me stupid.

My level of stupidity is only matched by my commitment to kill one of the two monster bears I have seen in the previous trips to this area. I will be camping less than a mile where the two biggest bears I have seen up there were located.

Who knows, they may have been shot since I was there two years ago. But, I doubt it, as very few people want to mess with this spot. Huge tides, very shallow, very remote, and hard to get into some of these nooks and corners where the bears are.

Major logistic issue will be keeping things dry, especially the camera gear. I just don’t know how else to do it, when a transporter is not allowed to deliver a boat to a hunter. It pretty much relegates the self-guided bear hunters to areas within boating distance of a transporter facility. Or, you do what I am doing, fly in a smaller craft.

This is the last hunt of the first season of Fresh Tracks. Having seen many of the edits and lots of footage, I see huge progress made from the first couple hunts of last year, to the final hunts of the seasons. This new idea was kind of like building a house without any blueprints. No one had done it this way before, so it was a lot of trial and error. I think this hunt will be the test grounds for all that we have learned by reviewing the footage of last fall.

I am here to redeem myself. To do better by the bears. Those who watched or read the story from my last hunt when I was here know the despair of me losing an animal for the first time in my hunting life. Very disappointing and almost enough to cause on to fold their hunting tent and sell the guns.

I have since looked at bear anatomy charts and realize now how low the heart and lungs sit in a bear that is on all fours. That shot, I purposely held on the point of the shoulder, hitting exactly that point. But, with a very slight uphill angle, a shot already higher than most the vital area, ended up being a bad shot, even if I hit exactly where I was aiming. I have reviewed that shot dozens of times, and now compared to the anatomy charts of bears, realize the problem – a problem I don’t intend to replicate on this hunt.

My one disappointment of having to go on these dates is that I will miss the Memorial Day ceremony at the Bozeman Cemetery. I guess I will have my own private ceremony out on the coast of a remote part of Alaska. Any bear I might shoot will be in honor of the many who have served, and are serving, our country.

So with that, off we go. I won’t have any service, other than sat phone, so I will have to give the day-by-day blows when I get back to Pburg. Last time, I had the story, along with most the pics, up and posted the day I got home.

If you want to read the story of the second trip we took to SE Alaska for Black Bear, here is the link to that story. That hunt made two separate episodes, in two separate seasons; Season Three and Season Four.

If you want to read the first try we had at Alaska Black Bear, here is the story to that hunt. That hunt was included on the Season Two DVD.

Lift off is Thursday. Gonna be fun, if nothing else. The last episode of Season One of Fresh tracks is going to be wrapped up when this hunt is finished. Hoping to put some serious frosting on the cake, or as they spell in that part of the world, Kake.

A friend of mine from the Forest Service, who happens to be one of the most accomplished hunters in the country, let alone Alaska, sent me the coolest mapping tool I have ever found for Alaska shore line. Public domain information.

Here is the link - http://mapping.fakr.noaa.gov/szflex/

Seems the NOAA has been mapping Alaska coast line over the last few years. They have hi-rexz pics of much of the coast. You can watch either video clips of their flight cameras, or download the photos. Here are two photos from that site.

The little blue cirlce is camp. A good creek just to the east will provide water. The big flats to the north and east are where we chased the biggest bear of the last trip. You can glass that shoreline from camp. 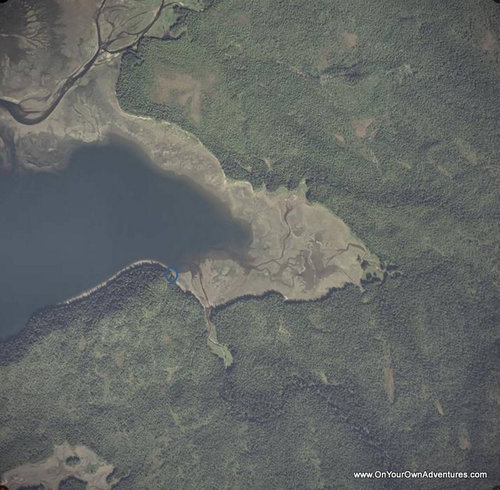 This is a more detailed pic of the camp area, just to show how hi-rez these pics are. You can get some great details. Everything is taken at low tide, so you see just what you are dealing with when the tide goes out. 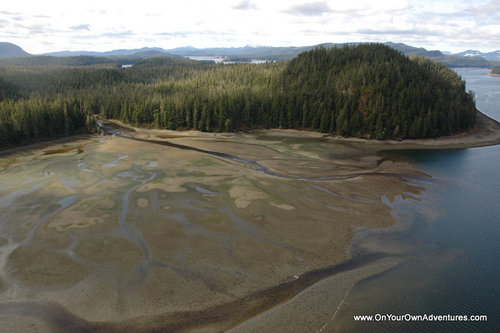 Good luck and have fun.

Have a great adventure. I wish for you unusual sunshine, huge bears and no bugs.

Have a great trip. Hoping to make it up there next spring.

We will all be looking forward to the story. Good luck!

Best of luck and can't wait to read the results.
D

All the best for a safe and successful hunt and i hope you get a real close look at one of those big boys. Those pictures show some magic country.
1

Good luck! A SE bear hunt is definitely something I'd like to give a try.

PS- Don't forget what 'Gunner/Jose says that SOAR stands for. Swim Over to Another Raft...
G

Have fun, be safe!

Good luck these stories make me wanna go up for my 3rd trip there. Stinks to hear the new reg enforcement since my boat rental is less than a mile from the float base drop off. Now I gotta rent a vehicle I guess since the renter will not be allowed to drop the boat off at the dock which is honestly around the bay from his house. Geeezzee govt. redtape gotta love it not sure why ADFG gives the transport bizzz such a hard time up there. Some of the stories my guy tells us are just crazy things they will do to catch them crossing the transport/guide line.

Good luck Randy! I spent a summer in Petersburg working for the Forest Service when I was in college. I saw some monster bears when I was there, and kick myself for not buying a NR tag.

What island are you flying to?
B

Methinks you are overdue for a BIG bear. Best of luck to you.

it will be interesting to see how the raft set up works out,,,good luck on a big ol pumkin head.this is on my bucket list one of these years.

Good luck Randy. This is your year!
C

Good luck and a safe hunt. Looking forward to the report.

Good luck. Can't wait to see the results.
You must log in or register to reply here.