It's always fun to go to new places. Whether it's hunting, fishing or just seeing a new place it's usually a good time. Often I (and I'm guessing you) dream of a new place and what mysteries it holds. Maybe its a 170" whitetail or a 380" bull. I try to keep my mind in check because I don't want a great trip ruined because of unrealistic expectations. This isn't one of those trips. I had high expectations, but I had no idea what we were heading towards. This is one of the few fishing stories that's all true.

Last November my friend Justin and I were hanging out one afternoon before heading into the whitetail woods and we starting discussing our mutual desire to go on a fishing trip. A year earlier Justin's dad and a friend had gone down to Grand Isle, LA and caught some really great red and black drum. We looked at the calendar and picked out some dates the first week of March. I did some research and found some small beach cabins that were very reasonably price and we sent them a check. The plan was made. We would leave Thursday morning and drive the 12hrs to Grand Isle to fish for a couple days then drive home on Sunday. We would be pulling a 14' john boat down there and fishing in the marsh and on the massive flats. For those of you that don't know where Grand Isle is look 50 miles due south of New Orleans and find where the last road ends. You drive on bridges for hours to get to the island and when you arrive you can see oil rigs a few miles off shore. Its a cool island town. Both Justin and I have caught our fair share or red drum but never a giant and neither of us had ever caught a black drum. Our goal was to catch both.

We arrived Thursday afternoon checked into our cabin and headed to the water. It didn't go well. We caught a few saltwater catfish, but that was it. We didn't have any real fresh bait and we didn't have any crabs (which we were told to use). After an excursion to find live crabs on the main land we were back on the water before lunch time. It took a little bit of moving around, but finally we found the fish in 2 different main locations and when I say we found the fish I mean WE FOUND THE FISH! We fished Friday for about 7 hours then because of bad wind only fished Saturday afternoon for about 4 hours. We averaged a fish over 20lbs every 11 minutes. We both caught a big red 41" and 43". I caught the biggest black drum Saturday afternoon right before we left he was 37" long and 37" around (last pic). It was nonstop action with big hard fighting fish.

We even drove a 14' john boat out into the Gulf of Mexico just to say we did. That is not advised. We immediately discovered we made a mistake and turned around while fearing for our lives, lol. Fun times were had by all. 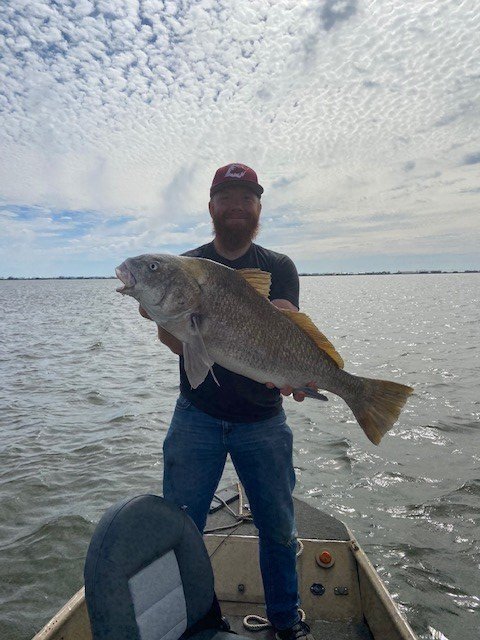 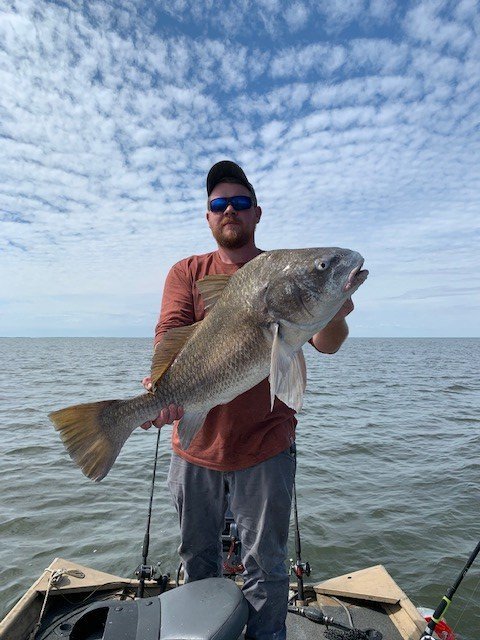 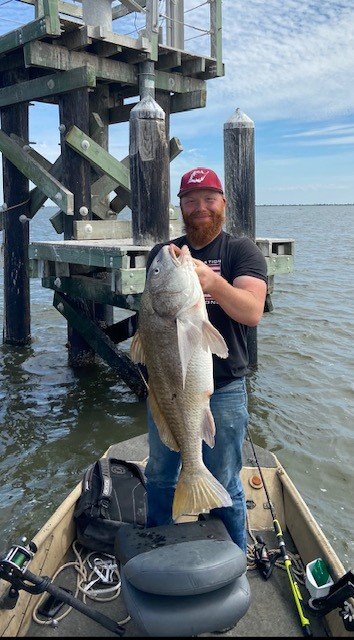 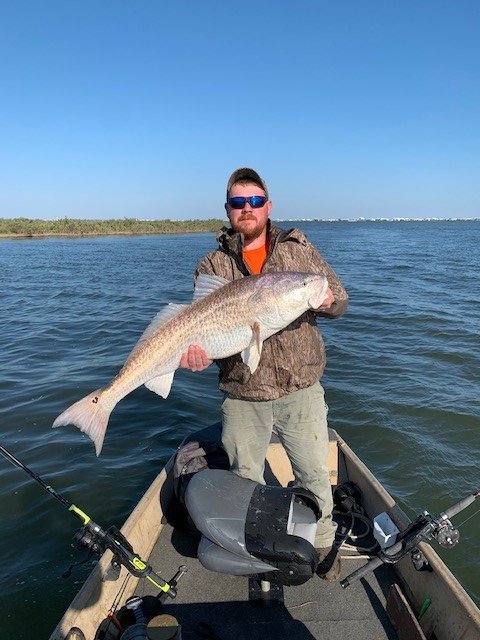 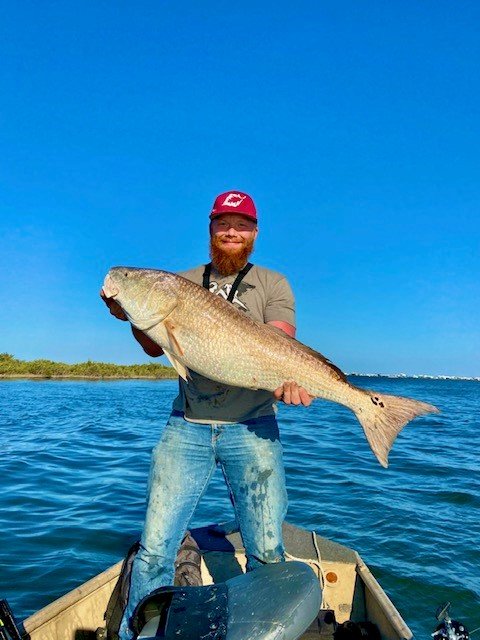 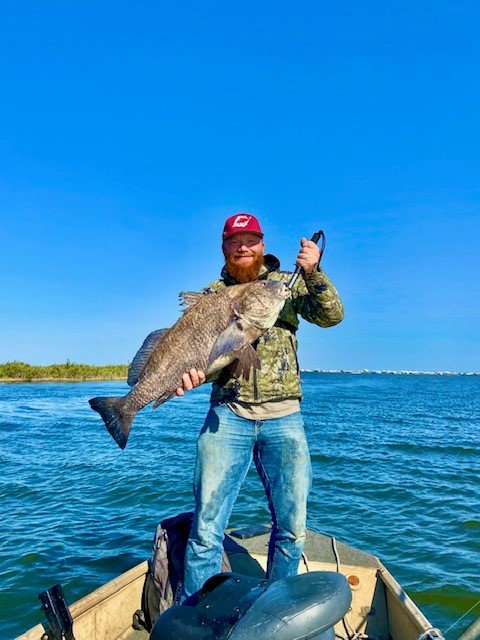 Glad yall had a good trip! I live in the state and have yet to go to Grand Isle aside from work. Made plans a few times but each time it fell through. Going to have to make it out there next year.

Way cool!!!
On my bucket list...except with fly rod.
Can you elaborate on your fishing technique?
Was this sight fishing or bottom fishing?
Just curious.
Your fish were very impressive.

Hem said:
Way cool!!!
On my bucket list...except with fly rod.
Can you elaborate on your fishing technique?
Was this sight fishing or bottom fishing?
Just curious.
Your fish were very impressive.
Click to expand...

We were fishing on the bottom with blue crabs cut into quarters. You could also use the claws for bait. 7' rods with 5000 series open face rods. We used as much weigh as was needed.

Congrats! Redfish are a blast. Tasty, too.

Awesome, we are going on an overnight charter early next summer and will add this to the trip!

The annual Tarpon Rodeo is neat to see on Grand Isle each year but I heard its getting extremely crowded with people on the island. One long traffic jam but fun. Congratulations on your successful trip!

I really miss fishing my home state of La. It's been too long. Glad you enjoyed it.

Wow those are some big fish!

drexal said:
I really miss fishing my home state of La. It's been too long. Glad you enjoyed it.
Click to expand...

It was the best fishing I've every experienced in terms of fish size/quality. Its an unbelievably fishery. You could get spoiled pretty fast out there!

I lived right near the Hopedale Marsh for about 4 years. It was some of the best fishing of my life. Bringing back some memories for me here.
R

spent many-a-day on grand isle and surrounding barrier islands. fishing in s. louisiana will spoil you.

Congrats man, I am glad you enjoyed our state! Big fish are cool and all, but did you catch enough small ones to fill the limit? Red and black are both amazing table fare.

I’ve had trips like that where you get tired of catching big ones and can’t fill a limit cause they’re all too big, Sort of a good problem to have, but very frustrating for a hungry boy!

KipCarson said:
Congrats man, I am glad you enjoyed our state! Big fish are cool and all, but did you catch enough small ones to fill the limit? Red and black are both amazing table fare.

I’ve had trips like that where you get tired of catching big ones and can’t fill a limit cause they’re all too big, Sort of a good problem to have, but very frustrating for a hungry boy!
Click to expand...

We released them. They were too big. But in all honesty we came to catch big ones. We can catch plenty of table fare in SC. It was an amazing trip!!!
P

Grew up fashioning grand isle! You should try to go the last week of July for the tarpon rodeo.
S

Nothing else quite compares to marsh fishing Grand Isle and Venice.
You must log in or register to reply here.