To follow up on the deer thread, the elk version.

Started out the 2020 season in January with this WY cow...had no idea at this point the mess 2020 would become. Seems like a lot longer ago than 11 months: 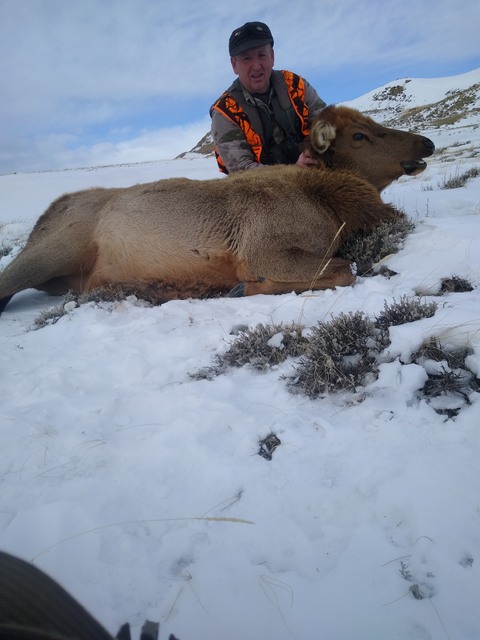 First thing this year, helped my good friend from Laramie with this elk. He wanted to try out one of my rifles and shot it with a 140 grain e tip from my 7 RM: 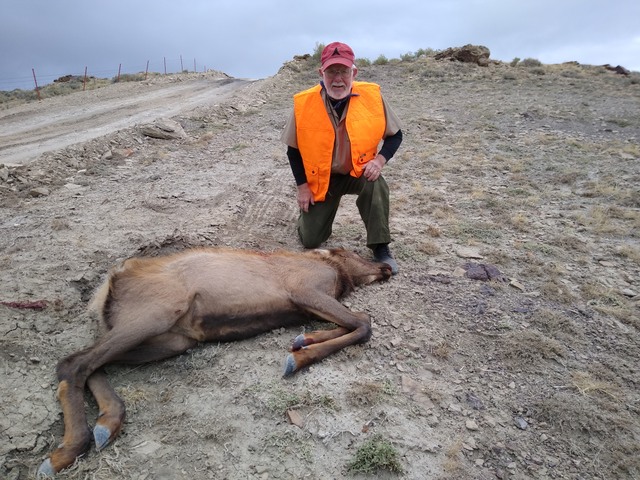 Next up was general elk with oldest nephew and 3 friends that normally hunt late cows. They all drew general tags this year. My nephew had some tough luck, seeing bulls and elk everyday but not connecting. I blew one opportunity for him when I topped a ridge too fast and spooked off a good bull. He could have shot multiple cows, but wanted a bull or nothing. Sometimes its nothing.

Later in the season and after changing up locations a bit, we started bumping into a lot more elk. It was just an "off" year with all the fires, fire restrictions, dry weather, about on par with 2020. Day 6 of the season, my friend and I decided to hunt together and hike up on a ridge elk like to feed on. Just a daylight we heard a bull bugle and soon spotted a 5 point, spike, and several cows grazing. I've shot a lot of elk and since my buddy had never killed a bull, told him it was all his. He made a great shot with his 7 RM. The one thing I appreciate about hunting with these guys is their shooting ability. If they find what they want, their shooting is not a question.

My friend with his first bull, he was pretty darn happy and so was I. 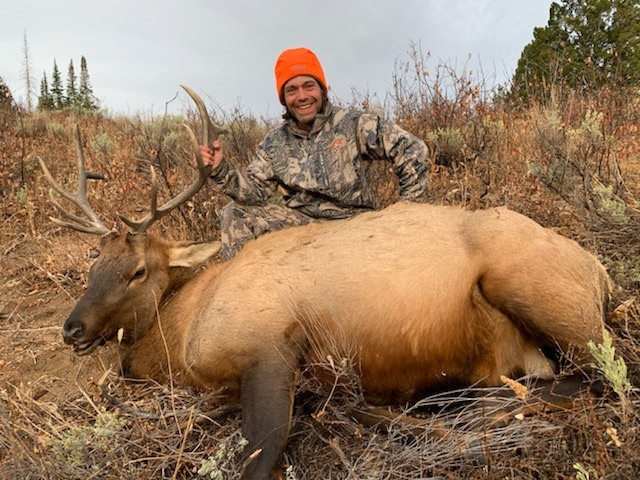 The very next morning, we decided to try a place I'd scouted earlier, but had never hunted. We all split up and about a half hour after daylight my old high school friend from Montana killed a spike bull, also his first bull. He's not big into pictures and didnt take any, but he was real happy. I decided to continue to hunt while he was breaking his elk down. I didn't hunt long and found a cow edging along feeding in the timber about 50 yards away. She was all alone and just kept getting closer. Finally, at about 30 yards I placed the leupold dot behind her shoulder and squeezed the trigger on the 7-08. A quick 30 yard run and a crash and I had some work to do: 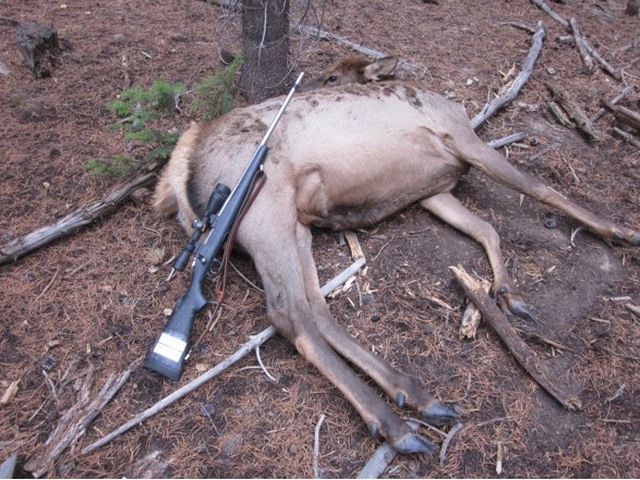 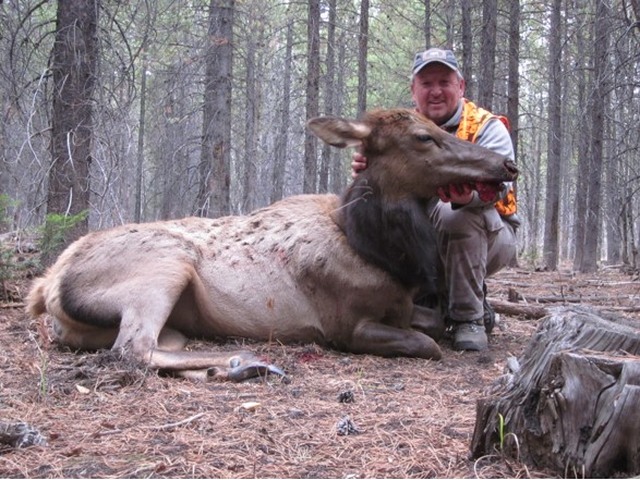 With only one tag left, the last of the camp filled out hunting a spring where we had watched elk drink from 2 nights in a row. Just like reading a script a half dozen made their way down to the spring.

Not the best picture, but only one I have: 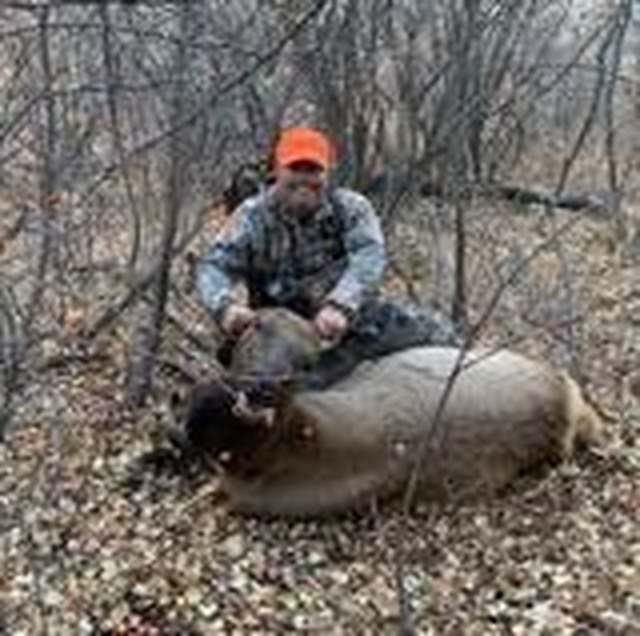 In spite of the fires, heat, etc. we managed to go 4/5 on general elk. It was pretty cool that my nephew made the decision to hunt for only a bull and passed up cows, no way I would have done that at his age.
P

Lotta great memories and good eating right there!
B

The next hunt was a pretty special one for me. My Dad drew a breaks rifle bull tag as well as a b-tag after applying for a long time. As luck would have it, he drew a permission slip to hunt a great private property so we were both pretty excited at the opportunity.

We arrived in the breaks a day earlier than he could hunt the private ranch so we scouted from the county road. We found a bunch of bulls and it was looking pretty good for the next day. Right at daylight we again started seeing a lot of elk and a lot of bulls right off the bat. Since Dad was the only hunter on the place for 4 days, we decided to look around a while. Eventually we found a very good bull, great thirds, great 4ths...and solid everywhere else. We took off after them and edged our way to about 500 yards. Something spooked the bedded elk and the bull we were after moved off with the herd. We finally caught them about a mile further out and the bull we were after and a couple cows walked up out of a pine draw. I dont know what happened, but Dad shot and missed clean. We walked over and looked around for about an hour and didnt find anything. I'm positive he shot right over the bull, was kind of a bummer as I'm sure that bull was crowding 350. We decided since were already back in there to look around some more. We found a big herd with about a dozen bulls, the biggest being a solid 6 point. We got up to about 200 yards and just watched them. I told Dad I was going to reverse our stalk and look farther down the ridge. I didnt go far and spotted 3 more bulls, a good six point with a broken 5th, a 7x7, and a smaller 6 point. I went back and told Dad what I found, and also that 2 of the 3 bulls were better than the biggest 6 point in the herd we were looking at. So, off we went. We edged into 250 yards and Dad got set up on the elk. They were all bedded and we figured we'd just wait them out. About 5 minutes later the smaller 6 point walked over toward the 7x7 causing him to stand. Dad took his time and sent a 140 grain e-tip from my 7 RM on its way. The bull dropped and Dad shot him again to make sure.

While not as big as the bull he missed, still a solid bull and my Dad's best: 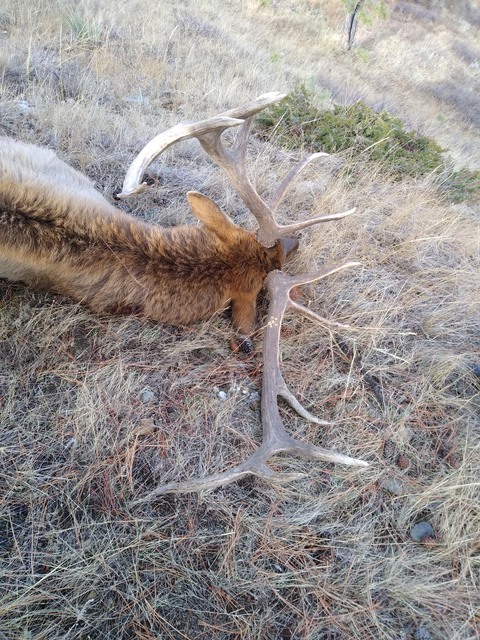 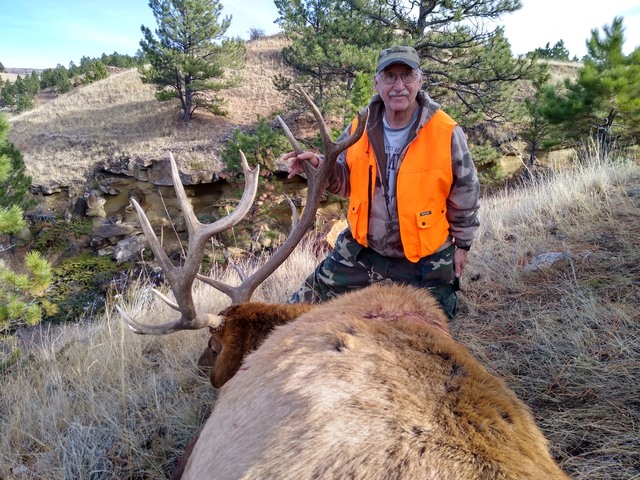 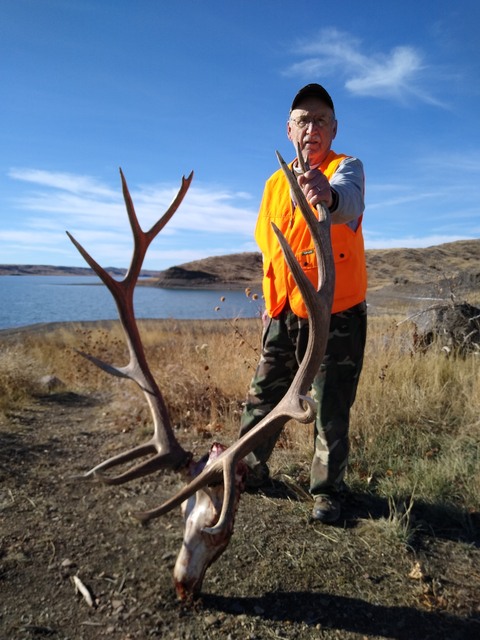 I knew I'd pushed Dad about as far as I dared. Rather than bust our ass trying to pack the elk the 2.5 miles each way all at once I decided to hunt the mornings for his cow and then make a trip the next 2 days to get the bull to the truck. So, the next couple days we would hunt the morning, then I went in and packed out. The bull was in a great place to stay cool and I was able to hang it in a large pine.

The second morning we found a herd of elk right away and watched them walk into a draw. So, Dad decided to try to fill his b-tag. We walked over where they disappeared into the draw and found them feeding slowly along in the pine trees. Dad picked out a good one for the table, and made a nice shot, again right at 250 yards. 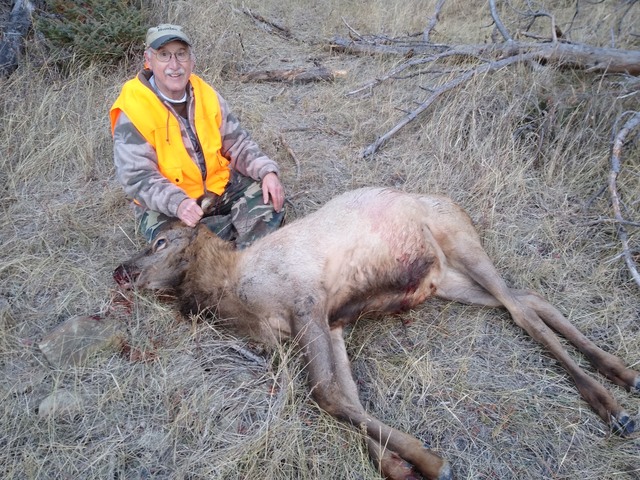 That one was wayyy closer to the road so we packed it and then I went back and got the last of Dads bull packed. We felt pretty fortunate to get this opportunity and its great to hunt a place where elk aren't running for their lives and getting constant pressure. Its too bad more of Montana isn't managed like this, hell, I'd probably start buying elk tags again if it was.
S

I think I would call that a successful season. Great work.

Great season, as always. Cool hunt with your Dad!

Congrats on a great season!

Great stuff. Congrats on an excellent elk camp!
B

Next, the story picks up with my nephew and I in Montana taking care of his deer and discovering the 7 sets of elk tracks. I deboned the deer and put it in my pack and asked him if he wanted to track the smoking fresh elk tracks for a while since the conditions were good. He said sure, lets try. So off we went following them slowly as they worked their way up hill. Finally after about an hour and a half we caught up to them on an open knob and 3 stood up from their beds at about 80 yards. The one cow had a brown radio collar, I have no idea when they last radio collared elk where we hunt, but we have seen them in the past (15 years or more ago). My nephew knelt down and got on his shooting sticks but was too low to see them. He stood up and they got nervous and walked over the knob. We walked up and caught them as they were moving up some scatter timber across a draw. My nephew got on them and I ranged them at 362 yards. I asked him if he felt comfortable and able to hold the crosshairs on them, he said, "yes, I'm steady". So I told him to aim about 6 inches over the back and squeeze. It took him a while but finally he sent a 100 grain solid base from the .243 on its way. I heard the bullet hit solidly and saw the hair part right behind the shoulder. The cow trotted off trying to stay with the rest of the herd and when she went into the timber her head was down and she was shaking it from side to side.

I called my Brother and told him we probably had an elk down, he was pretty excited since it was his sons first elk. We made our way over and found hair in the snow where he'd hit the cow. About 2 steps farther we started seeing blood right away, lots of blood. 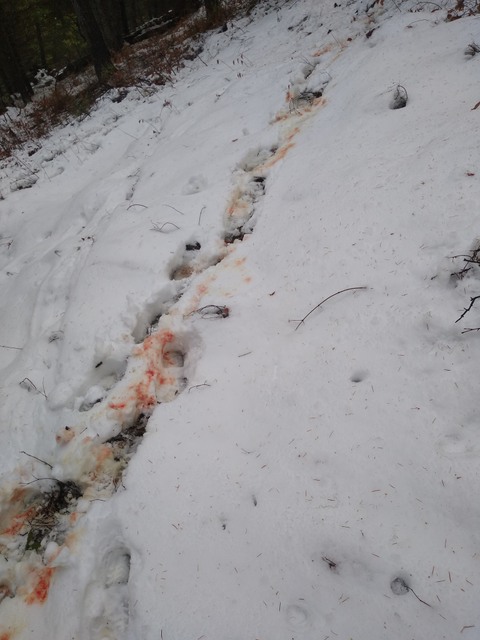 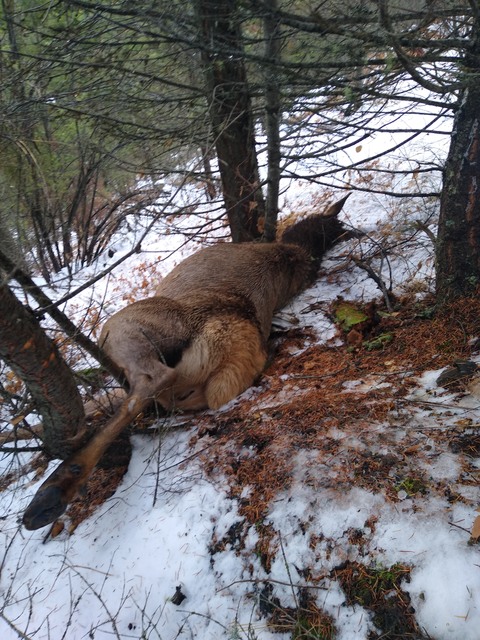 My youngest nephew filled both his tags in about 2 hours, with 2 shots from my grandfather's .243 and also got his first elk. Not bad for 13 years old. 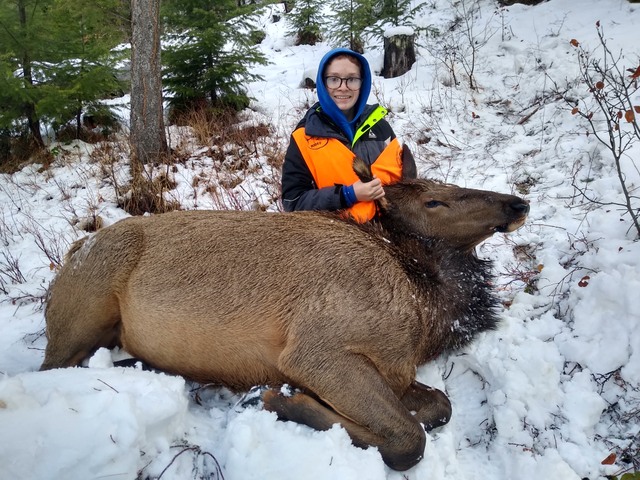 Picture with both of us: 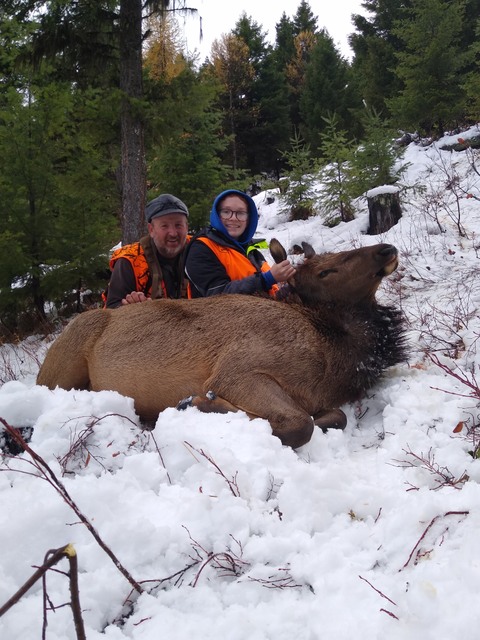 So, after getting back from Illinois a friend from Utah and I decided to make a run at some late cows in Wyoming the day before yesterday. We found a herd with maybe 200 and watched them as they fed across a slope. We stalked in front of them and slipped into about 100 yards and each took cows from the same bunch: 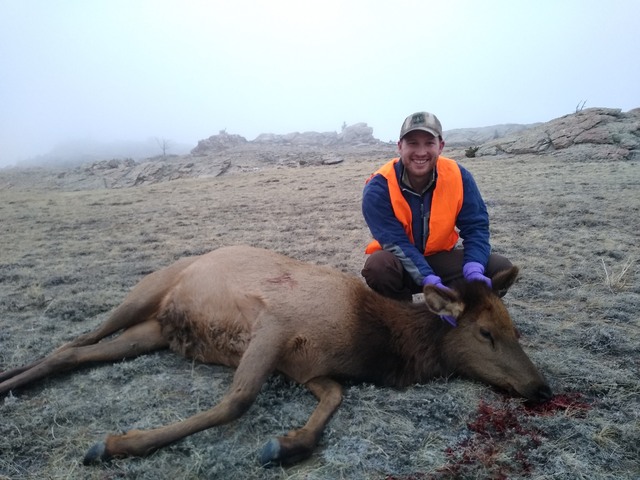 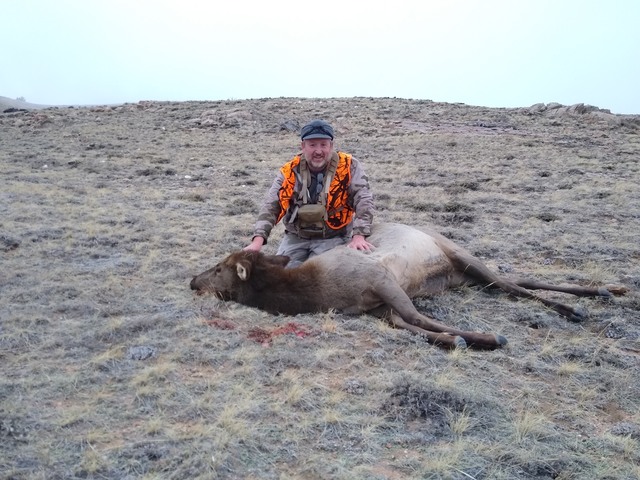 We got both elk broke down and were back to the truck about half hour after dark. Went back yesterday and had just enough snow to use a jet-sled to get them out. Had them loaded and in the truck by 9:30 AM.

I have one more elk tag and may try to fill it Monday if I have time.
H

Great adventures this year. Your Dad’s bull is a stud. Nicely done.

Wow what season talk about being a buzz saw to the ole elk woods!! Congrats looks like a lot of fun was had.

Awesome season all the way around. Have your young nephews' feet hit the ground yet?
C

Buzz’s season updates are pretty much the posts that I look forward to the most on here every year. Well done Buzz, as per usual.

Congrats on the great season Buzz and even better you got to enjoy it with the people who mean the most.
You must log in or register to reply here.

All Elk Are Not Created Equal