Very nice! Thank you for sharing!

That was an outstanding write up, thank you for sharing such a grand adventure! Enjoyed reading. Congrats on a fine Bull, lots of tasty goodness for you to enjoy.
Matt

Amateur.....Newberg would have shot him so he would run to the road and fall over dead.

Seriously, awesome hunt, story, and I'm sure meat! That rug will be amazing.
Congrats!

Congratulations! To tell the truth, I was certain you'd have a great hunt and report to share with the rest of us. The hide on your bull looks exceptional.

Congrats on the fine animal, and thanks for sharing your cool adventure!
J

Incredible! Great bull and write up, thanks for sharing!

congrats on the hunt, the fun, the meat, and the trophy.
I hope to draw the tag for next year, 14th times the charm right.
S

Congrats and thank you for sharing your story.

Congrats on a successful hunt. You will enjoy that well earned meat for at least the next year. Please post a photo of the hide once it has been tanned.

On my way home. Getting him processed was a lot of work. We did end up doing a lot of stuff that was more work, polish sausage, summer sausage, brauts, jerky, breakfast sausage, burger and steaks and roasts.

These things have huge bones and the meat yield on my bull was much less than I expected. My friend sent me home with pretty much everything I could fit in the coolers that I had bought. 1 was full of the hide and 2 were full of meat. I’ve got the hide from the face and about 10 pounds of meat in my soft cooler that I’m carrying on.

We couldn’t find a tote that would fit the skull so we built a box for it and that worked out really well I think. The box is 28” wide and 26” tall. I could find totes that we long enough but they were all too shallow to get the skull in them. Wrapped the skull in plastic and then wired it to the box. Threw my boots in there and then filled it up with clothes and other stuff after I took the picture. 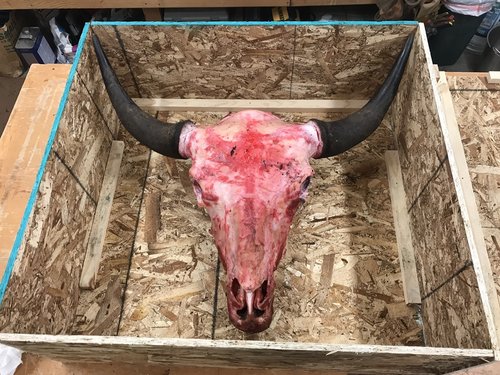 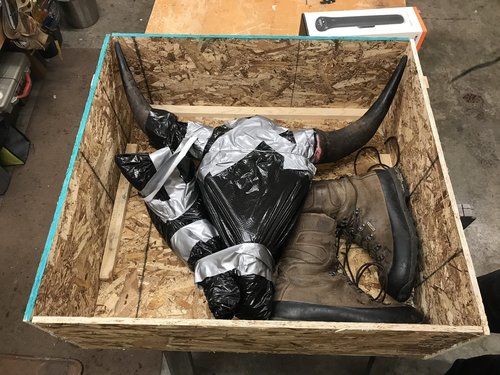 Got everything loaded into the coolers and got to the airport about 11:00 pm for a 12:40 am flight. Getting through baggage and security wasn’t too bad. TSA did have me stick around while they opened up the oversized box and looked inside and took a swab to make sure it wasn’t a bomb.

I thought this picture of the luggage cart all loaded up was good. 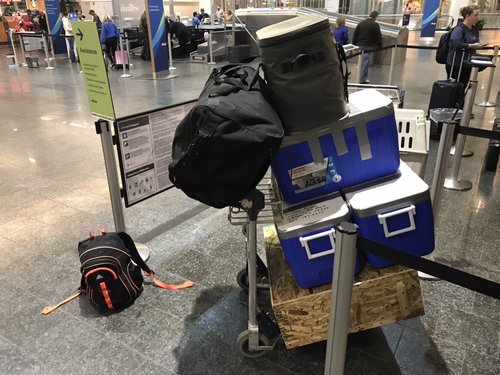 I think this fits the slogan of coming back heavy.

I think I will have one more post to kind of wrap things up and throw in a few tidbits and overall thoughts but it might be a while on it. I get back home at 4:00 pm today and leave out for a week at work in Arizona at 2:00 pm tomorrow so lots of stuff to get done while I’m at the house. If I can’t sleep on the plane maybe I can get it typed up then though.
B

Interesting adventure and nice write up, congrats on the bison!

Thanks for (your usual) very detailed, fun adventure tale.

Congrats, Nathan. Thanks for sharing such a great story here.

Great writeup! Love Bison.Waiting for your plane to land...

Awesome, congrats on a great hunt, and great story.

That’s a bummer about the backstraps I guess I envisioned a giant slab of meat at the hump too. Like a prime rib only wicked long. Congrats on the hunt, awesome write up.

Very cool, congratulations, and thanks for sharing!
T

Awesome story, enjoyed reading it. Your just down the road from me, so it was cool to read a story from a local hunter.

Man, I guess I need to start checking the Live Hunts forum more often—I just saw this. Congratulations on an incredible and incredibly successful adventure!
P