Here is what I found out. When I origionally looked at this offer, it was around $200/day plus lodging. After more looking into it I realised that /day meant a morning goose hunt. Goose hunt for the Afternoon wasn't included for most guys don't do that I guess ?!?!

Anyways. the way it sits right now is the Price for the Goose hunting is reduced to $175 for the Morning goose hunt. If we want to hunt Evening geese it would be Another $100. If we wanted to hunt Pheasants or Chuckar/quail it would be on a per bird basis. Liek $12 per pheasant and $8 per chuckar or something like that. so You could figure $100 for the Afternoon hunt too.

That would mean that there is about $275/day hunting (If you want too hunt evenings too) instead of the $200 I first kicked out there.

The dates I'm looking at are Jan 16-18th. Is anyone Still interested ? I'm done hunting locally so I can HAve time to figure this out. Shoot me a responce and if we have enough people still wanting to go then let's do it !!! If not, We'll figure something else out. time is ticking, Let's talk.

If someone else has an Idea shoot it out to me, I'm open for any/all ideas. We could wait untill later in the Year (Feb 7 - March 7, 2004) there is a Depridation hunt were there is just Goose hunting but it's a no plug, and Electronic calling thing....)
M

This will be plus license, lodging and food.

Your looking at $350.00 bucks a day average.
Sounds a little steap to me

Yep that sounds like a bit too much fer me .

See.. I could use that twards a good Deer or Elk hunt... Looks like that Idea went to Chit real Quick

Anyone else for a bird hunt Idea ?

How about I give you nothing and we go hunt that dam Corn Field this Sunday for Geese ?!?!

I'll have to wait until I see if I am gonna have a hangover....

I don't know that I could put up with you AND a headache!!!

to steep for me too, bummer. cali didnt speak up maybe he will cover the difference for the rest of us

If you guys want to do a duck/goose hunt. Why not make a drive up to Freeze out Lakes in Northern MT by Great Falls. Its a huge swamp, and a prime stopping place for birds on the migration south. some of the lakes are huge and others are just pot holes. The are surounded by grain field so the birds are constantly flying around from them and the other lakes. Hell you can shoot more birds during the middle of the day up there than I usually get to shoot at in the mornings...

You could do the whole hunt for probably $400 pp for the week. Stamps and licences will run you about $75 and there are motels within an hour drive, and some closer. Take along your decoys or just wait for them to fly over the dikes, I've had good luck doing both... The last time I was up there the two of us shot 14 ducks and 4 geese in a morning.

If you hit it the week the snow geese are flying though, you can just about killem with rocks...

Just an idea for you guys, if I still lived in MT I would go for sure. Hell I'd line it up!

The only downfall is that you would have to go early in the year like about the middle to end of October before the water freezes. We used to go quite a bit after the elk rut was over and we were waiting for rifle season to start.

Oh and another thing you can put in for a whisteling swan permit, $3-5 or something. I got drawn 2 out of 3 years putting in. Killed both of them to. Now THEY can take some lead... I wish I would have taken more pictures... Or video, the first one took it 3 time from a 10 gauge before he hit the dirt. One to slow him down, one to crumple him and the last one to make sure. They are easily twice as big as a goose! I felt pretty underguned with a 10 gauge.

Oh and if you got any kind of a bird dog the phesant hunting up there is pretty good too, but there are quite a few people around then.

If you want any more info or if this intrests you let me know and I will try and help all I can.

Bambistew is right, freezeout is a great place. I havent been there for a couple years, but if you hit it right... 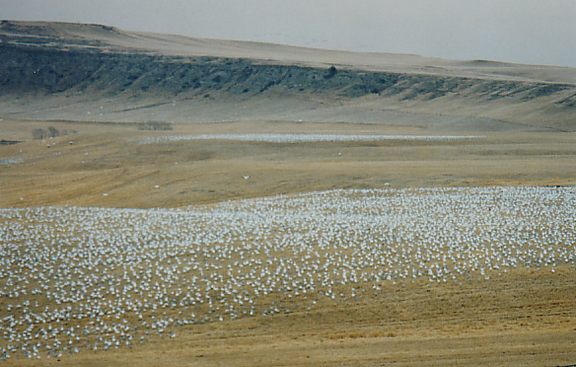 Then you can expect to kill a few birds... 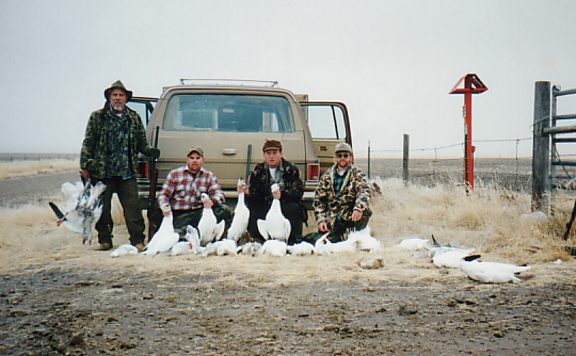 If you draw that swan tag... 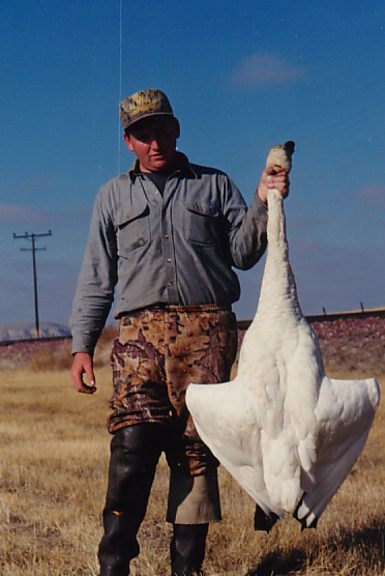 Then after that, we still had time to buy over the counter whitetail doe tags and fill them. Not sure if NR's can still buy them? We also always bagged several pheasants, huns, and sharptails. Freezeout has it all.
B

If the sight of dead animals bothers you dont go to freezeout.

This is the last time a buddy and I went there, we had a blast!

My buddy John, who I helped get started into hunting, looked at the back of the truck, shook his head and said, "Jesus, just think, last year I didnt even own a gun!"

He has a way with words! 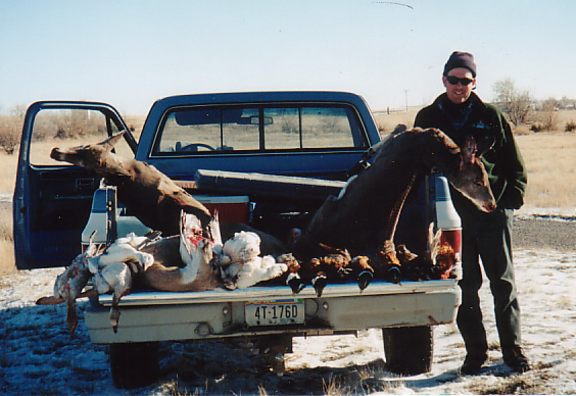 Sh!t Buzz,
How many years does it take for Game populations to recover from one of your weekend hunting trips???

Great pics, and how do you know which Swans are good for killin' and which ones are endangered??

Now that is what I call a mixed bag!
Need a freakin sherpa to pack all the different shootin' irons ya might need for that place

I can't believe what a small world it is sometimes. My best friend moved to Montana for about a year in 2000. He lived in White Fish, near Kalispel. I helped him move there from Phx. I went up for a three day hunting trip for Grouse, Ducks and Geese. Guess were we went duck and goose hunting? Freezeout Lake. It was in Oct. but I can remember if it was early or late. I killed 6 ducks that day. I remember this because I was mad at myself for not getting a limit. When you come up a bird short and have shot a lot of shells it eats you a little bit. We shot about 14 ducks, a snow goose and a canada. We didn't get there very early either. We misscalculated the drive from White Fish and arrived about an hour and 1/2 after sun up. It was cold and windy. The canada, we got, committed suicide. The wind was blowing so hard our decoys were getting pushed up on shore. I was wadding out to reset them when I looked up and a single canadian, was coming right at me ten yards off the ground and 20 yards away. I didn't have my gun, but my friends had their. Six shots later that was one dead goose. The snows were amazing. They reminded me of B-17 bomber formations during WWII. For about 15 minutes twice during the morning it was just waves and waves of snows. It was one of the coolest things I have ever seen involving waterfowl. I think Ivan and Buzz are right, it would be a hell of a trip. Hell, we had never been there before and were late getting there and we still shot birds and had a great time. Montana is God's country. Good Luck, JLG.

So, what happened? How much is the Freezeout liscense?
You must log in or register to reply here.