Wow what a result in the UK

This has been a long time coming, some while ago my friend Stephen (he joined me on a hunt in Montana in 2016/18) built me a shed, he lives around 150 miles away in Oxford and has no access to any land where he lives, his suggestion was a trade, a shed for a red stag (it used to be the business he was once in), sounded like a great trade to me.

But it has taken a while to return the favour, but yesterday it was returned big time.
The Fallow and Reds are rutting hard, and I knew the stags were in my area, they roar like nothing else on earth, so we approached through the valley with the wind in our favour, but all was quiet, we looked across to another farm and could see a stag with around 20 hinds, but it was on a farm I didn't have permission to shoot.
So we carried on, climbing a fence we accessed another farm, we had only gone a few yards and I said ‘freeze!’ Around 30 yards away I saw the ears of a hind flicking, I said ‘get your rifle up’ she approached and saw us, then a staring game ensued, she moved her head up and down side to side as they do, as the lead hind she decided all was well, and started to enter the woods, followed by the other hinds/calves, then the moment we were waiting for, a huge 14 point stag appeared at 30 yards, but he was in a rush to get with the hinds, and his body was obscured, I had to stop him joining them so I gave a loud ‘bark’ and he immediately stopped, I said ’shoot him in the neck’ the 300 WSM sounded off and I said ’crap you missed!’ Stephen insisted he hadn’t, I rushed up the hill to see the stag run around 100 yards and fall over stone dead, it was a WTF moment but then I realised, he had a better angle than I and he had shot it through the lungs, well done Stephen!
Apart from almost getting stuck at the bottom of the field in my truck the extraction went well. 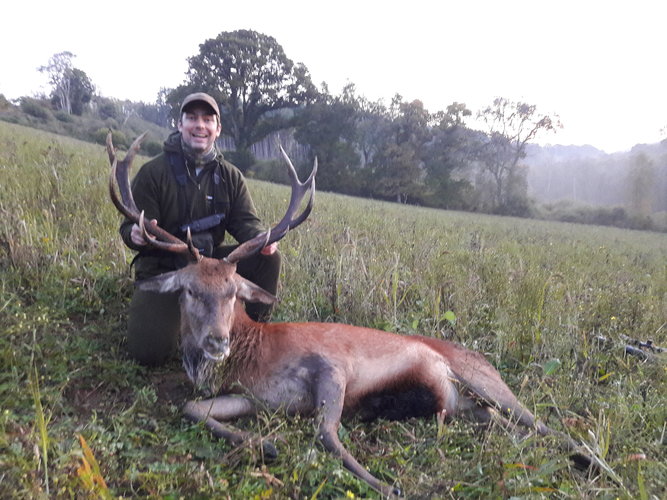 So I said, 'go and have a rest and I’ll see you back at my house later', he looked puzzled, I said ‘lets get you a nice Fallow Buck now!
Different farm where there are no reds, as we approached along the river valley floor we could see the Fallow does but no buck, and the wind was wrong, then suddenly I saw a BIG Fallow buck, it was being chased by a smaller buck but it was hyped up and chased off the big buck and it started to ‘belch’ (it’s a weird sound!) in triumph, then it returned to the does.
We had to make a new plan, we did a big detour, came in with the wind in our favour, crossed a stream and slowly exited the woods, and there he was, he looked completely knackered out, he could barely raise his head, but a doe shifted position and gave Stephen the perfect shot at 155 yards of the sticks, he went down quickly, but the area exploded in deer we hadn’t even seen, we were so lucky not to get busted.

I had a lovely text from Stephen today, saying it was the best days hunting he had ever experienced and was unlikely to improve upon it….we’ll see!

Sorry for the long winded report!

Very nice. The antlers on that stag could easily pass for a Roosevelt elk. Perhaps they are related.

Richard,
You sure know how to get those Stephen/Steven characters into the animals. Nicely done.

Grats to Stephen and another win notch for your assist, Richard!

Enjoy your write-up and pics. Seems Stephen is over himself on the event.
You must log in or register to reply here.

Fallow buck success thanks to the Normans!
2

Success on a Roe Buck
2

My wife is pretty awesome
2 3