I have had a pretty good season so far. I've found wolves with some regularity but could not close the distance during archery season.

I got on a pack the last week of September and long story short, I shot one at about 35yds and watched it drop. I looked over my shoulder trying to pick up another one since there were several others around me. I looked back at the first one just in time to see its tail heading into thick timber. I wanted to throw up. I preach constantly of the need to watch a wolf until he is confirmed dead before trying to shoot another. I searched for nearly four hours, went home, got a good tracking dog and searched some more. Even went back the next day, nothing. That one was a pretty hard loss.

Yesterday, I decided to head up into some remote wilderness that I have not hunted yet this year. Just after daylight and only five minutes into the trip I got confirmation wolves were around when I found a fairly recent track. 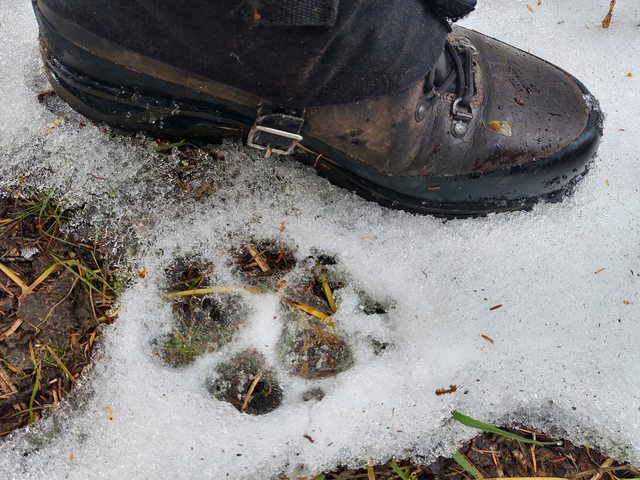 The drainage is about 6 miles long with a decent trail, unfortunately every step for the first 3 miles is uphill. There was a storm front coming in and it was already spitting some snow. Between the weather, the remoteness and the very real possibility of a grizzly encounter I was loaded pretty heavy so that made my travel all the more difficult. I just kept walking slowly, enjoying the frequent opportunity to lean on my hiking staff until I had gulped in enough air to proceed.

The timber was thick with lots of blowdown so visibility was limited. 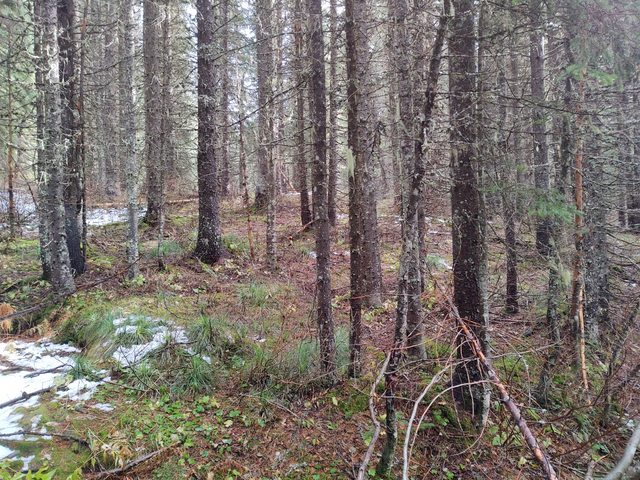 Down low the trail is fairly close to a very noisy creek (small river) so it was pointless to try and call there. I spent most of my time watching out for bears until I got up high enough from the creek that I could hear fairly well. Hopefully any nearby bears could also hear me coming. About a mile in I made a few soft howls but got no response. I slowly worked my way further and higher into the drainage. Every 1/4 mile I would make a few howls in the hope of locating wolves.

My GPS showed 1105 feet of elevation gain at the 2.8 mile mark. When I got three miles in, the trail started leveling off and I could finally enjoy some easier walking. I howled and heard nothing, waited a few minutes and tried again. As soon as I stopped howling the river bottom just a little ways ahead and about 300yds below me exploded with an entire pack calling back to me.

The brush was thick and the slope down to them steep, so I just stood there for a moment trying to figure out what to do next. I decided to try and slip part way down and when I had a spot with decent visibility, I would start cow elk calling. After settling in, I cow chirped for at least 10 minutes but saw nothing. I started to worry that they had winded me. I quietly climbed back up to the trail and howled again. They instantly replied from the same spot as before. I quickly figured out that they were right next to the river and could hear my howls above them but not my elk chirps from downstream and downwind.

Since they were responding wildly every time I howled, I decide to take direct action and drop straight down on them. I howled, they went crazy and I hustled downslope. They would stop, and I would freeze. I would wait a minute or two then howl again, moving only when they responded. This went on for about 15 minutes. I covered a lot of ground and they seemed oblivious to any human presence. I figured out that they were in the very bottom and across the water on the other bank. When I got to a point where I could barely see the water I was afraid to move any closer, I did not want to risk being seen by one of them.

I was still about 50 yards uphill when I stopped and found a place to stand next to a large pine tree. I have been in close like this dozens of times and this is usually when I get busted, so figuring out what to do next is always a crapshoot. I knew they were talkative and not spooky so I just decided to make a few submissive wolf sounds then shut up and see what would happen.

In less than a minute I saw movement through the trees and two wolves were lined out heading straight towards me. Unfortunately I had no clear shot. Moments later I saw two more that were further upstream coming in from an angle that might offer me a shot. By the time I picked the first one up in my scope it was already passing my shooting lane but then the hunting gods smiled and the second one literally walked into the view through my scope at about 25yds. The red dot in my Leupold VXR 1-4 settled on its shoulder. I woofed to make it stop, and bang it was down. The Federal 7.62X39 softpoint worked its magic! It flopped and kicked for a moment so not wanting to risk the loss of a wolf, I tapped it again and it was over. The others were gone, probably at the first shot. 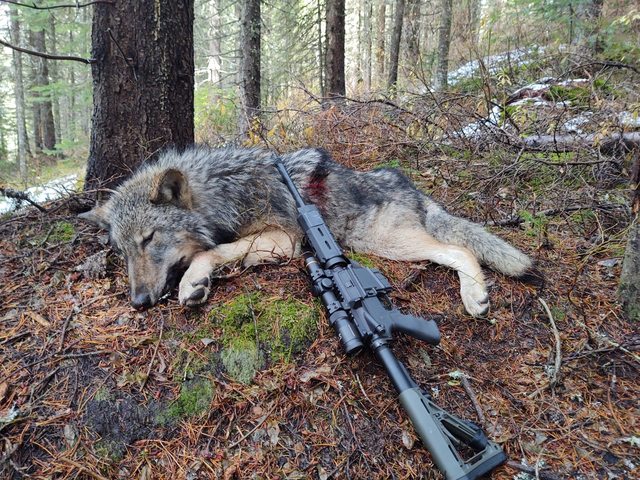 I walked over to look at the wolf. It was a female approximately two years old with a wonderful coat. I notched my tag and took some pictures. 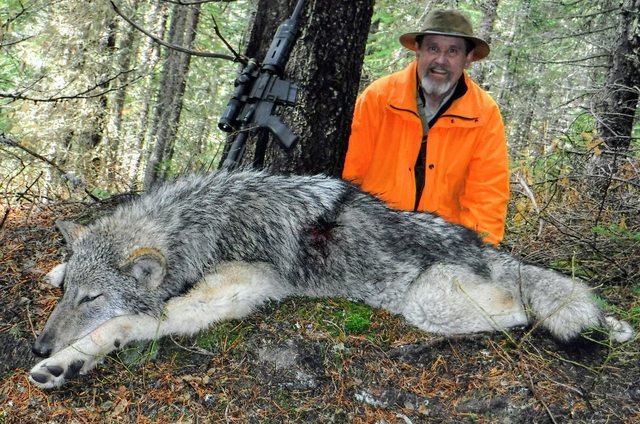 I used my little Fuji camera that can be controlled via Bluetooth from my phone for some shameless selfies. 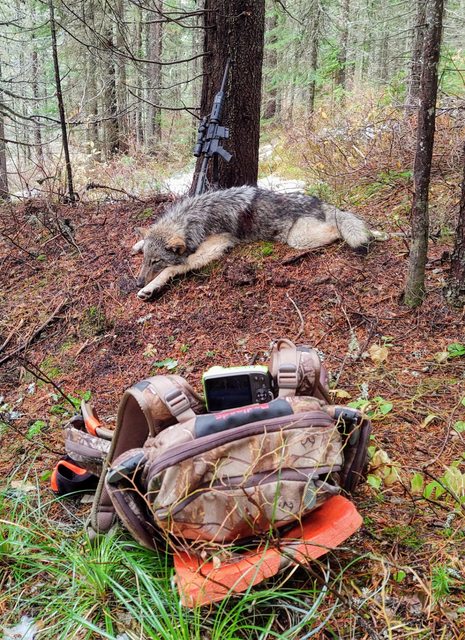 While I was doing all of this, the pack was halfway up the other slope, howling and aggressively barking. It literally went on non stop for a full 20 minutes. I considered trying a sneak up there for another shot but I didn't want to cross the river and I had one serious drag ahead of me so I passed. Complicated by the fact that I discovered my drag bag was still at home.

The pull up the slope to the trail was tedious but I finally made it. I was then able to just pull her behind me for about a mile since the trail had about an inch of snow. The second mile was patchy snow turning to wet grass as I lost elevation. The last mile was short wet grass, sticks, rocks and dirt and I didn't want to wreck the fur dragging through that. I used a little "xmas tree" as a travois and made it most of the way back to the trailhead before finally having to carry her to my truck. 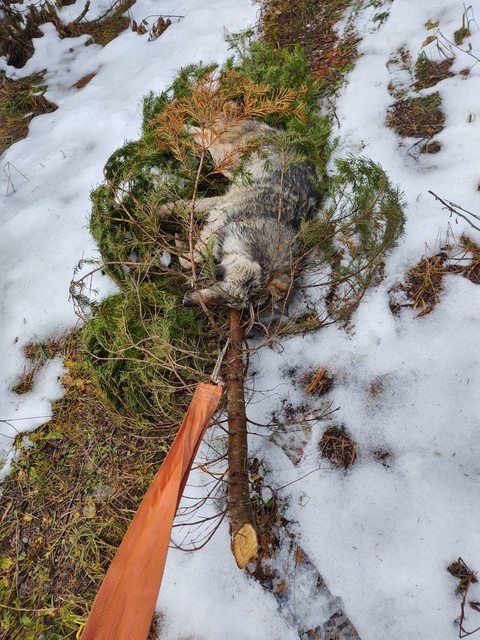 It took me two hours and forty nine minutes to cover three miles downhill without damage to the hide. It was a lot of work but my taxidermist skins a whole lot better than I do and my neighbor loves the meat so it was worth the effort to get the whole carcass out.

I went back in there this morning on the remote chance they might still be around. They were not! Still it was a grand adventure and I got to enjoy the quiet of the snow falling in some big country.

That’s awesome,wolf is definitely a bucket list item for me.

I have read some of your other posts. You definitely have this wolf hunting figured out. Congrats!

Very nice! Good to see your efforts paying off!
D

Great story!!!! Congrats keep it up.

Location
Bozeman...Seeley when I can be there.

So I'm interested in trying my luck this winter. What are you using to call? To howl? Anything in particular you look for when you choose an area to hunt?
J

2ski said:
So I'm interested in trying my luck this winter. What are you using to call? To howl? Anything in particular you look for when you choose an area to hunt?
Click to expand...

As for areas, anywhere there are no people. Usually at least a mile behind the gate just to get started.

Very nice coat, will you sell it or make something for yourself or family to wear with it ?

Were you able to determine the size of the pack ? They usually run in packs of 5 to 7, but have seen packs of 20, in our area. Watching them take down a moose or muskox is impressive, and quick ! In Nunavut, some are not afraid of humans and two or three will walk up to within a few feet of you.

Enjoyed your story, excellent hunt, congratulations on harvesting one with such a nice coat.

We do have more than wolf hunting in common, we both use non, run of the mill calibers

It sounded like there were probably six or seven in that pack. I just have the hides tanned then hang them by their nose. I'm working my way down a long hallway . A friend of mine has bugs and we clean and bleach the skulls also.
W

Great hunt and story, but you lost me when you said, "my neighbor loves the meat." Can you talk more about that?
P

Jcs271 said:
It sounded like there were probably six or seven in that pack. I just have the hides tanned then hang them by their nose. I'm working my way down a long hallway . A friend of mine has bugs and we clean and bleach the skulls also.
Click to expand...

thanks, that is usually the pack size we see as well. The hall wall sounds pretty darn cool, good idea. We occasionally will trim a clothing item, but usually sell them, use the teeth for ornamental things, usually like a necklace or bracelet. We sent some to a member of this forum once.

wisconsin hunter it happens, but not often. Also sometimes some of it is used for the dogs, but usually left for the wolverines.

There was a thread about killing, harvesting, and/or hunting animals. Some of our ancestors had to sleep outside in a tent for "one moon" after killing a wolf. My husband thinks that might be why we have so many of them, people quit killing them.

jcs271: that is a beautiful coat, it will look good on your hallway wall. Congrats !
J

I have BBQ'd several of them and my neighbor loves to cook it in his smoker. I saved about 1lb for taco meat that a co-worker is fixing for our work party.

Remember, it's just recycled elk meat.
You must log in or register to reply here.