Who Is Not A Hunting Celebrity?

Well myself and a couple coyote-hunting-clowns had a really good time out here in Montana last week. We caught a lot of fish and managed to kill a pretty decent pile of coyotes as well. Here is a photo of the Three Musketeers together with one of several coyote kills. I'll give you one hint; only one of us has not been on a hunting show. So of these three who has managed to stay away from the lens side of a TV camera? 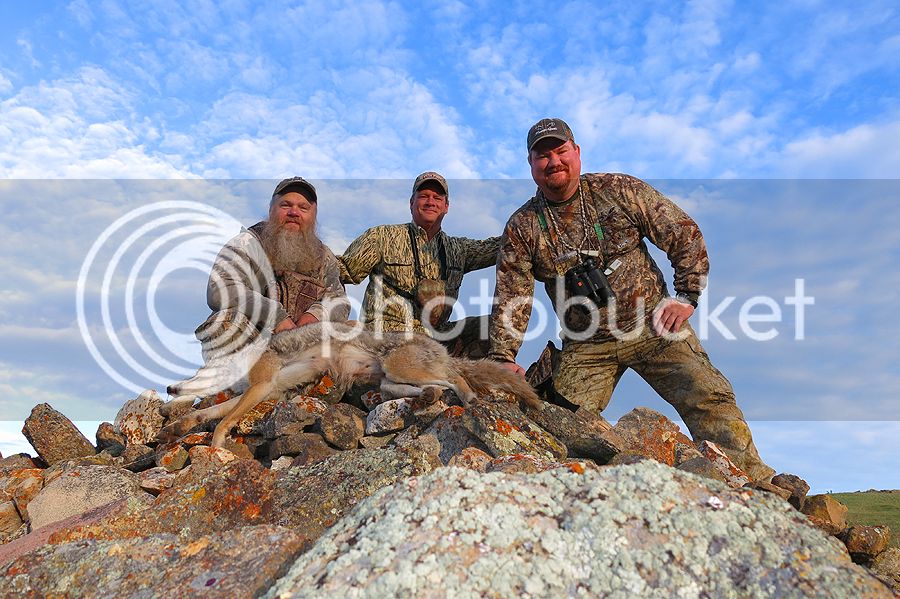 I pick the clown in the middle!
B

I guess I need to watch more tv. I only recognize Big Sky

JCS said:
I guess I need to watch more tv. I only recognize Big Sky
Click to expand...

Me, I'm just the lucky guy that got to hunt with these two characters.
Tim Spike Davis (the cartoonist for predator XTreme magazine) and Matt Piippo (who is Les Johnson's right hand man with Predator Quest) was a total kick in the butt to hang out with. If anyone ever has a chance to hunt with either one of them, you should jump at the chance. Tim Spike Davis has a great sense of humor and will keep you smiling. Matt Piippo has booming voice and is a larger than life type of person. He is pretty dang funny in his own right, but his incredible skill at hand calling coyotes is absolutely amazing. He makes the most realistic coyote vocals of anyone I've ever met or hunted with. In fact there are times I have a real hard time telling whether it's Matt or a real coyote. He is that good! Anyway we piled up the coyotes and caught and released a mess of fish. It was a great few days. The hunting and fishing Gods were good to us. [Smile]

Guy on the left has too cool of a beard to have any job other than in outdoor television.

Guy in the middle has a smirk on his face only a rich man could have, so he has a TV show too.

Guy on the right looks like a normal everyday hunter. So he hasn't been on TV.

I don't know which one you are but that's my guesses ha - I make all judgmental profiling opinions with the upmost respect. haha looks like a fun hunt!
You must log in or register to reply here.

Hunting in the wind?