I had an animal down at dusk 30 yards from my tent this year in grizzly country and saw a griz relatively close by.

I didn’t get a lot of sleep that night.

I bet you’re more likely to die in a wreck on the way to the trailhead than to be killed by a bear. That’s in a tent or anywhere else, for that matter. Probably more likely to get stuck by lightning during archery season or fall to your death. The point is this is a dangerous pursuit that we enjoy. Just be careful and don’t worry about the unknown.
M

UDAP backpacking bear fence used it a few times, you,d be surprised what a couple of d batteries will do. Easy to set up and take down.

If I remember correctly, this was a black bear.

I sleep better with a fence, handgun or spray - usually have a combination or all of them. I also realize they are just to help me sleep better.
R

If I remember correctly, this was a black bear.

I sleep better with a fence, handgun or spray - usually have a combination or all of them. I also realize they are just to help me sleep better.
Click to expand...

It was a Grizz, I was thinking of the same story, but it is still very rare to get attacked in a tent.

My wife and I put our backpacks next to the outer tent walls, have bear spray and flashlights handy, as well as an escape plan. Everything with the least odor gets hung up high in the bear bag. It is odors more than anything that attracts bears. I gave up backcountry fishing because the last thing I want to smell like when sleeping in my tent ... is a freshly caught trout!

Having last week come upon a horrendous truck - sedan wreck at night on Hwy 191, where the sixteen-year-old girl was trapped in the sedan with the whole front end and driver's door wrapped around her like a crunched beer can, I concur with Southern Elk regarding the risks. The girl is a classmate of our grandson, Bode, and a sweet girl we have known since her kindergarten year. On the phone with 911 and assessing the damage and potential injuries to someone whose face was covered with debris and oil, I was pretty well calm and composed until she said her name, at which time you could have knocked me over with a feather. Fortunately, it turned out she had a fractured femur along with bruises, aches, and pains, but it sure looked a lot worse initially. (Be thankful for airbags and seatbelts.) Anyhow be careful out there, especially on the roadways, but also in the outback where the bears can smell your elk or your trout from miles away.
Last edited: Feb 7, 2019

It is true grizzlies love Coleman fuel. I had an elk camp in 2009 that I couldn’t get out due to a huge storm that dropped about 4 feet on it. We went in with horses in the spring but didn’t beat the griz to it. Every fuel canister was crunched multiple times.

Used to patrol Bridger Teton Wilderness focused on bear compliance by private and commercial outfitters. During our 8 day routes to differing locations, there was a defined difference in the preparations for clean camps with a food/game location a good distance away and those discovered with a Jim Beam / JD bottle, pannier(s) etc around the sleep area. Only items we kept in our main camp when not in a FS structure was water. We went to extremes to include carmex, wetwipes, etc... though when packed separately in their own stuff sacks, easy enough to secure. We had our bear "proof" panniers, etc about 70-100 yards from camp.
Never had a problem at our camps. Horses picketed / hobbled probably helped.

A clean camp = a much better sleep.
S

A clean camp = a much better sleep.
Click to expand...

Bambistew said:
By a grizzly or black bear?
Click to expand...

Grizz. Must have been in the WY book. Read ~3/4 way down the story for the reference. Full story sounded terrible, though it had to be reconstructed based on the evidence as she was long when it happened.

When I was researching my book, Great Montana Bear Stories, I camped out at just about every location that someone had been killed at night by a bear. Trout Lake. Granite Park. St. Mary Campground. Many Glacier Campground. Elizabeth Lake. All these cases (which are spread out over 50 years) involved bears that had made a habit of eating trash or raiding camps. That's why it's imperative to keep a clean camp. I've also tried to drive "Food conditioned" bears out of camps and had them eat every scrap of food I had, in spite of shooting over their heads, barking dogs and (once) hurling a pulaski at it. The tragedy is, it's rarely the slob who pays the price for feeding the bear. It's the next poor guy to come along. In spite of all this, I can still sleep in grizzly country at night, but am prepared for trouble if it comes. Electric fencing seems the best deal if you don't mind the cost and weight.

It was a Grizz, I was thinking of the same story, but it is still very rare to get attacked in a tent.

That is a crazy story. I am surprised that of all the people in the camp ground, no one had a gun.

I think that while a fence might be the best choice for safety, it is pretty heavy and because of that, I don't think it would be for me since I always seem to be moving. Now if I was doing just some backpacking/fishing trips or if my wife/kid was with me then I would be taking a fence for sure since weight wouldn't be as big of an issue.

The prices aren't really as bad as I expected.

Bluejeep said:
That is a crazy story. I am surprised that of all the people in the camp ground, no one had a gun.

I think that while a fence might be the best choice for safety, it is pretty heavy and because of that, I don't think it would be for me since I always seem to be moving. Now if I was doing just some backpacking/fishing trips or if my wife/kid was with me then I would be taking a fence for sure since weight wouldn't be as big of an issue.

The prices aren't really as bad as I expected.

That's where I'm at, me and a hunting buddy can just deal with it, but if my kids are there I'm probably going to use extra precautions.

Redside said:
It was a Grizz, I was thinking of the same story, but it is still very rare to get attacked in a tent.

Pretty rare but has happened occasionally in Alaska:
http://www.nbcnews.com/id/8371132/ns/us_news/t/grizzly-kills-couple-alaska-campsite/#.XGCM6lVKj3g

I like a portable electric fence that run on D-cell batteries,
as the last thing I want to discover is a shredded tent
when returning to camp after a long day.
http://www.adfg.alaska.gov/index.cfm?adfg=wildlifenews.view_article&articles_id=174

Had a young grizzly come into camp once, woke me up from a nap. Peeked out of the tent to see him knocking stuff about that we had outside. Woke my brother and looked out again to see him chomping on a 5 gallon gas jug. Gas squirting. The bear began rubbing his head on the front bumper of my wheeler. When he stood to explore the wheeler some more, a 7mm round punched him through the chest. As he rolled and got up standing broadside, a 300 round tore into the shoulders. criss, crossed, dead bear. Have had bears get onto hanging meat. 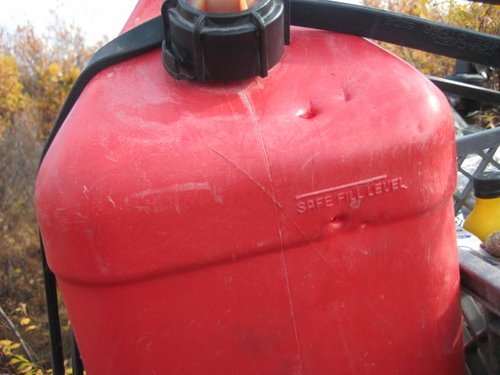 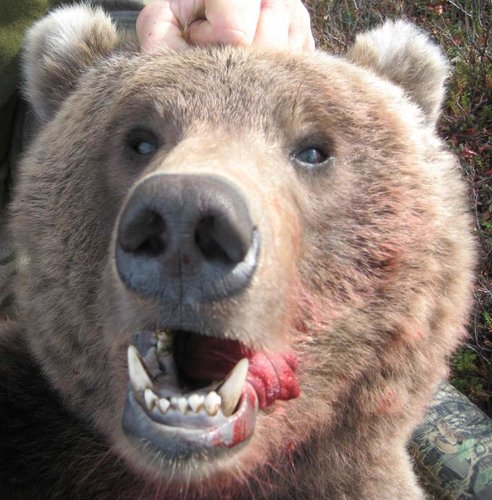 I've never used an electric fence. Our method has always been to create a "piss fence" around camp. Gives them something to sniff about.
Found a nice bull that year also! 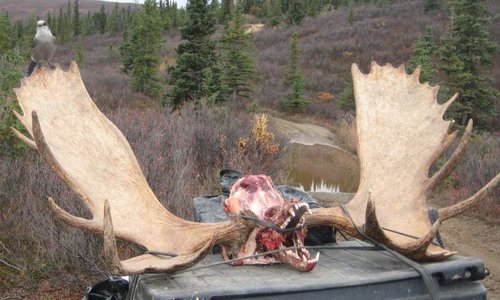 A clean camp = a much better sleep.
Click to expand...

Follow the "bear-muda triangle" strategy.
The "bear-muda triangle" strategy involves distancing your sleeping area from your food storage area from your cooking and dining area. The layout generally goes something like this: You're going to make a triangular floor plan, with your tent in one point of the triangle, your food storage in another point, and your cooking and dining area in the third point, with around 100 yards between each point. Your tent will also hopefully be upwind of those other two food friendly areas.
P

Interesting seeing how differently some approach sleeping in bear country. Seems like encounters are getting to be a lot more of a problem in WY and MT while folks in AK seem to be more comfortable with them. I believe I read around 40 griz were killed in 2018 just in Wyoming.

On the bright side it lessens the hunting competition in those parts of the state as many, including myself, are not interested in having a bear encounter. I was even cautious around at DQ in Cody before exiting the truck after a bear was sighted nearby this summer. I figure throwing the blizzard would be as effective as bear spray in that situation.

If you want a good bear story this is happening right now. I thought having bears at DQ and the kids corns maze for Halloween was crazy, this is f-in wild.
https://www.cnn.com/2019/02/11/asia/polar-bears-russia-intl/index.html
G

A few years ago, a couple were attacked and killed inside their tent. They had been floating one of the North Slope rivers and were camped on a sandbar. No provocation was discovered.

Tim Tredwell went out of his tent to "scare the bear away". After killing Timmy, the bear proceeded to kill his girlfriend, who I believe remained inside the tent.

Both incidents occurred in AK, where bears are not protected and have some reason to fear humans. In the lower 48, where they are not hunted, there is every reason to fear an unprovoked grizzly attack.
Maybe the best way to protect yourself would be to catnap during the day, then sit up all night (with gun in hand) to ward off a bear attack. (Tongue-in-cheek, there.)

Part of my retirement plan is to amass a savings to last me 30 years, then when that runs out go camp in grizzly country Ala Legends of the Fall....

By then I shouldn't have to drive too far and the whole Rocky Mountain front should have a good bear population....

Sytes were you USFS? What years? I 've been in BTNF during elk season just about every elk season from 2006-2015 Wonder if I ran into you in that time....