One day to hunt MT

A doe came out. I turned on the camera. A buck came out. He accosted a tree. I shot him. 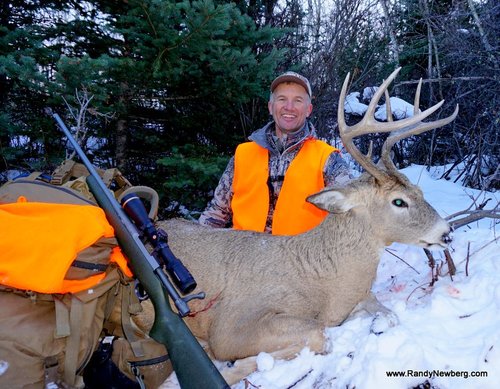 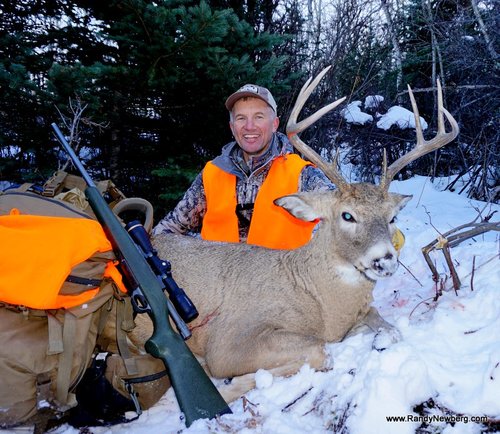 Congrats.
The picture has better clarity than most, new camera?

Sometimes the one day hunts.are the best !
Congrads Randy

WapitiBob said:
Congrats.
The picture has better clarity than most, new camera?
Click to expand...

Yes. Keen eye you have. I am now using the Sony Mirrorless A6000 and I love it. Lenses are easy to get and this is the best "tweener" I've ever found that covers that turf between a point and shoot and a DSLR.

The video quality is excellent. You will see a lot of video from this camera being used in the show. The AK Sitka killed by my buddy Jim was filmed on this little hand-sized jobby.

Nice buck Big Fin. Looks awsome with all that snow, was hoping for some in Mo but it melted as it hit the ground.

For kicks, I went to see if I could locate whitetails at 6,000' on NF. I did. This was buck #6 for the day. The others were too fast for a guy who was filming himself and trying to shoot a deer at the same time. Too bad for him. Real good for me.
R

We've been chasing NF whitetail the last handful of days, but I can't talk anyone into pulling the trigger.

I double dog dare you to go kill one in Idaho now. Pick me up on the way.

We've been chasing NF whitetail the last handful of days, but I can't talk anyone into pulling the trigger.

I double dog dare you to go kill one in Idaho now. Pick me up on the way.
Click to expand...

If wife was not taking care of her Mom in Vegas right now, I would be on your doorstep in about four hours. Too bad ID season closes the day she gets home.

That is a great one!

Well done! That looks like a lot of fun.

Nice buck, Randy! Hoping I find something like that in a week once muzzleloader starts here.

Way to protect that tree. Timber accosting whitetails such as that deserve to die. Congrats on a good buck! I've spent a lot of days in the woods this fall and still haven't seen a buck that big while I've been hunting.

Congrats on a nice whitetail. Just curious, when you're out alone and filming is this for the show or just for yourself?

Gerald Martin said:
Way to protect that tree. Timber accosting whitetails such as that deserve to die..
Click to expand...

very nice. I don't know why, but i've always liked the word accosted.

fishing4sanity said:
Congrats on a nice whitetail. Just curious, when you're out alone and filming is this for the show or just for yourself?
Click to expand...

For the show. No camera guy was available that day. I normally would not film a one-day hunt, but we've had such bad luck and tough breaks this year I decided to film it for the show. Now that I see the footage of me running two cameras and how lucky I got that the buck walked into frame when I had just finished filming a doe in the same spot, I think it will make a good episode.

It was windy that day and the audio reflects such. I knew it would be tough for me to film it myself. I knew if I killed something my knee would not allow me to pack it all out in one load.

Yet, I had hoped to shoot something and give an episode with a message that even if you only have one day and even if the conditions aren't good, you can't kill one on the couch (advice that still sticks with me from MTmiller when in 2008 I was thinking of bagging the last day of a KS hunt, only to shoot a buck in 60mph winds). So, I went out to a spot a lot of folks drive past, sat on a timbered ridged where I have bumped whitetails while elk hunting, and just sat down with my two cameras and tripods.

At 200 yards, he emerged to rake a tree for 1:20 minutes; enough time for me to get the cameras set up, focused, and the rifle dialed for a shot. The vapor trail on this chilly morning is really cool. I did my best to fill in the story that morning in the dark, while on the mountain, and when I got to the truck that night. Guess we will see. I made big apologies from the beginning that this is me filming and hunting at the same time, so the audience would not have high expectations. If it won't work for TV, I guess it will be one of our web exclusives.

Good deer, congrats. I'm taking my wife opening morning (next Monday) here in Ohio. I have a new 45-70 that needs broken in properly.
You must log in or register to reply here.

D
How to gauge deer size?
2

My best SC Whitetail (They are chasing for sure)