Took my 14 YO son on his first ever mule deer hunt. We weren't very successful with some of our earlier draws, and settled on this unit as we "should" draw it and considered it an opportunity to hunt an area we have never been. I knew it would be a tough hunt as there were a lot of tags for earlier season, but hey we would still be hunting. We didn't arrive to the unit until the evening of opening day. We went to an area I wanted to start at in the next morning and slept in the truck. Next morning we got up and hiked to a canon to do some glassing, we didn't turn anything up so we hiked down to the bottom and up the other side to glass another canon, still nothing. We decided to head back to the truck and head to another spot, the afternoon hunt was cut short because of a misty rain/fog that had moved in and never lifted. It cut visibility down to 50-100 yards. 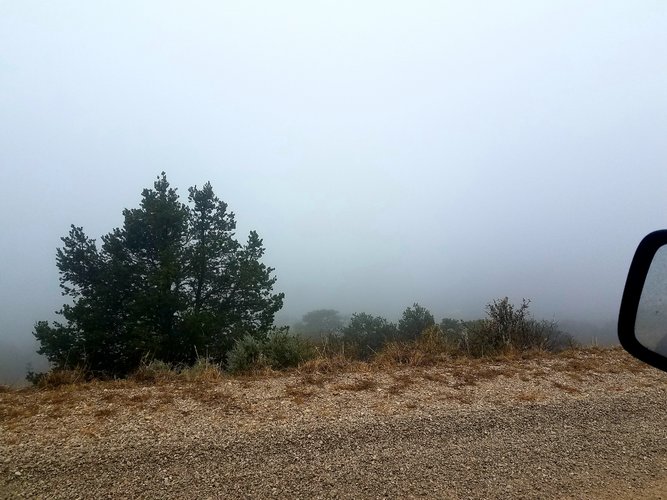 Seeing it wasn't going to lift, I went to the next morning spot so we could get ready for bed and be close in the AM, we slept in the back of the truck on air mattress this night. We wake up and get ready and my son makes the comment this is going to be a good morning, 5 min later on a 2 track my low tire light comes on and we can hear hissing. I grab the plug kit real quick, dig the rock out that punctured the tires and plug it real quick, but its still leaking, so I grab the fix a flat and put a can in, and drive back out to the gravel road and put a couple miles on per instructions. Hey its holding. We drive to another area because as we were pulling out 2 utv's were driving into the bottom of the canyon. Winds continued to pick up, radio was calling for 40-50 mph winds and this time I thing weather man was right. We hiked to some areas looking for deer out of the winds and drove glassing drainages. Glassing in this kind of wind is a PIA, but glassed up a deer about 500 yards from road, but can't see the head. We use the wind to our advantage and get to a bush 30 yards away, dang its a doe. I decided to see how close we could get and was able to get to about 5 yards, just on the other side of the bush from her. Wind swirled she stood up, looked around and just walked off. We ended up glassing up some more doe later but no bucks. We drive closer to another area I wanted to check out and make camp for the night.

Day 3 we are up and ready before sunrise again and are hiking to and area to do some glassing. We hike to three different drainages and are only able to turn doe's up. So we head to a new area a little further ways away. Two tracks were much more truck friendly and wasn't seeing any other 4 wheelers or SXS's. I told my son this is good for us, or there is no deer up here. Well not saying there was no deer, as we found plenty of sign, but didn't see a single deer in that area. We didn't hunt to dark as I wanted to go to another area in the AM that was far away.

Day 4 were up and at it at sunrise another do our usual hike to some glassing spots and didn't turn anything up, so wile heading down the 2 track up into the mountain further, we would stop and glass every drainage we could. My son turned up 4 cow elk in one drainage but no deer. We get way back in and hike to some more glassing spots. Crossing a bear and about 10 turkey along the way. We get into an area that has a deep drainage, but only find a couple more doe. It was one of those drainages You would swear there would be a buck in there, but hope not because you didn't want to have to go down it and pack out lol. We watched that drainage for several hours as it was actually 3 separate ones coming together.

Day 5, its thanksgiving! I can tell the hunt is starting to wear on my son. He was a champ this hunt, but I made sure to move at his pace and not mine. He was already saying we should hunt tomorrow morning and if nothing we can go home. Well are back in a spot we had glassed up some doe in a drainage a couple days before. Nothing in that drainage, so we hike up a ridge and there is a bowl you couldn't see from the road. I tell my son, this is where I would hide if I was a deer. Well 5 mins later I happened to look back down and a buck is heading out of it and up the other side. We try and get set up, but every time he stopped he was behind something, and over the top he went. We get to the top to see if we can tell where he went, he could have went over and down or over to the next drainage. If he went over and down we wouldn't be able to see him as that side was to steep to see down, so we hike to two more drainages and don't find him. So we head back to the truck and drive around to the other side to see if we can glass him up, but fail to. Now its lunch time and time for our thanksgiving feast. A non traditional meal, but this worked out just fine for this day lol. 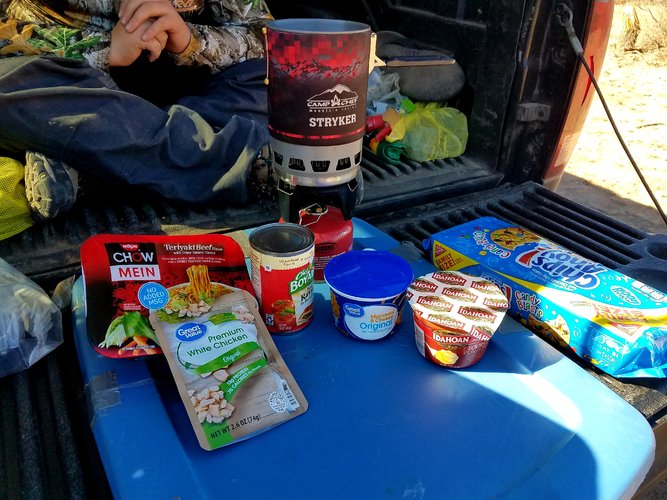 We keep going further into the BLM in that area glassing and looking. I get on a two track that was muck more suited for a SXS, but we push on, I come down a hill into a nasty wash out. No where to turn around and didn't want to try and back all the way up the hill as it was to tight for that. I pushed through scrapping the front bumper on the other side. Less then 1/2 mile later another bad washout, but was able to gather to only minor scrape the front bumper. Well I don't want to have to go back out of there as I knew it would be worse the opposite direction. We follow the trail that goes up a big hill and continues to get steeper and more rocky. Well we made it to the top with the truck only losing traction once, to only find that was all the further it went, even though map showed it continued. So we turned around and back down through both nasty drainages, this time scraping front and rear bumpers, but powered through. We keep going glassing, climbing hills to glass, only to turn up doe. Well on the last walk down the mountain my son said well at least we had fun, even though he didn't get one. I told him its not over yet, and asked if he wanted to still hunt in the AM. He said we would probably call it at end of the day if no luck. I was thinking the same because I was still fighting tire issues and almost out of plugs. Well on the way back out of this area, I see a bunch of deer cross the 2 track couple hundred yards in front of us. We are glassing them over and I manage to find a forky with about 15 does. We get out of the truck and grab the sticks and move higher to try and get a shot. We moved to about 100 yards within them and had to wait about 5 mins for a clear shot. My son made a perfect shot and dropped him in its tracks. I high fived him, and told him see I told you it wasn't over. We drove to where is would be a shorter pack, took some pictures and started quartering. 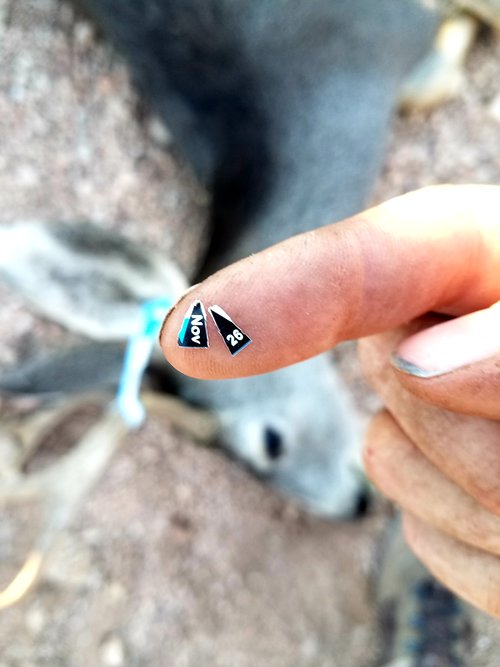 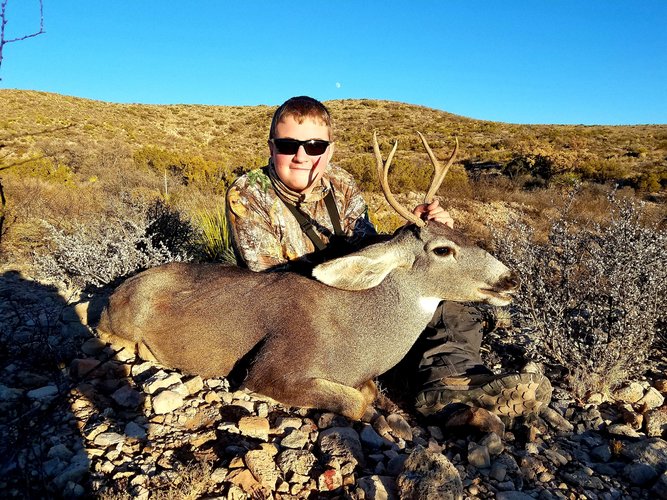 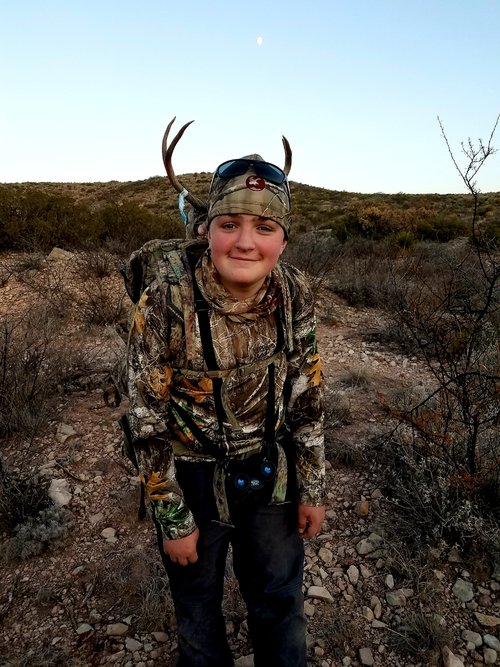 I didn't readjust the pack to fit my son, so he was a little off balance, but only had to go a couple hundred yards down hill with a easy grade.

Recap on the hunt, this is a huge unit and hard to scout from the computer. Would do it again but only if I had a 4 wheeler or SXS to get into some of the more remote areas. Bad part on timing is there was an early archery, muzzleloader and two other rifle deer hunts before this one. Not sure about elk or anything else. Everyone we talked to in the unit was nice and most offered advice, a lot were shocked that we drove all the way from IN for that hunt, I guess that should be an indicator? Its hard to compete with people who cruise around on every trail on a 4 wheeler or sxs all day long. We glassed more on this hunt then any other I have been on, and I don't think that's my cup of tea for hunt style. 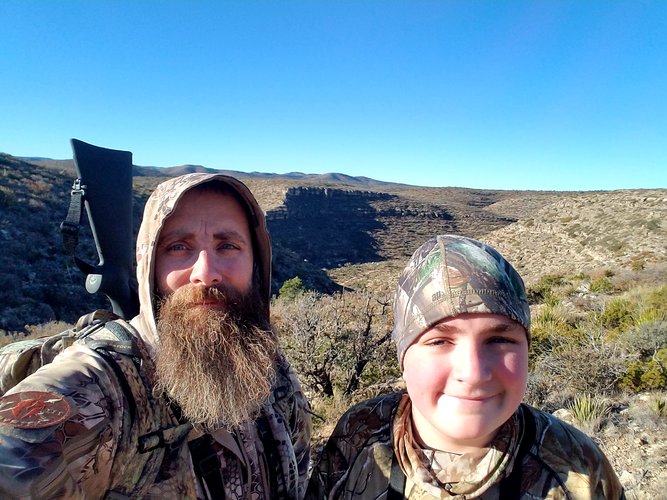 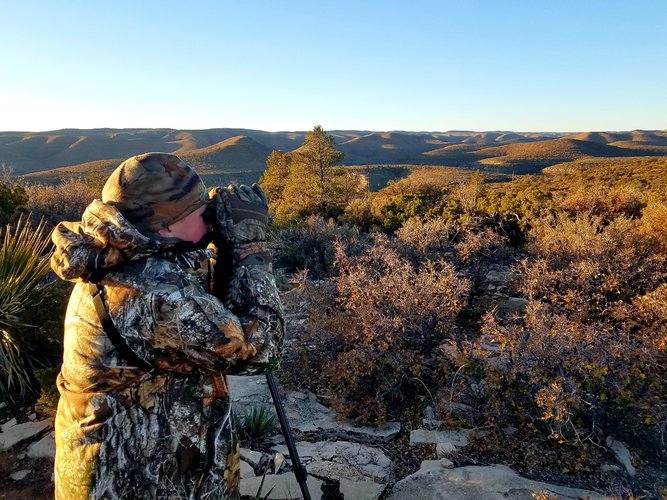 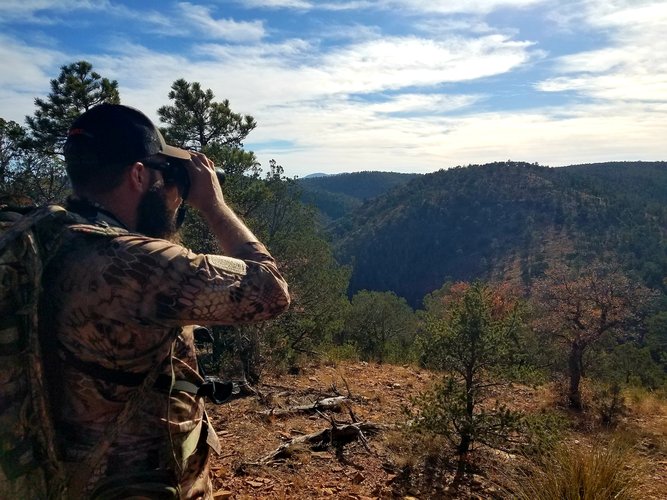 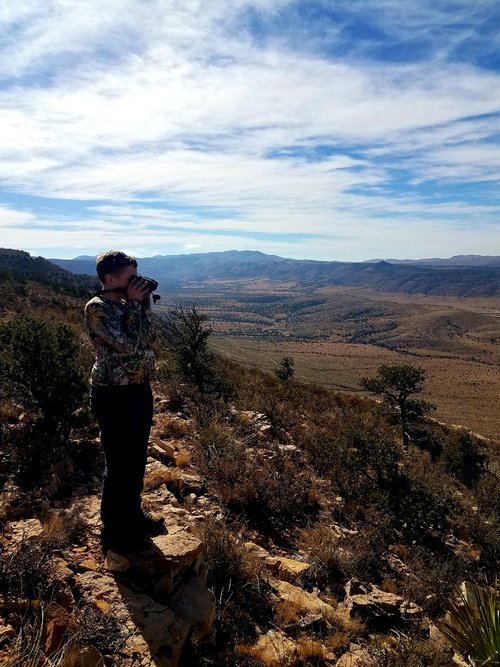 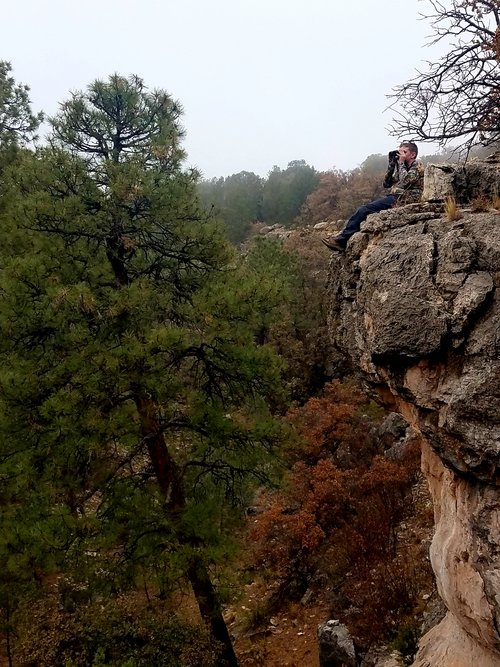 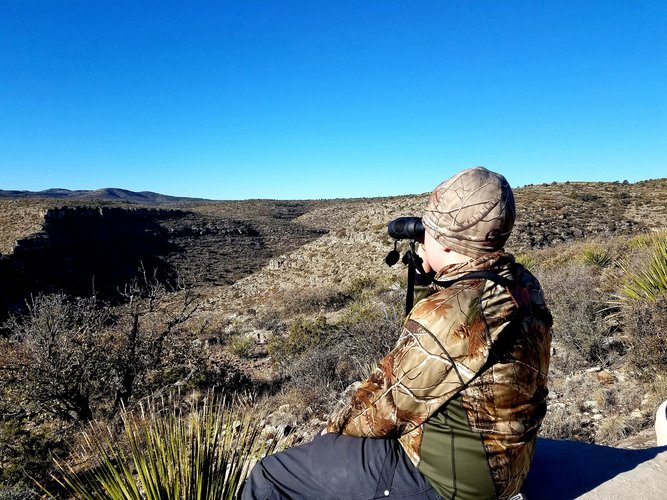 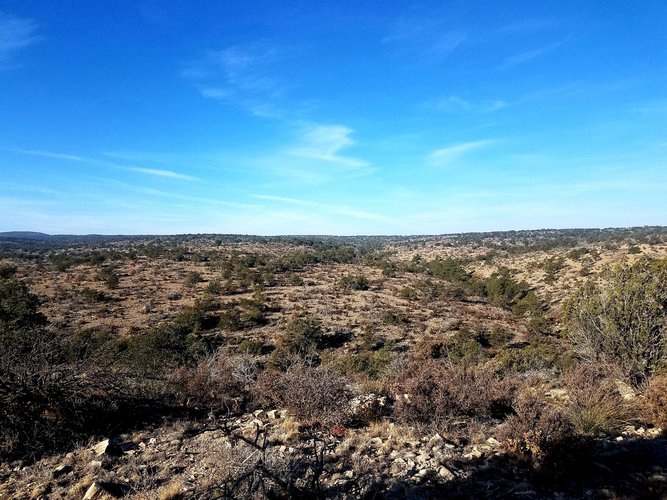 Some of the vegetation that will poke you if your not careful, also plenty of short and long thorn bush/trees around. 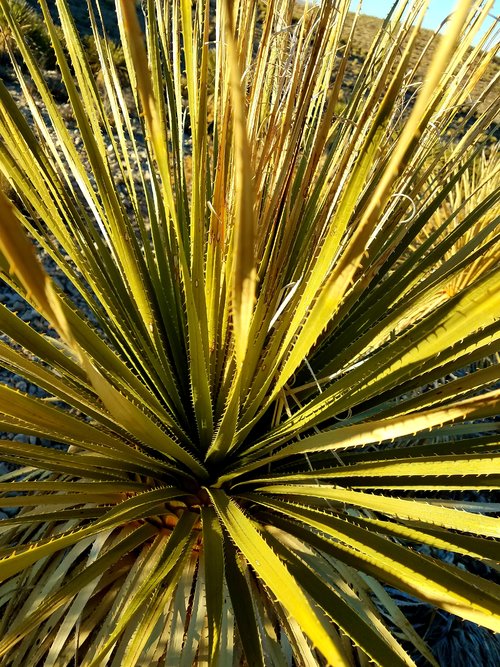 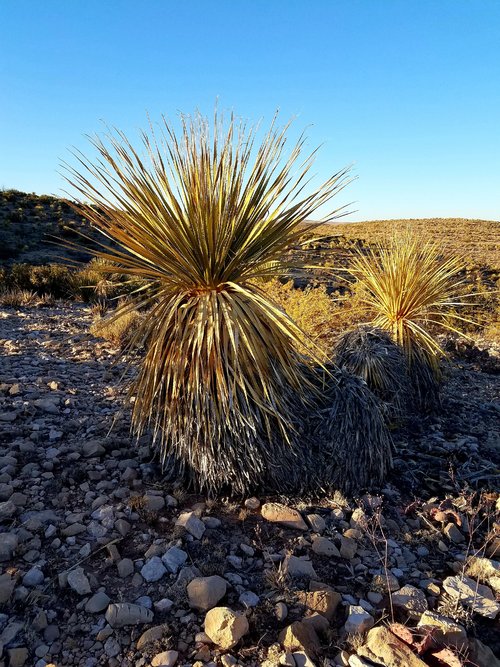 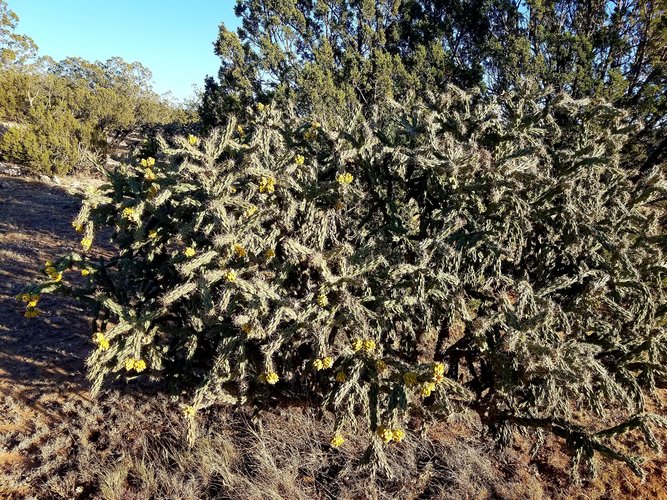 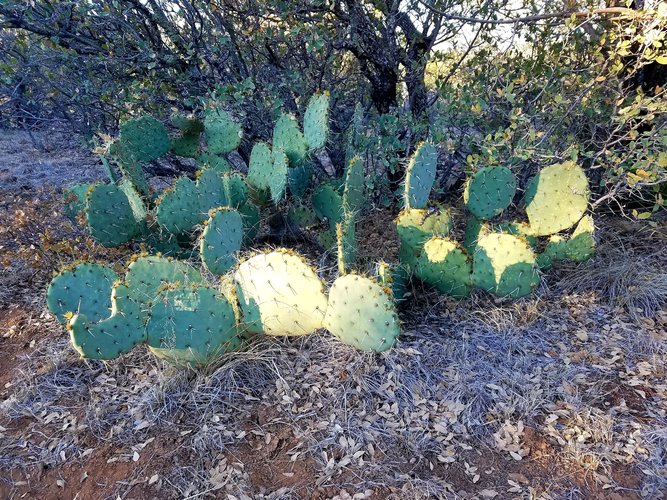 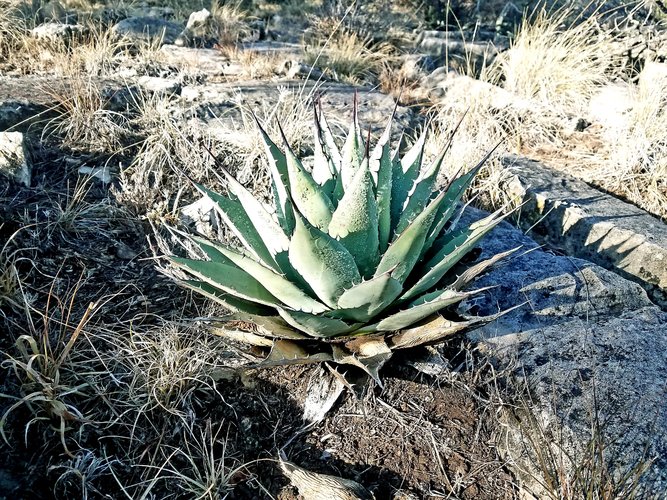 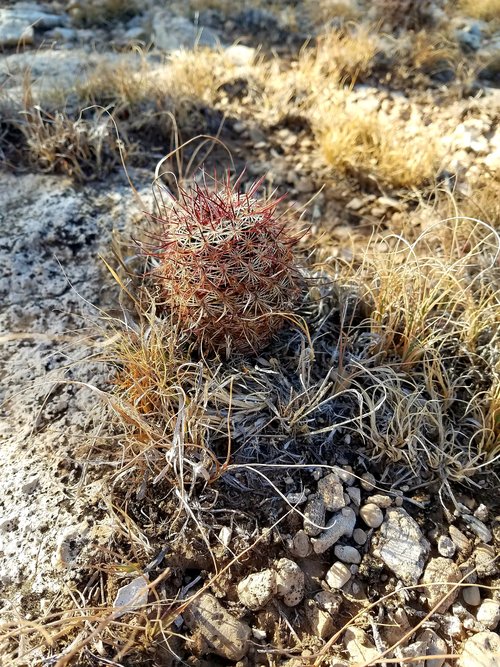 Found some interesting rock impressions also, not sure what to make of the first one as it was about 6" deep. Also found a rock that was almost perfectly round. 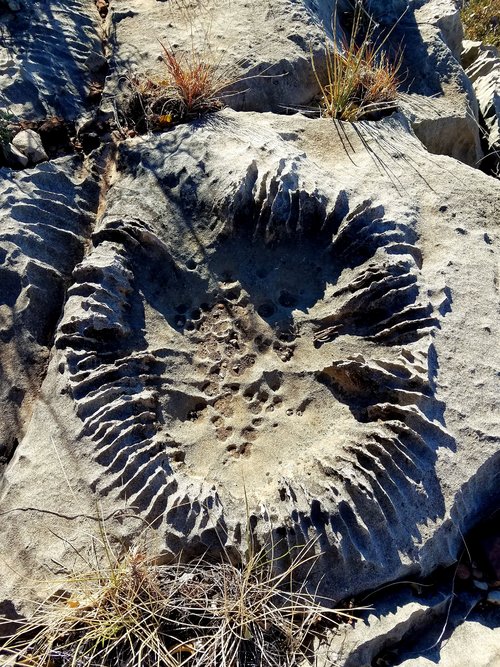 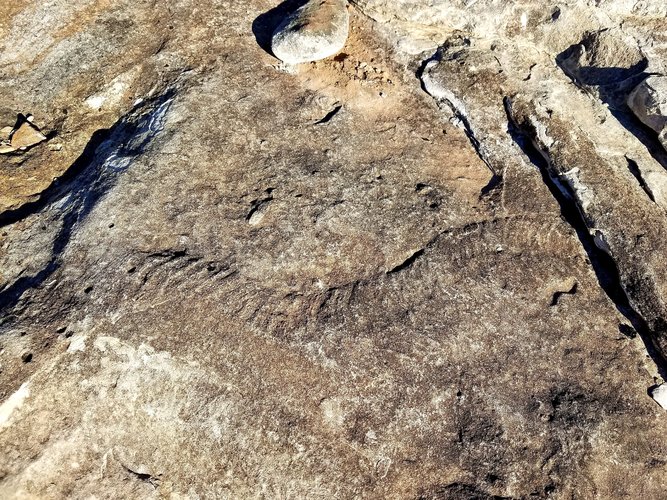 Car that didn't make the curve? 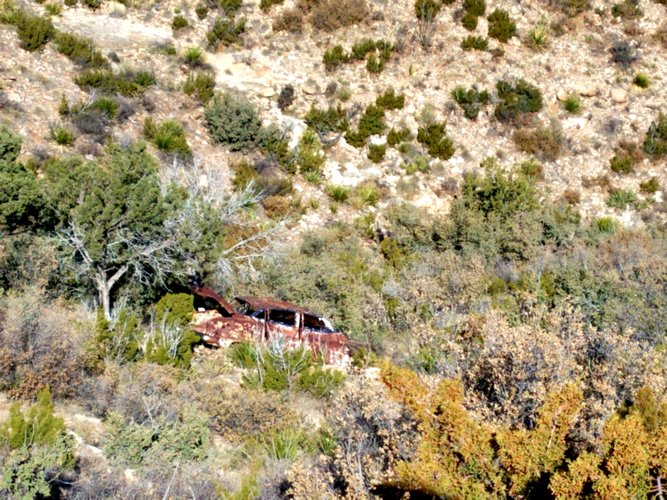 And you can't go down south and not hit up Whataburger 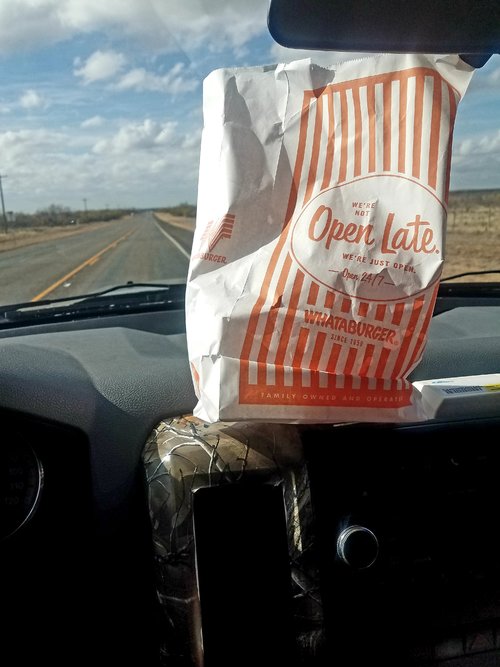 Proof that Randy isn't the only one who can scratch the crap out of their truck, but beat up Betty got her name for a reason lol. @Big Fin 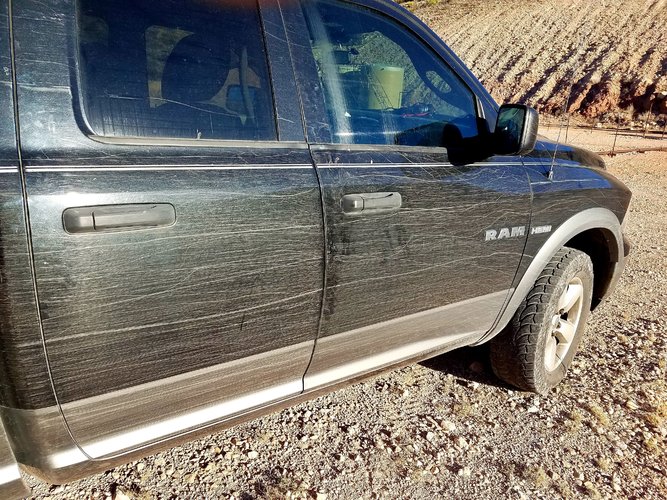 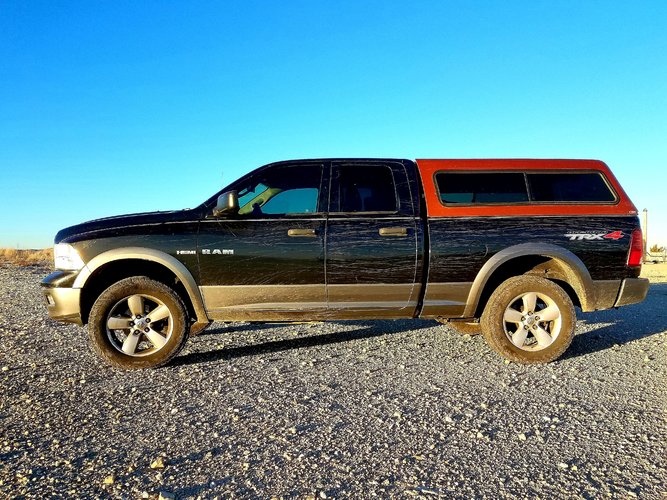 Congrats on the great trip
B

Good for the hunter. New Mexico can be prickly. I have had wife take pliers to my ass a couple of times.

bobbydean said:
Good for the hunter. New Mexico can be prickly. I have had wife take pliers to my ass a couple of times.

Luckily all the ones that got us were easy to get out.

Congrats. Job well done.
You must log in or register to reply here.