Hey guys, its been a while since I've posted over here, even though I come by daily to read the daily battles in Sportsmans Issues.

Anyhoo....i figured that while I was here I'd share pics of my Limited Entry Bull I shot here in Utah back on the 23rd of September.

This was definitely the hunt of a lifetime. I got up to the area I was going to hunt 2 days early to do some scouting, but since the archery hunt was still going on, I didn't see much (too many people riding around on their ATV's), and didnt hear much either. It was so warm the bulls were quiet.

Opening day I spotted a bull about mile out and headed his way. He was working down one side of a canyon and I was working down the other...needless to say he beat me to the bottom and dispappeared.

On Sunday the weather cooled off and the bulls got real vocal. I spotted a 370 class bull about 3/4 mile away and tried to put a stalk on him. Unfortunately I ran out of light and never saw him again.

MOnday brought snow and the bulls weren't moving and weren't bugling. I had to head back to SLC for a family emergency, so I only got to hunt the morning on Monday.

I returned early Wed. morning and the bulls were going crazy. I counted at least 8 or 9 different bulls bugling in our canyon. I would cow call and could hear them getting closer, but they would never show themselves. THat afternoon i headed into the timber to look for them, but they quieted down and I had trouble locating them. It was starting to get dark so I headed back to the truck. As I was walking along, I spotted to spikes on top of a ridge about 300-350 yrds. away. I said to myself, "Now why cant that be a mature bull." Just then I heard the weirdest bugle coming from the ridge where the spikes were. Just then 12 cows came feeding over the ridge with a bull behind him. I couldnt get a good look at him cause he was standing in some trees, so I had to wait until he fed off into a clearing about 75 yards from where I first spotted him.

Once he entered the clearing I knew he was a bull I'd be happy with. I threw my pack on a rock and steadied myself for the 400-425 yard shot. My first shot hit im threw both lungs, but he didnt drop. He instead turned and ran downhill towards me. I put two more into him and he tumbled down the hill almost another 100 yards. I thought he was going to break his horns, but luckily they all were in tact when I got to him.

BY the time I hiked up to him it was dark, so I had to clean him by flashligh light and leave him on the mountain for the night. THe next morning my father-in-law and I returned and dragged him the rest of the way off the hill, and down to a flat area where we quartered him, caped him, etc. and packed him out. 7 hours later he was packed in the truck and I was on my way home.

Although he wasnt the biggest bull on the mountain, he's a trophy in my book. He has weak thirds, but some AWESOME mass, allowing him to gross in the mid 330's. Needless to say I am HAPPY!! Just cant wait to draw this tag again!! 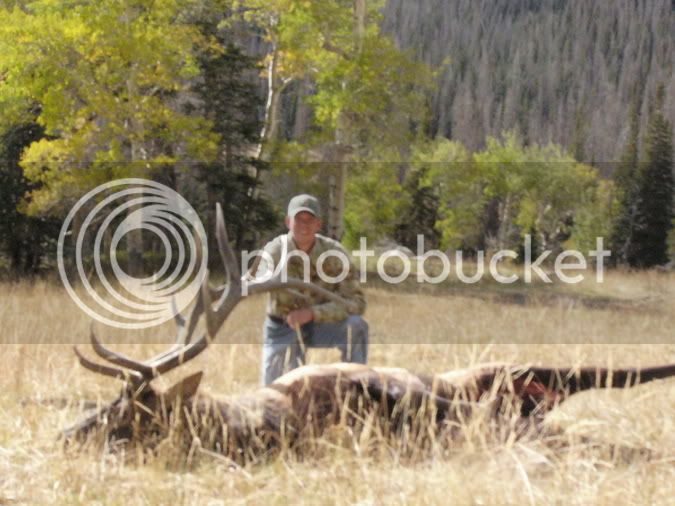 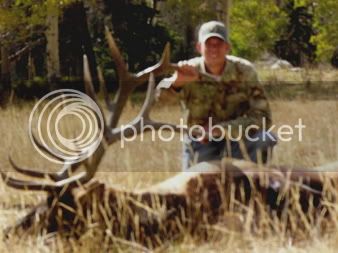 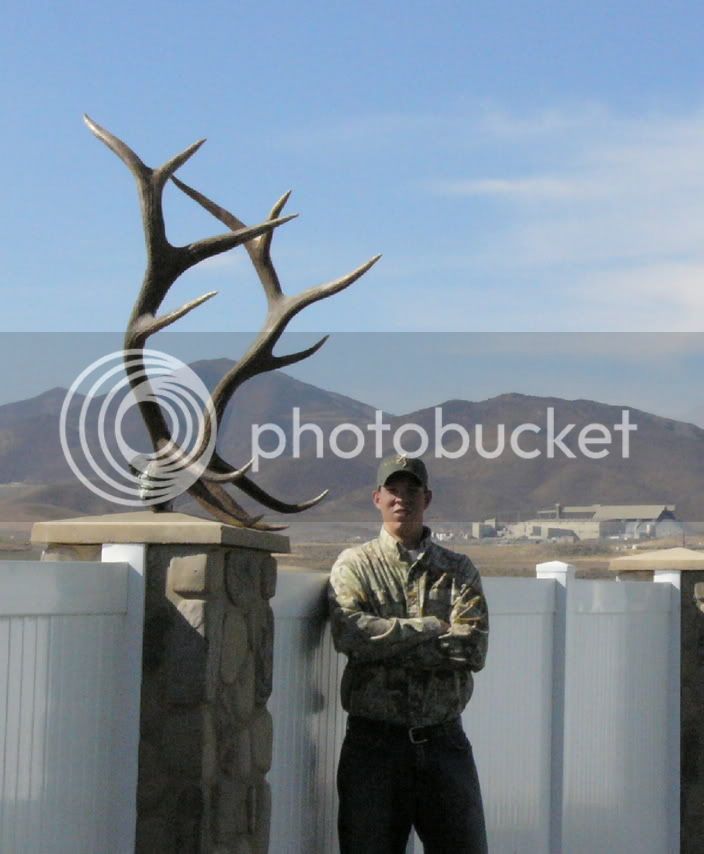 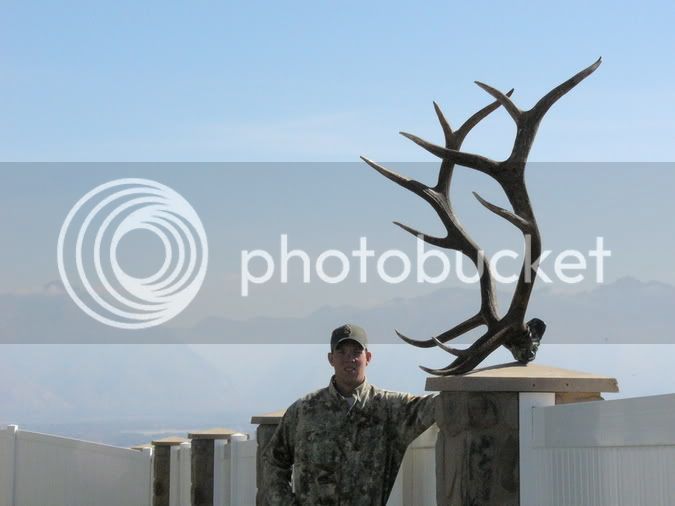 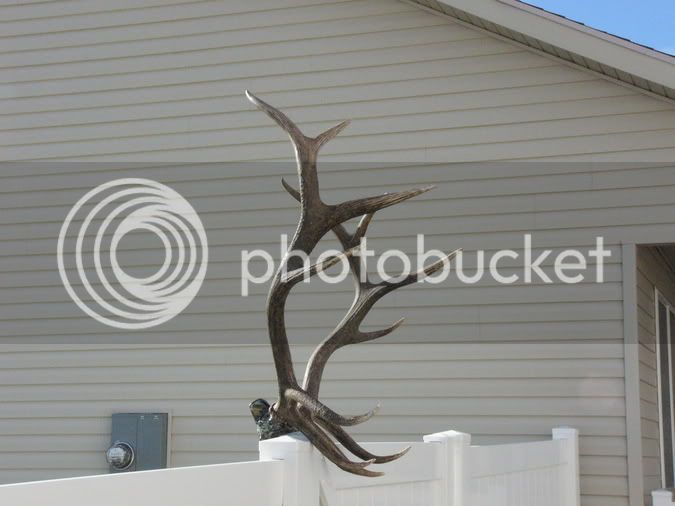 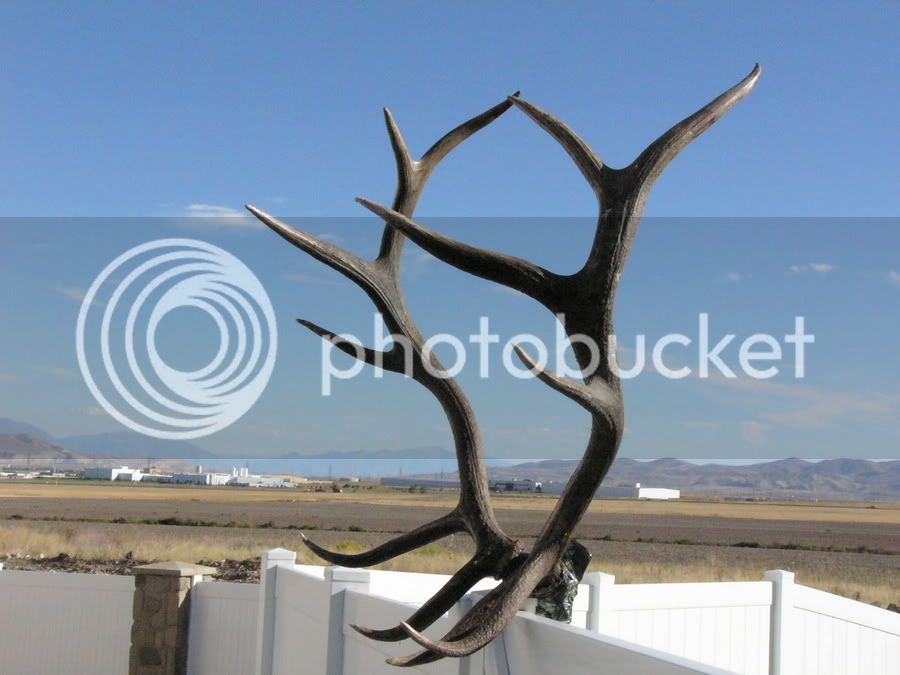 Nice bull thanks for the story and pics.

Location
On the ridge

Great story and pics. That's one for the wall for sure. Good job

Very nice bull, congradulations. His antlers sure will look nice on the wall, and he'll taste good this winter.
Quick Draw

Welcome back and congrats on the bull !!

still a greta bull in my book,Congrats!
R

Mucho congrats! That's one heck of a bull. What unit did you draw??
T

Thanks all for your comments. Im really proud of this bull.....not too shabby for a self-guided hunt in a last minute canyon that I had never stepped foot in.

To answer the questions posed. This bull was shot in the Central MOuntains Manti LE Unit. I was shooting my 30.06 with 150 grain Scirocco's.

TUFF
You must log in or register to reply here.

Tuesday at 11:00 AM
StrongmanHuntsBigGame
S
J
Thoughts on no blood trail?
3 4 5