I watched the doe and 2x3 feed in a small patch of willows and bed down in the trees. I then set up to glass there for the next few hours, occasionally walking a few hundred yards in each direction to change up the angle. I knew the deer would probably feed and rebed at least twice that day, and I was hopeful, but very uncertain, if the big buck would reappear.

I stayed there for 3 hours, glassed up a forky and doe and fawn further up this new basin, watched the doe and 2x3 feed and rebed as predicted, but no sign of the 4x4. Eventually by around 1 pm, I had started to doubt the big buck was still there, and figured I might as well do some exploring before the afternoon/evening feed session.

I walked the ridgeline about 2 miles to the head of the original basin to see if there were any other deer I could glass. 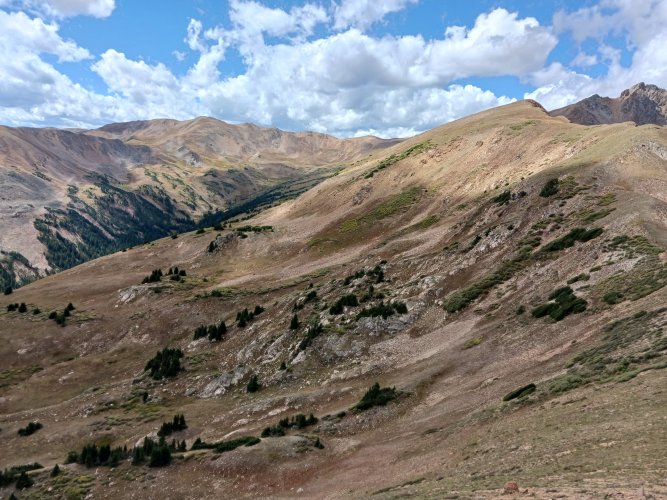 Once I arrived to the point that I could see the whole head of the basin, the first thing I glassed was a lone hunter, walking straight up the middle of it. He was clearly struggling with the grade and/or altitude, and happened to be standing exactly where the herd of elk and deer had been 7 hours before at first light. His scent would also have been carrying down the middle of the entire basin.
Considering the basin blown out, I headed back to where I had left the 2 (hopefully 3?) deer before. This whole trek was an extra 4 miles back and forth at 12k+ feet that my legs probably did not need, and by the time I got back to my original spot, I was feeling it.

Within 30 minutes of being back at my spot above the doe and 2x3, I noticed the doe up and feeding. And then, from the same timber the two had bedded in before, he emerged. 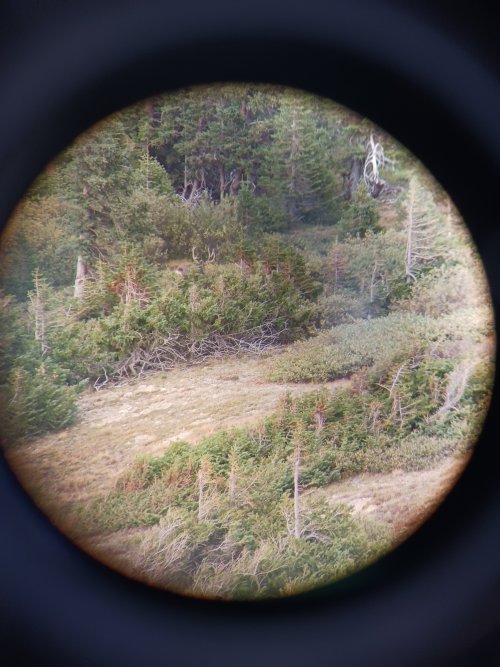 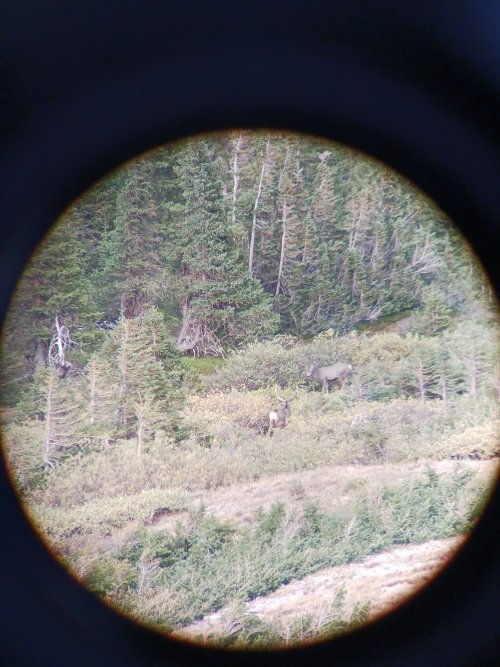 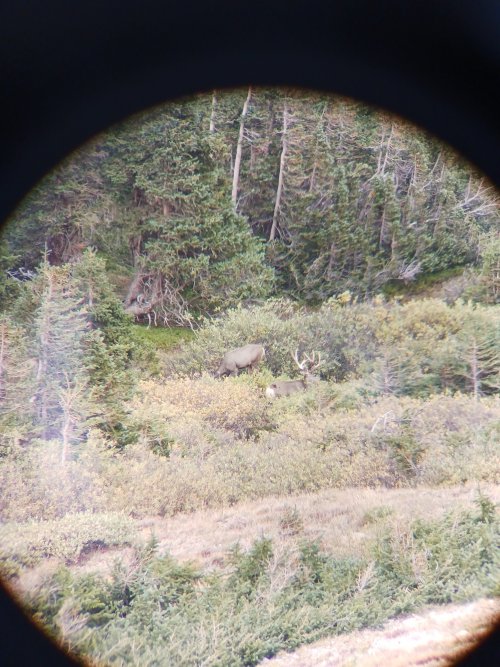 From what I have read and gathered, typically the move is to stalk alpine mule deer when they are bedded. However, given the thick cover these deer were bedded in, and the consistency of the current wind, I decided to stalk him now while he was feeding, exposed, and neck deep in willows.

The deer are marked with the arrow: 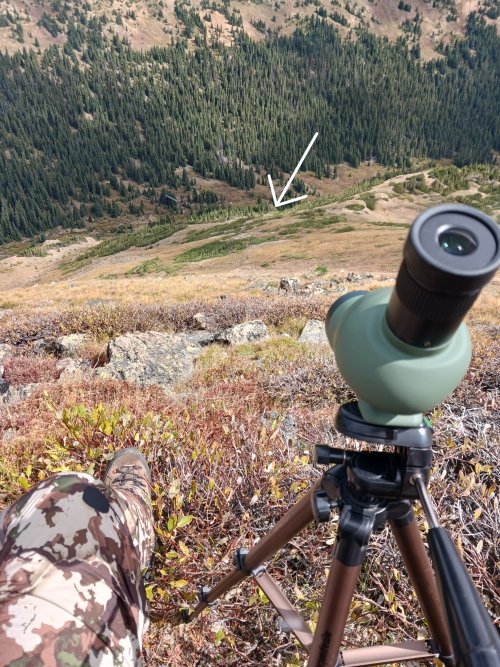 Taking only my gun, I descended 500 feet of elevation quickly and quietly, keeping the buck out of my view using the terrain and vegetation. Between the buck and I, there was a subtle rise with willows on it, providing the only cover between us. I made it to their edge, and ranged the buck at 126 yards. He remained blissfully feeding in the willows with the doe.

The steepness of the slope, my exposure beyond the willows, and their height proved immediate challenges that I was clearly unprepared for in terms of pulling off a shot. I found myself needing to shave off 20+ yards to take a shot I was comfortable with, and really no way to do that without moving through the willows. They extended to both sides of me for at least 20 yards, and the wind and rocks made it impossible for me to go around them. I could stand up, but I was not comfortable taking an 100 yd offhand shot, and I would be spotted immediately.

I made the decision to move into the willows. Total...dumbass...move. Luckily, the buck was feeding towards me, but that wouldn't last more than a few more yards as he would run out of his own willows to feed on. I made it about 5 yards into the willows, when the buck whipped his head up towards me. He couldn't see or smell me, but I believe he could hear the willows against my clothing. While he shortly went back to feeding, I was stuck on a steep slope with gravel beneath my boots, in a sort of slav squat position, unable to move without drawing the bucks attention.

Like this, but in blaze orange, holding a muzzleloader, and buried in willows: 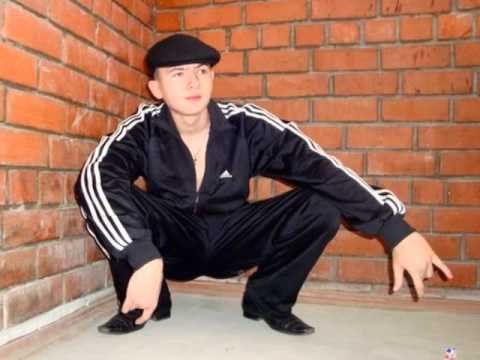 This dance continued for 10 minutes. I would shift a couple inches at a time, the buck would look in my direction, but always go back to feeding after a minute or so. I was still stuck, but the distance was now 106 yards. The problem was still twofold. I couldn't rise above the willows without being spotted, and I couldn't shoot from where I was because of the willows obscuring me.

Eventually, I had scooted my butt uphill in such a way that I could potentially shoot between branches, but was essentially freehand shooting steeply downhill, at a distance just beyond which I was actually comfortable (I have practiced extensively at 100 yards, but not beyond). The buck was in my sights several times, but between my position, the straining to rise above the willows, the stiff breeze in my face, and the distance, I was simply never comfortable. As I was straining to get comfortable, with the buck again in my sights, and coming very close to gaining the confidence to take a shot, the buck spun his head up towards me a final time.

I really don't know if it was the slightest movement, sound, or the sun reflecting off me or the gun, but this time was different, and he bounded diagonally to my right downhill, the doe and 2x3 in tow.

In the direction they went, I knew there was a very steep scree slope in their way. I got up and ran around it above them, in the hopes I could cut them off above their escape route. I got there in about 60 seconds, and sat quickly at the base of a small tree. A few seconds later, I heard movement through the rocks. The doe appeared, walking, 75 yards below me. Then, the 2x3. I had him in my sights, all the while praying that the 4x4 would follow. He did not.

View from the cutoff where the doe and 2x3 passed below me: 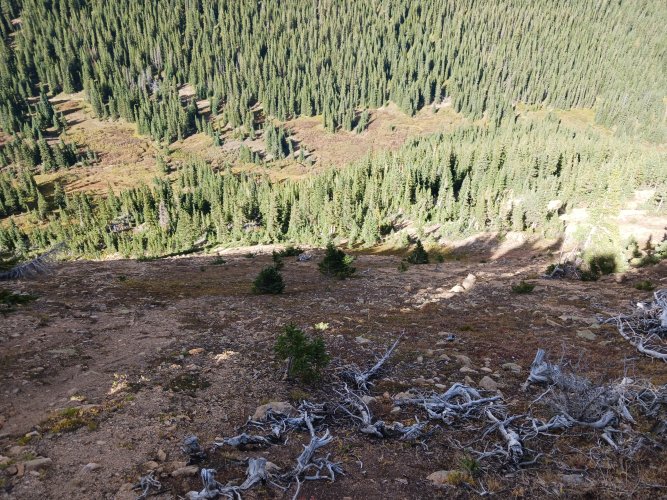 The deer deep into the timber, all that was left was the exhausted slog 600 feet of elevation back to my pack.

Once arriving, I lay on the slope at 12,400 feet simultaneously basking in disappointment, self-loathing for my mistakes, and the satisfaction of having had the opportunity at a stalk on a mature alpine buck. 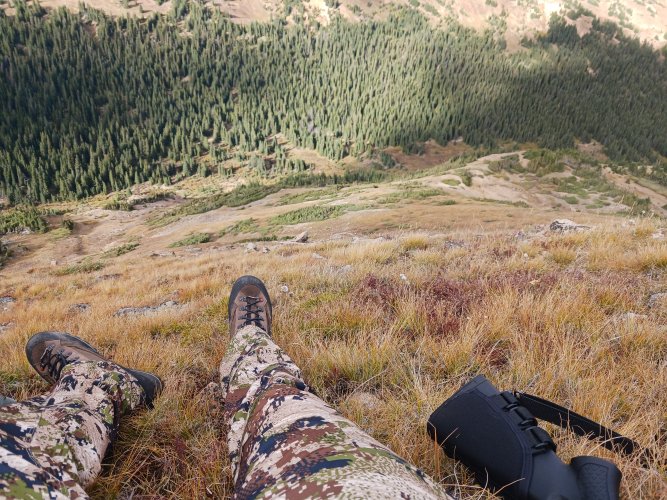 On the long walk back to the truck, I had plenty of time to reflect on my mistakes and takeaways from the day.

1) Do not, under any circumstances, shove yourself inside thickets of willows while on a stalk. It completely paralyzed me, making it impossible to reposition myself without making noise apparently perceptible at 100 yards. Such, such a dumb mistake.

2) If I had brought my hiking poles, or my tripod and rifle yolk, there is a very good chance I could have pulled off a shot. I am simply not comfortable shooting offhand at 100 yards without at least very steady footing, which was not a possibility both due to my body position and the steep slope. But I needed something to get my gun above the willows, and I didn't have it. Another dumb mistake.

3) Persistence pays off. I think it would have been very easy to give up on that buck when it crossed the ridgeline at 7:30 am. But, I followed it, and stuck with his friends even when he did not appear for about 8 hours. This was a great lesson for myself for future hunts, as there were many times that I feared the buck had left his friends never to be seen again during those 8 hours. I really did not deserve a 2nd chance at that buck after being busted in the morning, but I got one.

4) The difference in instincts and senses between the 4x4 and his younger companions was insane. Each time he looked towards me in the willows, and also in the morning when they were skylined above me, his 2 companions were calm and comfortably feeding. He was so, so much more aware to danger than they were. There is a reason he has reached the age he has, and why there are so few like him on public land.

5) Alpine mule deer hunting deserves more than a backseat to an elk hunt. I got concurrent tags this year due to family circumstances, but this is not something I hope to make a habit of. Finding mature bucks in the alpine is a usually very time consuming challenge, and I got unbelievably lucky to have found one in one day by picking a basin that "looked good" on a map. I enjoy alpine mule deer hunting too much not to dedicate a full season to it in the future.
Last edited: Sep 19, 2022

trb said:
The deer deep into the timber, all that was left was the exhausted slog 600 feet of elevation back to my pack.

Once arriving, I lay on the slope at 12,400 feet simultaneously basking in disappointment, self-loathing for my mistakes, and the satisfaction of having had the opportunity at a stalk on a mature alpine buck.

Thus ends muzzleloader season 2022. Until next year, thanks for following along! 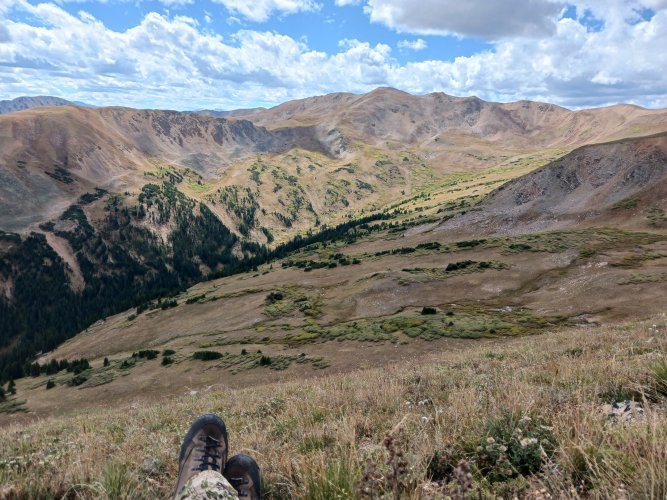 You’re a damn good storyteller, @trb . You capture all of the excitement, challenge, reading of the landscape, and love of these animals and the places they call home that makes hunting like no other experience out there. And you do it with humor and style.

I really wanted you to get that buck, but I like thinking about him still being out there, doing his thing. There’s nothing like a big, old mule deer buck.

rtraverdavis said:
I like thinking about him still being out there, doing his thing. There’s nothing like a big, old mule deer buck.
Click to expand...

You and me both.

Thank you, I appreciate the kind words and being able to use HT as my only outlet for my imaginary fantasy of being an "outdoors" writer. Instead, tomorrow I'll be back at it teaching 10 year olds how to find common denominators.

So awesome - I was totally rooting for you to get a shot at the 4x4!!

Wonderful thread, thanks for taking us all along on your adventure!

What type of muzzleloader were you using?
Scoped or open sights?

Hem said:
What type of muzzleloader were you using?
Scoped or open sights?
Click to expand...

Scoped muzzleloaders are illegal in CO. I use a CVA Wolf (with the open sights law, I see no reason for the longer barreled Accura or Optima, just adds more weight) with a peep sight mounted on the picatinny rail rather than the traditional mid-barrel placement.

trb said:
Scoped muzzleloaders are illegal in CO. I use a CVA Wolf (with the open sights law, I see no reason for the longer barreled Accura or Optima, just adds more weight) with a peep sight mounted on the picatinny rail rather than the traditional mid-barrel placement.
Click to expand...

Gotcha.
I've hunted open sights with traditional and modern. Good for you waiting for a shot you were comfortable with, offhand at 100 yds on the side of a mountain is not ideal.

GREAT story! Really enjoyed the read and pics! Amazing country with great glassing opportunities and the decisions of hunters gaining (or trying) ground on big game was shared perfectly! What a nice looking buck!

Very enjoyable read. Thanks for your time putting this together. The true side of Hunt Talk.

Excellent write up and adventure! Thanks for taking us along.
You must log in or register to reply here.