It all started out Thursday, for the youth hunt opener. Its my sons last year to do the youth hunt. Honestly for me the youth hunt has been one of the greatest things that Montana FWP has come up with. It gives an opportunity to the youth/new hunters to hunt Deer that have not been pressured and gives parents and or mentors a opportunity to set the young generation up on deer that are not skittish, it allows them to have the time to make the shot with out the pressure of the orange army.

We have never really been Whitetail hunters, taking the opportunity on a whitetail doe now and then to fill the freezer. I have dreamed of putting a good-looking Whitetail on the wall just because they have eluded me when I have spent the time hunting them.

My son found out Wednesday night he would have to miss the last football game of the season, he has been starting varsity since day one and was really bummed out, thankfully his MRI came out that he will recover fully with no surgery. So, now I have a one-armed youth hunter. We have always stopped at the local gas station the morning of the youth hunt and bought snacks, this year we were joined by my brother and his two boys 3,5 years old. So of course, we must get the suckers that are shaped like a toilet, and pops for later in the day.

Right out of the gate we found a group of Muledeer does, my son had a tag, and I was thinking with 4 packages of burger left from last year we needed to get on the board. Sneaking out was hard for us being he could only really use his one hand to scoot across the 6” high stubble field. We got with in range and I tried to set him up, swing and a miss. He said he was not steady enough and we would need to do something different. After checking all the little spots I like to glass and seeing plenty of deer we had to get him home for his team lunch before the game the next day. I got a flat tire and had to get a couple new ones from the tire shop.

We did not get back out till around 1:30 in the afternoon. I stopped at a crossroad and asked him where he wanted to go, he said his sister’s spot. His sister claimed this spot being that she had shot all of her bucks there. Driving in we topped the hill and I started scanning the hill side. My son said there is a buck thinking I was going to see a mule deer buck, my eyes popped out of my head when I saw 7 whitetail bucks and 10 does bedded in a field full of hay bales. We made a plan and my brother jumped out of the truck with him as I took the little ones down the road a while. They had about a ½ mile sneak from bale to bale. I rolled down the windows of the truck as the little boys were asking me all sorts of questions about hunting when suddenly, we heard a shot. Walking out in the field I could see them over a deer they met us about a hundred yards away and I asked if he shot one of the good bucks he said it was “O.K.” I could see horns from there. This buck in my book was better than ok it was a awesome deer one most Montana hunters would be thrilled with. I asked him if he wanted to get a shoulder mount of it and after thinking a while he asked if it would be ok to get one done. As we were taking pictures of his buck a doe popped out from behind a hay bale. My brother told him to shoot the doe as well, my son replied with I only have one bullet, and I replied that’s all you need. One more shot and the freezer is starting to fill up on day one of the youth hunt. It was such a cool day sharing it with the little boys my brother and most of all my son. The little boys had some many questions about what is, this how does this, work why did we do it that way. One of the boys walked in front of the gun while taking pictures, I told him that's one of the biggest rules to hunting is not walking in front of the gun...well when we got back to the truck with the deer my brother drug the deer in front of the gun, well I was told how I broke the most important rule of hunting. 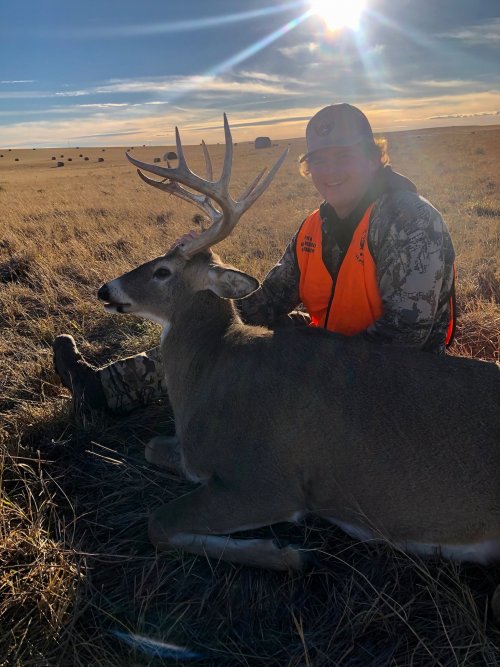 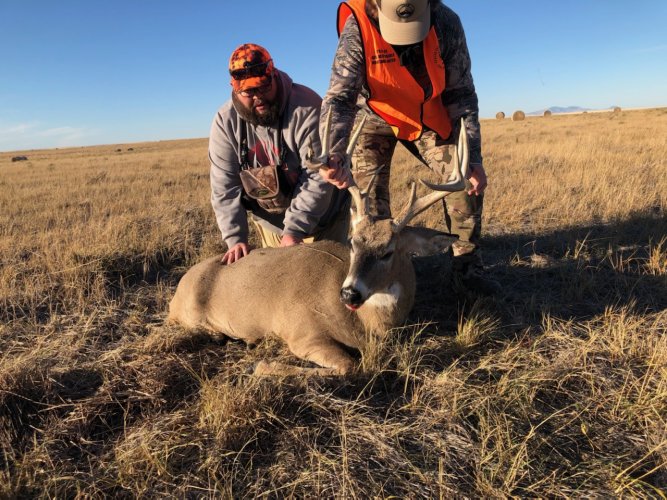 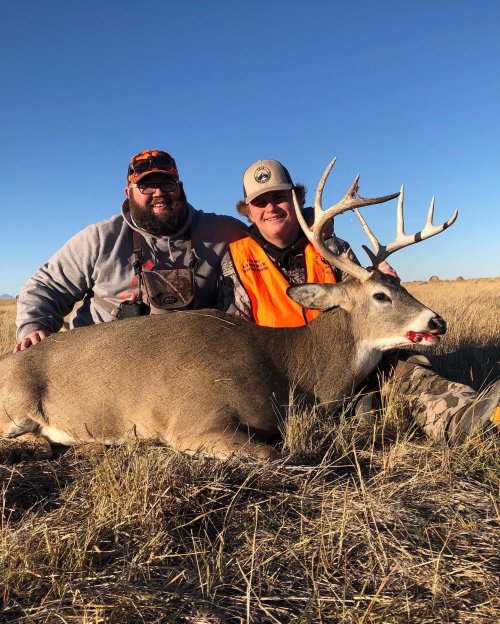 Next up was my daughter, She was only able to go out with us on Sunday, but she does not hunt like most of the people I go hunting with, she wants her snacks, and to nap in the car or in the field. She wants to drive around and look at stuff. She usually will shoot any deer she sees just to put meat in the freezer she loves deer steaks.

Saturday was opening day and what a crazy place to be, we saw over 300 deer and 30-40 bucks that is counting all the deer public and private, what a show though everywhere we stopped we saw deer it was such an awesome day.

The next morning was my daughters day to hunt, she also wanted to stop at the gas station to get snacks because that is what she likes to do snack, sleep and shoot deer, this story gets a little crazy at noon we were sitting on top of a big over look and she asked if we could go home to get something to eat. I decided to check out the same spot her brought shot a deer on a couple days prior.

We were not seeing the deer we did the prior day, but I saw a group running across a stubble field about a mile away, glassing them up I could see that there were two bucks, my brother asked what we should do, and I replied that I can see horns from her in my binos we need to look at these deer and try and make a play. Things just worked out we were able to make it to about 400 yards from the deer and saw some other hunters coming over the hill the whitetails started pushing their way back down behind a little bump in the field. I thought perfect we will make 200 yards on them and wait for them to walk out. Well, we took 2 more steps and were confronted by a group of mule deer 30 strong at 50 yards never did see them but I am willing to bet those were the deer the other group was going after. We blew them out and started running towards where the whitetails were.

Sneaking up on the hill the whitetails had bumped out a little and were at 300 yards now. I was able to set my daughter up on the tripod and look at the deer, My brother was with us again, seems to be the lucky charm this season. I told her that there were two bucks in the group the bottom one is much bigger but if the top one gives you a shot you can take it. No more than I said those words the top buck turned broad side and a shot was fired. The deer hunched up and took off. He didn’t go down and bedded on a hill 1000 yards away. We sat there for over a hour waiting for the deer to die, but he never did. The deer all started to work back towards us and passed by at 50 yards not looking at us, we had great wind. I could see that this deer was hurt but not knowing where it was hurt, finally only the two bucks were left on the hill and the big buck took off the other direction, her buck tried to follow but was not able to move very fast, when he went over the hill we made a move, finding her buck bedded over the hill we stalked in to 400 yards I turned the dial on her scope up and she ended it. Now we are 3 hours after she told me she was hungry, I think she forgot about it and was all smiles. I might have to start hunting Whitetails again after this weekend. 3 Deer in the freezer and a taxidermy bill that is going to go through the roof. it was a cool few days of hunting plans just seemed to work, and luck was on our side that's for sure. 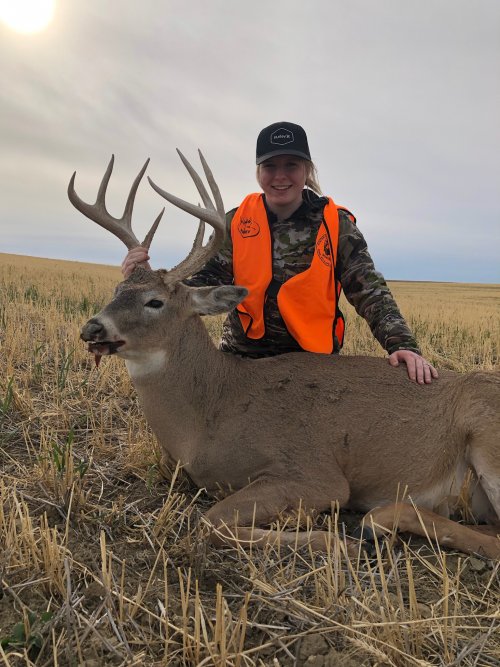 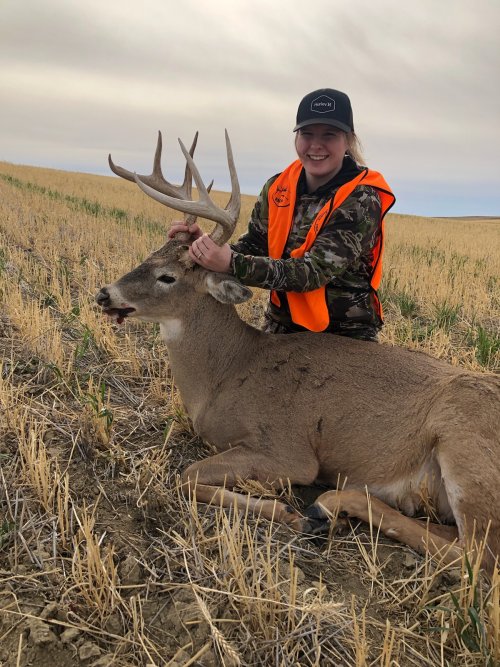 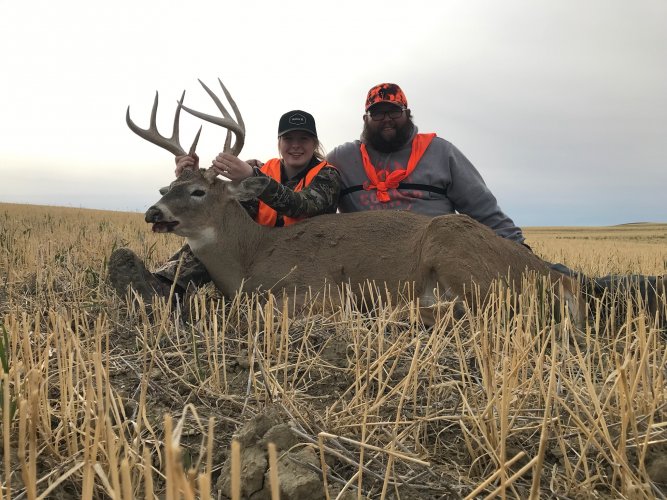 Really nice trophy bucks, congratulations to your kids and yourself. That is great getting them out.

Very nice deer for both kids! Congratulations to the hunters and “guides”

Yep them are dandies. Congrats!

Holy smokes! Congrats to both of them! Great bucks!

Those are some awesome bucks! Congrats to everyone involved. Can’t wait to head to Montana this year!

Mighty fine. I’m a big fan of the youth hunts, as well.
P

Way to go dad! Congratulations to both your kids. Making memories you’ll cherish down the road.

Both great bucks and awesome memories. Thanks for sharing with us.

Congrats - thanks for sharing. Anybody else wondering how big the bottom buck was?

Great looking whitetail bucks! Congrats you you all.

NEWHunter said:
Congrats - thanks for sharing. Anybody else wondering how big the bottom buck was?
Click to expand...

All I have to say is I have not seen many deer this big, this fat for a long time. That buck had over a inch of fat on it back.
F

Congrats, doesn't get much better than that.
W

Awesome deer, congrats to the two young hunters!
B

Congrats - great to see dads and kids out here hunting together!

Great bucks - Dads and kids hunting together is my favorite!

Great looking bucks!
You must log in or register to reply here.