My middle son turned 10 last year and squeezed in a deer and a bear after his birthday in September. He took the online hunter education course solo and when it came to application time, he learned to do his research. He convinced me to put him in for a youth muzzleloader pronghorn tag due to the higher draw odds. I told him if he drew I would have to buy a muzzleloader and we would figure it out. Fast forward to now. He drew and surprisingly I drew an adult tag as well.

The same day I bought our tags I bought a cheap traditions buck stalker, powder,caps,and some power belts. It’s been a huge learning curve for us and we spent several days trying to figure out loads. His first shot with 100 grains of 777 gave him a bruise that looked like,it might bleed.

We tuned him to 90 grains of 777 and after trying both ball and patch and Great Plains conicals, we decided to stick with the Powerbelts.

On opening morning of the youth hunt we arrived in the area about midday. We spotted 8 animals in a field and made a stalk. We ran a ditch bank to try to get into range but we got pinned by a doe and a fawn. The herd split and we snuck into 87 yards of 2 does and a fawn and he got 2 shots off but shot slightly left of the lead doe.

The next morning we woke up and put a few stalks on a few herds but kept getting busted with all the eyes. He spotted 8 animals bedded down in a field with their backs to a ditch bank. We drove a road to the ditch bank and snuck through it. We spooked a few mule deer as we cruised the ditch bank and as the deer sprinted off they distracted the pronghorn just enough for us to get to 147 yards of the 8 animals. He called his shot and told me he was aiming for the far left one. Booom!! Wack! Flop. The doe to the far left rolled and never took another step.

I could t believe my eyes. I asked him about the shot and he said he held a little right and just above her shoulder to compensate for the distance and smacked her.

The tag was either sex but he was absolutely floored to shoot his doe.

With plenty of ice in the cooler being that it was only day 2 we decided to do some fishing and site seeing on the way hone.

Good work! That is awesome

Great job! That smile says it all!

Awesome hunt! Congrats to the little guy. He sounds like a natural hunter.

Enjoyed reading this. I think it's cool that you had him research his hunt, I know that probably made it even more rewarding.

RobertD said:
Enjoyed reading this. I think it's cool that you had him research his hunt, I know that probably made it even more rewarding.
Click to expand...

For sure! I have always skipped pronghorn but he was dead set on wanting one. Even though it was a 5 hour drive, it still ended up being a rodeo.

That’s awesome! My nephew had success couple days ago as well on a paid hunt his dad took him on. I know that doesn’t compare really but anything to get the future hunter’s out there I’m all for! 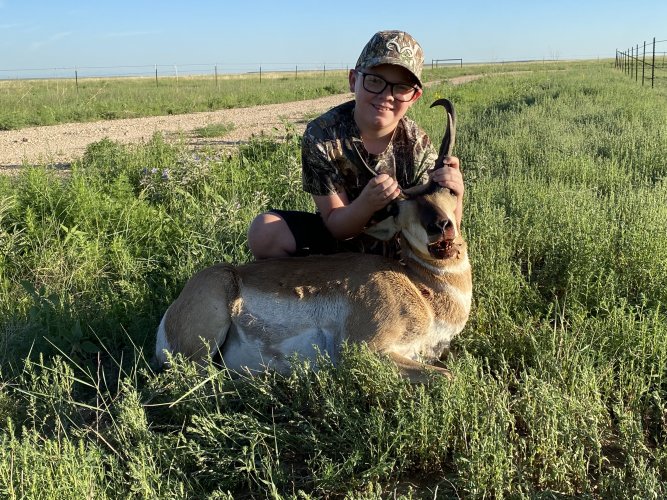 steveshuntn1 said:
That’s awesome! My nephew had success couple days ago as well on a paid hunt his dad took him on. I know that doesn’t compare really but anything to get the future hunter’s out there I’m all for! View attachment 234163
Click to expand...

Those things are so hard to get close to no matter what!!!!

Young man's a natural! 150 yard shot, traditional! That right?
Grats! I'm in the learning curve on a traditional as well and I've had some head-scratchers. Great to see future gens empowered to challenge themselves... and reap the rewards.

Congrats to the young man! Awesome story.
You must log in or register to reply here.