Screwed up the pictures yesterday, hopefully they work this time.

Fairly pic heavy, if you don't feel like reading the long version just scroll through the pics. 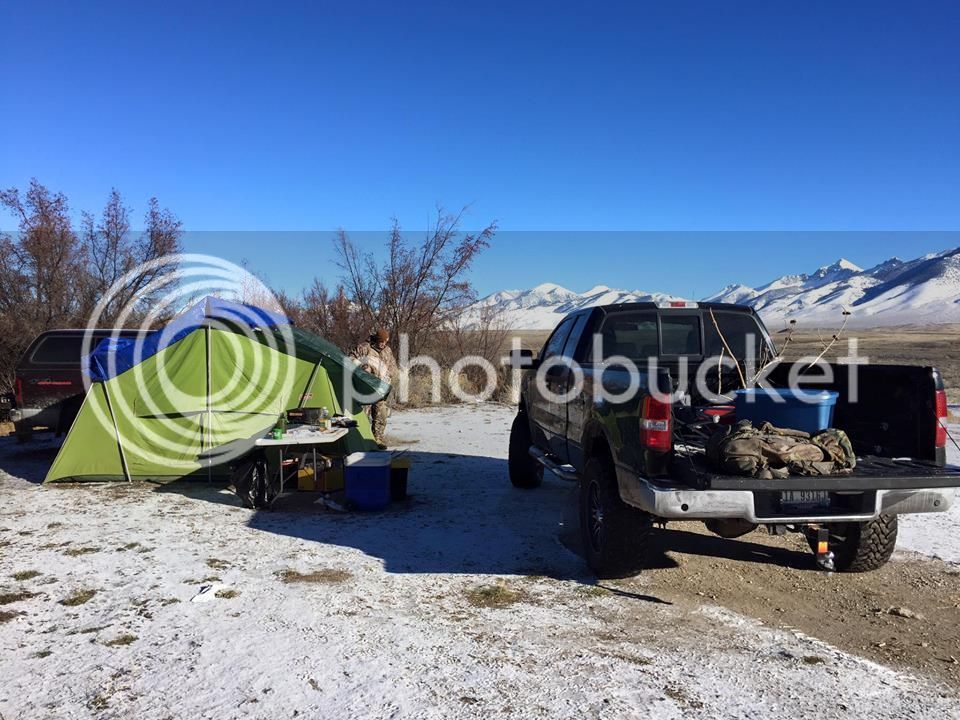 Had an incredible season this year, tagging along with all my buddies and brother on their hunts this year. We don't usually clean house like we did this season, but everyone has a full freezer and a set of horns or 2. This was a cold and snowy hunt made possible by bkondeff, Goldberg (posts on MM's) as well as my 2 best hunting buddies who came despite not having any tags.

We left on a Wednesday after work at 6pm sharp. 2 nice 6 point bulls ran across the road as we were on the highway just as we entered the unit. I would have shot either during daylight!

4 hours later we pulled into the spot that we usually camp. Setting up the tent in the dark in negative wind chill values is always fun, since it seems that is the norm every time we hunt this unit. The buddy heater kept it around 60 degrees inside, despite the highs of 15 and lows around 0.

The goal for this hunt was my first 6x6 point bull. The next morning, we split up, driving to our different glassing points. Me and Michael in my truck, Justin in his. He has a bachelor group of 11 bulls run across the road in front of him, one small 6. Killing them on the road always adds to the B&C score for bulls. Unfortunately, it was too far for him to reach us on the radio, so they take off up the hill.

Me and Michael spot a herd of about 80 cows and 20 bulls running across the sage flats to our left just as it's getting light. We pull over, pull out the spotter and determine the biggest is a young 6x6. Our decision was made when 3 trucks round the corner chasing this herd down, running the poor elk to death. Let's find some elk that aren't spooked. 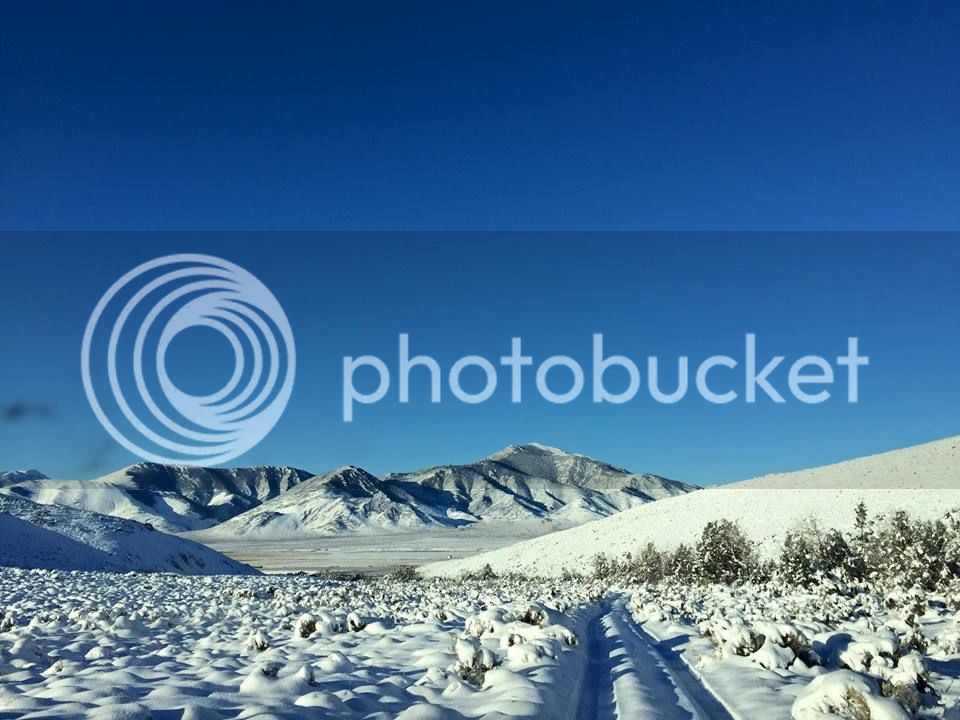 I'm sure this scenery will look familiar to many, but there was elk on every hillside, no secret in this unit. Albeit, it's tough to find a good bull as this unit as a ton of opportunity. We saw 51 bulls over the course of 4 days, the largest being two 6x6’s, topping out around 280-290.

We we're at the base of that mountain on the other side of that valley glassing it when another hunter pulls up and asks if we've seen anything. Just mule deer does, no elk yet. He's a nice guy, but goes and parks about 100 yards away. He gets out, ties his barking dog up to his bumper, grabs his pack and day gear then proceeds to hike right up through the face we were glassing. A 5x5 bull walked out 400 yards above him, unfortunately he never saw it... Luckily no bigger bulls walked out with that one, eventually he spooks. Poor guy did a bunch of hiking and never got a shot.

Frustrated Michael decides to look behind us and glass across the valley, where he spots 3 elk 2 miles away walking into some trees. We hop in the truck, haul ass to get as close as we can for a better look. By the time they entered the trees all we could tell was that they had big frames and walked like mature bulls, but it was the best opportunity yet. They walked into the big patch of timber in the middle of the pic. The plan was set for me to leave the truck at about 1, hike up and get into shooting position by 3 and hope that they would feed out in the same spot come evening. Like they usually do in this unit. 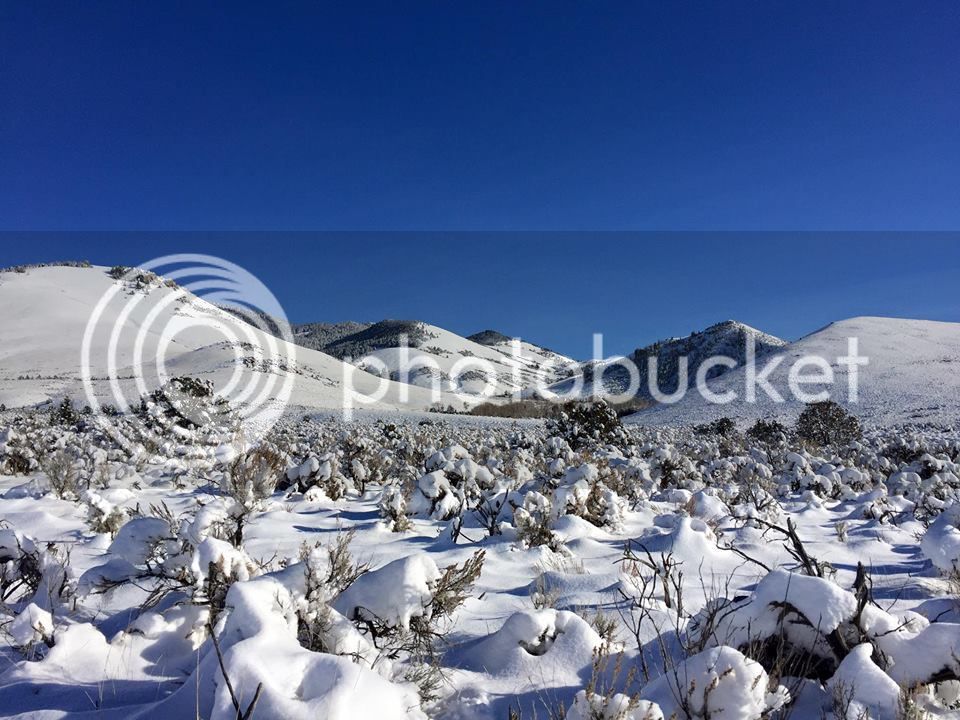 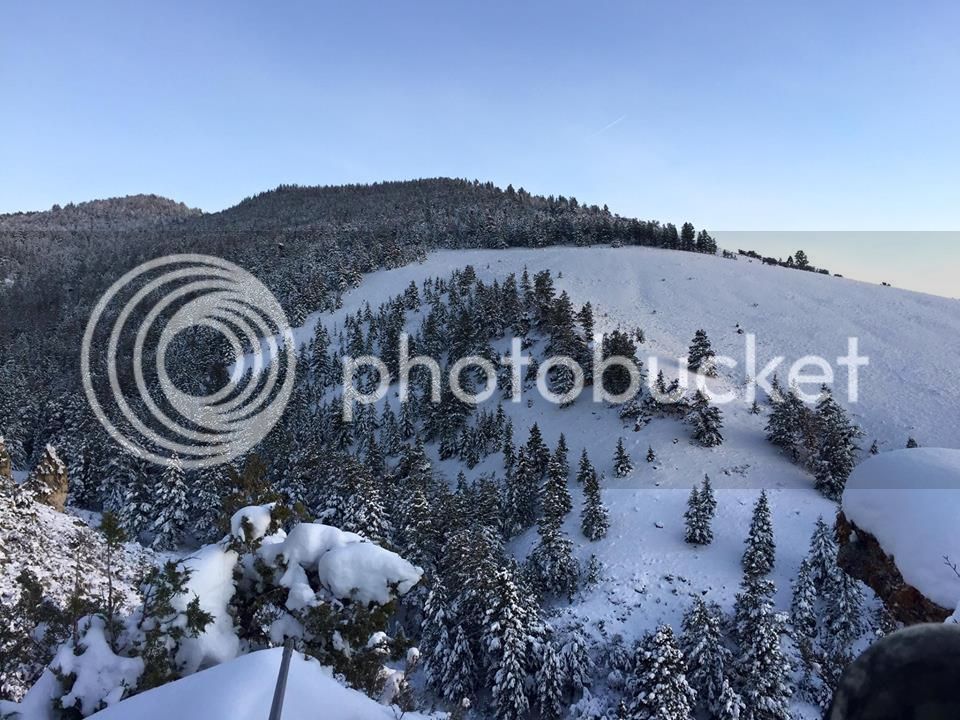 The view from my shooting bench. 485 yards to the top part of the clearing, perfect! The elk had walked into the bottom left finger (280 yards) of this clearing that morning.
I froze my balls off while Michael and Justin enjoyed hot chocolate, pizza and heated seats a mile down below. Gotta keep the sherpas happy and energized! 10 minutes before it got dark, 2 cows fed out into the clearing but no bull.

When I got back to the truck the boys told me that the bull fed out on the right side of my clearing just as it was getting dark. He fit the bill and was a good clean 6x6, but there was no way to see him or get to him from my perch with 10 minutes of daylight left, bummer.

The 6x6 walked out to the right of that triangle of timber above the patch of junipers. 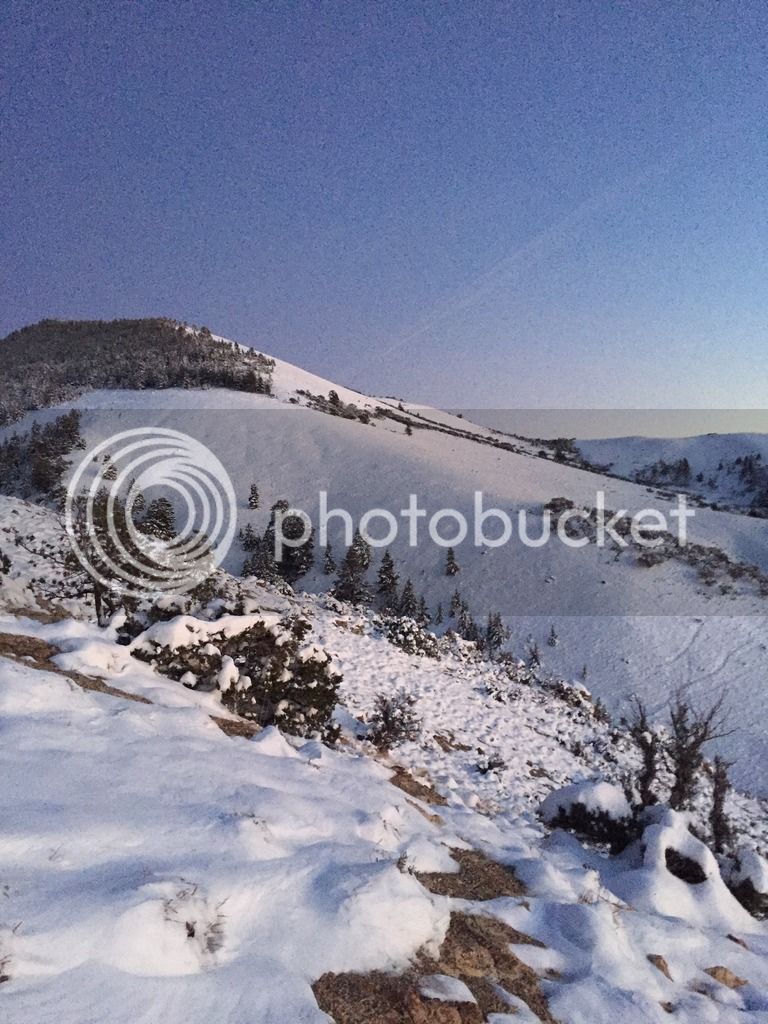 My view coming down. 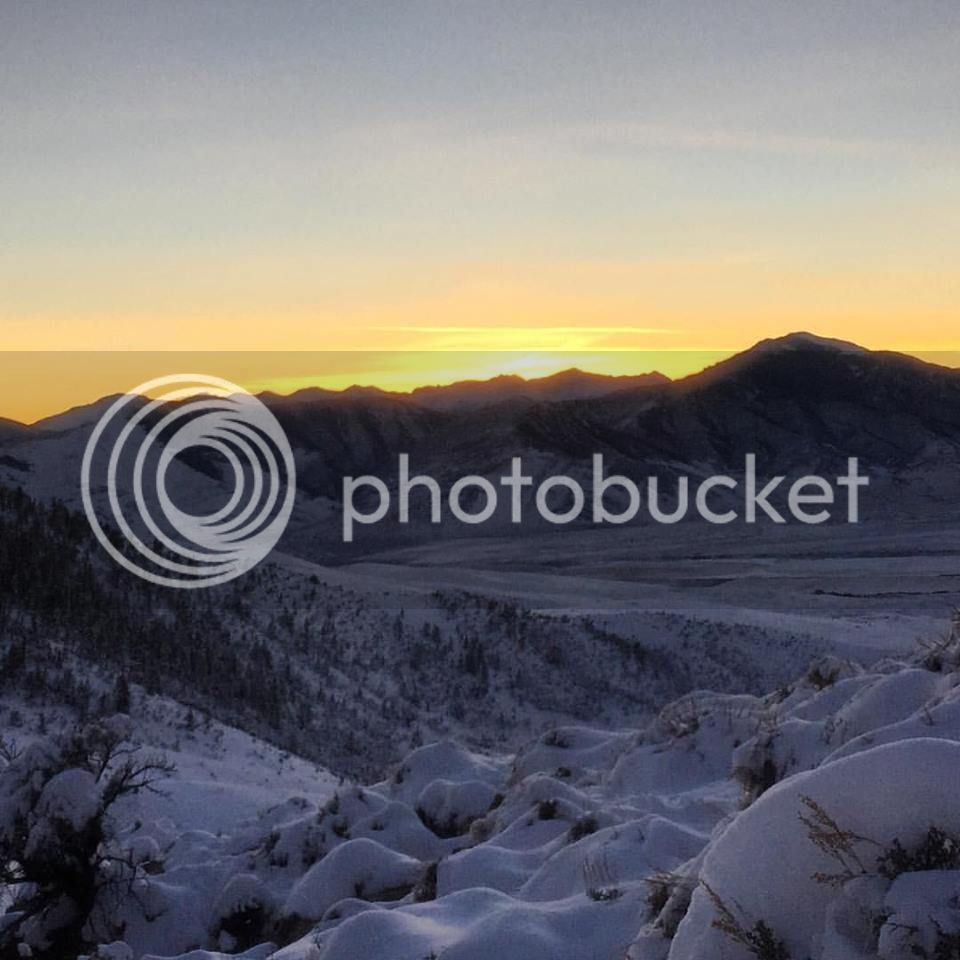 No elk came out of that clearing the next morning either, so we were back to square 1.

Over the next day we spotted many elk and even had 2 more herds cross the road in front of us, as we covered ground in the unit. The bulls were just 5x5's, rag horns and spikes. I think the big bulls were bachelor'd up and higher fighting the snow to avoid the pressure.

There were hunters everywhere, but plenty of elk to be had by all. There were other opportunities to kill bulls that didn't pan out due to other hunters, swirling wind and the lack of shooters. But that's public land hunting.

The last day, Sunday, was our last morning to hunt as Justin had to hit the road back to Texas at noon and me and Michael still had a long drive back to Boise. Killing a bull Sunday night was out of the question since we had work Monday morning. We were seeing lots of elk Sunday morning, but all cows and rag horns. 45 minutes into glassing, Justin says makes a great spot of a big herd of elk moving way way way across the valley. They looked like ants at that distance.

Back part of the herd. 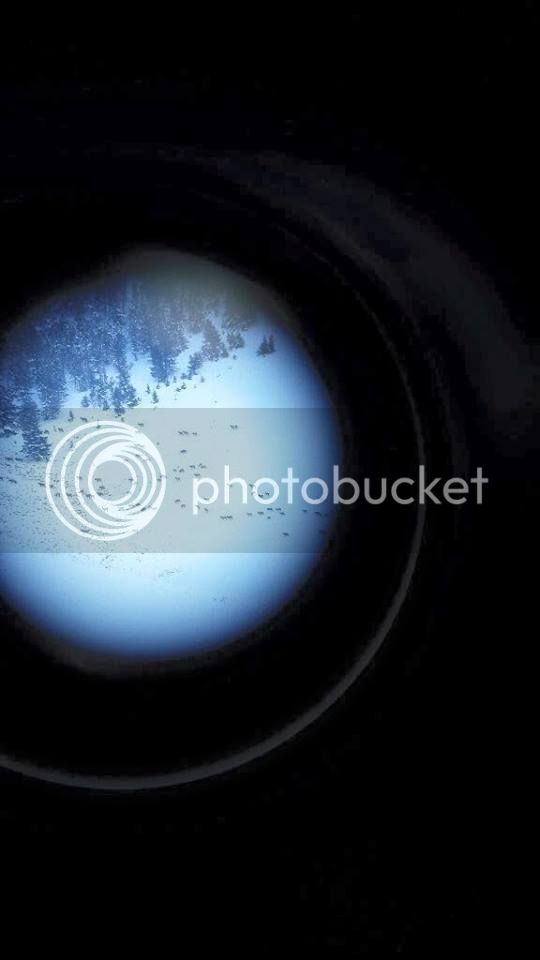 We needed to get closer fast, there had to be a decent bull out of 150 elk. We navigated the roads to shave off 2 miles. Pulled over, pulled out the spotters and confirmed 20-30 were bulls, all 5x5's except for one. One was funky, real funky. He was also limping, struggling at the back of the herd, so we wanted to shoot him.

I slow jogged/walked across the desert to get in front of the herd as they fed up from the flats towards the timber. I had to stop to dry heave a couple times... I just needed to get below the rise so I could make up the ground, run across the bottom of the draw and up the face to the crest, to then shoot across, should only be 200-400 yards at most, perfect.

Besides convincing this doe that I spooked to actually run the direction that I told her to, the stalk was smooth sailing, although long. The bull was actually in plain sight, he was bedded with a few others in the very top right of this pic, along the edge of the furthest timber. 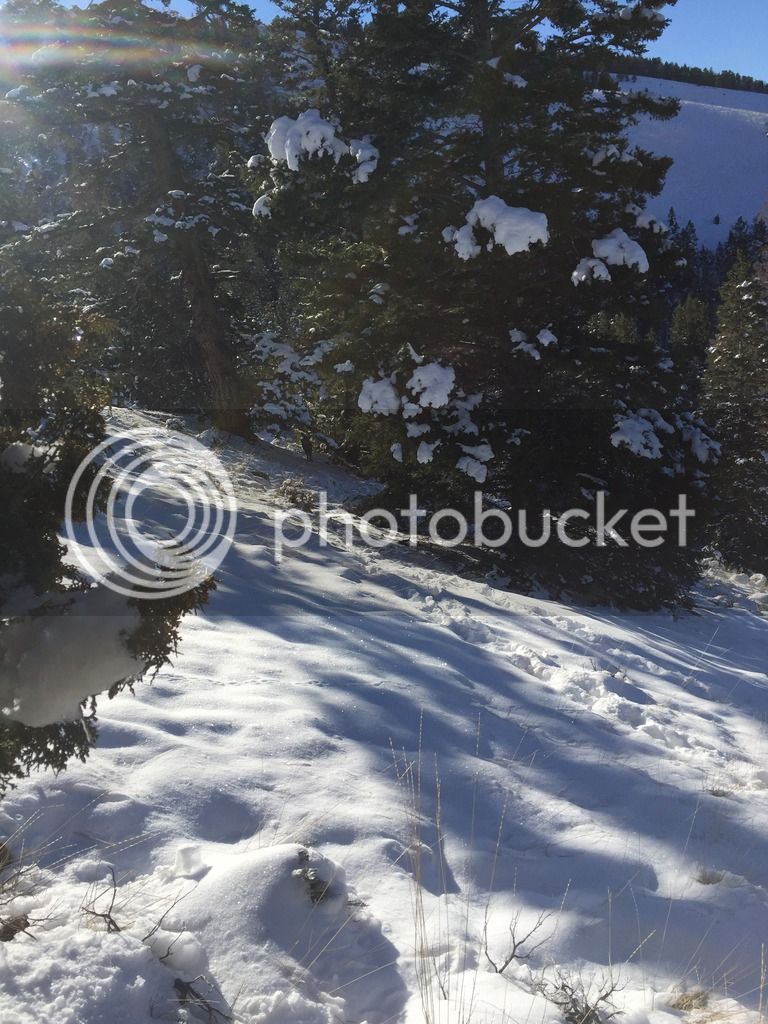 I peeked over, 285 yards with a dead prone rest off of the bipod/pack. I was undetected. I shot once as he was bedded broadside, he got up and sprinted to the left into the trees. I got one more quick one off but it was a clean miss. All of the other elk just stood up. I radio'd Michael and Justin, telling them the shot felt good but that he had ran into the trees. I made my way across and there he was, not far from where he was bedded, tangled upside down in a tree well. I dragged him out and took pictures while the troops were headed up the mountain with packs. 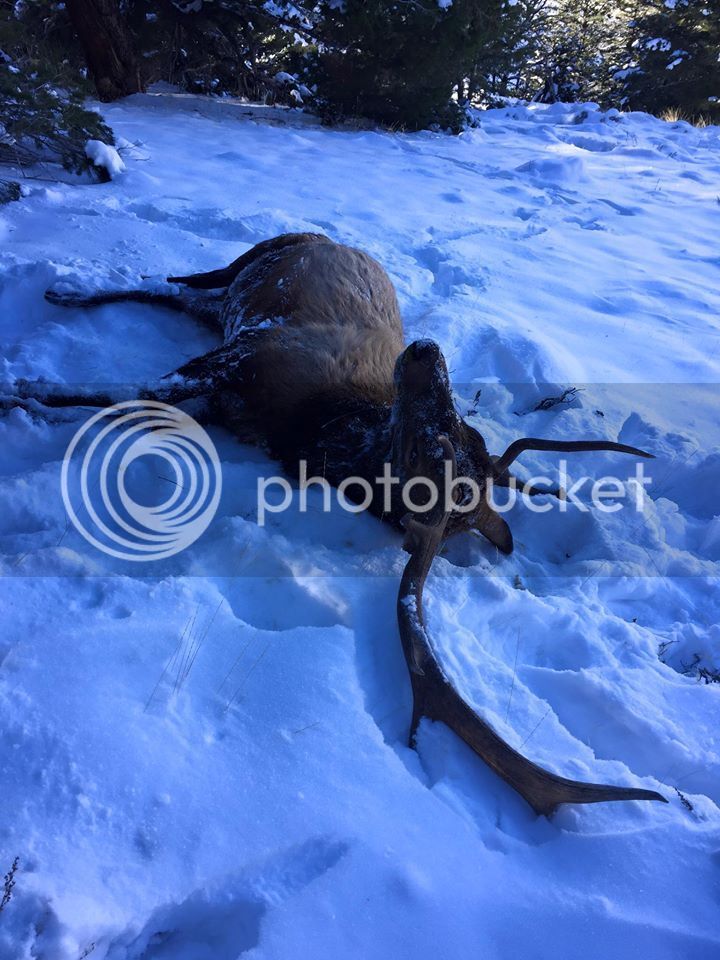 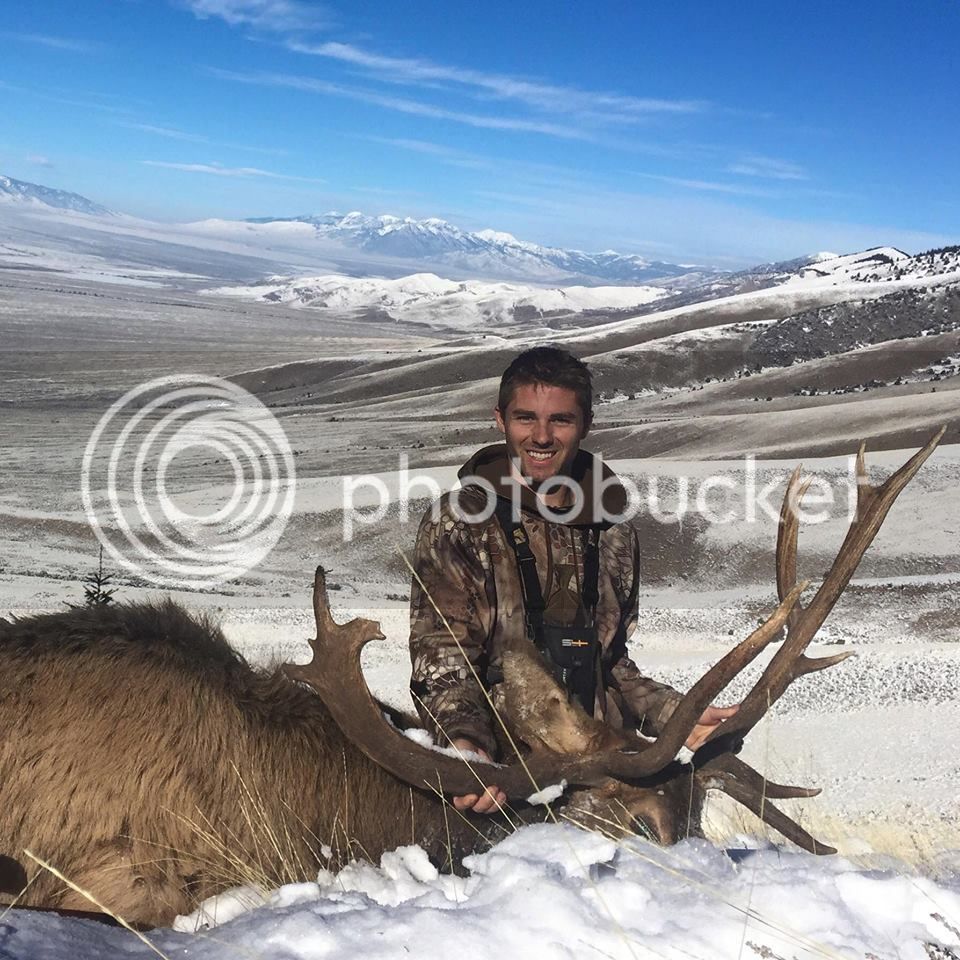 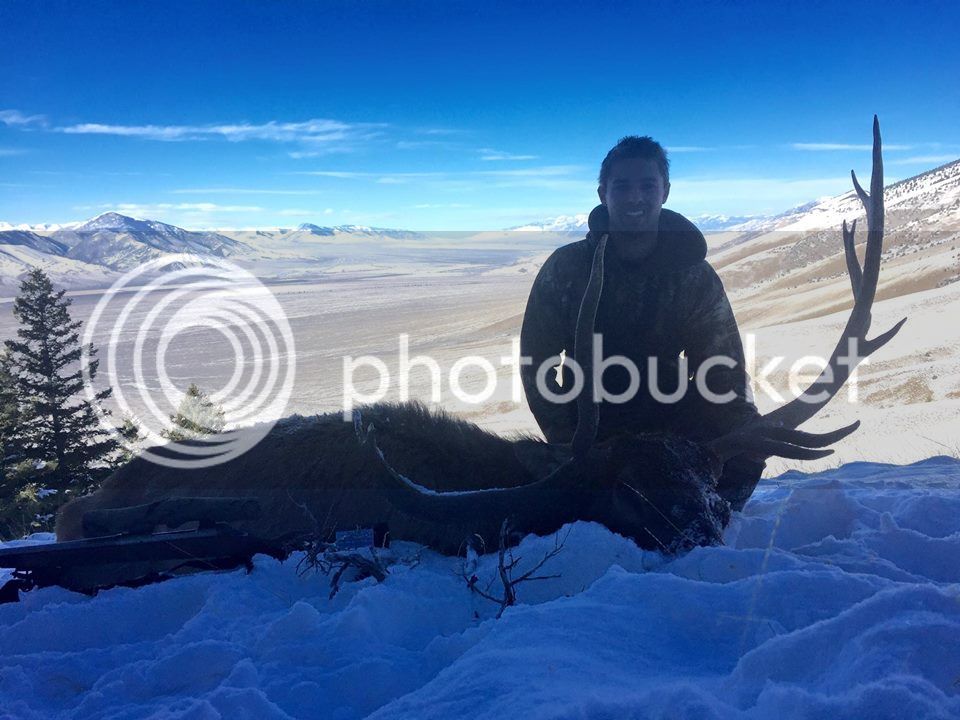 He was shot clean through the hind quarter by someone else, when I went to remove the hinds the back hip joint was already popped on one side, it came off clean just by cutting the tissue away like doing a front quarter. I was glad to put him down.

This was the first accubond I have had that did not perform. It didn't expand at all, although it still killed the bull easily. 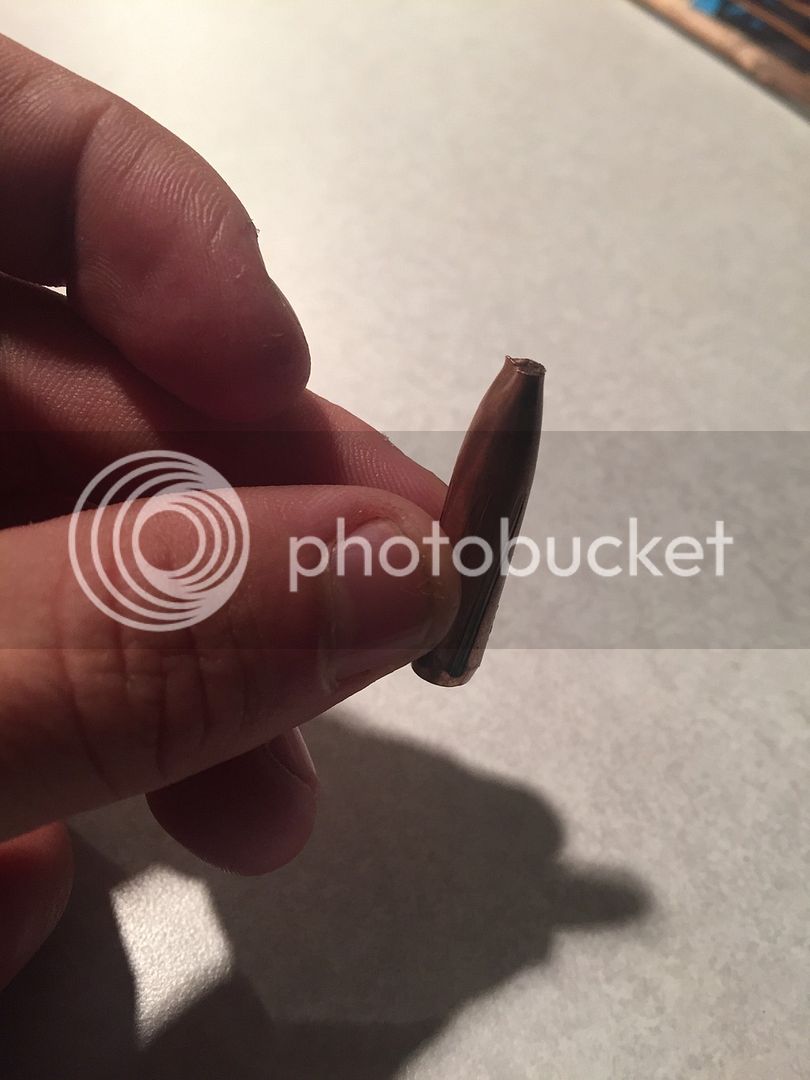 Usually I'm burnt out by this point in the year, but I'm already dreaming about next September. This off season is gonna be a long long wait. Sorry, getting a little bored typing this so here are a couple more crappy iphone pics. 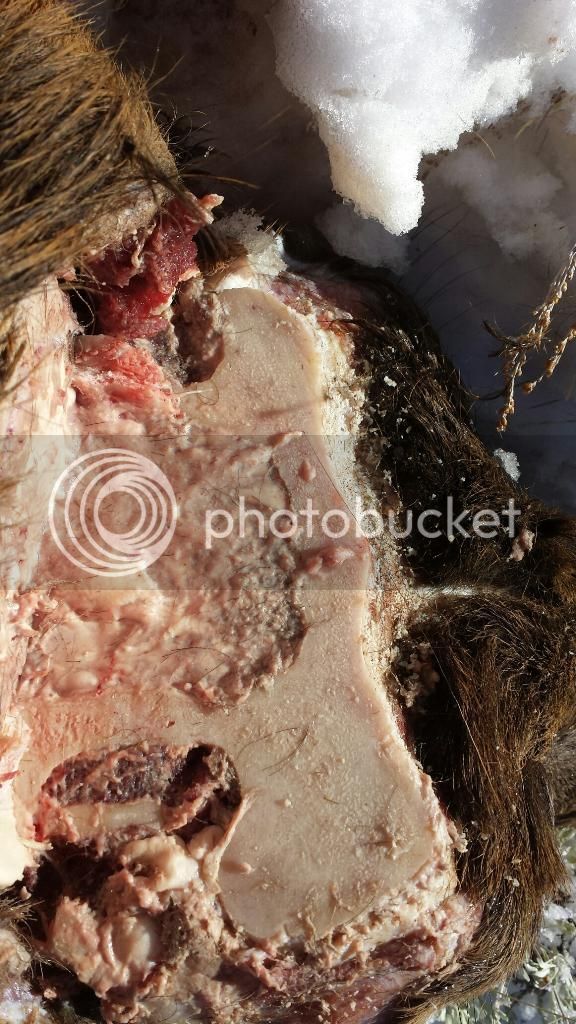 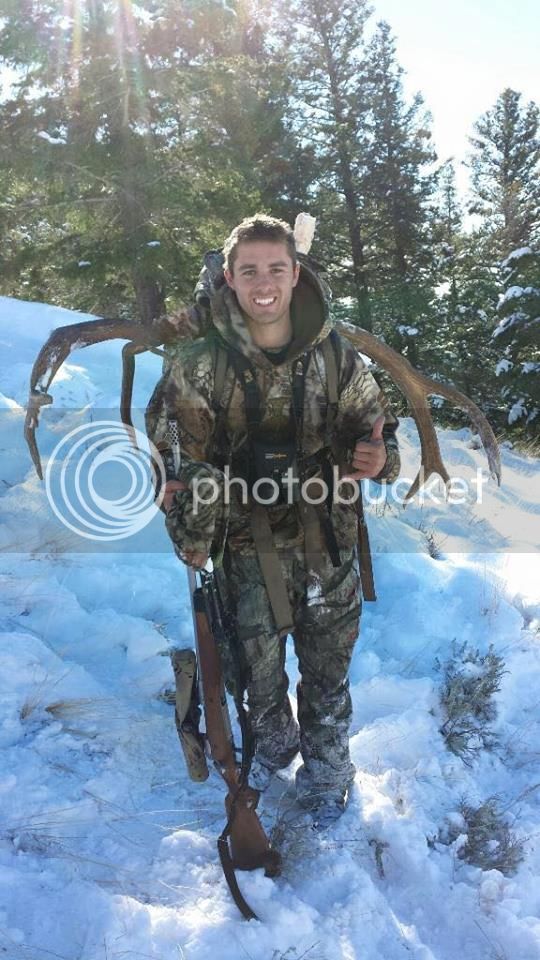 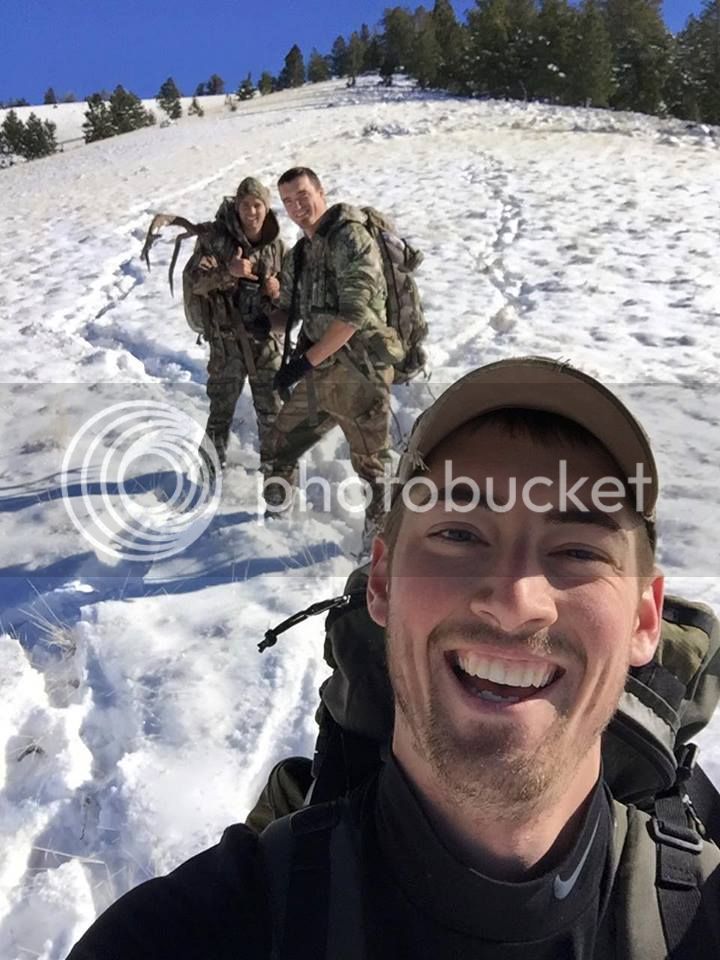 I couldn't have done it without these 2, out spotting me each day of the hunt and making it possible to get a bull back to the truck by noon. Any time you can get an elk out in the same day, it's a good day.

They both had great years. Michael (huntfishfeed on MM's), took a nice archery bull and Justin had a good year as well, taking this nice 5x6 the week before. Both each took bucks earlier during the year, all with OTC tags. Is it September yet? 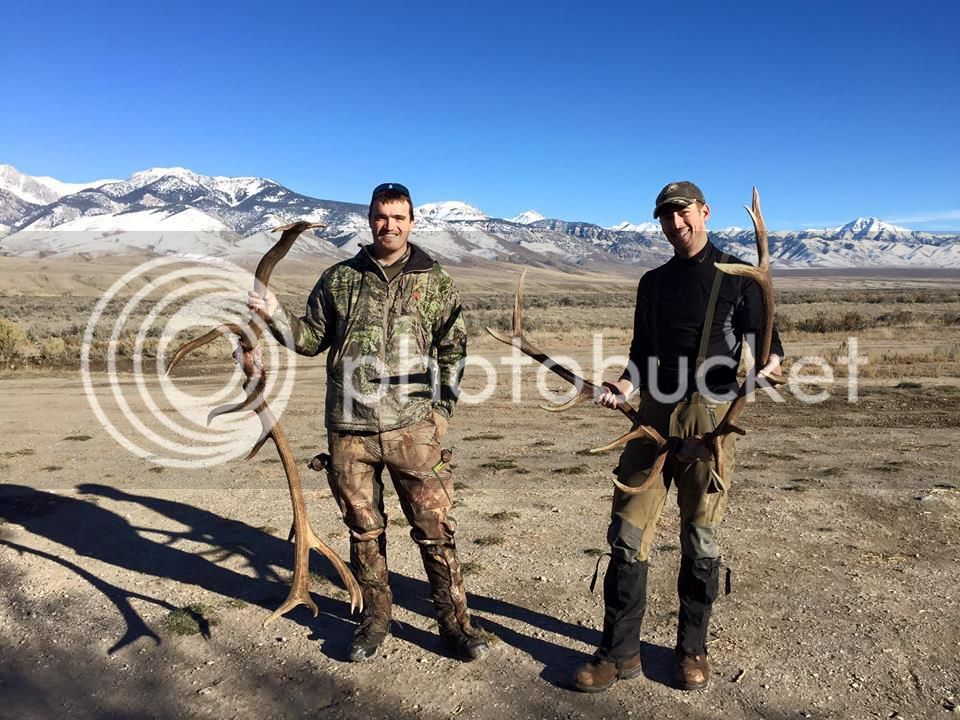 Sounds like you saw a lot of elk, and froze your balls off..great picture and story.

idfishnhunt said:
Sounds like you saw a lot of elk, and froze your balls off..great picture and story.
Click to expand...

I run cold, regardless of how many layers of wool, merino and down that I buy and put on. The ski jacket usually makes an appearance over there.

I'm the same, ever since I worked in Alaska for 5-years fishing I cannot take the cold at all, I hate it...but I deal with it if I need to...like ice fishing, but still hate the cold.

Nicely done! Thanks for the great photos.
M

Awesome pics and story. That is some beautiful country. Thanks for sharing.

That's a cool looking bull, very unique. I'd love to get a bull like that someday, congrats.

fishing4sanity said:
That's a cool looking bull, very unique. I'd love to get a bull like that someday, congrats.
Click to expand...

Thanks fellas, I saw 3 or 4 bulls in ID this year with clubs, drop tines or something else weird goin on.

Thats an awesome Freak Nasty bull, congrats! looks like a lot of fun, must have been a little cold for the "Pack Goats"? or do you not have them anymore?
Matt

Congrats man!! Great story, great photos, and an awesome bull!! Nothing better than a hard earned bull with great friends in beautiful country! Is it September yet?!?!???

Congrats! Cool rack for sure!

Way unique bull, thanks for all the pics...brrrrr.
You must log in or register to reply here.