Hunting buffalo on the Henry Mountains in Utah was the toughest and funnest hunts we've ever been on. My friend Dave has been putting in for a once in a lifetime buffalo tag for the Henry Mountains since he was 16. At 55 he finally drew. I offered my help and couldn't wait. Our friend Mark from Nevada would also be coming with a couple of his friends.

We planned to hunt from the day after Thanksgiving to December 1st hopefully giving us plenty of time and allowing the other hunters the first half of the hunt to tag out or give up and go home.

We glassed this mountain first thing almost every morning. With careful viewing through our spotting scopes we could pick out the buffalo which were in small herds of 4 to 10. Once a group was spotted we would drive up to the road on the right side of the mountain putting us within 2 to 3 miles. The buffs weren't stupid, they never ventured close to a road. Each day began like this and all but day 6 ended in either a bull we didn't want or the buffalo giving us the slip. 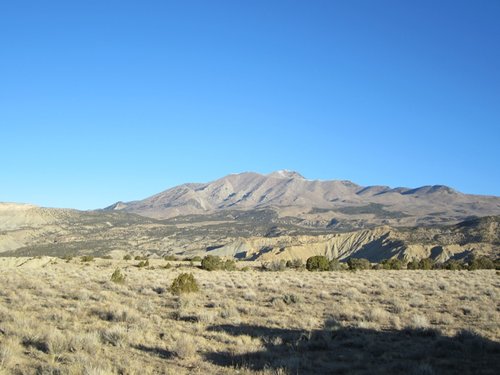 On the 6th day and after a 1 hour drive and a 2 hour hike we got close to this herd in a saddle about 2 miles from the road. We got in as close as we could until a small canyon separated us making it impossible to continue our stalk. We glassed from this point trying to pick out a bull. There was one big boy in the group that peaked Dave's interest and we watched him intently trying to size him up. With the weather forecast showing a storm approaching around midnight we felt it was either this bull or go home with tag soup. We felt this bull was mature so we waited patiently for the herd to stand and feed. Finally about 1/2 hour before dark they did. 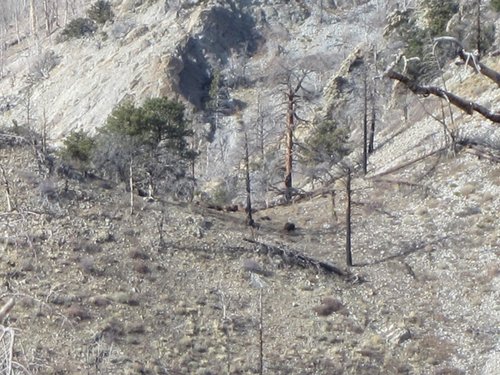 With Dave in a prone position he steadied for the shot. I ranged the bull, measured the wind and when he turned broadside Dave sent a 180 gr scirroco from his 300 ultra mag toward the bull. He missed. Shots 2 and 3 had the same result. Finally the 4th shot was followed by a sure hit by the sound of it but the bull didn't even flinch. Not wanting the bull to escape or suffer, Dave sent all his other rounds. We didn't hear a bullet hit but by his actions the bull seamed hurt. Now helpless all we could do was watch. After dark we decided we had to back out and try to relocate him in the morning. With the storm approaching we were anxious. 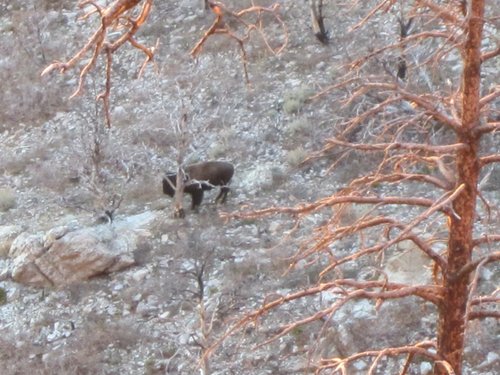 After a couple hour hike out in the dark and a 2 hour drive off the mountain we tried to hope for the best and prepare for the following day. The wind howled all night long and a storm was definitely on its way. Regardless of the weather we were committed. We woke and saddled three pack mules and three to ride then began the drive up the mountain. We were headed to a spot just below the clouds. 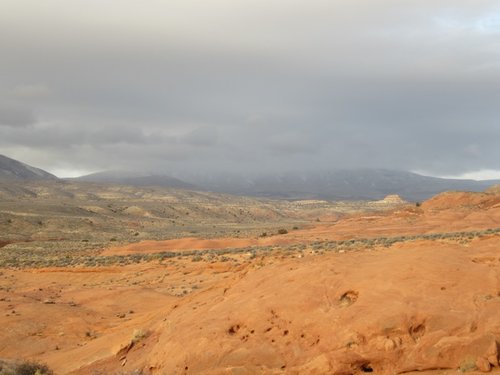 The mules made short work of the 2 miles we had to go to were we left the bull the night before. Upon our arrival we were all nervous to know if the bull was there or if we had to start tracking. To our relief, he was there and not further than 5 yards from where we left him. With nightfall only a few hours away we needed to take some pictures and make quick work of this bull. But where to begin, he was huge. 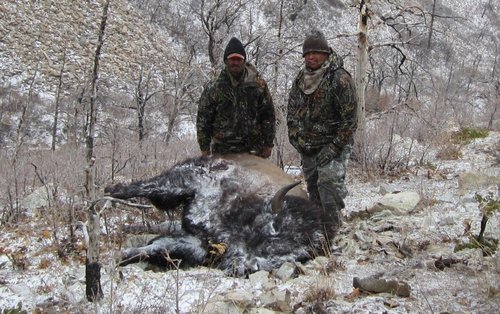 Hopefully the cold weather kept the meat and we owed it to this bull to get him out. With the meat and the hide packed we contemplated whether to cape him. We lifted the head and cape to determine its weight. There was no way one of the mules would be able to pack the head and cape in one bag. We had to cape him and do it before it got dark. Dave is experienced at capping but this big head took just over an hour. The head fit perfectly in one bag and the cape and hide did in another. 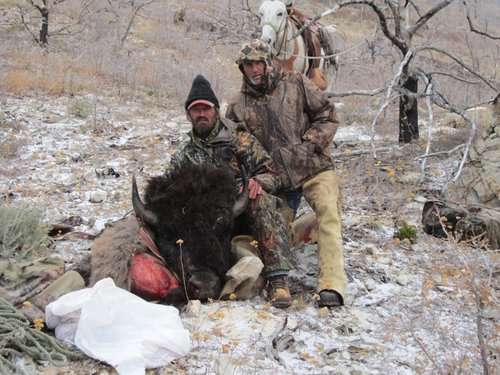 Finally we had the mules packed. Nightfall was upon us and the 25 to 30 mph wind and snow with gusts up to 50 mph made it rough and one of the scariest nights ever. We had two steep canyons to cross. The first one almost had our number. The mule with the heaviest load tried to lay down a couple times. I climbed off my mule to help and mostly to get off him because it was so steep. I slipped in the wet snow and slid right underneath him. Lucky for me he didn't spook or, well, I don't even like to think about what could have been.

We got the mules situated and we led them up the first canyon. We climbed down to the bottom of the second canyon then decided to ride up the draw then back across the face. This made the trip longer but it was sure safer and easier on the mules.

The blizzard kept its pace as did we and after 4 hours we made it back to the trailer. The drive down the mountain was uneventful even with the snow drifts . We were determined to get home and we did just before midnight.

This hunt will always be one of the most memorable. And hopefully, someday, we can do it again.
Last edited: Dec 3, 2011

That is one of my dream hunts. I have a ton of points for Henry's Bison, like many other people. Looks like an amazing hunt. Congrats.

Amazing experience no doubt you'll remember that one for along time. Thats Awesome!

I don't think most people have any idea how difficult that hunt is. It sounds like you guys were well prepared. Congrats and thanks for sharing.

Congrats. That is a seriously awesome hunting experience you had. Beautiful bull. I hope to someday draw for a wild bison. I've been on the YNP migration hunts, but that looks more like the real deal.

Definately one of the funnest and most challenging hunts there is. Congratulations.

Congratulations on that beast of a bull, I enjoyed your story and the photos.

Congrats on that great story and great photos.

Question how far was the bull when he shot & why the misses??? Range or bumped scope or nerves???

good luck to all
the dog
?

Congrats to your friend on a nice Bull.

Thanks for sharing. What a great hunt for wild bison.Very neat.

That thng looks huge. Very cool story and thanks.

Thanks for posting - dream hunt, or bucket list hunt for me and my 6 year old. This is cool!!!!!!, now to read your story

The DWR called my friend's brother yesterday to let him know he has a turned in tag for buffalo if he wants it. Looks like its back to the "sisters" after my elk hunt. If I ever draw this hunt I'll have it all figured out by then.

Looking forward to the sequel. You get to do this hunt again? Jealous

I have heard it is a brutal hunt. Definitely something I am not capable of. Congrats and good luck.

I missed this the first time around. Great story. Looking forward to round 2.

Guided a friend's brother the weekend before Christmas. The snow made it tough but we broke a trail 2 miles to where they were. Matt took her down with one shot from my 7mm sendero. We opened her up to cool overnight and hiked out in the dark. The next day 8 of us packed in, broke her down, filled our packs full and were back to the trailhead before dark. We cooked backstraps and tenderloins that night...the best ever! Turns out the cow was 14 years old with two DWR collars on. Don't know why she had two but my guess the first one was about to fail or did. Milo brought 3 kids from the neighborhood who earned their Eagle Scout just to be able to go with us on the hunt. They were packing fools. So glad they were there. They were back to the trailhead an hour before the old guys were. Wish I was 18 again. 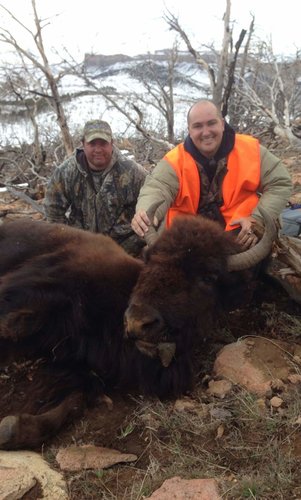 Tuesday at 11:00 AM
StrongmanHuntsBigGame
S