Over the past couple of years, I've been trying my hand at a bit of at-home taxidermy and want to share my most recent experience. Last fall I went on my first Pronghorn hunt with plans to tan the hide if I filled my tag. I was curious how it would turn out considering that most of the info I read says to not waste your time because all of the hair will fall out and leave your house a mess.

I followed the same procedure that has consistently worked for me on my previous projects and I must say, I'm pretty stoked at the way it turned out. I found this step by step process on Field and Streams website, I don't quite follow it to a T but I would recommend giving it a shot if you're planning on tanning a hide of your own. Link here >> Field and Stream link

I will say that compared to a Whitetail the Pronghorn did shed quite a bit more hair during the process but not so much that I was worried, I was also careful not to tug and be rough with it to combat any additional hair loss. Now that it's finished, some hair still falls out but in all honesty, its hair that was already loose and on the way out. I've gone over it a good bit tugging at the coat to see how it holds up and it's just fine. Since I was planning to hang it on a wall I didn't worry about breaking the hide down and getting it nice and soft, this likely helped with keeping the coat intact as well.

I figured y'all might find it interesting to check out. If anyone else has tried this I would be happy to hear how it went. 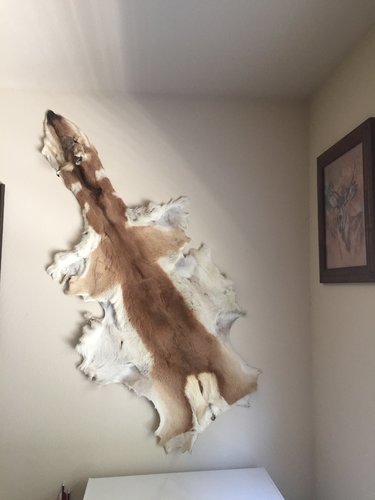 Many years ago I shot a black bear that succumbed to a bad case of ground shrinkage. He wasn't as big as a bear rug that I already had, so I thought I would tan it myself and make my own rug. I ordered a head form and eyes from a taxidermy supply company, and I bought a leather tanning kit from the local Tandy Leather store.

At the time, I lived on a remote Forest Service Ranger Station and I thought an easy way to clean the bear skull would be to put it on an anthill. So I did and covered it with a bucket held down with a large rock on top. Unfortunately, a few days later, the Ranger's Husky knocked the bucket and rock off and chewed up the skull.

Then when I took the hide out of the tanning solution, the hair slipped off the skin in big clumps, and the leather had turned blue.

At least I got 50 lbs or so of tasty steaks and burger.


Back in 1974 I still lived in NW Colorado when I shot this Muley buck. I was fresh out of college, newly married with two young kids, lived in a resort town (Steamboat Springs), and worked two seasonal jobs. Money was too tight to have this buck professionally mounted, so I decided to mount it myself. I bought a paper form and glass eyes from a taxidermy supply company, found a recipe to "pickle" the cape, and proceeded to do it myself. He's been on my wall now for over 55 years and he doesn't look too bad, if you don't look too close. And DON'T pull the hair! 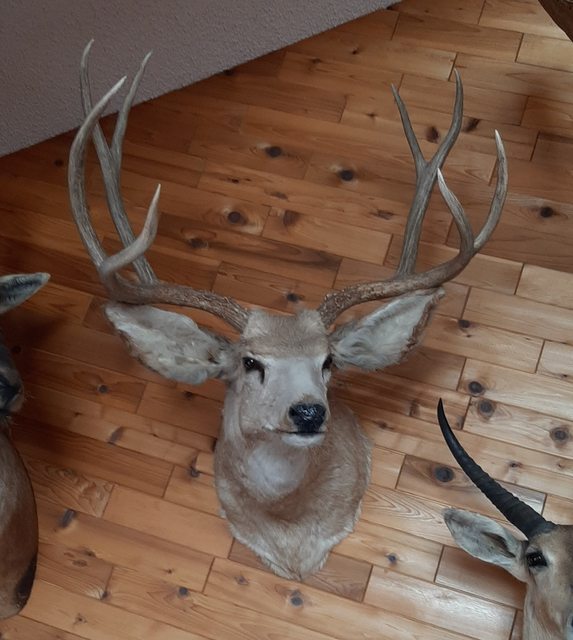 Congrats on doing a good job. In a couple weeks when it warms up just a little (not freezing overnight), I plan to try hair on tanning my white tail doe hide. I'm going to take a look at that link you have up there.
D

TheBenHoyle said:
Congrats on doing a good job. In a couple weeks when it warms up just a little (not freezing overnight), I plan to try hair on tanning my white tail doe hide. I'm going to take a look at that link you have up there.
Click to expand...

I appreciate it! Let me know how yours turns out.

I tanned my 2017 Oklahoma doe antelope and was pleased with how it came out. Tanned it in the fall of 2017 and it's holding up well with minimal hair loss. 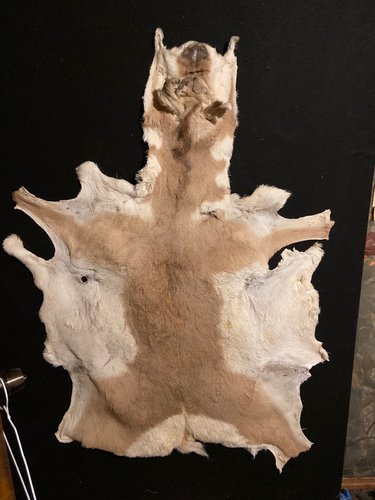 WildWill said:
I tanned my 2017 Oklahoma doe antelope and was pleased with how it came out. Tanned it in the fall of 2017 and it's holding up well with minimal hair loss.View attachment 132863
Click to expand...

Good stuff, looks like it's holding up just fine. How did you tan it?

Oh nice! That gives me hope that mine will stand the test of time, just as long as my dog doesn't decide he needs a new chew toy haha