Since we have another month or so before hunting gets going, thought it would be cool to start a thread about Deadheads. Given the miles all of us hike in the woods each fall, I am sure we have some cool picks of Deadheads (no sheds, just deadheads).

Not allowed to keep these bighorns skulls in MT, so after taking a bunch of pics, FWP was called. They asked us to bring it to town for them and provide coordinates of where it was discovered. Later scored by FWP at 199 6/8 and now resides in one of their public offices.

How it was found, laying in the sage. 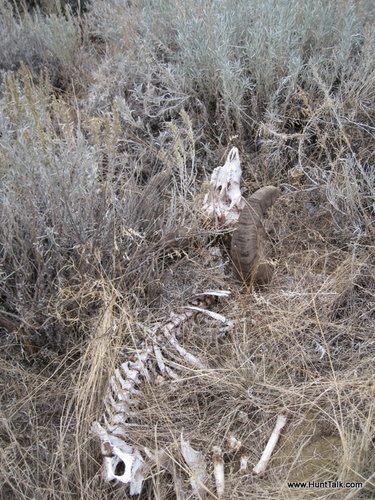 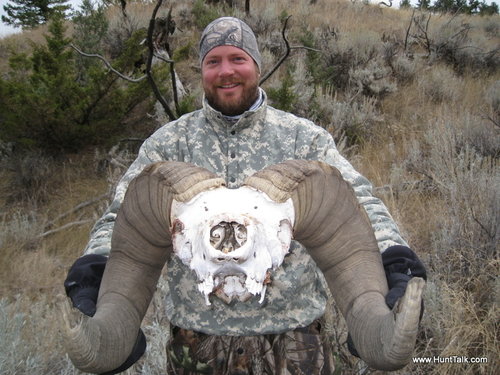 Would love to have it sitting on a pedestal in the Randy Room.

Found this guy last fall while glassing a basin for muleys in the Bighorns during archery season. Initially, I just thought it was a shed, but the more I looked at it, it just didn't look right. Once it hit around 10am, I decided to drop in the 800ft to check it out. When I got down there I found the whole carcass; which still had a fair amount of hide on it. A couple of years ago it became illegal to pick up any deadheads in WY, so I called the warden and he came out to check it out. He was really cool, and for 8 bucks gave me an interstate transfer permit and tagged it. I have some pics of it at the site, but can't seem to find them

Back at the truck 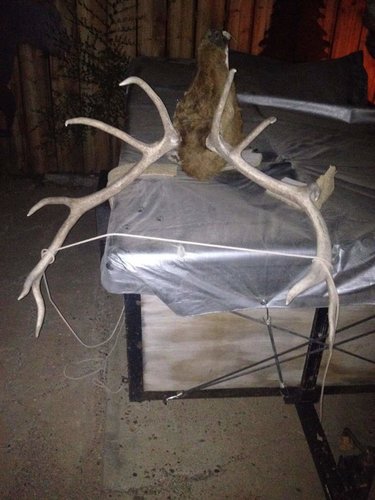 After boiling it out. It now hangs out in the garage. 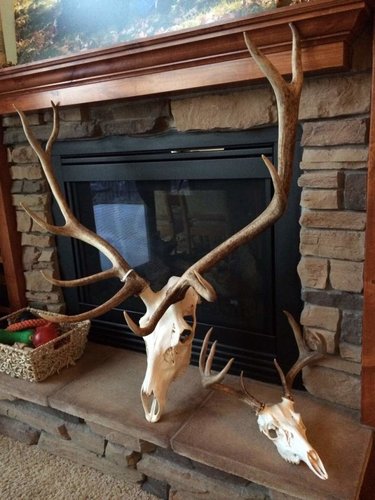 Why can I only upload 1 picture at a time off my iPhone or iPad?
Another view

That is really cool. It almost looks like someone cut them off, and left them in the crotch of the tree.

All found within the last 12 months. Would love to find a bighorn some day, I'd imagine it's a very bitter sweet feeling.

This muley was from a couple of years ago. I was shed hunting and found it.

I found this buck back in the early 80's. The head was in the bottom of a dry creek. Only the skull and the first few inches of antler was above ground. Scores around 188 gross + 6 or 7 inches of nontypical. A bit over 31 outside. I had the antlers stained and put on a plaque. I now wish I had left the head natural.
I will have to share some more pictures of dead heads I have found when I get more time.

Deadhead from NZ, found next to a wallow, Sika/Red hybrid, normal skull length for a Sika is 10" this one was 12" but had the typical Sika 8 point (4x4) configuration all be it with a bit more curve and heavy timber, very cool looking.

None for me in the limited area I have had to hunt, but I'm almost licking my chops waiting for Bambistew to post some of his. With all the miles that guy puts on he must have a few!

Idaho whitetail and the wolf that killed him....

Sorry that I don't have any as he lay pics loaded on photobucket.

A few years ago I spotted some crows feeding on something in a large field. A quick check with the binoculars revealed what looked like a nice whitetail. I asked the landowner if I could retrieve the head and this is what we found.

In scouting for my moose hunt this year I found this!

The place was a mud lake had plenty of water, and although the skulls had been put in the trees by someone, the looked to have been picked up in the area. I could see plenty of bones and other skulls in the mud.

Not a kind death.

Found this guy during rifle season with my daughter took gps coordinates calls g&f and asked if everything panned out if we could retrieve it... Few days later they said go get it and bring it in for the proper $8 tag so we did and managed to get a euro mount done before the neighbors called the cops thinking we were storing dead bodies