Day at the Range

I had an interesting day at the range this morning and I'm hoping for a little insight from the group.

First issue of the day:

I noticed that some of my cases were harder to close the bolt than normal, and some were more difficult to eject after firing. On top of that I had two cases that got stuck in the chamber that I had to use a cleaning rod to get out. I wasn't shooting a particularly fast round but here's the details:
Do you think I need to just full size all the brass? Or do you think the Federal Brass is the issue? I know I have heard from different sources that federal brass just isn't that good, is that true?


Then when I got home I noticed a very high amount of copper in my barrel. More than I have seen before. I would say I have put 40 rounds down the barrel since trying out all copper bullets (TTSX). Is it normal to get more copper deposits on the barrel when using all copper bullets? Also when do you decide its time to clean the copper back? I ask because my gun is always most accurate with a 5 round or so dirtied barrel.

There are more experienced folks than I here, but this is my input. If you have done 5 reloads and done nothing but neck re-sizing, you have several possible issues. Have you been pushing the shoulder back enough during neck resizing? Have you trimmed for length, could be too long? Have you annealed, after 5 reloads that is probably pretty stiff brass? FWIW - When I hit 5 reloads I toss my brass rather than mess around with it.

As for TTSX, I clean my barrels with wipe-out after 75 rounds or so. Don't see any accuracy difference between rounds 3-75. Haven't pushed it past 75 rounds because I don't shoot TTSX enough to demand pushing it out further than that.
Last edited: May 19, 2019

I've never tried neck-resizing, but I've heard of this kind of problem. But it certainly could be a sign that pressure is getting up there with difficult extractions you mentioned, but that also could be a problem with the rifle. If you get a little grease and gunk built up in the extractor hook, that can cause this issue too, but from what you're saying, it's probably has to do with the neck-resizing and maybe some high pressures in the loads. I've used Fed brass a little, but haven't found them inherently problematic.

How can you tell if the chamber has an issue? Also I will note I never had any issues like this with factory ammo, this is just a recent development since handloading in Jan of this year.
B

Bump the shoulder or FL resize...

What do you mean bump the shoulder?
M

SD_Prairie_Goat said:
What do you mean bump the shoulder?
Click to expand...

Set your sizing die to set the shoulder of a sized case a couple thousandths back from a fired one. It helps to have the measuring tools to do this. mtmuley
D

First check the OAL of the case. If it's to long the neck could be in the lands. If so it can be squeezed into the bullet by the lands and the result is a pressure spike. Can be noticed by hard bolt lift and extraction. If the bolt close's hard, I think you said it did, probably need to "bump" the shoulder. Bad word bump, you cannot move the shoulder at all without resizing the whole case! What you do is partial resize the case so the shoulder is moved enough to clear! A case needing it will leave you either not being able to close the bolt on the case or you will feel the shoulder dragging when you close the case! Another problem could be not seating the bullet quite deep enough. If the bullet get's into the lands, you can feel it, about the same as the bolt closing on a oversize case a bit hard. Good thing about the bullet touching is you can not only feel it, you can see it. Take the round out and look at the bullet at the ogive. If it touched the lands you'll see marks on the bullet at the lands. No need for black marker, you will see them. They are there and the seating depth needs adjusted.

Now back up. Fit the case to the chamber. New case will fit the chamber, no sweat. Neck size with the FL die. You'll be able to see the where the neck portion of the die stop's on the neck of a once fired case. Leave it long like that till the case will no longer chamber when it's MTY! Then start setting the FL die down a bit at a time till the case will chamber. I like to go until I can n o longer feel the neck rub when I close the bolt. When you get there, lock the die down and dedicate it to that rifle. At that point it will always fit the case to the chamber of that rifle. I do not measure OLL to the ogive. Rather I get the length through a process of marking a cleaning rod inserted in the bore. You use a bullet to do that and that is the bullet you need to use through the process. When you have it seated as the cleaning rod suggest's, the bullet will touch the lands. You need to seat it a bit at a time until it no longer touch's the lands. Same bullet all the way. reason is some bullet's length from the ogive to the tip change and you switch bullet's you change the length just a hair, bad hair to change! After each adjustment try the case with the bullet in it in the chamber. The bolt can close pretty easy anf the bullet still touch the lands. Look at the ogive. If the land marks are there go a bit deeper. Remember the length from the bullet to the tip can change with each bullet! Once I have the bullet coming out with no scratch's at all by the lands, I lock the die in place and dedicate that die to that load. Bear in mind that I only load one bullet in each of my rifle's. I don't fool around with bullet's once I have a load I like. Now the ogive to land length. You load two case's in the dies set at the same place and you can easily get two different OLL for them by nothing more than using two different bullet's. The data in the loading manuals is not adjusted to set the bullet a bit off the lands, it is set to make sure the ammo fit's into every rifle chambered for that cartridge. In other words, you'd end up with ammo set like factory ammo! The OLL on every round could be different but the ammo still fits in every chamber! If your loading close to the lands you cannot get away with that!

You have two or three different cause's it could be and you need to learn to sort through them one at a time to make the loaded case's properly fit your chamber.

Alright, more testing and a little more shooting but here is what I did on this last batch:

Not sure where to go from here to be honest... Is there other measurements that would be useful from the case that got jammed? I tried to take some picture of my chamber if that helps anyone... Going to be honest, this was a little difficult to do with an Iphone haha! 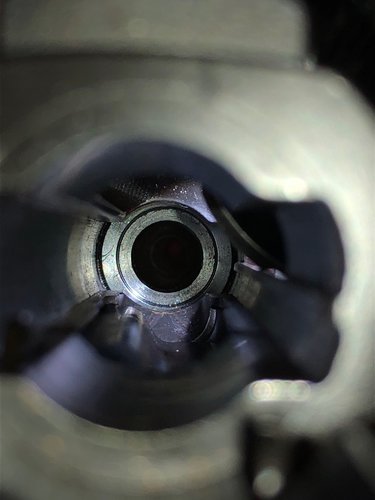 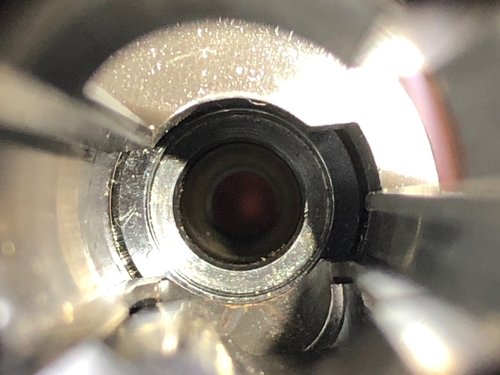 Don, I appreciate the advise, but how do you adjust the neck size on the die? I'm using Lee dies if that helps... Do I just crank the whole die further into my press?
H

This sounds like a pressure issue if your bolt closes fine on the round and you FL sized to spec, etc... is your seating depth to spec? Does the issue happen at min load?

Seating depth is below max overall length, happens far less at the lowest end of the powder scale 44g

Sounds like at least part of the problem is too much pressure. If they chamber without issue but are difficult to extract, seems like a pressure problem. Could also help explain the issues with chambering and extracting the previous cases that were only neck sized.
H

Try loading a few at minimum charge and exact recommended OAL. If it still happens then I suspect there is an issue with your chamber.
I

Difficult extraction is a pressure sign. Sure you’re not getting ejector flow?
T

How deep are you seating bullets off the lands?? I had a rifle that would show really bad pressure signs when seating barnes bullets close to the lands. But was fine with a .070 jump or more

HiMtnHntr said:
This sounds like a pressure issue if your bolt closes fine on the round and you FL sized to spec, etc... is your seating depth to spec? Does the issue happen at min load?
Click to expand...

HiMtnHntr said:
This sounds like a pressure issue if your bolt closes fine on the round and you FL sized to spec, etc... is your seating depth to spec? Does the issue happen at min load?
Click to expand...

Sounds like a pressure issue to me also. If the neck was to big around you could ream or turn them. I've never seen a case like that and I have seen many thousand's. The rounds go in alright but the problem sounds like it always come's after firing. Stuck case is a definite pressure problem. Need to find out what is causing the pressure.

Should be plenty back from the lands, I'll look in my reloading diary to confirm that tho.

Tonight I'll load up some min loads and test that and maybe play with bullet seating at the same time as a test.
I

My guess is that you’re using too much powder. Every barrel is different, and some reach excessive pressure at lower powder charges than the manuals say. Neck sizing only for more than 3-5 reloads requires very hard brass(Lapua) AND mild loads. Even then you have to bump the shoulders eventually. That’s why most competitive shooters have gone back to full length sizing. The reason they can get such good results while full length sizing is that they have custom chambers, and in many cases, custom dies that give them a very tight fit between the cartridge and the chamber even after full length sizing. Neck sizing allows you to get that tight fit without the custom equipment, but it does eventually grow too tight. Even so, if the bolt closes easily, but is difficult to open, you have a pressure issue that is not cause by the neck sizing.
H

SD_Prairie_Goat said:
Should be plenty back from the lands, I'll look in my reloading diary to confirm that tho.

Tonight I'll load up some min loads and test that and maybe play with bullet seating at the same time as a test.
Click to expand...