I took a drive and visited Coller State Wildlife Area Thursday. Thought I would share some pics. The SWA lies along the Rio Grande River between Creede and South Fork, about 3 miles upstream of the Gold Medal section of the river. It is an elk winter concentration area and supports a population of Gunnison's prairie dog, a "species of greatest conservation need" in the Colorado SWAP, and a USFS sensitive species. The Central San Juans bighorn sheep herd resides just up the road, and two collared rams spend some time in the cliffs NE of the SWA this spring.

Here are a couple of pics from the North Unit of the SWA. 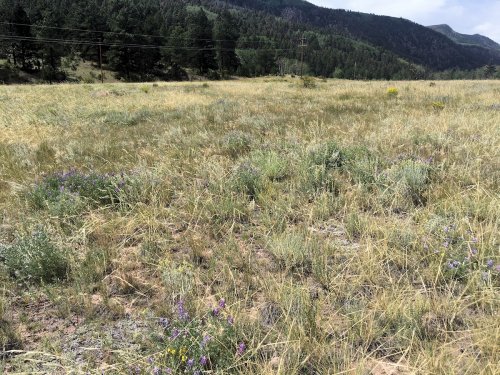 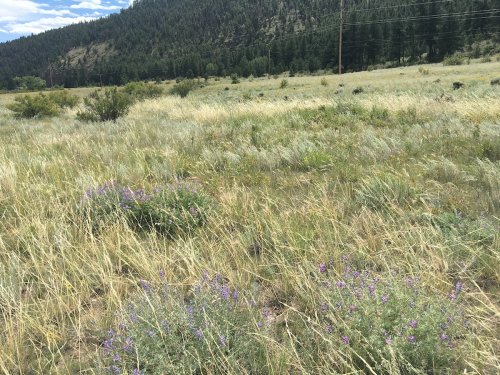 After stopping at the North Unit I drove down the road to the South Unit. 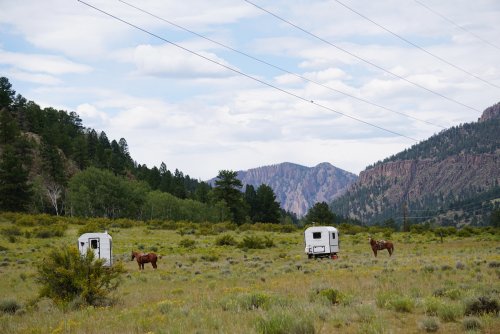 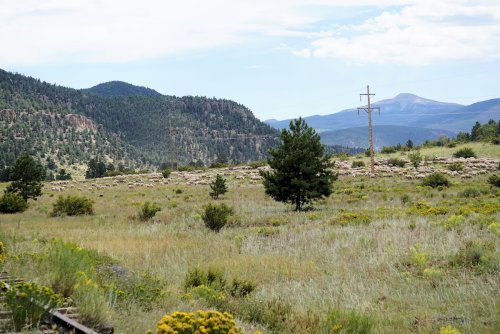 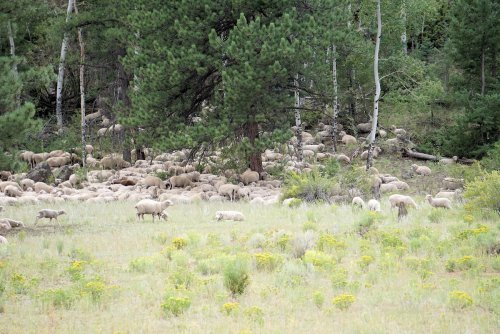 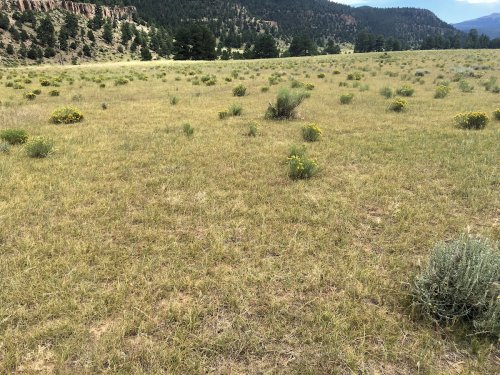 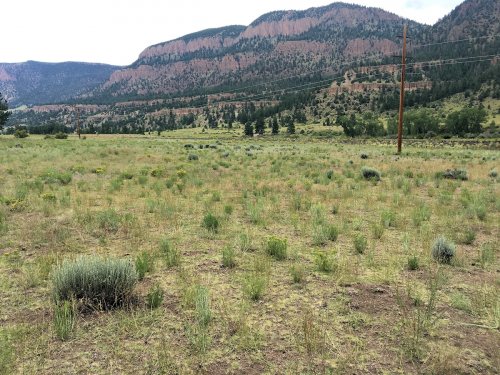 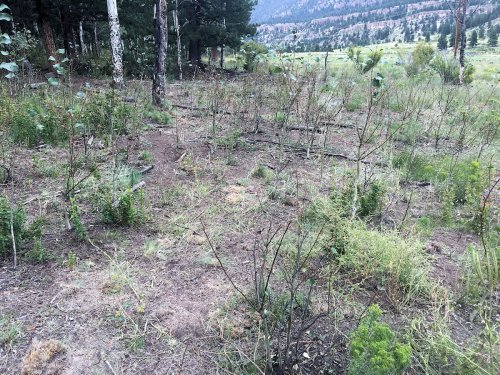 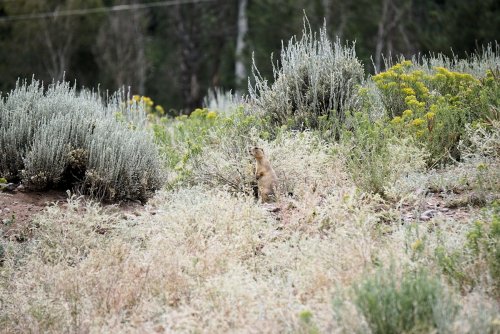 Looking across the highway to the east of the South Unit. 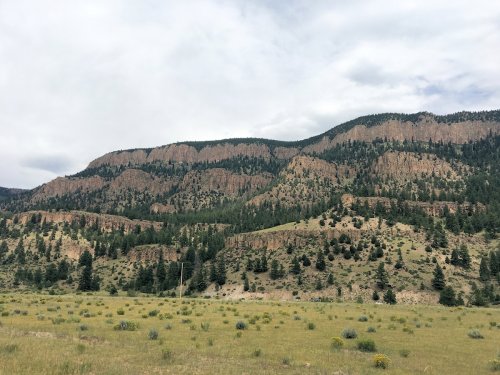 Overall a good day driving through southern Colorado, with about 8 hours of windshield time.

Seeing the sheep industry having so much sway in CO and NV, I'm at a bit of a loss as to why MT is the brunt of sheep jokes.

Humor aside, I am grateful for all you do, Oak. I wish there were more active wildlife advocates in CO to help you and your small group of co-conspirators. We are indebted to you and the handful of others doing all you can in the face of such overwhelming opposition.

So you seem to be hinting that the range down south isn't quite in the best of shape compared to the north end Any guesses as to why, Oak??

And those quaint little "tiny homes" down south are interesting. One could load those up and follow ones herds just about anywhere one wished to go, spreading their M.ovi throughout the spectacular landscape.

Is grazing allowed on SWAs? That would be news to me. I've had a couple great fishing days along that stretch, I'll be through there in two weeks my the way to an elk...

LuketheDog said:
Is grazing allowed on SWAs? That would be news to me.
Click to expand...

Domestic sheep grazing on this SWA was initiated in 2016 by the USFS as part of an alternative allotment for a producer that was being moved from high elevation allotments due to the risk to bighorn sheep. The new allotment consists of 7 disjunct pastures that the permittee trails between for 2.5 months. A bighorn sheep risk assessment completed by the USFS in 2017 found that the new allotment is "high risk" for bighorn sheep contacting the allotment. The risk assessment determined a "contact rate" of 0.98/year. For comparison, anything over 0.08/year is considered high risk. The CPW comment letter for the analysis states:

The development of the Wishbone Allotment has been collaborative and will help create effective separation between domestic and bighorn sheep, while continuing to provide public land grazing opportunity for local livestock producers. Local CPW District Wildlife Managers (DWMs) and Terrestrial Biologists have worked with Divide District Staff to develop portions of the proposed action, including using the Coller State Wildlife Area (SWA) for domestic sheep grazing to help create effective separation.
Click to expand...

At the end of the grazing season in 2017, at least 54 dead or stray domestic sheep were found scattered throughout the area over the course of 35 days following trailing off of the domestic sheep for the year (see attached below).

This summer, the USFS completed a Supplemental Information Report for this decision, which incorporated bighorn sheep GPS collar data collected by CPW. The new risk analysis found a contact rate of 1.26/year, or 27% higher than the original analysis. Inexplicably, in both the 2017 and 2019 analyses, the USFS failed to include all bighorn sheep herds within 35 km of the allotment in the risk assessment, as the risk model requires. They excluded two neighboring herds totaling 765 bighorns, both of which have been shown through telemetry to be connected to the herd nearest the allotment. Since contact rate is additive, including all neighboring herds as required would substantially increase the predicted contact rate, which is already 15.75x higher than the "high risk" threshold.

Additionally, in July of this year, two bighorns were observed on one of the allotment pastures about a week prior to when domestics were going to be turned out on the pasture. The USFS decided to have the permittee skip that pasture in the rotation for 2019. Luckily the permittee had started his grazing rotation late this year, or the domestics would have been on that pasture at the time of the bighorn sighting.

The USFS is currently being sued by WildEarth Guardians and Western Watersheds.

kansasdad said:
So you seem to be hinting that the range down south isn't quite in the best of shape compared to the north end Any guesses as to why, Oak??

And those quaint little "tiny homes" down south are interesting. One could load those up and follow ones herds just about anywhere one wished to go, spreading their M.ovi throughout the spectacular landscape.
Click to expand...

..
I though those were High End Horse outhouses...

Is this unintentional incompetence or willful failure to follow their own guidelines?

Shocking , and yet not shocking

kansasdad said:
Is this unintentional incompetence or willful failure to follow their own guidelines?

I believe, based on some personal conversations, that the initial 2017 error in conducting the risk assessment (not including all herds within 35 km) was an unintentional oversight. The decision to authorize grazing on a high-risk allotment was based on some arbitrary assumptions:
Clearly the USFS made the decision to not expand the risk assessment out to 35 km in 2019, as the point had been brought up in 2017. They do mention the neighboring herds in the 2019 SIR, but do not include them in the analysis. ??? They also state that, despite the increased risk identified in the 2019 assessment, the mitigating factors listed above are still relevant.

Interestingly, the domestic sheep permittee filed an objection to the 2017 decision that authorized him to graze on this allotment, citing not enough forage and a greater risk of straying domestic sheep. Indeed, there were at least 54 stray domestic sheep in 2017, and drought conditions in 2018 kept the allotment from being stocked at all that year.

It seems to me that the risks of exposure are high enough, and a threat to an entire mountain range population, and not just an individual bighorn or two, thus the domestic sheep must be contained in areas that have less risk than you are showing here.

Help me understand something please........does transmission of M ovi require actual nose/nose (or other physical points of contact) contact, or if domestics are on the ground, leaving waste and then leave, is there a residual infection potential to M ovi naïve bighorns?

Transmission requires close contact, but not necessarily nose to nose contact (aerosol transmission). Also, transmission does not always occur, even when bacteria are present. M. ovi. cannot survive long outside of a host.

Read Carpenter et al. (2014, attached) for information about the risk of contact model.

^^^^
Thanks for the link. Getting my bifocals on to dive in

I strongly dislike domestic sheep in wild places. Seeing what they have done to some places I have hunted elk and deer, let alone their disease transmission to wild sheep, is pretty upsetting. When a group of sheep gets pushed into a drainage for a week of grazing it seems like all animals flee and it looks like a moonscape once the sheep finally move on.
You must log in or register to reply here.
Share:
Facebook Twitter Reddit Pinterest Tumblr WhatsApp Email Link
Top