TLDR: I was able to harvest a bull elk during my first archery season.

For those that want a story:

Last year, I went hunting for elk during the first rifle season in Colorado. Anyone familiar with the area and time will tell you that we got a decent snow storm in the high country just before the season started. After climbing around in the mountains for a few days in knee deep snow - I decided then and there I was going to start archery hunting.

Fast forward a year and September finally came! I had been practicing with my new bow in the backyard most every day for the past 9 months. I would also occasionally hit an archery range that had 3D targets at various distances. I was even able to practice on those targets out to 80 yards and beyond, although I limited myself to a 60 yard and under shot while hunting. Opening day came and I was in the spot that I had scouted all by myself. At sunrise, I saw a lone elk coming down off of a ridge right for me! Needless to say, 'buck fever' kicked in and I was shaking beyond belief. I waited for the elk to come down to tree-line and then I got off of my glassing spot to head him off. I made it down into the valley below him and started to cow call. I didn't hear anything so I started to climb up the hill (100 yards) towards him slowly. I made it above tree-line and didn't see him. I figured he must have taken kind of an angled route to the valley so I high tailed it back down into the valley floor. I started to traverse the hill along a game trail when all of a sudden, I saw him turn tail and run away. A nice 5x5 bull - 20 yards away - gone.

Due to other commitments, I wasn't able to get out much during the rest of the season until finally the final weekend of September presented me with a chance to head out for a 3 day weekend with my neighbor whom also had an elk tag! We left early Friday morning and hunted our way in to our camping spot - we didn't see a single animal. By 2 PM, we had made it 5 miles in, across a few ridgelines, and set up camp high in an alpine basin above tree-line. We rested for a little bit and decided to climb up a small finger ridge to get a better view of the valley below us. We glassed for about 2 hours and came up with a lone mule deer 2 miles below and a lone moose. After we figured that elk weren't around, we decided to try calling. I let out a few cow calls using both a diaphragm and an external reed call. My neighbor did the same. I also let out a lone locator bugle - because - why not? We weren't seeing anything anyways. 5 minutes later (about 615 PM), my buddy smacks my arm and tells me there is a bull elk coming towards us - 100 yards away. We were above tree-line so there was nothing between us and the bull except a 2 foot tall pile of rocks and a little drainage.

The bull kept coming towards us so when he hit that little drainage, I picked up my bow and high tailed it down the ridge towards him. I made sure to cheat my way to the lee side of the ridge to keep the wind in my favor. I finally got to a point where I saw the tips of his antlers so I started to crawl forward toward the aforementioned pile of rocks. Once there, I could see him and he was still coming towards me. I sat up on my butt and ranged some features near where he would show up better. Once he came out from behind the rock pile, I drew my bow and the elk stopped and watched me. He was facing straight towards me so I didn't feel comfortable taking the shot. When I let the bow down, he did a quarter turn and stood there watching me - confused. I drew back my bow, guessed him at 40 yards, and released.

I watched the elk turn and run down into the little drainage. As he ran away, I saw the arrow fall to the ground. I figured that I must have misjudged the wind and the arrow hit his front shoulder and didn't penetrate. After he turned and went behind a small knob, I walked up to the point where he was standing - blood on the ground. I found my arrow and saw that it had broken in half and that I was holding the back half of the arrow. Again, blood on the first few inches. I sat my hat there and my bow, turned, and went up the hill to collect my partner and my pack. We came back to the spot, started the tracking portion of OnX, and started following the blood trail. I was on the left of his tracks, my neighbor on the right. We both were able to follow blood on both sides of his footprints. We turned the corner around the knob and there he was - not 100 yards from where I shot him!

We were able to quarter him before going back to camp and then in the morning we came back to debone the quarters and start the haul. The pack out was pretty miserable if I am being honest. We were able to do it in 1 load, but with half an elk on your back, it was not pleasant.

Needless to say, I cannot wait to do it again. 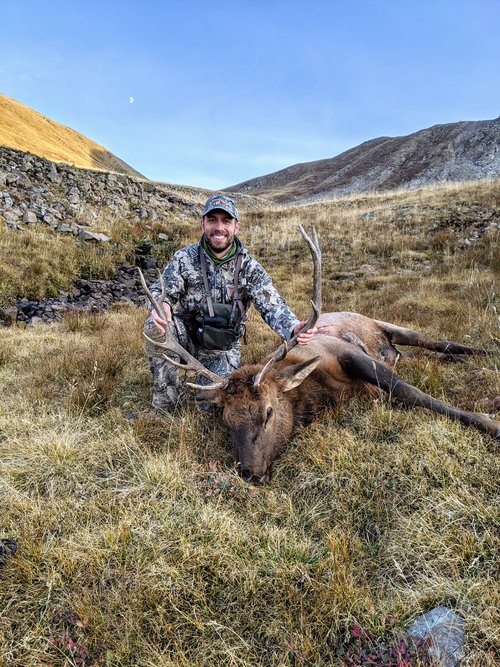 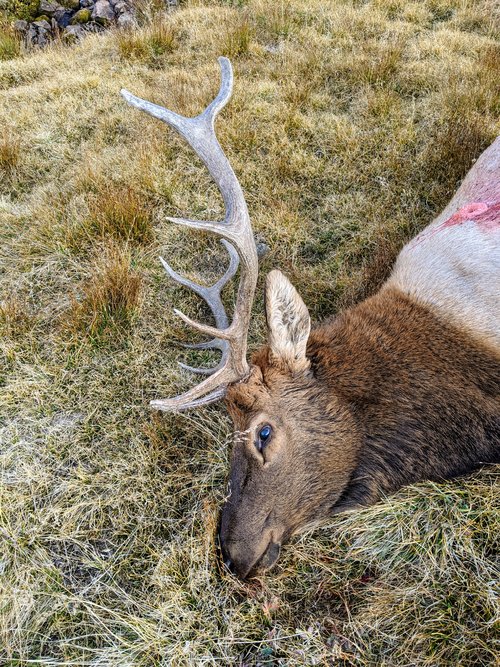 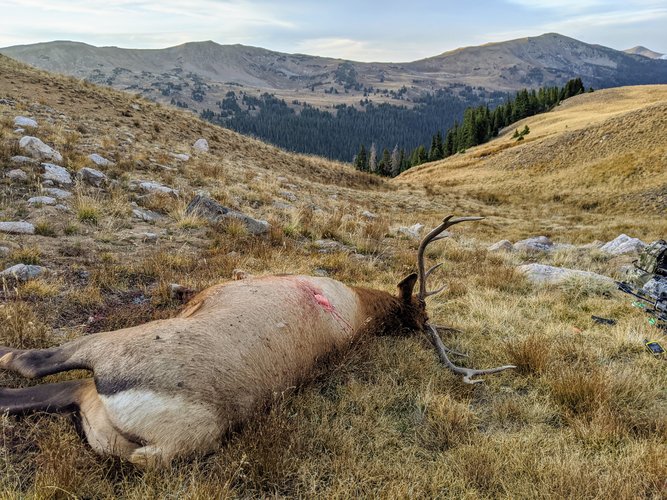 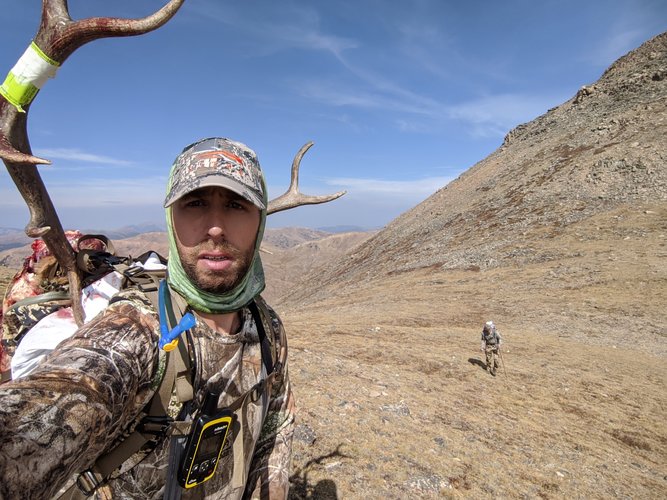 Congrats and Nice work going after it, making it happen!!!!

Nice work. Looks like a great adventure with a perfect ending.
F

Wow! That all came together perfectly it sounds like. Congratulations!

Congratulations. Great write up and pics!

Congrats! Great story and thanks for sharing!
B

Great job! Your patience on the first draw is admirable.
You must log in or register to reply here.