Experience calling black bear? I just read an article on Gohunt, and it got me fired up. I’m a decent yote caller.

I have an in-law that shot a charging black bear after calling it in, and he’s a reputable source. I’m a bit of an adrenaline junky.

Tips? Tricks? Awesome stories!?! I can’t hunt Spring this year being in Washington…

So a couple weeks ago I called a bear out of the woods into a clearing to see what I was with a rabbit call. My son got a shot but missed (we didn't know at the time if he had hit or not, bear reacted like he was hit) so we backed out and went in the next AM to check for blood and found none it was a clean miss. At that point, since we were there, and knew the bear had been close I called for about an hour an waited about 90 minutes total and never saw anything. I'm guessing he was down wind and I think we educated him real good that a call = humans. I say that because later that evening he came out one ridge over and just came out of the woods for 5 seconds. I ripped the call a few times as I was laying on the group with a doped rifle ready to shoot and he never came back out.

I foolishly tried it a few years ago in a spot known to have both flavors of bears. Any amount of noise that I couldn't see was absolutely terrifying. Definitely a 2 person job in books. All I called in was a cow moose with a calf that required much more attention than I was prepared for.

It was just like calling in coyotes they either respond or they don't. I'd try it again where conditions were right and maybe if I was with another person.

I called in the last bear I shot. I'd seen several bears in the area that evening, so it wasn't necessarily blind calling. I just used an elk diaphragm and started squealing on it- not 10 seconds in and a boar ran in on me to about 10 yards, startling both of us when he hit the brakes. My recommendation would be to set up in an area with good visibility so you can see them coming, but not so far from cover that the bear is going to feel vulnerable checking out the noise.
L

I've heard loud and continuous is best since they have such short attention spans. some decent videos on youtube about it. Last fall was first year I tried calling but no luck for me.

I've called in three that I could either see or had recently seen and knew they were in the vicinity. Thay all came running in after only a couple sequences on my cheap Primos coyote call. Always exciting having a bear come charging in on you.

I have been really tempted to blow a predator call when I'm on a long stalk and a boar has vaporized into the timber. For those who've done it a fair bit, will they bother to circle to get your wind, or just "they're coming in or they're not"?

SnowyMountaineer said:
I have been really tempted to blow a predator call when I'm on a long stalk and a boar has vaporized into the timber. For those who've done it a fair bit, will they bother to circle to get your wind, or just "they're coming in or they're not"?
Click to expand...

I had a buddy call one from 1/4 - 1/2 mile away that we could see across the Eel River. As long as he was calling the bear kept coming, the bear would stop when he stopped calling. He crossed onto our side and came within 33 yards of me. Once he hit my scent he was outta there and across the river in roughly 5 seconds. 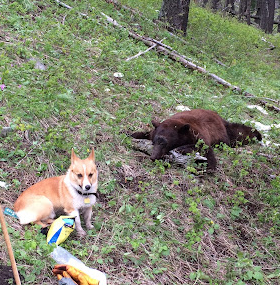 I used to, but always worried about calling sow off of her cubs and not realizing it until it was to late.

SnowyMountaineer said:
I have been really tempted to blow a predator call when I'm on a long stalk and a boar has vaporized into the timber. For those who've done it a fair bit, will they bother to circle to get your wind, or just "they're coming in or they're not"?
Click to expand...

I’ve only tried it twice. Both last spring. Both came in on a string. First one was a sow that came charging like she wanted to eat me. Second was this tank…and I shot it.

Drake4 said:
I’ve only tried it twice. Both last spring. Both came in on a string. First one was a sow that came charging like she wanted to eat me. Second was this tank…and I shot it.
Click to expand...

Good grief man. Lets see a grip and grin of that bad boy.

wllm1313 said:
Called one in one time in MT… she came screaming in… pro tip don’t bring a corgi with a napoleon complex with you
View attachment 223009
Click to expand...

That is an outstanding photograph.

Probably not the smartest thing I've done but while bowhunting elk in AZ, I saw a black bear about 60 yards away. I wanted it to come closer so that I could take a good pic of it so I blew my fawn bleat. It didn't react at all. It was a large bear and when I blew the call some more it just yawned and started walking sluggishly away from me. I was a little disappointed.
G

I tried it once, but I must not have done it right. The bear was messing around in some thick brush, and I thought I might call him out into the open. He just huffed, and pounded the ground then walked away.

It sounds like using fawn and calf calls is best. I guess getting really gutsy would be specifically hunting calving and fawning grounds. Bear meat and improved recruitment?

Have a friend that does a lot of bear calling. He recommended to me to have the bear within sight before doing it because a sow will stash her cubs and come in to the calling. 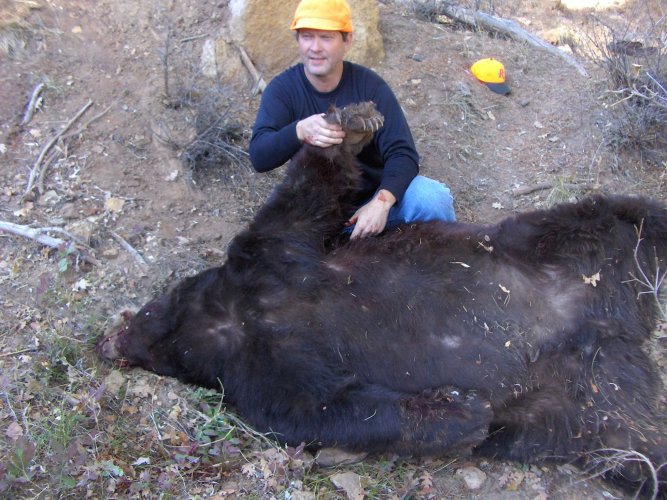 This big boar came in hard to a jackrabbit in distress call. Have one in the pipe before you start calling.

I've called in a bit over 60 bears so far, I don't do it near as much as I used to but I still call in a couple on a yearly basis.

In a nut shell....yes you can call bears. I've found them to be mucho easier to get to come to a call in the fall. Reason being, once they hit hyperphagia (basically a stage they hit where they're feeding 20 hours a day getting ready for hibernation) so they're non stop looking for grub.

Will they come to a call in the spring or summer, yes they will but in my locale they don't respond as readily then.

I like to decide ahead before I start to call whether or not I want to take the bear. As most all bears that are coming at you seem to look big....I prefer to call with another person, mainly because I've found that with the amount of volume I need to get them to come I can only last on the call (I only use mouth calls, personal prima donna belief call it) about 45 seconds to a minute at most. I like to set up so that I can see my calling partner that way when I'm about gassed I can give my partner a nod and they can take over. I've found that once the calling stops that the bruins loose interest fairly quickly. Plus if you have a calling partner you can set watching different directions.

My favorite call is made by a company called Crit'R Call, they're an open reed call and I like their biggest call. Though I've called them in with many different calls, even used a peacock call once upon a time. I like it because it's loud and I can make a lot of noise with it!

I like to get within a quarter mile at most and with no big physical barriers between myself and the bear. By that I mean water and such. Once I start calling I go as hard as I can and don't let up!

I've found that 1/3 of the bears won't pay any attention at all, one third will mosey back and forth and generally move my way out of curiosity. Now the last 1/3 will up and come mach 4 with their hair on fire!! They're coming hard to kill and eat period. That's the bruins that are fun to call. Generally large boars. Once they break a point where you wish to take a shot, stop calling and that'll generally get them to slow down and start hunting for you (call source).

I won't use a cub call, as 75% of the times a sow with cubs will put her young up a tree, and then come to investigate. That's also a reason why I don't like "cold calling" (calling without first seeing the bruin), I want to watch them for a bit before I start to call so I can see if it's a sow with cubs or not.

Might be more info than you wished for, but take it for what it's worth and best of luck to you.

No, I’m looking to learn. We have to make sure to cover all bases. I don’t want to give any ammo to the killing sows with cubs argument. I appreciate the willingness to share.
You must log in or register to reply here.