I am fortunate enough to get to hunt all over the west every year. I really look forward to these hunts. They are challenging physically and mentally. I love how there is public land every where you look on the map. The animal density and diversity is unbelievable. SC isn't necessarily like that. I tell people all the time the toughest hunting I do every year is on public land in SC. We do have public land especially if you're willing to drive a little ways, but the vast majority of hunters in SC hunt private. Most guys here look at you funny when you say you hunt public. Most think its too crowded or there aren't any deer there. When people tell me they want to go hunting but don't have anywhere to go I tell them to hunt public. It usually doesn't go over well. SC is an opportunity state. We have a long season and you can shoot multiple bucks and does each year. We have a good population of whitetails, but the bucks just don't get that big. The state record typical is 176" and a big buck is 190lbs live weight depending on the location and food source. Killing a big buck is tough. Killing a big buck on public land is really really tough. The majority of public land guys aren't very selective. If it has antlers it's getting shot. I'm fine with this. It's their tag. Its their land too. Shoot what makes you happy. My goals aren't their goals.

9 years ago I really got into public land hunting. Before this I primarily hunted private with some great friends, but I made it a goal to kill a black bear in SC. My only option to accomplish this goal was to hunt on public land. I was 25 at the time and I didn't know anything about hunting public land or scouting on public or bears. I started learning. I would drive 3 hours and hike and scout and drive and hike and scout. Look at maps and ask questions. The learning curve was severe. It took me 3 years, but I finally got that bear. The feeling of accomplishment I felt was unbelievable. I knew at that point I would keep hunting public. I made it a goal to kill a mature buck on public land. I didn't realize that would be equally difficult if not more so than it had been to get my bear. I had killed a lot of good bucks on private land. I thought I would have public land whipped in no time. I was wrong. 2 years later I killed a good buck. I was happy. I was proud. I felt accomplished. I had it figured out!!! I was wrong again. I hunted hard, but I still had a lot to learn (I still do). I kept telling me friends "I feel like I'm getting close to getting a big one". I started to get pictures of really big bucks consistently on camera. In 2019 it started to come together for me. I missed a nice buck with my bow than I killed a good buck on opening day of rifle season. In 2020 I limited out on public and killed 2 good bucks and passed a few other bucks to make sure I used my tags on good deer. This year I set the bar high. I told my friends I'm not shooting bucks on public unless they are big and I 100% planned on keeping that promise.

That brings us to a couple days ago. In SC we have 2 ruts depending on which part of the state your in. In most of SC the prime rut dates are Oct 20th - Nov 10th. Give or take a little. In the mountains of SC the rut is a month later from late November to early December (Thanksgiving is prime time). Some of the biggest bucks in the whole state come from the mountains because its one of the few places you can get back miles from road and most guys wont go in that far. My goal was to save my buck tags until rifle season during the rut primarily up in the mountains because I felt like that would be where I could potentially make it happen and punch my tag(s) on a big deer. Archery season where I live (not it the mountains) is open from September 15 - October 10th with rifle season opening on Oct 11th. This past Wednesday I headed out in hopes of shooting a doe. I decided I would go to a piece of public I'd never been to before, but a friend of mine hunts it a decent bit during archery season. This piece of property is only about 30 minutes from my house. I asked him if there were any spots he could suggest where he'd never hunted or even hiked in before that might look decent. He sent me a pin and said "Try this spot. I've never been in there before, but when I drive by it looks decent". My hope was to walk down a closed road and find a deer crossing, sit down and shoot a doe. On the way to the property it started to rain. Not a light gentle rain, a load up the ark type rain. When I pulled up to my location I remember thinking "I didn't bring my rain gear". I thought "I've been wet before and I'll be wet again" so I changed my clothes and I started to hike in. The rain began to slacken up a bit and 10 minutes after I left the truck the only water coming down was dripping off the trees. I have to be honest, this is my absolute favorite time to hunt. Right after it's rained hard for a while. You can be very quiet slipping through the woods. The moisture knocks your scent down and the dripping covers the sound of your movement. As I quietly walked up the closed road I began looking for deer sign. The rain had washed away a lot of the sign, but I started seeing some tracks here and there and than I saw a scrape. About 5 minutes later I saw another scrape and I could tell it had been worked hard not long before the rain. This really didn't get me too excited because I find scrapes all the time and finding a scrape and killing the buck that made it are 2 very very different things. The other thing was I really was just trying to kill a doe. I wanted to find a bunch of tracks or a heavily used trail so seeing the scrape wasn't a big deal. About 50 yards farther up the road was a 100 yard sweeping curve to the left. As I began to walk around the curve I saw a deer walking up the road. Because of the vegetation that stuck out in the road all I could see was the deer's lower half. I felt pretty confident it was a buck. If you spend enough time in the woods you learn to pick up on little subtleties between the 2 sexes that aren't just antlers and bucks and does have a lot of differences. I leaned out slowly into the road to see a bit better and looking through my binos I could see the left side of his rack through the brush as he worked his way up the road towards me about 90 yards away. I quickly ducked into the woods and found a spot where I could stand behind some dogfennel. I would have a 10 yard shot of the road if he continued on his current path and he was big enough to meet my qualifications. My guess was this buck would continue up the road and freshen the scrapes I saw earlier. I stood as still as humanly possible for 2 minutes. I watching the road like a hawk, but nothing came by. I began to wonder if he was still coming, but I didn't want to jump out into the road and blow my cover if the buck had just slowed down to work a couple scrapes on the way to me. I heard a sound behind me and about 12 yards away I turned my head to see a piece of dogfennel bend over then go back up. I said "That's a bird". Than another piece bent over, than another, than another coming right towards me. As I turned my body around a big rack and big body appeared walking right by me. I picked a spot and fired. The buck was at 20' (yes, 20 feet) when the shot went off. He never saw me. He had no idea I was there. I've never been so close to a mature animal and them be completely oblivious to my presence. The buck bolted but a few seconds later I heard a crash followed by a deep sign. I began to shake and I didn't know what to say. I wasn't positive how big the buck was but I knew he was a mature deer. I had only been gone from the truck for 25 minutes. It felt like I cheated. This kind of thing doesn't happen. I waited 15 minutes than I couldn't take it any more. I eased in the woods and 20 yards from where I shot laid the biggest buck I'd ever even seen in person on public land. My 2nd biggest whitetail ever. I couldn't believe it.

It was a crazy hunt that I know I'll never forget. I feel like sometimes getting out there when the other guys stay at home is 1/2 the battle. You never know when it might happen. My goals haven't changed and I hope to fill my 2nd public land tag with a big mature buck. Sometimes all the hard work pays of in a positive way. 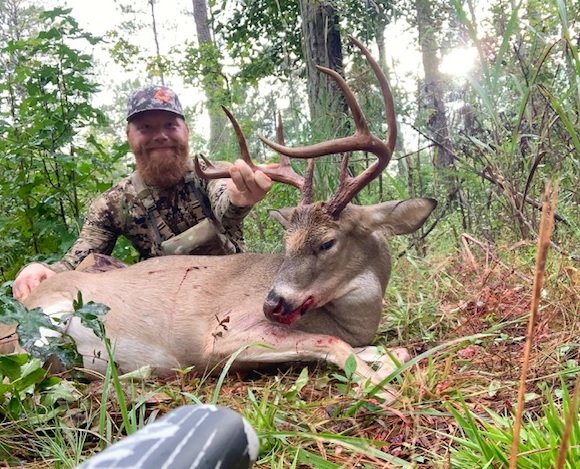 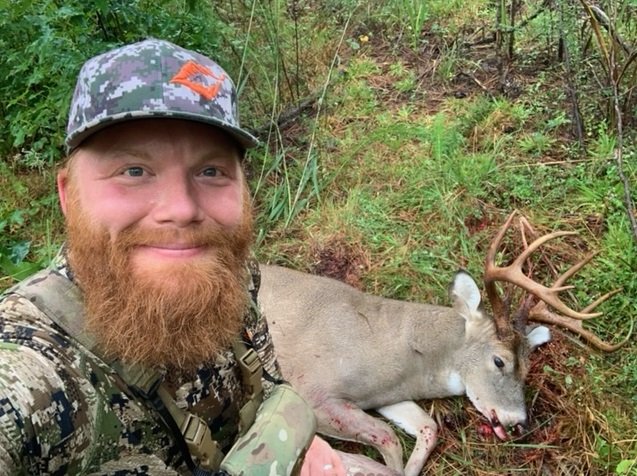 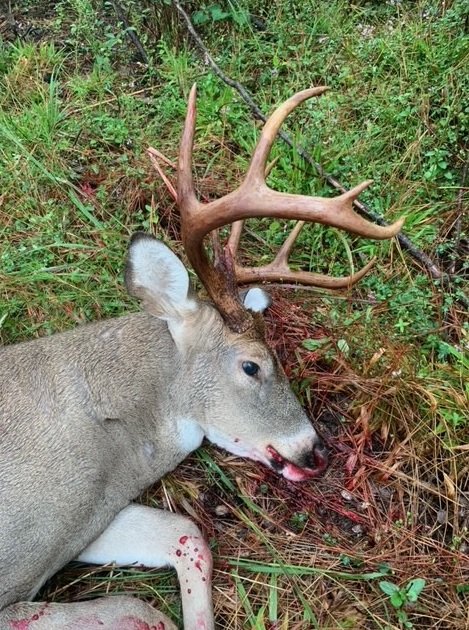 I don't know much about whitetails but that looks like a pretty awesome one! Congrats!

Nice write up and thanks for sharing, that’s a hell of a deer!
N

Heck yeah! A big whitetail from the ground with a bow is not easy. You’re clearly a very good hunter. Congrats on a great buck. He’d been doing a lot of rubbing by looks of his rack.

Nice job and congrats! I grew up in SC...that's a monster public land Carolina whitetail. Good luck w your mountain hunts, I was always curious to try that a bit there too but never got around to it before I moved out of state.

crock239 said:
Nice job and congrats! I grew up in SC...that's a monster public land Carolina whitetail. Good luck w your mountain hunts, I was always curious to try that a bit there too but never got around to it before I moved out of state.
Click to expand...

Thank you. I’m going to try to do it again before the season ends.
B

That’s a great buck and quite an accomplishment. Really enjoy ur YouTube videos also!

That's an awesome buck. Nice working getting it done on public.
P

Having grown up hunting in SC, I can fully appreciate your accomplishment. Well done!

Congrats, thanks for sharing!

I really like the looks of that deer. Very pretty capeand antlers. Good job!

PNWGator said:
Having grown up hunting in SC, I can fully appreciate your accomplishment. Well done!
Click to expand...

Thank you. I tried to write a story to explain the journey. There are definitely some big bucks around but killing them on public here is tough. It’s hard to explain the difference for people who have never experienced it. It’s a real challenge but I throughly enjoy it. I’ve turned down multiple opportunities to join good hunting clubs bc I want to hunt public.