Not around here, just about ever parcel of creek bottom and mesquite pasture, large or small, has a camper trailer cluster. We do not due to proximity to town and 3 of our 5 members being young family dads. I did go the trailer route for many seasons..looked forward to every friday evening getting to the lease and locking the gate behind me.

FlatlandHunter said:
I would say that deer camps are dying, at least ours is. I have voiced my concern to our camp and believe it’s partly due to not allowing new blood in. I got permission for a coworker to go with me in 2017 because everyone else bailed for out of state hunts or couldn’t be there for whatever reason. After securing permission I don’t know if there was a miscommunication or if unfortunately my Dad was pissed I did this and he stirred it up but I was not talked to by my Great Uncle much those 4 days. My coworker and I took our bucks and left.

My Dad keeps saying he doesn’t want to see it go away but refuses to want new people in camp. My Dad is already trying to control this Falls camp because there is a chance my cousin will bring his oldest and wants me to go the 2nd week with my son and him. There are places to sit for all and I told him it would be fine. My Dad is in his 70’s and is a control freak in my opinion.

Anyone else have this problem with the generation that is starting to age out and quit hunting?
Click to expand...

My family is like this. Super territorial and insulated about hunting - territory, tactics, etc. But then they turn around and complain about the lack of interest in the sport. Oh, the irony...

I was the only one at camp this year, no one else even came out once. Since the property is smaller I’ve limited the lease to one other besides me but usually have one or two guests out.
While it was nice in a way to have the solitude I did miss the company and the help of keeping the place up. I haven’t seen my two best friends since covid started. We use to have spring camp outs/machine gun shoots where 20-40 people would come camp out for a few nights. Not anymore.

I grew up in a Hunting "Club" Camp. 20 members paid dues to rent private land for weekend drive hunts. Drives are still very much legal in CA, We can use dogs, and we can get two buck only tags over the counter for an 8 week rifle season.

Things that are making this kind of club harder to exist are:

Committing 8 consecutive weekends and 1 day during the week to hunt as a group
Keeping hunting dogs and keeping them in shape in the off season
Out of state trophy season opportunities and limited PTO compete for time.
Landowners who are willing to have outsiders on their land during deer season
Kids travel sports schedules interfere
Competition from Predators
Diminishing physicality in people's day jobs makes this kind of hunting hard to be in shape for.
Lack of landowner incentives to create/improve habitat conducive to big game hunting
Air quality regulations that make prescribed burns nearly impossible.
G

Traditional deer camps are dying, but I don’t believe hunting is dead.
when I was growing up we got together as a family every year on opening pheasant weekend and deer season. Aunts, uncles, cousins, everyone. Pheasant camp died as the pheasant population did, deer hunting camp died as the cousins either didn’t continue to hunt or moved out of state for employment and the uncles who were half hearted didn’t care any more.
I met my wife in 2003. Our hunting camp was fading, mostly gone, but her family camp was in its hay day, 20-30 people. Lifelong long friends, cousins, aunts, uncles, neighbors and more. It was held together because my FIL owned or rented most of the land that was not public that we hunted on. Almost 20 years later we are still going strong, but the future is not bright. Of my wife’s family, her dad, myself and my wife are the only ones that are there annually. My wife’s brothers and sisters do not care to hunt but still come back to socialize if they can. One of my wife’s brothers is married to a hardcore vegan and he can’t even think about hunting. So it is my wife, my FIL, and myself from the family. The rest is friends or 2nd or 3rd cousins or even their kids. The worst part is much of the land that we hunt is being sold or a family member of the owner wants to hunt it even though it’s a small parcel. That has fragmented our land we hunt on.
Now comes the complicated part, my FIL has always only shot bucks himself, but He could care less what you shoot as long as it doesn’t go to waste. About 1/3 of our group is looking for a true Iowa trophy. Which is very possible where we hunt. 1/3 our group just wants to get a little meat for sausage. They don’t care if it’s a doe, a spike or a giant. and 1/3 could care less if they get a deer as long as they have fun, and are safe. THIS is tearing our group apart more than anything else IMO. The ones who want a trophy cuss the hunters who shoot a small buck and vice versa. The ones who don’t care and are just happy to be outside are indifferent. My FIL is trying to get out of it as he is 70 years old and doesn’t want the drama anymore, so it is starting to fall on me.
but since I get a say, my dad and brother are in my in laws hunting camp now. Awkward at times, but when it comes down to it if I can’t hunt with family anymore I’ll be done with deer camp too. 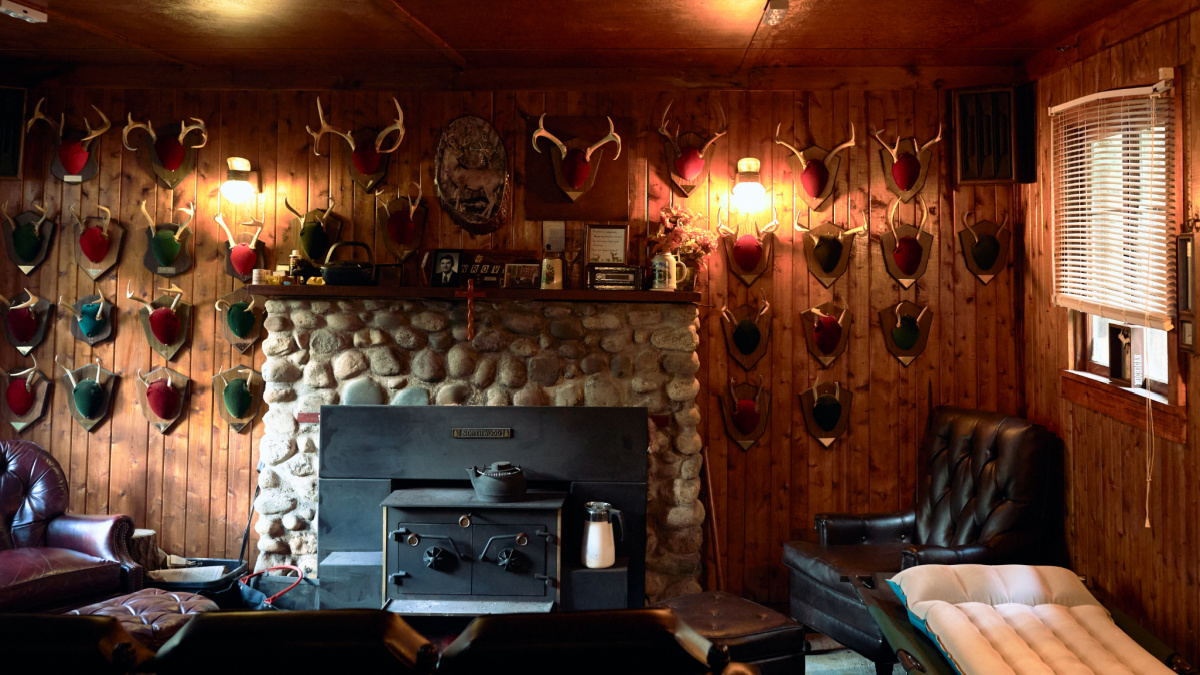 Tom Heberlein never missed a deer camp from 1973 through 2019, but COVID-19 concerns caused him to break that streak in November 2020. Heberlein, 75, stayed home rather than risk his health by confining himself with his buddies for five nights inside his northern Wisconsin shack along with a nine...

I've been wanting to figure out how to do 'deer camp' but i don't have any consistent hunting partners in my life. My only solid hunting partner left the state 5 years ago. Since then I've hunted with new people every year.

I've looked into buying a small chunk of wilderness but getting their is the problem and I only get 2 weeks of vacation with my job. as a family of 7 i don't get to spend the amount of dedicated hunting time I would like. Ah, oh well. Hopefully deer camps survive and I can make one to take my kids too!
J

it feels this way. but, why is it harder to draw a tag?

jeff_gibbons said:
it feels this way. but, why is it harder to draw a tag?
Click to expand...

Well I was talking about here around me. Here in MI I don't know of a single area that doesn't have far less camps than ever... I have lots of experience all over this state and can say that even the camps that are left have shrunk dramatically in size and many won't make it another 5 years.. Lots of places in the upper midwest are having the same experience from talk with friends and family members..

In Utah, family and friend camps are alive and well. Mini-cities, really.

Fellow Ute here... problem is the amount of hunters in deer season in Utah. It’s like Disneyland in the woods.

I was/am part of two camps in PA.
Golden acres was built in 50s by my grandfather and great grandfather on my father's side. They built it at the head of the valley on the land they owned which bordered 1000s of acres of a lumber company land. The camp eventually died due to many reasons.
1. The lumber company started leasing their land to a hunting club that we didn't join, but we still had 233 acres to hunt so not to big a deal.
2. My great grandmother had to move into town cause of age and living remote was just not safe anymore according to her two daughters. So my dad bought the land on the side of road the camp was on and they sold the house and rest of the land to the countys head game warden. In the deed my dad and I had lifetime rights to hunt all the land.
3. The game warden started giving us grief about all sorts of ridiculous stuff all the time. Like the time my dad shot a spring gobbler and it started flopping and trying to run so he ran up towards it and put another shot in him without putting his orange back on and the warden saw it and fined him for not having his orange on. So the camp slowly dwindled to just my dad and I since everyone got sick of dealing with the game warden. We were fed up to tho by this point. My dad finally got to the point it wasn't worth it anymore after the warden put a threatening note on my car about a treestand I hung and sold the camp and land. Still makes us both sad.

The other camp is camp deepwell and was built by my grandfather and great uncle in the 70s on the 400 acre farm. This camp is still going strong. My grandfather is still going strong also at 86 years old and still goes to camp early afternoon before the rest of the clan gets off work and waits for us to arrive by the warm fire and eating un-frosted sugar cookies Grandma sent with him. The rest of us get the frosted ones. My great uncle passed away about 10 years ago and some other have also passed on and some have moved or started their own camps over the years. We did take the year off staying at camp last year due to covid. First time since it was built 48 years ago.

Some of the best memories of my life were made in these camps and it is far and away what I miss most about home. As I get older I tend to really listen intently to the stories my grandfather tells at camp so I can remember them for the next generation of camp deepwellers.

The Dumbest Poacher of 2019

B
Drunk Bears by the Dozen