Anyone ever hunt Muskox

Don't know much about them, but they are pretty cool looking animals. 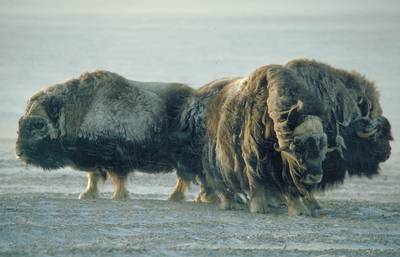 They would also make a great life size mount for the den or living room.

I hear they aren't a Hard animal to hunt.. Besides the Weather. I hear that the Extream weather can cause grief on a normal guy.

I have seen a mount done in the Snow. I'd love to get one Sometime. I love the mout picture. Thanx Elky !!!

PS< we should plan a hunt man

I have put in every year I could for a permit on the Haul Rd. If you guys make it up there next year, it is a good chance you will come across some. The most difficult thing about muskox is 1) reaching them and 2) trying not to kill more than one at the same time. Unless you can draw on the Haul Rd, you most likely are going to have to drop a few bucks into a guide. The guide is going to snow machine you out to the critters (if he can find them) in subzero temps. You'll be bundled in your arctic cold weather gear and duct tape probably asking yourself what the f' it is you are doing. From most people I speak with who have killed them, you only want to do it one time because there is very little of a challenge. I would agree though, I think they are a pretty cool animal. I think I would much rather draw a muskox tag over a bison tag any day. I hear the tablefare isn't bad either.

Here are a few pics I took back in 99. As you can see they aren't too worried about me. BTW, who is the ugly dude?

Thanks for the info on what they are like and thanks for the cool pictures. Looks like the one in the bottom picture lost all it's hair.