This fall was year number two in my long and prestigious hunting career, and I had high hopes of bringing home some meat after striking out last year. My brother-in-law and nephew did a marathon drive up from southern Utah to join my Father-in-law and myself for the week in North Central Washington. A Washington out of state tag is too rich for BIL's pocketbook, but for my 13 year old nephew, a tag only set him back $25. We spent Sunday setting up camp and getting organized, this would be home for the next handful of days.

I'm half a year shy of my 50th birthday, and I'm pretty sure that cast iron griddle is older than me. It was real nice to have, though.

First thing Monday morning I made a beeline up the slope across the creek from camp. The lower section had been recently logged. 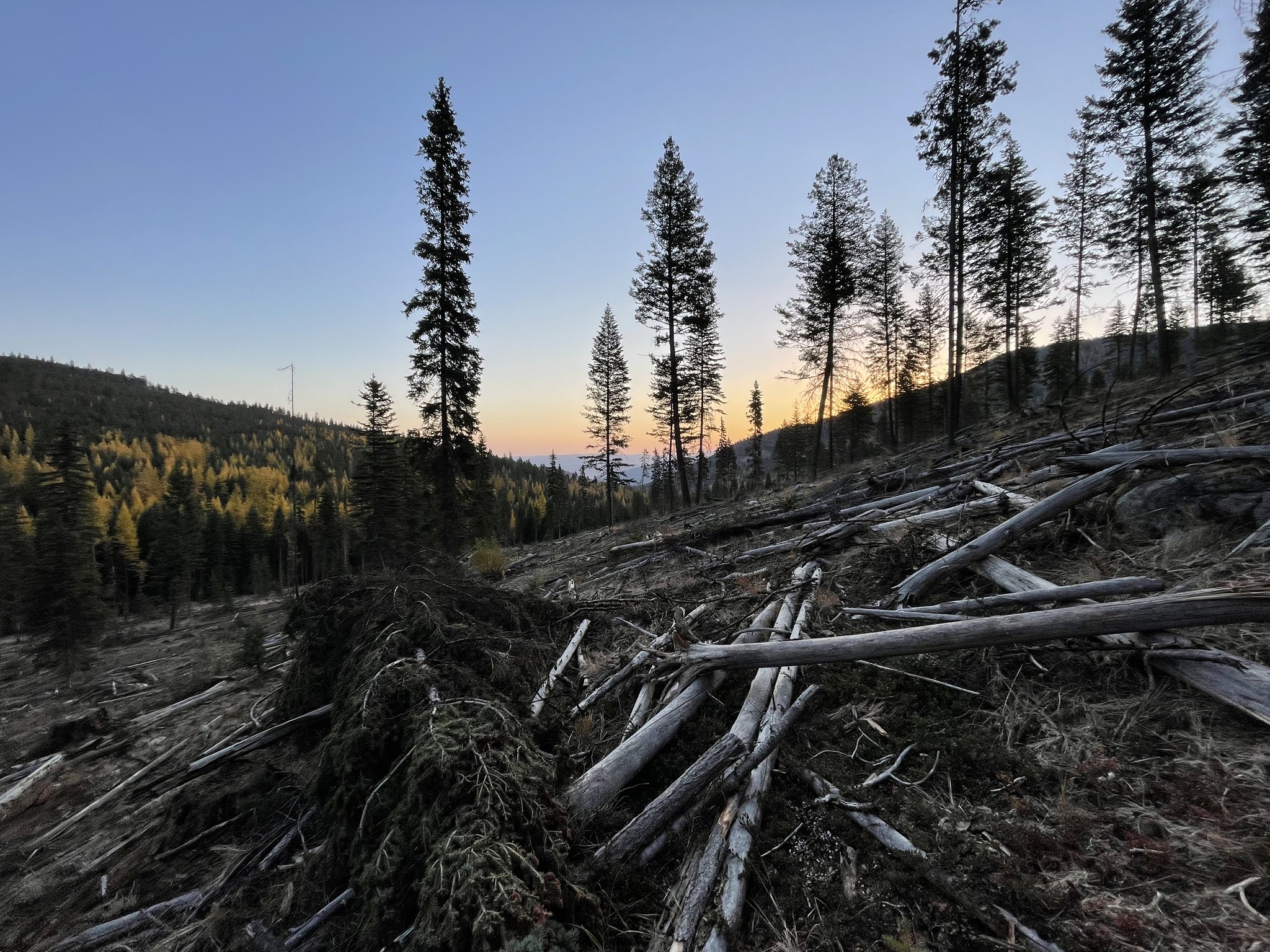 I had been eyeballing an old clearcut on google maps for a couple months and I really wanted to see if it was as tasty a hunk of land as it appeared to my novice eyes. Turns out the great Google in the sky is a bit outdated. Maybe an hour of hiking to get above it, only to discover that it's fully overgrown with 8-10 foot tall larches, so thick you'd struggle to walk through it, much less sit and glass over it. 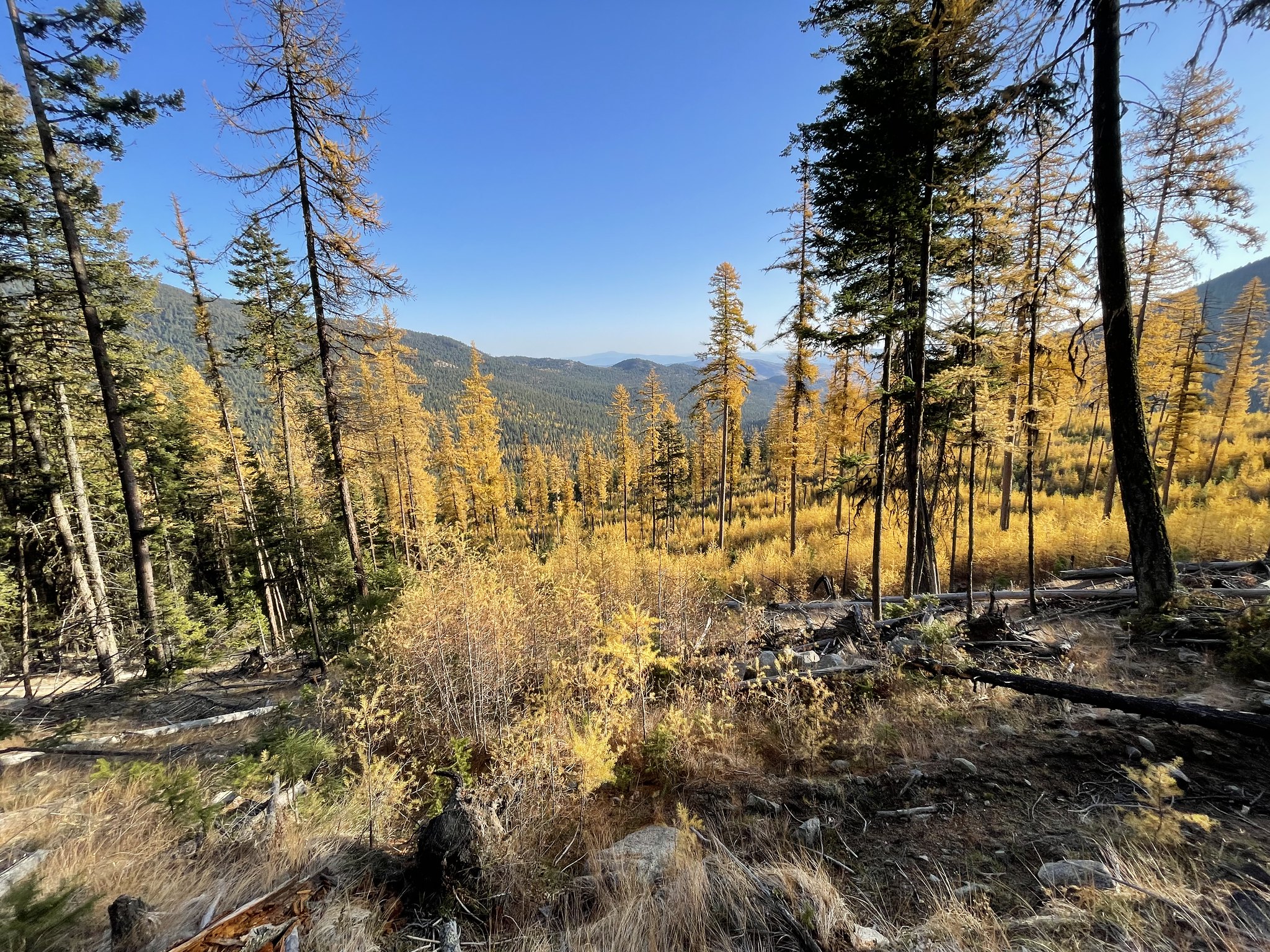 Signs of deer were seen along the way, and a possible flash of a white butt out of the corner of my eye through the trees. Nothing definite, though. That evening we took to forest roads for a bit to look for grouse. We stumbled upon this fella in the road. He only made it as far as the frying pan that night as an appetizer. My first grouse. 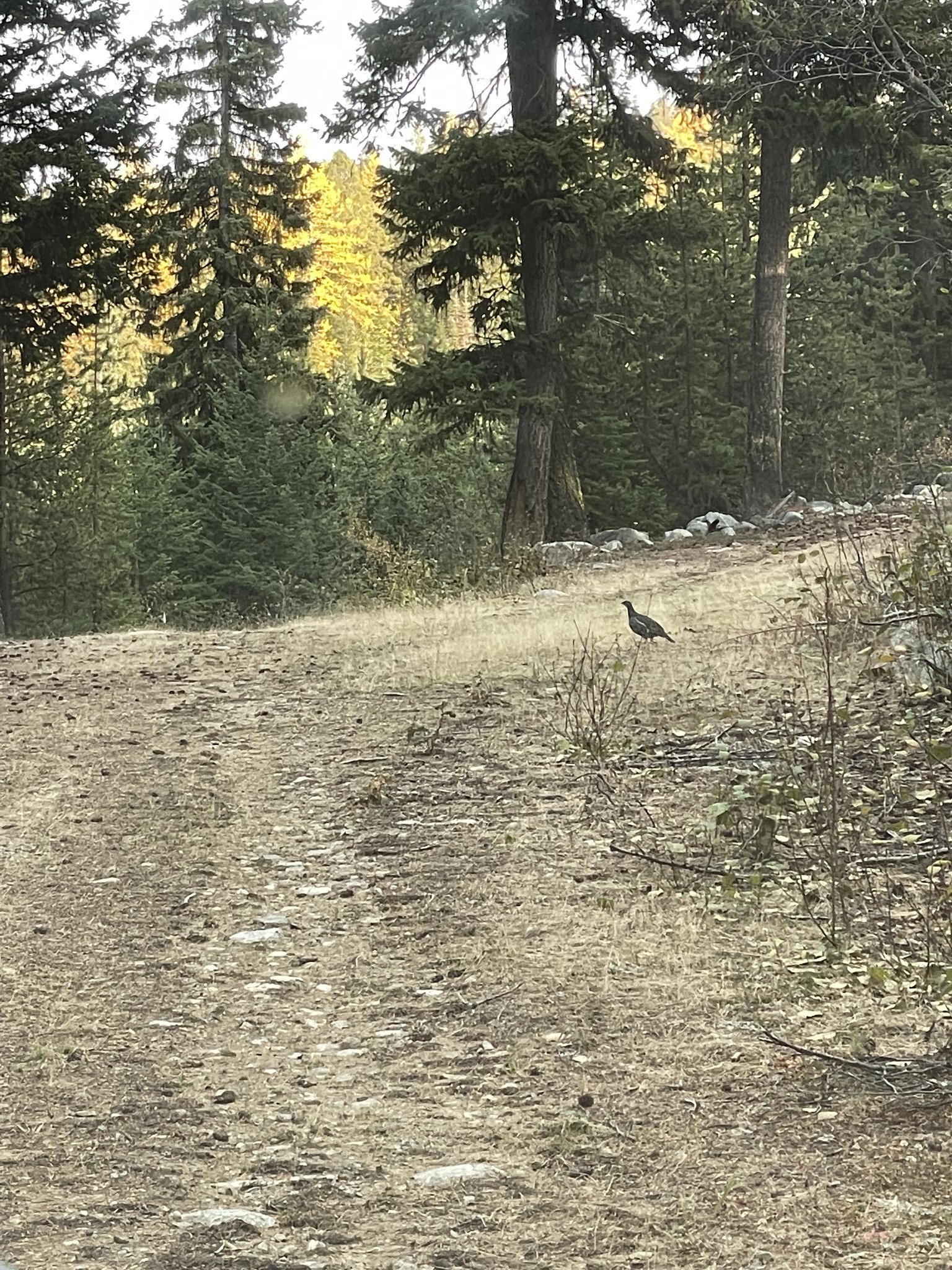 The next day we spent some time in a new area. We hung around and glassed until the sun was almost down. No deer sighted once again. Here began my often repeated question for the week. "How can there not be any deer in here?"

Fast forward the following couple days, I mostly spent them sneaking along old, disused roads like this one. Saw plenty of does, and even some buck tracks, but didn't catch sight of any antlers. 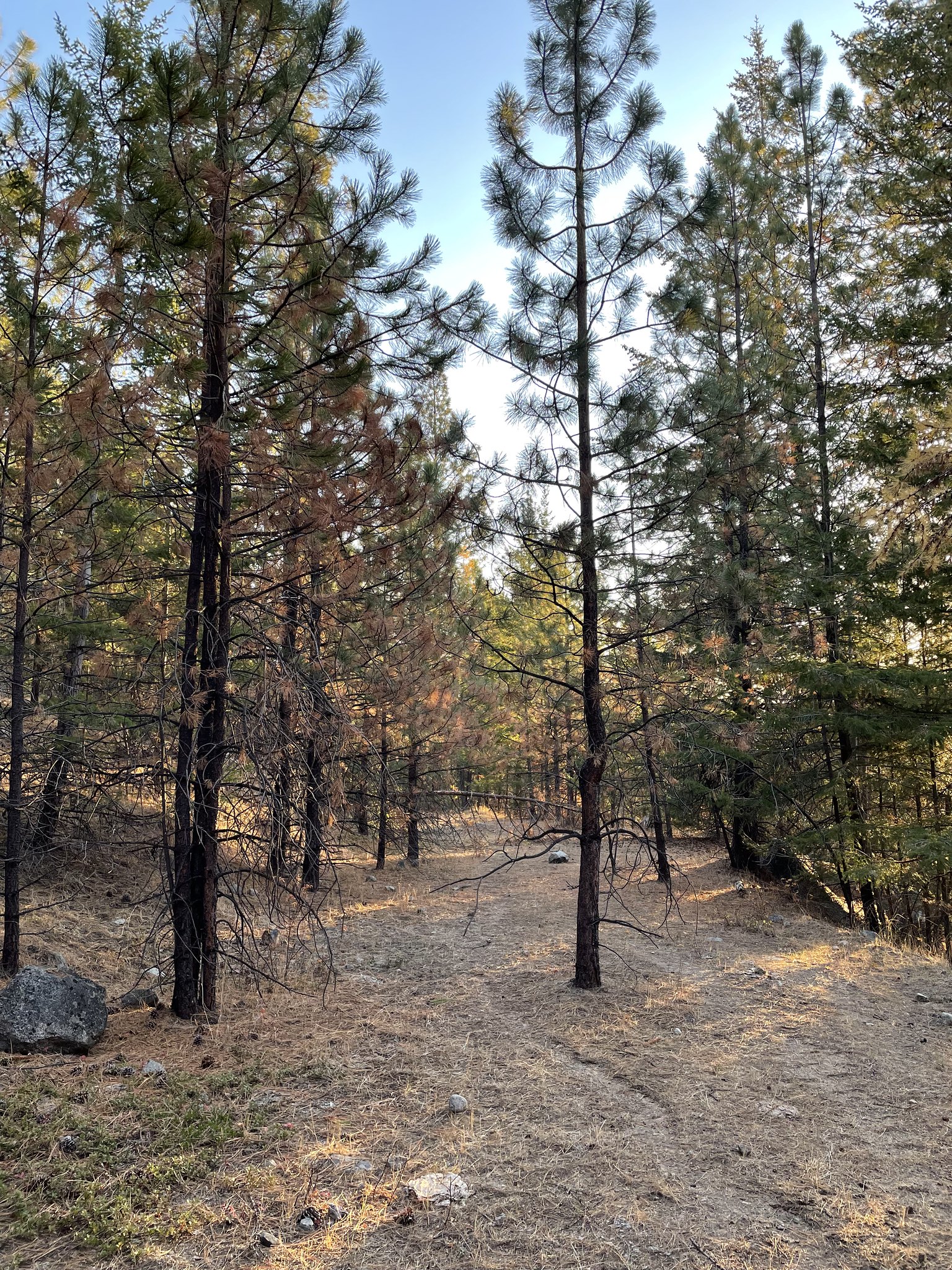 On the last full day of hunting, we tried yet another area. We started seeing does right away as we drove in. And almost as many hunters on the roads. I got dropped off along a road in the bottom of a draw and hiked up to a nice rock outcropping on a bench. I could just see a short section of the road below and a nice slope across the draw. I sat and glassed for maybe 30 minutes when all of a sudden out of nowhere a buck appears from the timber across from me, headed down toward the road. I stared long and hard through my binoculars. He was most definitely a solid two point, and as much as I stared, I just could not tell for sure if there was a needed third point in there somewhere. The buck crossed the road below me and went into a thick stand of trees. I hustled off to where I thought I could cut him off, assuming he was headed for a saddle on my side of the road. I could hear him crashing around in the trees below me, and then he went silent. Hindsight being 20/20, I should have gone down looking for him, but I convinced myself that he was a two point and not legal anyway. As I stood there on the rocks a bit longer, a car came up the road and stopped below. I never saw anyone get out, but I don't know for sure they didn't. I heard a shot (This was maybe 80 yards below me) and then the car pulled off the road and a guy got out and walked toward the trees and out of sight. A second shot. At this point I didn't know where he was, or where he was shooting, so I quickly put a ridge between me and him and started climbing back down to the road.

I made my way back to that vehicle and the guy was sitting inside notching his tag. I asked him what he got, he said the buck had been bedded right there by the road. Said it had a very small third point. It was a couple hundred yards away when I spotted it, so not surprised I couldn't tell for sure. So some dude got to notch his tag and I have a year to replay my decision to not go investigate further when I lost sight of that buck. Ah well.

The rest of the week was uneventful, aside from torrential rains the last night we were there, resulting in much of our camp getting soaked. Still, I did lots of hiking-got to see lots of country that, at least to my eye, looked like great terrain to find a buck. I learned a lot regardless, and I look forward to trying again next year. And we had a good time chasing grouse as well.

Really good to learn that you enjoyed the trip. That's why we call it "hunting" and not "shooting"!

You camp in style.

It’s like I am looking in a mirror. I set up my wall tent this year for the entire Idaho general season. its a new tent. Only been used two trips prior, I loved it. Came home empty handed. As usual

It is indeed. Harvest or no, I am really enjoying just being out there and learning more each trip.

Well I am a man of superior taste...

Or at least I am a man with a father-in-law who has been assembling a hunting camp for five decades.

fleabagmatt said:
The next day we spent some time in a new area. We hung around and glassed until the sun was almost down. No deer sighted once again. Here began my often repeated question for the week. "How can there not be any deer in here?"
Click to expand...

The answer is pretty self explanatory... because this is WA.

Join the luckless club, but I've got way more years into it than you!

You definitely have a nice camp setup. Keep at it. When it all comes together, it will be worth it.
M

I envy your camp setup! My fiancé and I car camp in a Subaru Outback.

That’s a hard spot to learn to hunt. I would consider myself a good hunter. I made it a point to start hunting heavy timber a decade ago and it was years before I could find consistent success.
Stick with it and you will get there.

That's one heck of a tent setup, nice
You must log in or register to reply here.