An old monarch has fallen

As some of you may know I drew a mule deer tag in Saskatchewan and had full intentions of looking for a 190+. Anyways my hunt started Friday and the first evening I passed a tall 3x4 a tall 3x3 and a wide buck I ended up shooting tonight. Those were the only mature bucks I saw that night.


The next day we covered lots of ground. the temp had really dropped overnight it was -35 with the wind and we had got a few inches of snow. I had High hopes this would kick the mature bucks into rut as the three I had seen the night before were not rutting yet. We saw lots of deer but nothing mature or big that day.

sunday And Monday were repeats very cold which had the deer moving pretty good and finally had a few mature bucks starting to move.

Today my standards had dropped to a mature buck. I’m blaming hard winter and maybe too many deer tags there was just not many mature bucks around this year. The mature Mulies I saw in the last 4.5 days of dark to dark hunting could be counted on one hand. And The few mature bucks I did see were missing forks or weak forks. The drought at the beginning of summer had not helped this im sure.

around lunch today I spied a herd of Mulies with a tall 4x4 with tiny crab claw fronts but very tall. Probably 18-20” g2’s. They were wild and busted me quickly but I was able to get ahead of them. Due to some indeciveness I never got a shot at him. He was running straight away the entire time but had his smaller 180” non typicalbuddy come trotting by at about 150 yards. I passed hoping he will survive the last few days of seaosn he needs one more year. After spending a couple hours trying to relocate the tall buck with No luck I was working my way out of the pasture when I spotted this guy with his herd of does. Quickly parked the truck made a half mile sneak and closed in to 300 yards. I created the hill got prone and waited for him to stand. He could see me and all his does were up but he wouldn’t stand. Finally after a few minutes he stood up and one well placed shot dropped him immediately.

it was a very memorable hunt. I hunted hard and took one of the best bucks I saw. Hopefully we gets some easy winters to help rebuild the herd. There is lots of nice up and comer bucks out there. And I know some of you guys will think o was crazy to pass this buck Friday night lol.I ended up shooting him about 300 yards from where I originally saw him. Don’t know where he was hiding for the last few days. Pictures aren’t the best as I was by myself as per usual 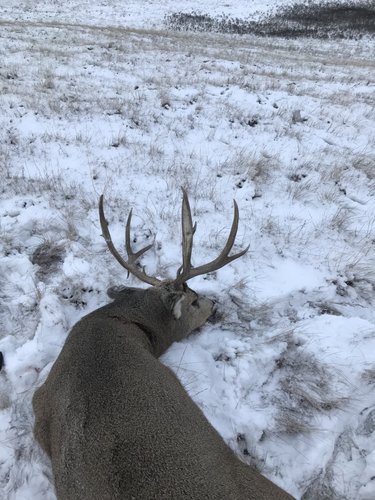 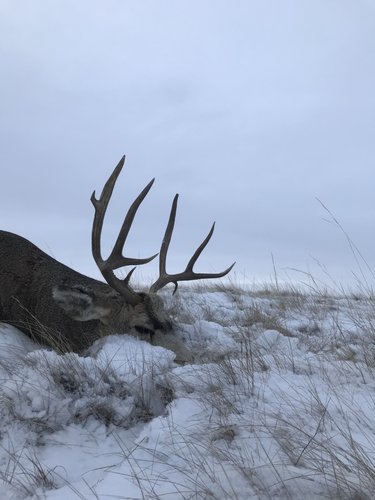 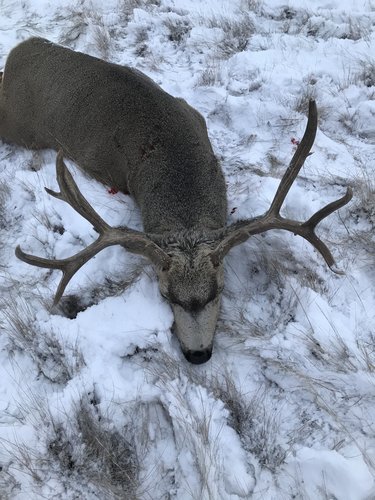 Nice, I like big 3 pts.
How much do you think he weighed?
B

That thing has character, congrats!
S

wytex said:
Nice, I like big 3 pts.
How much do you think he weighed?
Click to expand...

I’ll let you know when I butcher. The whitetail i shot a couple weeks back the quarters weighed 160 and this guy is a bit bigger. Guessing his quarters will dress 180-200

How many freezers you got? Hahaha nice buck congrats!

Seems plenty mature to me. Congrats.

EYJONAS! said:
How many freezers you got? Hahaha nice buck congrats!
Click to expand...

That’s a tank of an old buck. Congratulations.

Congratulations! Man, you have had a heck of a season!
You must log in or register to reply here.