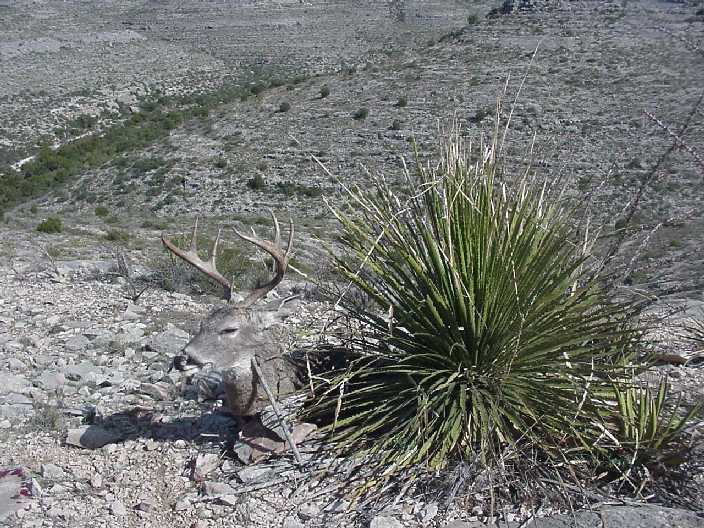 I shot him from that cedar/juniper bush down on the shoulder by the end of his right antler. Other hunters push them out of that bottom draw with all the cover down there, it goes to the Pecos river in less than a mile. The deer like getting up on that shoulder where I shot him from, that's my theory and it worked yesterday. He was near the top, I shot and hit him, but not real well, then he went up, and I shot him again, siloetted standing up top. I laid down for that shot and it was a good one.

They have escaped me before, when I was on top, by running down into that draw. This time, I came around the point on the left and cut off an escape route. It was harder for them to escape going up and I surprised him enough to get him.

If you look at the right of that cactus bush he is next too, you can see some small bites from animals eating on them.

He looks like he may not have legs because I carried them out and brought the camera back. This lease is hard hunting, but if I stick at it, it pays off. I've seen turkey on that shoulder too, but its been months ago now. I've also seen javalina within half a mile or so of where this buck was.

This hunting lease is a little north of Langtry, Texas on the edge of the Pecos river. Judge Roy Bean used to be the only law west of the Pecos when he established Langtry, there's a small museum there now and his old courthouse/home/bar where he ran things from back then.

Here I am back at camp, with my "delux" camper trailer and "super delux" outhouse for cold windy days or when women are in camp. Our season is Oct. for archer, then Nov. and Dec. for general, including rifle, pistol, archery, muzzleloader. Then some of Jan. for just muzzleloader or just does and spikes. We get to hunt it all so we often set up semi-permanent camps, like here. 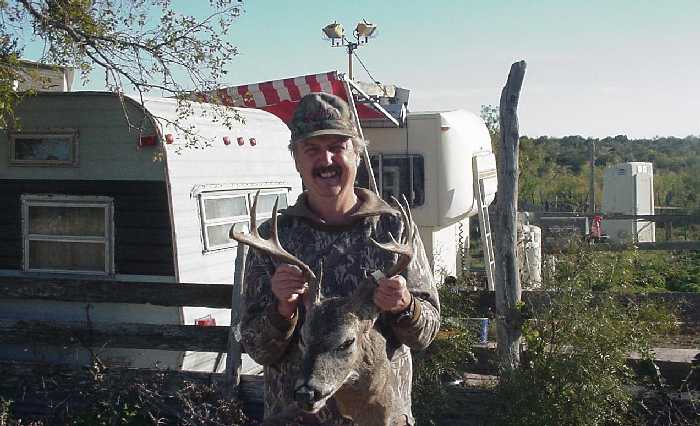 Now that is a dandy deer Tom...Thanks for the great story and pics...It was a little large, but I suppose Del will fix that soon enough..Thanks again and major congrats..
I

Nice buck! Thanks for the picture!
E

Nice buck, Tom! Cool country...looks more like muley country. Thanks for the story!

Nice buck and story Tom.Thanks for sharin it all with us.Nice hat too.
S

damn thats some pretty open scrub for WT! i would have overlooked it myself for sure
1

Congrats!!! I'd like to hunt deer in country that open someday. In IN we were lucky to see more than 100yds.
D


I hope you didnt mind , but i resized you pics so you didnt have to scroll sideways to read your story and see the whole pic... you can download/save them by right clicking on the pic and then put them into your folder in broom speed.

then just go into your post and edit the links again.... or you can leave them the way they are

I just know Del, could fix this delima..Thanks Del...

Thank you Del. I found a resize on my photo edit, let see if it works this way. Here's a view of the Pecos river from the top where that draw starts in the bottom of the picture with the deer. This just one ridge west from where I got the deer.

Jude
You must log in or register to reply here.

Thought that I may be in the news…