Anyone who's got a 1/4 MOA hunting rifle in MN and wants to earn some $ by proving it I'd be happy to pay ya.. If you pay me when it doesn't shoot 1/4 MOA on command.
B

Wind Gypsy said:
Anyone who's got a 1/4 MOA hunting rifle in MN and wants to earn some $ by proving it I'd be happy to pay ya.. If you pay me when it doesn't shoot 1/4 MOA on command.
Click to expand...

I'm with you. I feel like the majority of people who claim 1/4 moa are either mistakenly measuring the closest outside edge of each bullet hole or lying. Not saying it isn't possible but not for as many people who claim it.
W

Benjamins said:
I'm with you. I feel like the majority of people who claim 1/4 moa are either mistakenly measuring the closest outside edge of each bullet hole or lying. Not saying it isn't possible but not for as many people who claim it.
Click to expand...

Or they shot one 1/4 MOA 3 shot group one time and pretend that is the rifle's capability and every other group they "didn't do their part".

I wouldn't be that surprised if someone has a custom 10# 6br that is a one holer but that's kind of out of the norm for a hunting rifle.

Wind Gypsy said:
Anyone who's got a 1/4 MOA hunting rifle in MN and wants to earn some $ by proving it I'd be happy to pay ya.. If you pay me when it doesn't shoot 1/4 MOA on command.
Click to expand...

What part of Minnesota…

Not because I’m claiming to have a 1/4 min gun, but because the topic has been put out to go shootin’…

VikingsGuy said:
MOA is like grade inflation. 10 years ago folks all bragged on 1 MOA, 5 years ago it was sub 1MOA, 2 years ago it was half MOA, and now quarter MOA gets thrown out routinely.
Click to expand...

Hard to disagree with that. When did MOA even become mainstream in the hunting world? 15 years ago?
W

Farmerj said:
What part of Minnesota…

Not because I’m claiming to have a 1/4 min gun, but because the topic has been put out to go shootin’…
Click to expand...

VikingsGuy said:
I don't doubt YOU do. But MOA is like grade inflation. 10 years ago folks all bragged on 1 MOA, 5 years ago it was sub 1MOA, 2 years ago it was half MOA, and now quarter MOA gets thrown out routinely. I know rifles and ammo have gotten better, but I just don't buy the "grade inflation". To me, believable MOA is the average of five 5-shot groups. No shots are removed unless you legit called flier at the time of trigger pull. No "the third round is always a flier so I removed it" bs. My guess is quarter MOA factory ammo, factory rifle claims would be quite rare under decent rigor. With .30cal bullets you are talking ragged holes, not even cloverleaves, at 100yds.
Click to expand...

I totally agree. The majority of posted groups are clearly measured incorrectly. Most people talking about how good their gun shoots are talking about he best group the rifle ever shot. Most couldn’t repeat it if their life depended on it.(I couldn’t repeat my best group, but not many could) Three shot groups aint five shot groups. Nine out of ten fliers aint fliers, they’re gonna show up in most groups said person shoots with that rifle. I believe the world record agg(average of five, five shot groups) is .1338” fired in 2013, and the previous record was .1500” fired in 1994, so literally no one has ever had 1/8MOA rifle if we’re going to go with the average of what a rifle can do.

Not that many years ago a .250” agg would give you a really good chance of winning a benchrest match, perhaps even nationals. Today it would still be a good showing, and still wins occasionally. The most recent registered match at my local club was won by a benchrest hall of fame member with a grand agg of .2449” and second place, another benchrest hall of fame member had a grand agg of .2605”. The “grand agg” is just the average of all the aggs in the whole shoot, in this case five, 5-shot groups at 100yds and 200yds in two different classes. They divide the group measurement at 200yds by two, so if a group measured .500” center to center at 200yds, it would go down as .250” when calculating the agg. Even though benchrest aggs have shrunk considerably over the years, at a registered match in 2021, first place barely beat .250”, second place was over .250” and both were hall of fame members.

There are some modern cartridges for which decent factory ammo has been slightly baked in(6BR Norma, 6.5-284Norma, 6.5x47Lapua, 6.5CM, 6CM, 338Lapua come to mind). So I do think that factory rifle, factory ammo, and some of the newer cartridges, have absolutely improved, and that we should expect to see off the counter rifle/ammo combinations resulting quite a bit better accuracy than in the past, but still, not .250” center to center, on average(occasionally yes, average of all groups, or a even a handful of consecutive groups, no I don’t thing so). Also, I’m not sure that any large manufacturer has actually built a production rifle more accurate from the factory than a 40XBR or Sako Benchrest, but in neither case would I say factory ammo would result in peak accuracy.

My “1/4 MOA” hunting rifle might not agg .250” through a single match, then again, it just might. It wouldn’t qualify for the LV class. It’s very sensitive to gun handling, so I’d have to bolt a 3” plate to the fore end to feel like I was going to get through 25 shots without blowing the whole thing up with one tiny twitch, and no that’s not how I hunt with it, but hey, it might shoot even better. Also, although it is a “hunting rifle”, because it was not built to fit into any classification in any competition, and I built it to hunt with, and do hunt with it, it is not really your standard do it all hunting rifle. I built it as a pronghorn gun with no regard to weight. I have packed it through the mountains, even racking up 23mi one day in a wilderness unit going through a NASTY burn full of deadfall, BUT it’s too heavy for that. I never intended to do that with it, and just ended up liking the thing so much that I didn’t want to put it down. I’ve not shot many five shot groups with it. It’s not a cartridge that is likely to have really long barrel life, so I don’t see any reason to put too many extra rounds down it. Check zero, make sure it’s still shooting, dial to 500, shoot, dial back to 200 and make sure it’s still zeroed, ok let’s call that good and go hunting. You can be the judge of whether it’s 1/4 MOA or not. 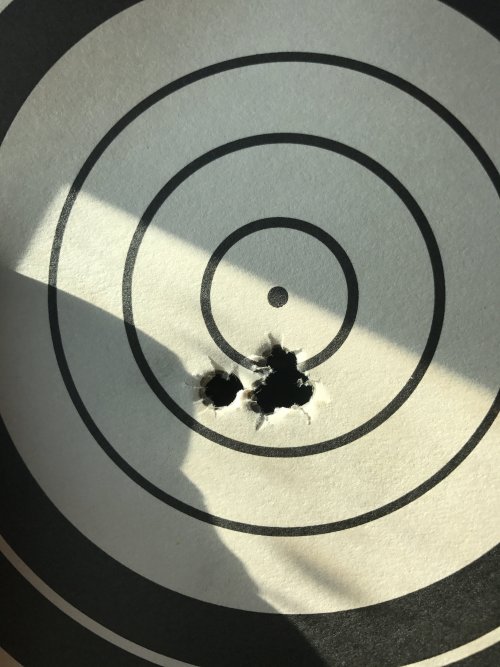 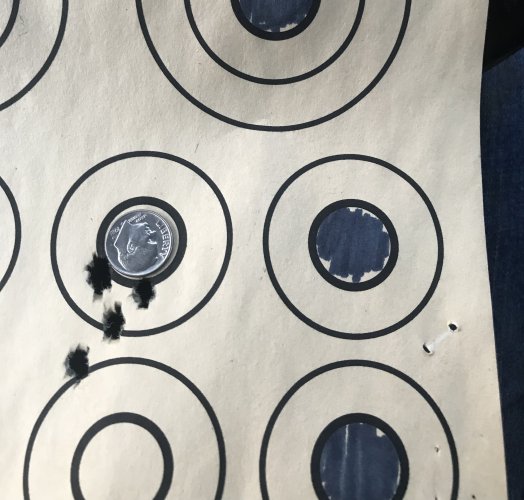 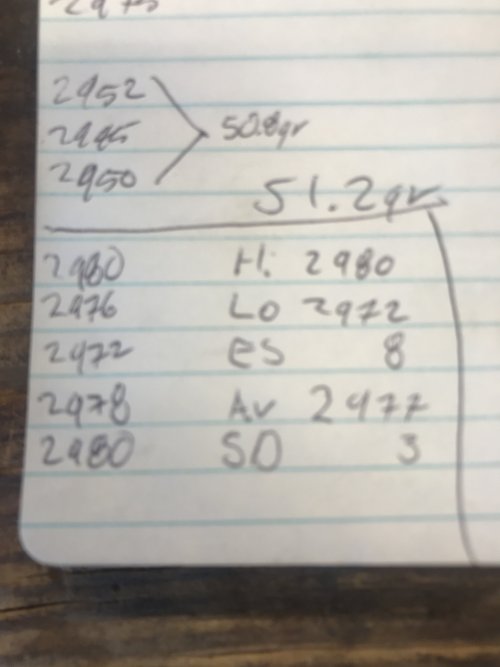 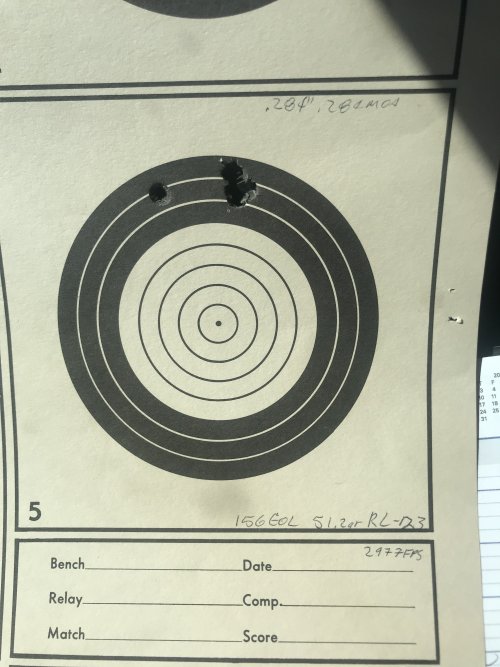 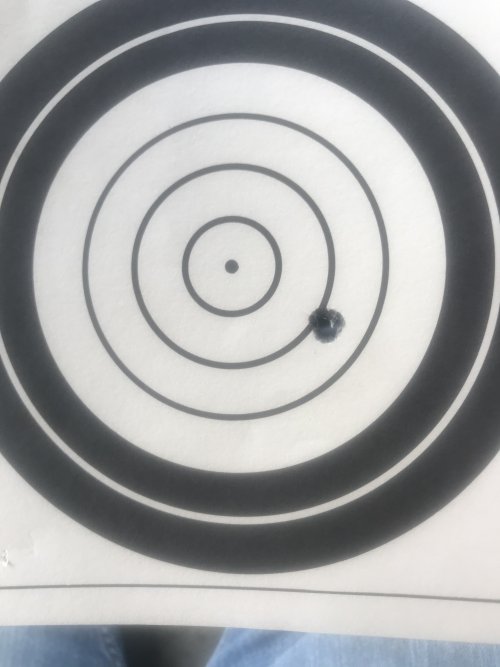 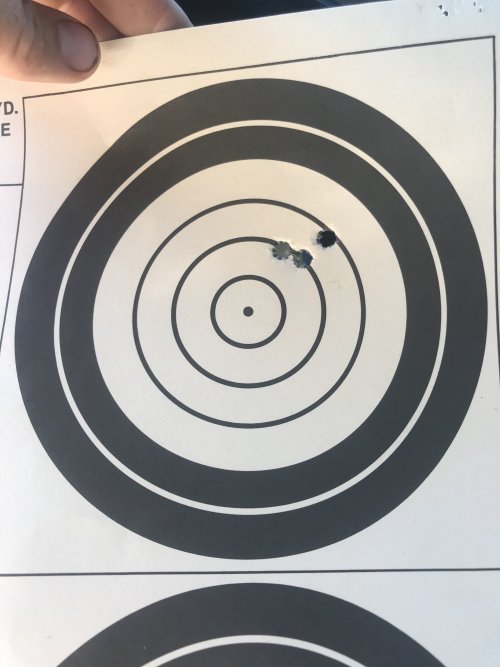 Followed that with three 130s, which is what I had wanted to hunt with, but I already had some 140s loaded. Grouping well, but moving higher. 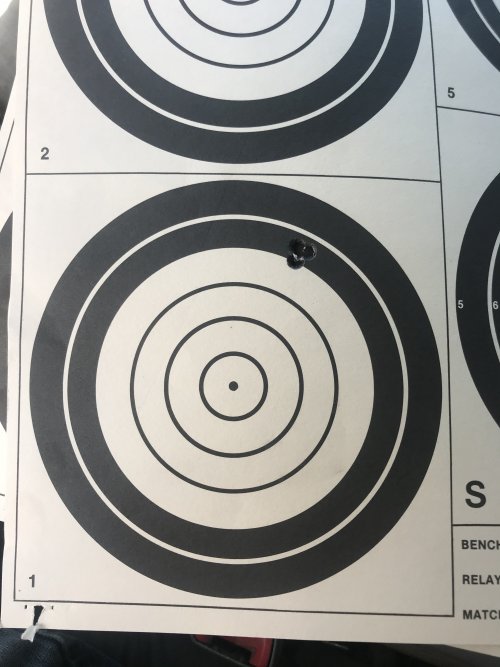 I dialed down and left. First shot was too far left, so I dialed right and shot three more. 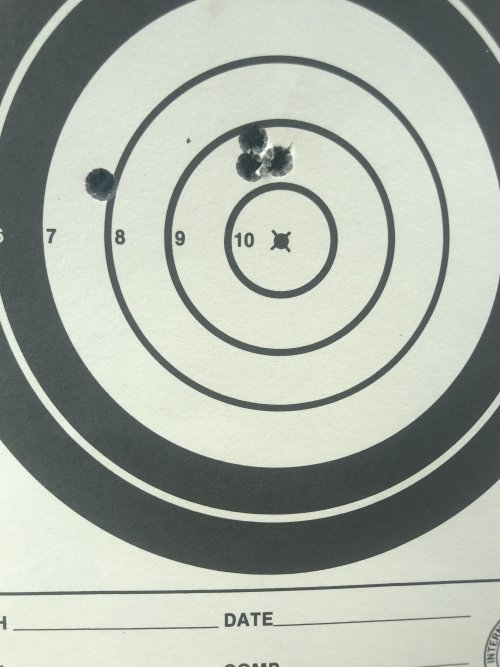 Dialed down and fired three more. Looks good to me. 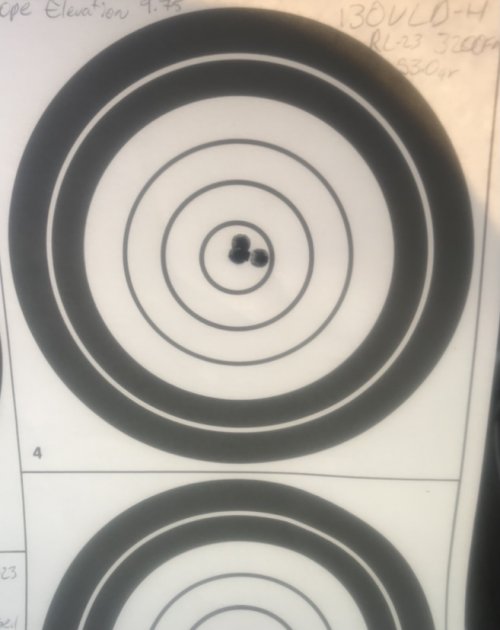 2020, post pronghorn, dialed to known zero with 156s and shot three at 200yds. Looks like cleaning the barrel wouldn’t hurt anything. 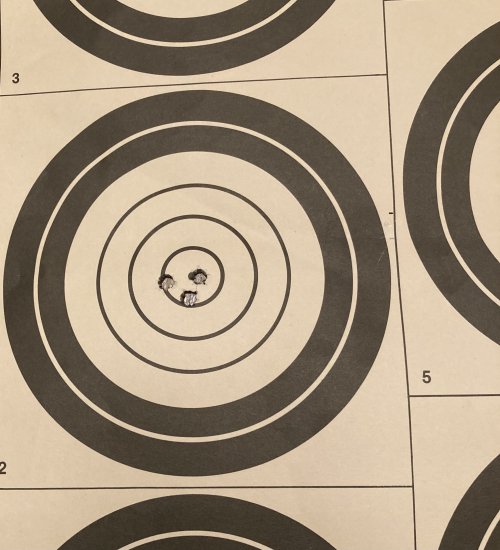 If my passion was punching holes in paper, no doubt I'd be a fan of the 6.5 Creedmor.

However I bought my rifle in 1990 with the idea that I wanted to be able to kill anything with confidence in the Lower 48 with factory ammo with one rifle. I have not yet pushed the upper end of that with larger or dangerous game beyond 6 Rocky Mountain Elk. I've never felt undergunned yet. It is not a fur harvesting gun or for pleasure shooting. If that need changes I'll look at a different caliber.

tzone said:
My pick would be 6.5 because it's a hellova lot easier to find ammo.
Click to expand...

Lol, 6.5 Creedmoor is about the hardest ammo to find right now.
F

To the OP : If the choice is locked in to only those two rounds, then I would vote for the .300 Win Mag. I would also suggest a ported barrel in a light rifle.
T

Addicting said:
Lol, 6.5 Creedmoor is about the hardest ammo to find right now.
Click to expand...

Shit I find it everywhere I look. Not as easy as 350 legend, but pretty damn common.
D

Somehow I have the feeling there are more 1/4" rifles than there are 1/4" shooter's! Shooting 1/4" groups on a reg basis is done by more skill than most of us have. I shot a .111" 100 yd group with my 25-06 one time. Normally I shoot it right at and just under 3/4" and then from a bench using bags! I am not a 1/4" shooter!
Oh and I measure with a wood ruler generally. Sometime I simply measure center to center and eyeball the center's! To measure my .111" group I used my dial caliper's and eyeballed outside to outside and subtracted one bullet dia.
Last edited: Jan 2, 2022

tzone said:
Shit I find it everywhere I look. Not as easy as 350 legend, but pretty damn common.
Click to expand...

It’s regional, during this pandemic I helped a lot of guys with ammo and components. Being a shotgun area we had a ton of rifle stuff and due to some aggressive purchase limit rules being set from the beginning. It helped it managed to last. I can still buy most any powder or and have lots of factory ammo options. Primers are still spotty but lately there is always some CCI at one store. The ones I could never find were anything 6.5 Creedmoor or 280ai.

In all honesty, I don’t really know if my 6.5 and 300 are 1/4 inch rifles. Why? I realize I may have not been measuring correctly. They both have shot “clovers,” multiple times. As a follower of science, I have failed you miserably. 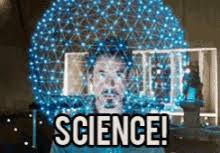 Pretty much this^^^^^^
and I believe the CM Mesa is much more an all-around rifle not really meeting the definition of mountain rifle.

The 300 will do everything you need in NA, the 6.5 doesn’t have the same margin of error. I wish I would have bought a semi custom 300 from the start and saved thousands on multiple guns.
D

I wouldn't own another mag rifle except for a 22 mag. But how do you compare a cartridge with avaliable bullet's up to 140gr to a cartridge with bullet's to over 200gr. They still make 220gr bullet's for the 300? Apples and oranges. Silly to think the 6.5 won't kill an elk, certainly will if you do your part. I've killed elk with the 7mm Mag years ago, 6.5x06 and 30-06. All of them work! Pretty sure a 6.5CM and 300 mag would also! There's something beside bullet weight you'll get with the 300 Mag, recoil. I'm a woose and gave up shooting magnums. When I had my 7mm and 338 mags, I had to shoot quite a bit just to manage the recoil of them.
D

BucksnDucks said:
Pretty much this^^^^^^
and I believe the CM Mesa is much more an all-around rifle not really meeting the definition of mountain rifle.
Click to expand...