Taking my wife to WY for our first ever rifle hunt for cow elk in December. Plan to use our .260 that we have used for antelope. I assume I should use a heavier bullet (140 gr. ?) and work on a new load ? Currently using Hornady 129 gr SP Interlock with H4350 which really loves antelope Our gun is a Rem. Model Seven. I see in the Hornady Manual 4 options for 140 gr. bullets.
Any suggestions on a different load I should try? I am new to reloading as well, but I loved dialing in the right combo for antelope. THANKS for any advise.
F

Norma makes a 156 gr 6.5mm Bullet design for moose and I would choose that or a Barnes TTSX/127 gr LRX. On the Barnes copper solids remember they act much heavier than they are usually. H4350 is a hard powder to beat for this sort of application. If you go the Barnes route use thier load data and it will treat you right.

Looking at Hornady's home page, they show the 129 gr Interbond as being suspended, otherwise I would just suggest using those. Nosler offers a 130 AB that you could toss out at around 2700fps w/o too much ta-do. That would give you 1500 ft lbs out to 250yds and a PBR of 6" out to 270 yds.

Whatever you decide on.....POST PIC'S and let us see the adventure, elk or no elk.
R

Minnesotahunter, do you have a picture of that accubond from your bear? If I remember right it looked like it opened perfectly.

Randy11 said:
Minnesotahunter, do you have a picture of that accubond from your bear? If I remember right it looked like it opened perfectly.
Click to expand...

I don't with me. I am out of town for work at the moment, but when I get back I will post it up.

The bear was quartering away, and uphill. It impacted breaking the 3rd rib behind the onside shoulder, opened perfectly, and ended up just under the skin, right in front of the offside shoulder. It was about a 6ft boar. I would be comfortable shooting an elk with this load for sure.

I did find some 6.5mm/140grn Accubonds, that I am planning to work into my "go to" round for this rifle, just for a little extra penetration on elk.
R

I get leery of Barnes in those small calibers, especially at low MV.

I get leery of Barnes in those small calibers, especially at low MV.

My thought on them is you won't have enough muzzle energy before they stop opening on elk sized game.
1

Yeah, but we're all human when it comes to shooting.

Really little to gain by upping 10 grains. You may run into issues with stabilizing the bullet as you increase weight and decrease velocity with the standard rate of twist. I had issues with my Remington and 140gr bullets. I shoot 100, 120 or 130s in it with zero issues on accuracy. I tried a couple different 140s and the accuracy was terrible. YMMV.

The bullet combo you have now would work just fine, and one I wouldn't be afraid to use on an elk. I've shot a pile of Accubonds in many rifles/calibers/critters and they don't really perform any better/worse than a cup and core bullet at moderate velocities.

Thanks for the insight Bambi. I have not started working loads for the 140s, but I might try just to see what it does. Do you recall what the twist was on your Remington? I did a 1 in 8" on mine. Did you find any bullets you thought performed better out of the .260? I have considered Scirocco 2s, TTSXs, and LRXs as well.

If the 140s don't pan out, it is no sweat off my back as the 130s seem to perform really well, and I would have no reservation shooting one at an elk.

Another vote for using your current load! More important is get her out and practice. Practice from various shooting positions. Good luck!

MinnesotaHunter said:
Do you recall what the twist was on your Remington?
Click to expand...

Did you find any bullets you thought performed better out of the .260?
Click to expand...

Can't say that I've really given it a true test on big animals. Never saw one walk away after taking a slug of any sort, if that matters?

I killed probably a dozen deer and a couple antelope with it. Most of the deer were with 120gr Ballistic tips, or 120gr Sierras. Bang, flop every time, I'd say half exited. With the 100gr, none exited, and none took a step after either. I took a couple with 130 Accubonds (current load) and it will be hunting caribou this fall.

I shot a bunch of the 129 interlocks as well as interbonds at paper. The interbonds sucked for accuracy for me in a couple different rifles and I haven't used them since. I didn't kill anything with either though.

I also shot a couple bucks with 140 Sierras in factory Federal, which shot ok, or good enough for close(er) ranges I hunted. I can't remember why I shot factory... I think I wanted brass as it was hard to find at the time?

As an aside, my dad and cousin have taken a fair number of bull elk with a 6.5 Sweed. My dad took a couple whopper bulls with his, and that was back in the day of "crappy" bullets. They were 160gr though... probably could shoot endways through an elk with one.
P

While I'm not shooting a .260 I am shooting a relative in the swede. I would highly recommend looking at the GMX bullet. And of that I would look at the 120's. On deer and antelope I have have 200 yard clean pass throughs. I actually passed through both shoulders of a 200lb buck this last fall, and when I inquried with Hornady about an elk load they said stick with the 120's since I'm am shooting them so well.. PS great caliber too
S

On a cow elk, the load you have will work just fine. One in the lungs will do it every time. The .260 outperforms its paper numbers. If you feel the urge to change, then you cannot go wrong with Partitions and Accubonds. In my 7 mags the Partitions, Accubonds and Interlocks all shoot pretty close with the same load of powder.

I would bet that your gun will shoot 140s very well.
2

Flatland Crusoe said:
This 6mm one opened pretty well for me at 2000 FPS.

My thought on them is you won't have enough muzzle energy before they stop opening on elk sized game.
Click to expand...

You're right I'm an idiot and I don't know what I'm talking about.

How many elk have you tracked around the mountains?

MinnesotaHunter said:
I don't with me. I am out of town for work at the moment, but when I get back I will post it up.

The bear was quartering away, and uphill. It impacted breaking the 3rd rib behind the onside shoulder, opened perfectly, and ended up just under the skin, right in front of the offside shoulder. It was about a 6ft boar. I would be comfortable shooting an elk with this load for sure.
Click to expand...

As promised. The bear dropped in his tracks. 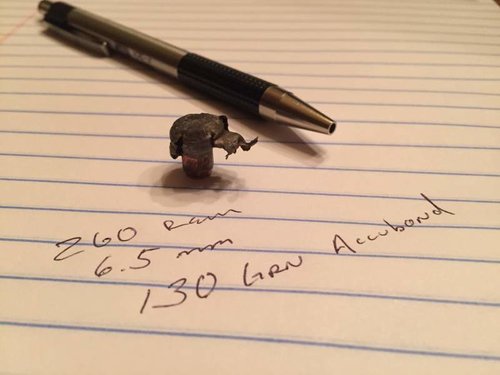 Don't worry about it! Go forth and slay! That 6.5 Interlock will hammer any cow elk. ABs, Partitions etc., are all great, but the Interlock bullet (especially in the 6.5) is more than adequate. That long, moderate velocity bullet will kill far beyond what its ballistics indicate.
You must log in or register to reply here.