2021 Wyo Antelope with the Spawn

This was a quick trip with spawn number 1, we only had a total of 3 days to hunt and 1 day to scout in central Wyo. Originally I was just planning on going solo and spending a week with my tent, but that changed when spawn #1 used his mothers persistence and I finally caved and called him out of school. But I had to promise to have him back in time to make at least one football practice and his game that week, which turned my trip into a very quick turnaround. Worth it.

The plan was again to tent camp and get up there to allow two days to scout, that turned into one since I stayed for the kids football game and left a day and a half later then I expected. We got up to Wyo and he set up camp while I made sure my camp chair and beer koozie work as they should. We then went to check the rifle and had to make a few adjustments, but all went well. He was pretty proud of the first round that touched the ringer. Campfire, smore's were next. 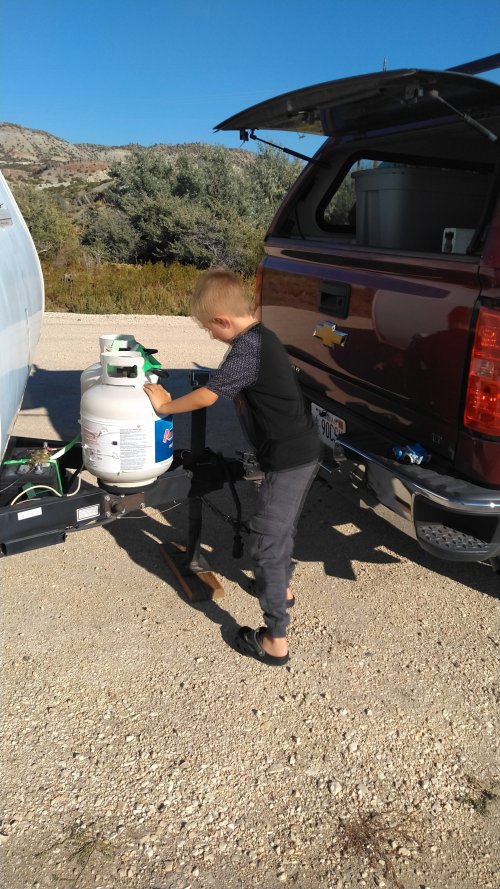 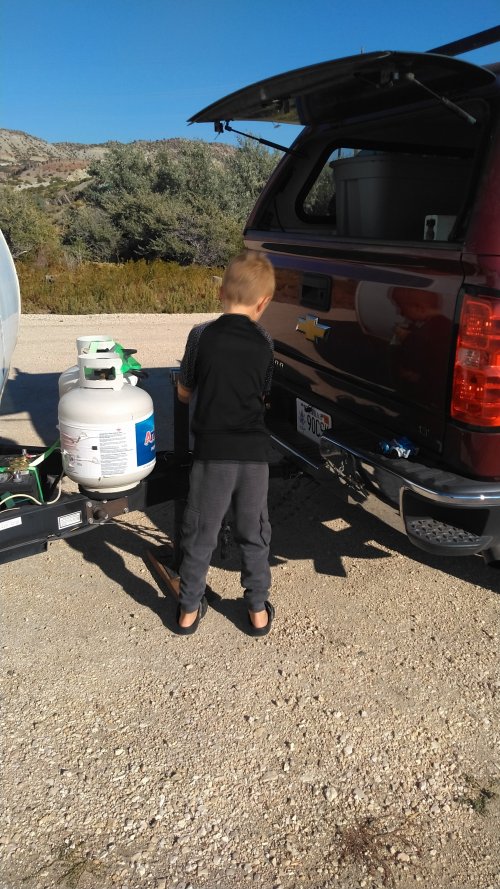 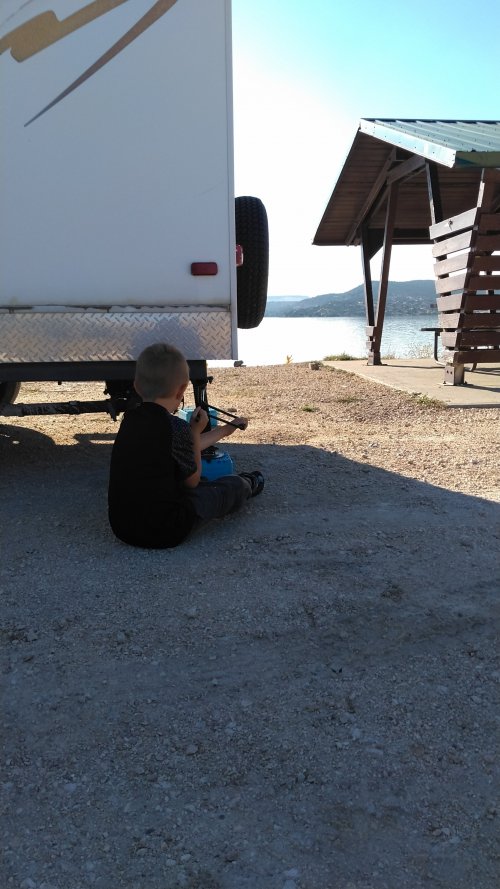 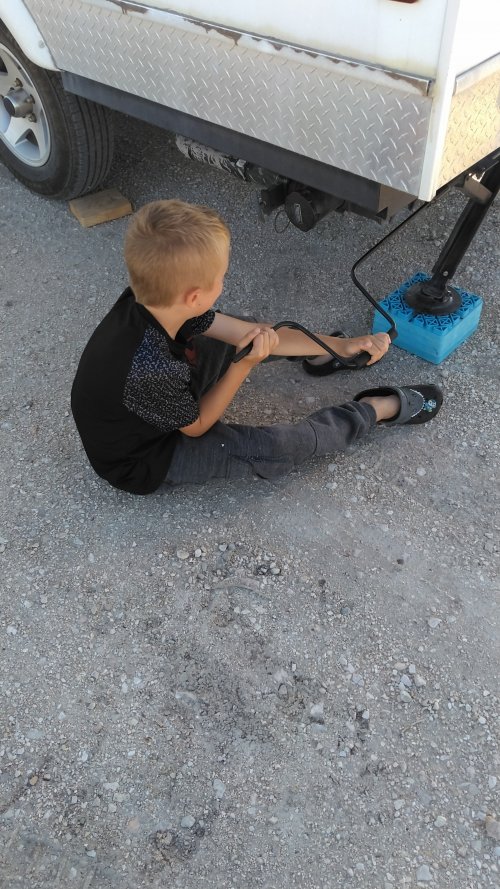 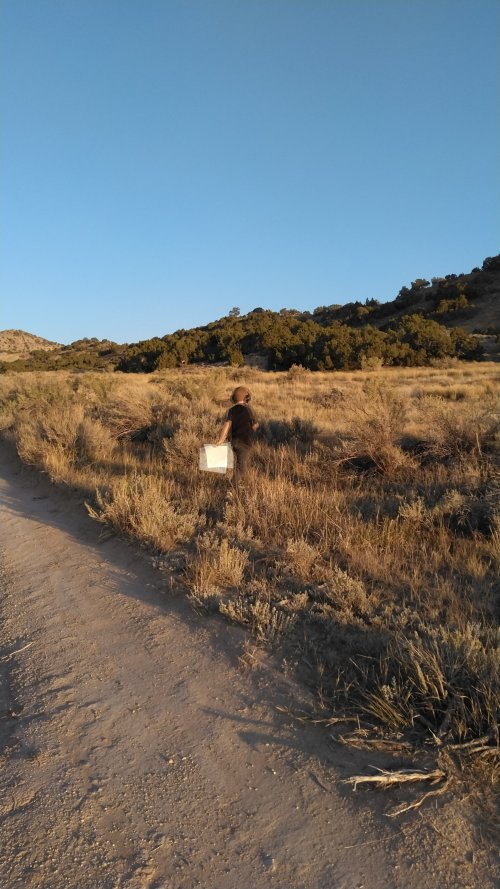 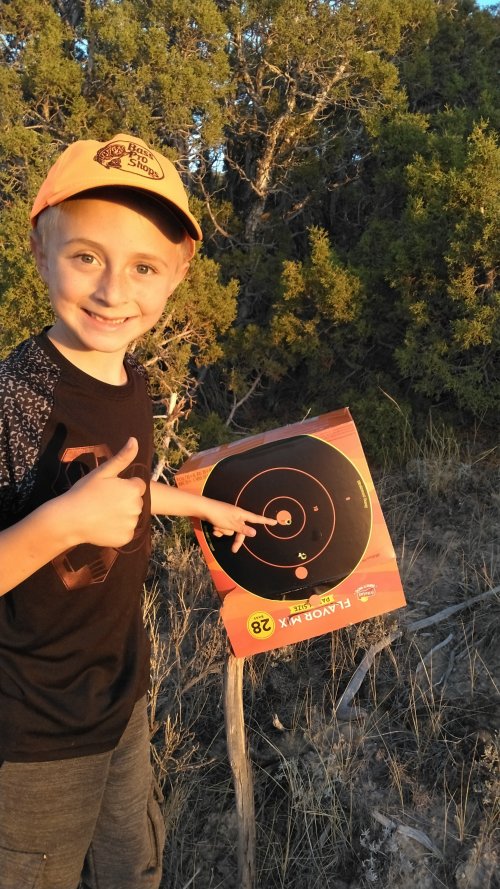 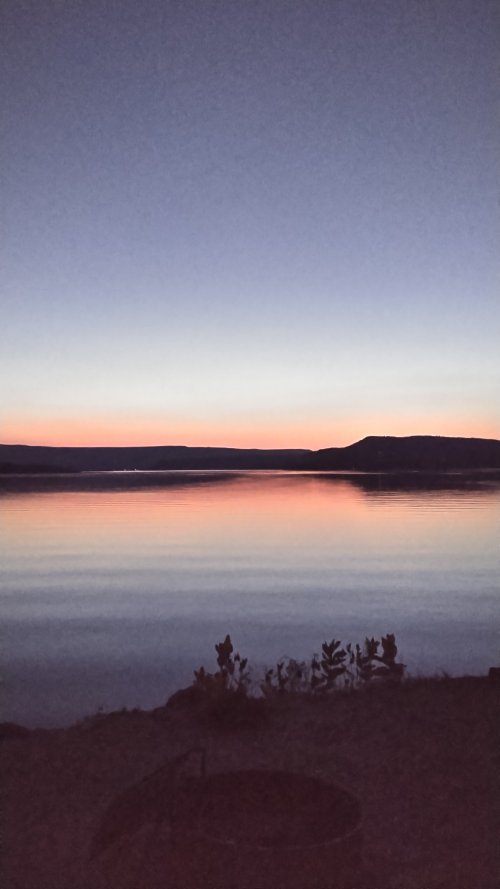 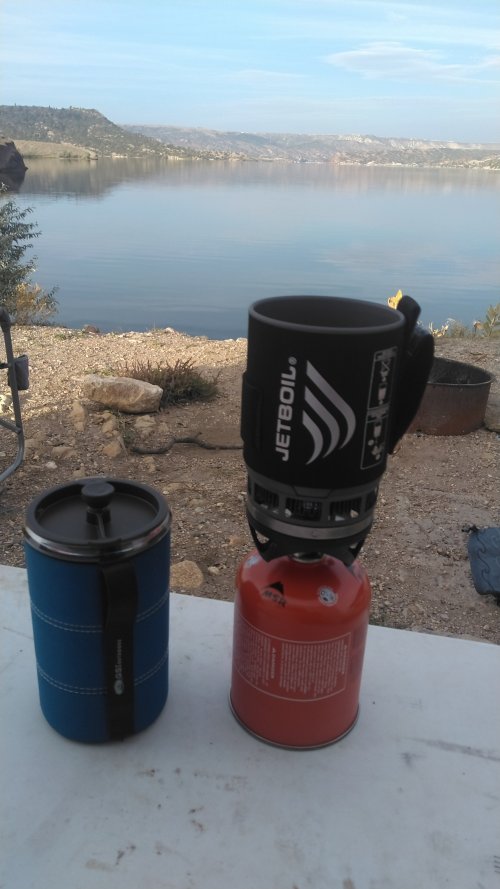 The next day we went to scout some areas that I had found closer to the road and within somewhat close proximity to water, didn't take long to find a pile of bucks chasing does. None that really were eye popping, but a lot of very decent bucks. The rut action was awesome, the spawn absolutely loved watching the bucks chase the does around and grunt with just about every step. We marked a few locations after short hikes and worked our way around the unit. He really enjoys cooking those mountain house meals on the jet boil, so that's what we did. Went back and he made dinner.

Next morning we went to the spot that held the most antelope we saw, although it was surrounded by BLM roads we didn't see another hunter. Nearly immediately we glassed up bucks and does, nothing we wanted to pursue so we kept moving. A few miles later we found a group that looked promising. We found a buck that would be my biggest to date and got to moving. We attempted to follow a small drainage around half a mile to give us a 300 or so yard shot. But he was on the move and went past the point we thought he'd be. We still were in good shape for a stalk and followed him for about an hour before he finally got a hot doe and chased her back towards us. Wasn't to be, that doe zigged when she was suppose to zag and took the buck out of sight for good. Was a fun stalk but back to the truck we go.

After about 5 or 6 blown stalks between me not having a round in the chamber, him not getting his hearing pro on or me forgetting to silence my phone and back to him attempting to juggle rocks he found while I was getting a range on a buck. It was comical. With only have a few short days left to hunt I wasn't going to be too selective and we finally found a group of bucks and does pretty much staying inside a bowl with water. So we parked and worked our way down to the lip of the bowl and slipped over the edge and sat down to wait. We watched bucks chase does up and down, around the water and back and forth over the edge of the bowl for a while before a buck chased a doe to within 200 yards of us. Not what we were looking for, so we just sat and watched. Pretty soon they all cleared out of the bowl and we stayed. Wasn't long before more came over the lip and dropped down to water, this time a few bucks came through that wouldn't get a pass.

One of the bucks that we decided wouldn't get a pass chased a doe to our side but wouldn't stop. We whistled and waved a hat with no luck. Off he went. We made a game plan for the next one. Around 30 mins later the same scenario played out, buck chased doe off the water and up to our side of the bowl. When I gave him the thumbs up he stood up behind me as if he was going to jumping jacks and waved his arms. The buck and doe came to a screeching halt at around 150 yards and proceed to blow and stomp as the split second they stopped. I was ready this time and shot placement was good. He dropped where he stood. 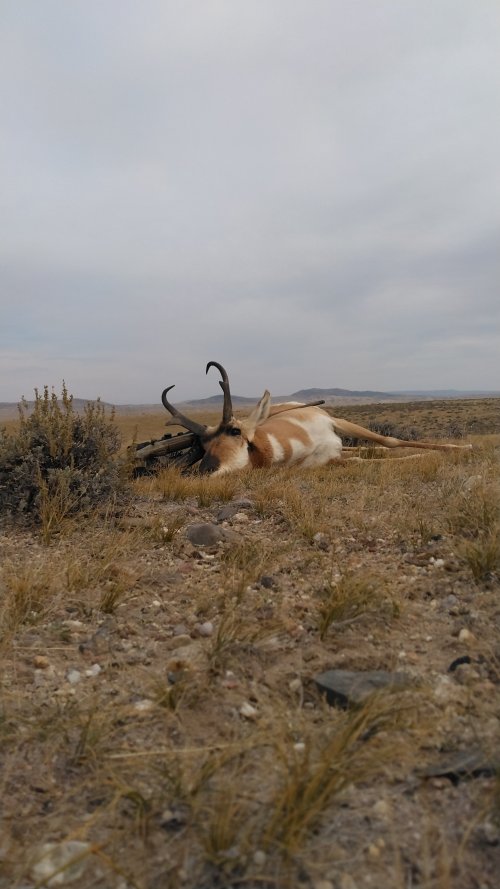 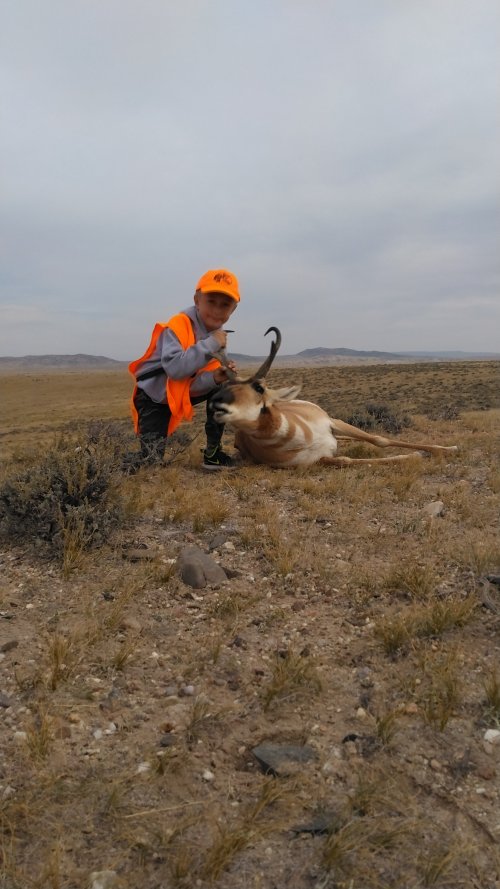 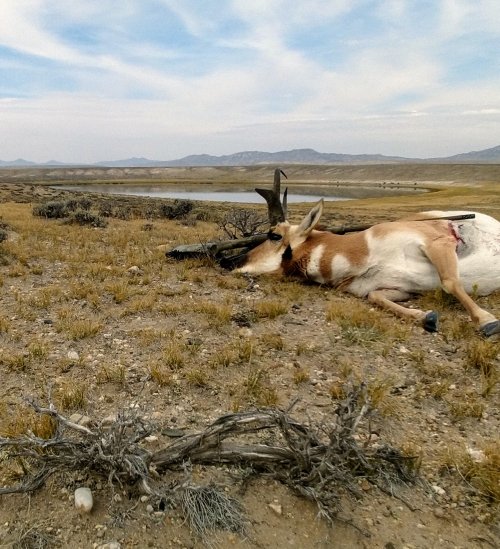 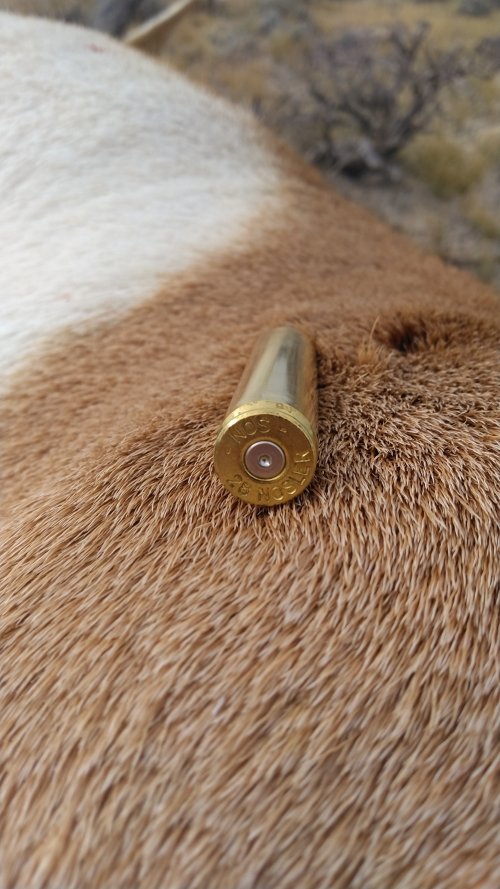 After we broke him down and got him back to the truck we had lunch down by the pond and just sat there and played the water for a few hours. Still had a few doe tags but we were in no hurry to fill them. We ended up driving around and made a few stalks on groups of does with no luck. With the tag allocations already there we didn't push too hard on the doe tags. Plus he wanted some driving lessons since no one was around and we had miles upon miles of BLM roads to roam. 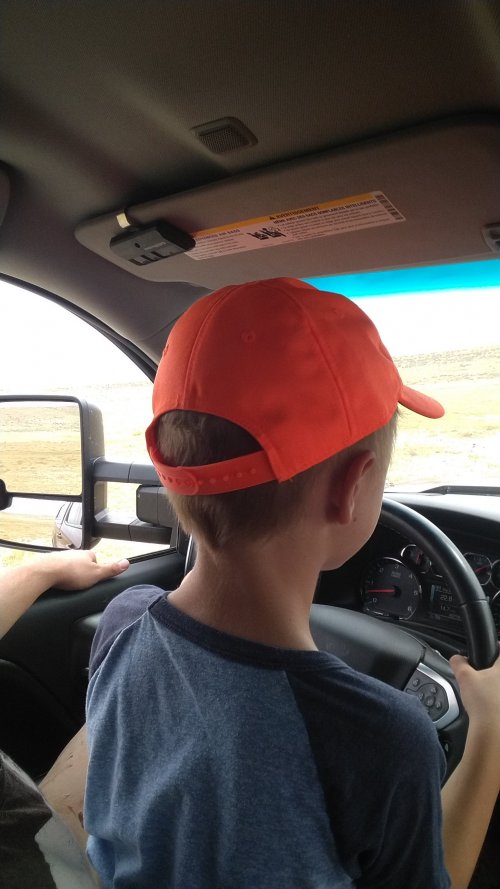 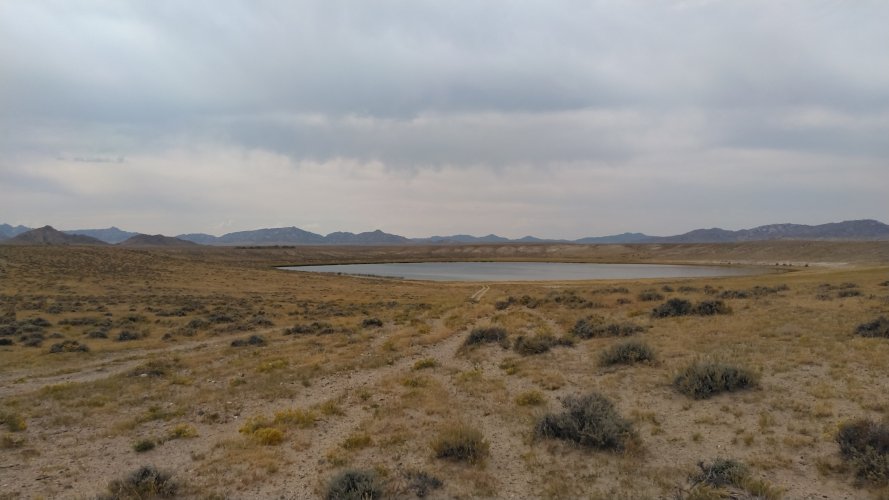 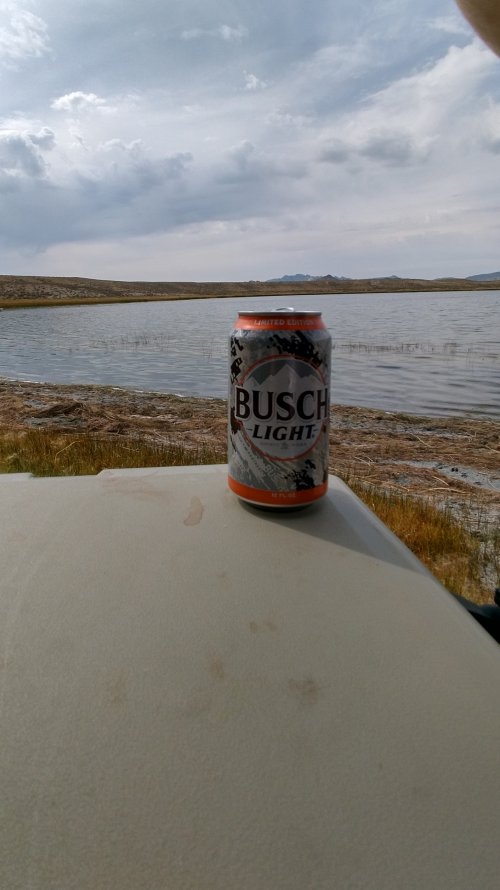 The last day of the hunt found us in rain, snow and cooler weather. No big deal except dad forgot to pack the spawns rain gear and boots. He had been hiking in traveling in his crocks and tennis shoes. With that in mind, we didn't go too far off the road in hot pursuit of a doe. We came close a few times and spent around 4 hrs. playing cat and mouse with a group of does in some sand hills with a break in the weather. Came close a few times and probably could've filled the tag, but we didn't pull the trigger. Rain came back in and we headed back to the truck. The spawn was pretty concerned that we didn't fill the doe tags but he understood that we didn't really need too and it is fine and our choice to eat tag soup on an already hurting population. Besides, we have a pile of whitetail tags in Kansas & Oklahoma. So we packed up and said our goodbyes to a great camp spot and a fun trip. He had a hard time believing that everywhere we were was public and open to us compared to what we have down here in Kansas. Lookout Wyo or Montana, you might have to open back up for at least one more family to relocate! Both of us can't wait to see what we draw next year. The end.

A fantastic out of school experience. Well done sir

I loved reading your account of this hunt. Congrats to you both! Sounds like a great experience in a great area

So much great in this. The goofing around on stalks cracked me up. Reminded me of going with my dad on hunts when I was a kid—he’d be glassing and I’d be throwing rocks or something. Then he’d give me the look…

Awesome time with your offspring. No price can be put on that.

Lots of perfect in those pictures.

Great job, your boy will remember this forever

Great memories made. Way to go Dad. Congrates on a nice buck.

Sometimes Spawn learn more is the field than in the text books. Good job!

Yup, definitely worth it.
F

That's good stuff right there!! I venture to guess he learned just as much or more spending that quality time together than he would have in a classroom and he will for sure remember those days hunting with his Dad.

This is great! Your little guy will have some awesome memories made!

Great write up and pics. Thanks for sharing!

Great hunt
You must log in or register to reply here.