I finally cut my 2020 Saskatchewan Ursus Americanus tag on a beauty of a bear, a beautiful dark chocolate with white throat patch! This particular bear came to my site only five times between 8 and 15 May, got him three times on camera and twice in person. He quickly became numero JUAN on my hit list after I saw that first picture of him on the 8th, the day before my first hunt. My first sit of the season on 9 May was pretty eventful, I saw three smaller bears most of the day (two black boars, one with a throat patch, and the most gorgeous cinnamon sow I've ever seen in person, she's been hitting my baits since 2018). Early that evening I saw the bear that I would shoot come in from down wind, silent as ever, slowly making its way to the bait. He would stop right below my trail camera, at 20 yds and stare straight at me for what was probably 45 seconds, giving me nothing but a frontal shot. I stood there, holding my bow up, praying for him to commit, but he took a final sniff and bolted out of there faster than you poo your pants when a bear climbs up your tree stand! The cinnamon sow came back to the bait until late evening, she was briefly chased off the bait by numero dos on my hit list, a big jet black boar, who was quickly chased off, before I could take a shot, by that apparently very hungry cinnamon sow, bummer and what a bitch! The second day was more or less the same during the day, lots of action from the three smaller muchachos/muchacha until late evening when number tree showed up. A decent size cinnamon with a beautiful fur coat, he was the most regular bigger bear on cam and I was going to shoot it if I was given the opportunity especially since we had a two bear limit this spring. He came in but the wind was a bit ****y, still he committed but very skittishly. I made what I thought was a good shot on a very nervous bear, complete pass through. I waited an hour and started tracking, the more I thought about my shot, the more I could visualize my shot that was a bit back and had hit its liver. I tracked him for the next three hours through the thickest stuff and finally ended at a fast moving, overflowing brook/river. The bear had taken a swim, never to come out the other side, most likely drowned and washed away. I was devastated, to find the blood trail leading to that fast water meant that I probably would never find that bear again, had it not been for that river I most likely would've found it the next day. Further searches up/down stream lead to nothing but more deception, I had to leave to go back to work and had nothing but my lost bear on my mind for the following week (and still do). It freaking sucked and those of you who have lost animals know how much it sucks donkey dicks. I shot my bow all week in preparation for the next hunt, my sights weren't off, this bad shot was 100% on me.

Fast forward to last Friday, last minute I decided to take my bow and my rifle, just in case since I had had missed archery opportunities on two really big bears the previous weekend. I sneaked into my stand later than I normally like to and the moment I sat down and nocked an arrow, a small bear walked in from the trail I had just came from. That little dickweed came very close to dying, he climbed up the tree my trail cam was hanging from and started chewing on my new Spypoint (you can see the angle changed from the pictures below). I hissed/barked at him but he practically flipped me off so I grabbed the first thing I could and threw an apple juice box at him, he didn't seem to mind but did climb down the tree. He chilled at my bait for about half an hour when he suddenly looked back and bolted out of there. I started shacking and got the "holy shit, a big boy is coming" feeling. Well he never came, instead, the bear circled the bait, caught my scent and spooked without me ever seeing it. The rest of the evening was very slow, like nothing slow. Around 1945hr that night, my wife texted me, she was clearly feeling bad for me since she was saying I should extend my trip by a day. Happy that I had gotten a free pass to extend my hunt, I jokingly said that I wouldn't need the extra day anyway as the big boy would come out at 2000hr. Well I wasn't all that wrong, at around 2006hr, Juan made an appearance. He came from downwind, again, but the wind had slightly shifted for a moment, he came in strong only to stop at the bait with his vitals covered by its massive shoulder/arm. Again, like the previous week, he looked straight at me, licked its lips a couple times, caught my scent and bolted out of there faster than a Liberal spends your taxes. But this time I was prepared, I quickly switched to my boom stick, he stopped and gave me one final look at roughly 80 yds and I let a 180 gr Partition down range, PEW! Found him around 2030hr and I was floored, holy shit was that a massive bear! On my way back to the stand to grab my gear, I saw numero dos while I was on the phone with my wife (I always call her after a kill), well that's when I REALLY messed up, I think I said something like "wait babe, let me put you down, I see a massive bear and I want to check him out with my binos", well, she says she heard something more like "OMG THERE'S A BEAR COMING RIGHT AT ME". Anyway, after being told I'm an idiot who scared her shitless for 5 minutes on the phone, I made the best of the remaining sunlight and did a quick photo-shoot. I spent the next hours, by my lonesome self, in the dark, with my wife calling me every 15 minutes to make sure I was still alive, skinning and quartering him up. Meat was hanging by midnight and I was finally making my way back to the truck for a well deserved, very cold, trailer shower. 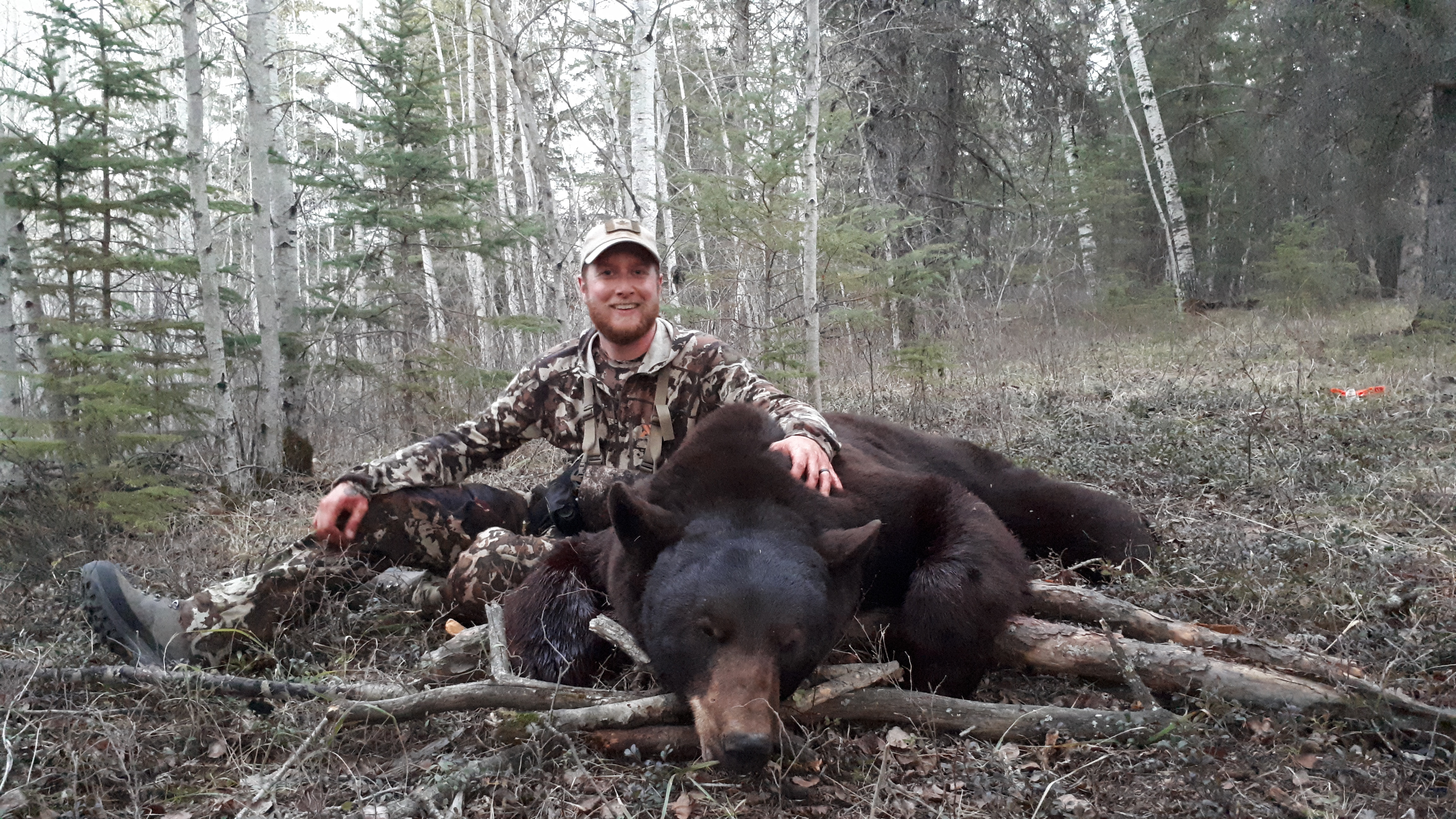 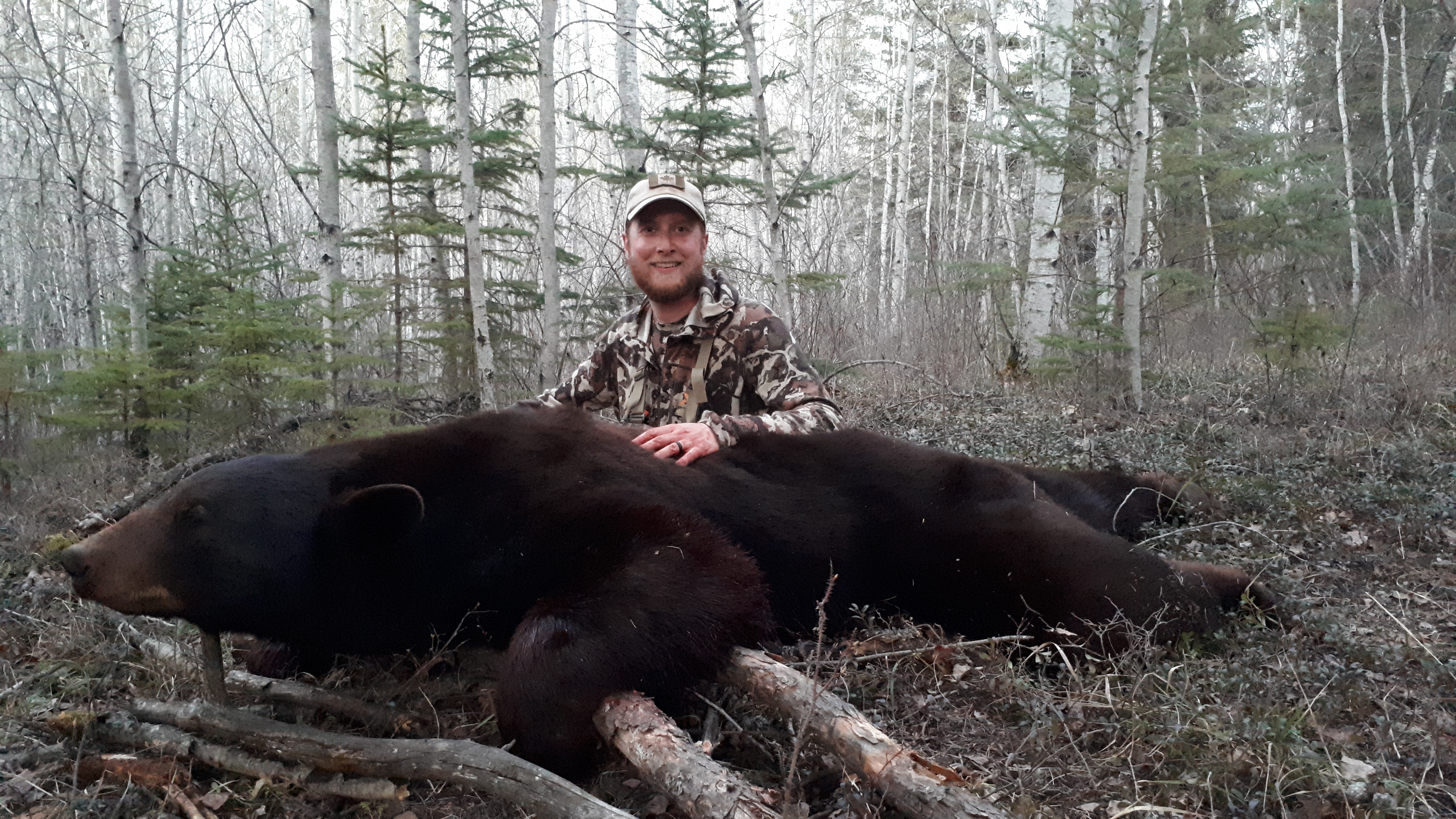 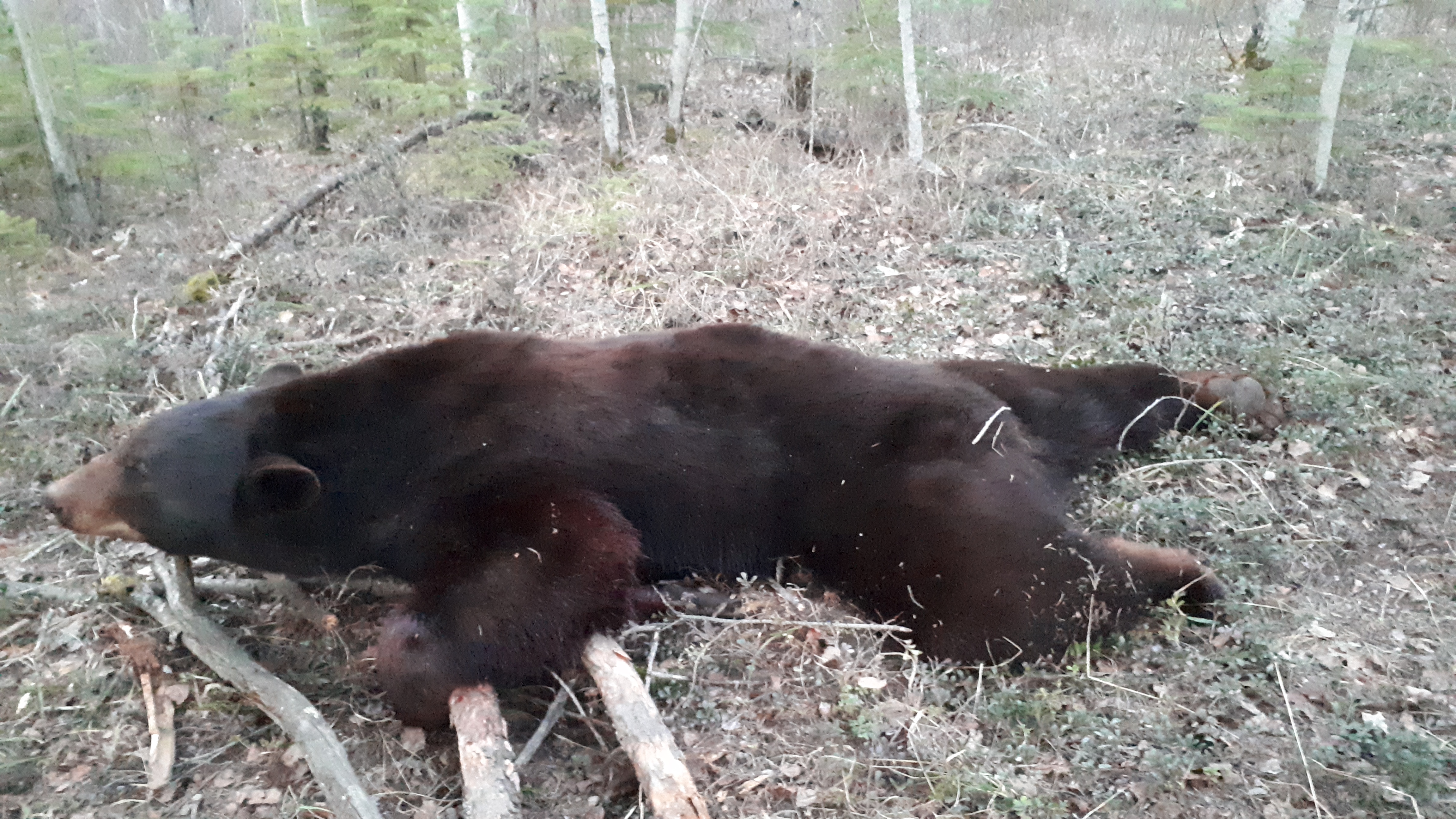 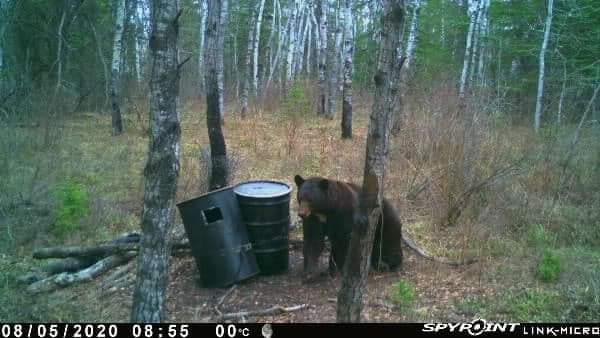 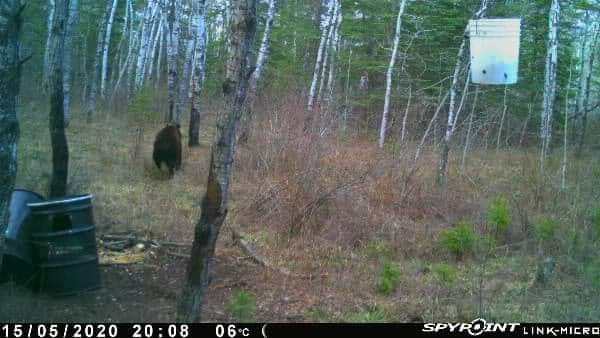 Numero Dos who will hopefully live until next year to become numero JUAN: 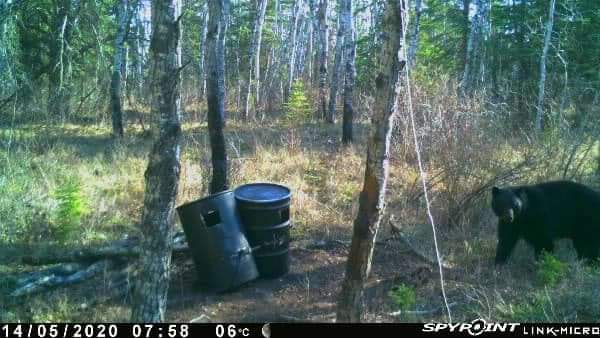 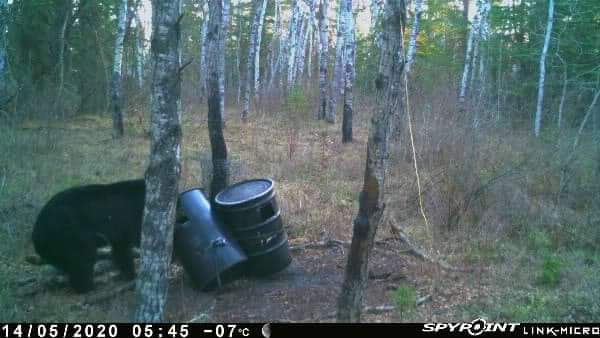 I feel extremely happy but am still very bummed out about my lost cinnamon. This cinnamon will have the last picture of him I have, printed with my remaining tag attached to it and go in my "memory" box. I got home to two extremely excited kids (DADDY KILLED A BIG BEEEEAAAAAARRRRRRR) and finished butchering him up today and finished the euro mount, I took several measurements and they all came to 21 2/8 (official B&C is 21 7/16), I couldn't believe it. My wife, on the other hand, is literally over me and my oldest talking about my giant Sasky bear, but she will have to suffer through the rest of this isolation with more of the same story. To be honest, I think she kind of wished that bear really charged and ate me...

Congrats!! I hunt in a one bear zone and wish I could go after a second one still
S

What were the dimensions on his head?

Sask hunter said:
Congrats!! I hunt in a one bear zone and wish I could go after a second one still
Click to expand...

If it weren't for that lost cinnamon I'd still be out there, but it is what it is I guess...


Sask hunter said:
What were the dimensions on his head?
Click to expand...

Deal with it!
S

What a absolute giant, I would say the Saskatchewan boys have it going on great work! I absolutely love Saskatchewan.......

Congrats on a fine looking bear.
1

That is one heck of a bear! Congratulations! Beautiful coloring on him too.

Congrats, that's a heck of a bear my dude.

I checked my measurements again and came to the same very conservative score. 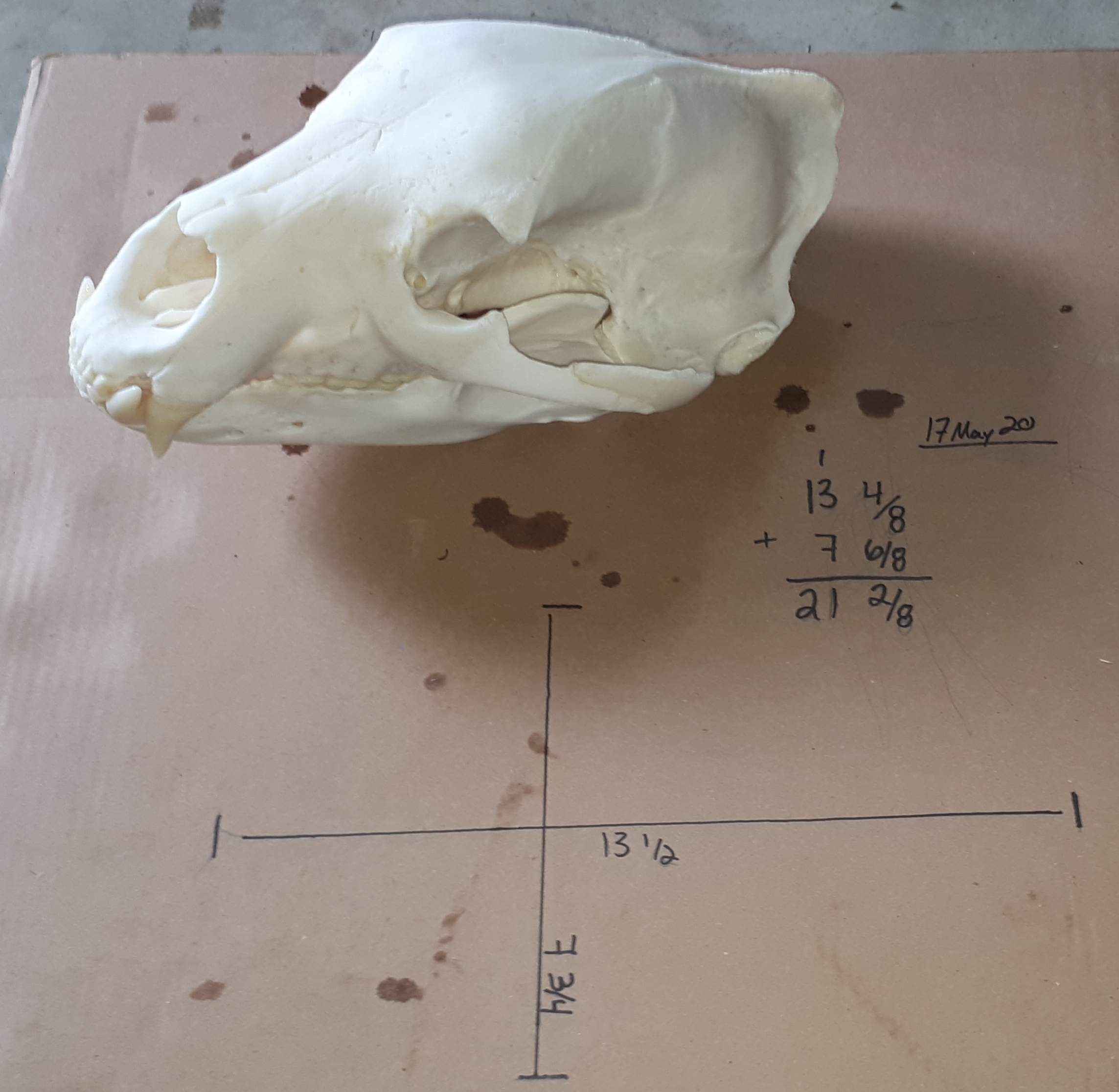 SaskHunter said:
I checked my measurements again and came to the same very conservative score.

Congrats on a beautiful bear, man you sure cleaned that skull fast, im guessing you boiled it. Will be interesting to see final measurements, many people say you loss a lot more boiling vs beetles.

stew said:
Congrats on a beautiful bear, man you sure cleaned that skull fast, im guessing you boiled it. Will be interesting to see final measurements, many people say you loss a lot more boiling vs beetles.
Click to expand...

I read that too. I personally simmer my skulls with oxi and don't leave them more than an hour in. Pressure washer takes care of the rest.
S

SaskHunter said:
I read that too. I personally simmer my skulls with oxi and don't leave them more than an hour in. Pressure washer takes care of the rest.
Click to expand...

ya don't leave mine in long either, have scored them right out of the pot and no change after 60 days and have seem some change up to half inch
mind you those were first scored by others, I think a lot depends on age of animal as well older skulls don't shrink as much. I want to get beetles
some day just no were to keep them right now.

Great bear! First spring in several years I wont be chasing them... There certainly is something special about being out in the bear woods in the spring
S

SaskHunter said:
I read that too. I personally simmer my skulls with oxi and don't leave them more than an hour in. Pressure washer takes care of the rest.
Click to expand...

Did you do anything to whiten them? Cause it looks real good
You must log in or register to reply here.