And the results are in------------well some of them anyway. I’ll call this my shake down cruise. LITERALLY! There is a bunch of energy being released when a bullet hits those jugs. The board I used to lay the jugs on started coming apart after the third hit. I ended up nearly breaking it in half! There went $30.00 worth of lumber and a couple hours and hardware to build. Back to the drawing board. Pics to follow. 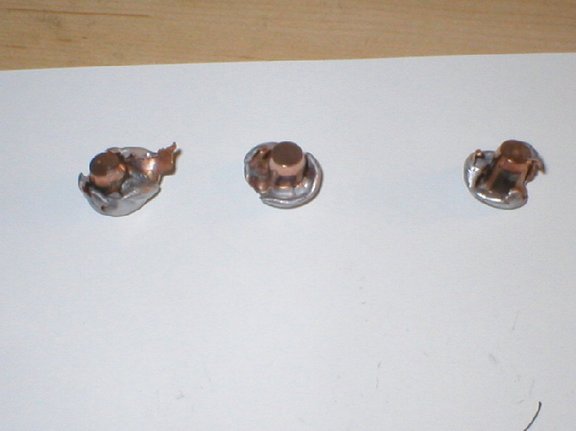 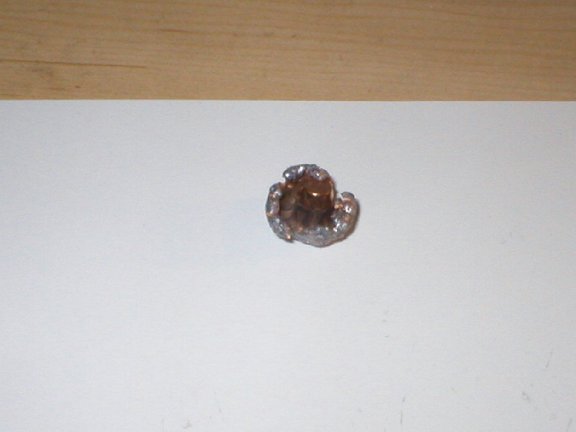 Here’s the only interbond I could capture. Problems with the stand caused one other one to be lost in the grass. Retained weight 140.1, expansion .715, weight retention, 77%. Like I said it and the lost one only penetrated 3 jugs. 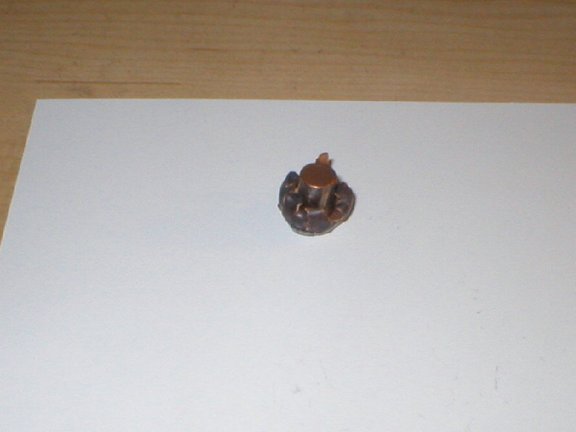 I had a partial box of 25 year old Rem core-locts sitting around. I thought, ”I wonder how the dark ages technology compares with today’s newest?” Well it fits between the interbond and accubond. Ret. Weight. 131.0 expansion .625, 72% retention. Also the prettiest most uniform mushroom of all.

No pics for the MK! Couldn’t find enough of 2 bullets to weigh or take pics of. Total disintegration! Same for the SST. Blown to pieces, just shards of lead and copper jacket in the last,(third), jug. 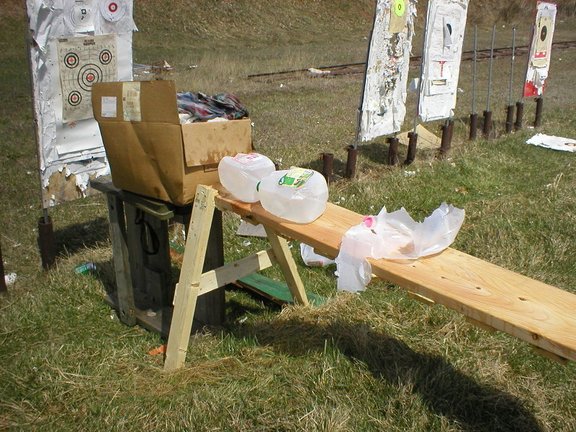 This WAS a 10 X 2 , 6 feet long. The legs were nailed, screwed and gorilla glued to the notched ends of the board. All I have left are the legs! The board was cracked and nearly broken in half right under where the first jug was sitting. I screwed and gorilla glued 1 X 4 pine under the board to keep it from splitting lengthwise. Oh well, next time I may just make it out of steel!
1

Those Accubonds sure look like winners! I'm contemplating using them as my go-to bullet in my .338. That BC of .550 doesn't hurt.
D

The Accubond bullets are the result of a proven technology originally used to make the Trophy Bonded Bearclaw bullets. They should perform every bit as well as this well known top end performer. I just wish they would extend the list a bit.. Like to include several 6.5s and an 8mm or two..

TBBC have a solid shank and the AB does not.

In theory the TBBC should penetrate more as the solid shank retards expansion at a given point and it retains more weight. However, the AB has a vastly better BC so it will fly a bit flatter & buck wind better.
W

Thanks for posting your results. You went to a lot of work. Do ya have any plans to try out a Barnes Triple Shock? I'd be really interested in that.
D

The statement that the technology used to make the TBBC (Electro-chemical bonding of the core to the jacket) is similar, is correct. The design of the Accubond jacket retards the possiblity of over-expansion (observe the test bullets in the first part of this thread.)

Just stated design differences. I see one as a super-duper smashem'up close kinda thing and the other more suitable for longer ranges. I wonder if an RUM could peel an AB back more??

Maybe putting the jugs on foam and putting that on the board would make the board last longer for testing.
S

I wish I could get a closer pic of the front of the mushroom on the accu-bonds. There seems to be two seperate cores, or different hardness in the core. Hard to explain but the core does not seem to be homogenous. The interbond on the other hand semms to be all one consistancy.

Here's the test I did last summer with the 165 interbonds. 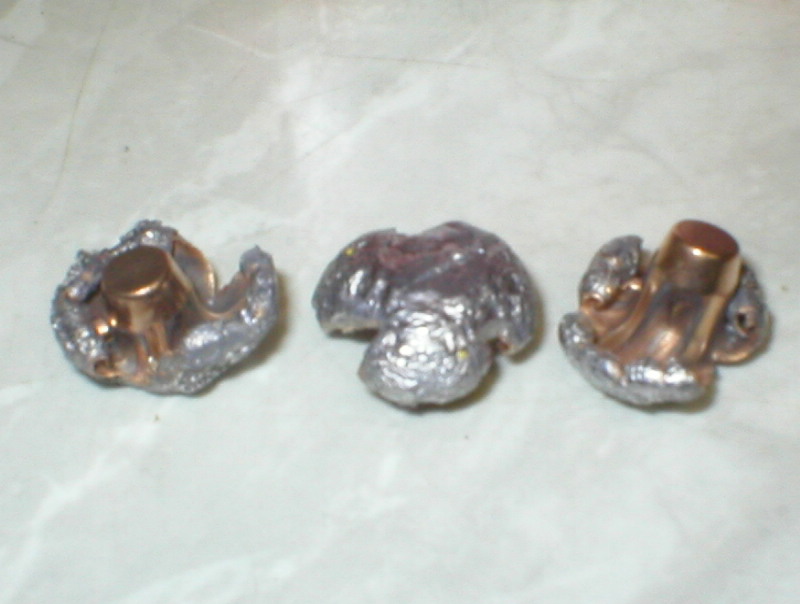 Better weight retention, larger mushroom. I'll try to take a closer pic of the front of the AB's.

As for that @&*%$# board, I would imagine the board does a whiping motion when that much pressure/force happens in one spot. Next time I will run 2X4's along the edges AND accross underneath. Maybe I will try something to cushion the jugs too. That gorilla glue is too brittle to be any good.

Snuffy- Don't have a RUM. Would just be curious is all. I've read of reports of the Swift Sirocco no penetrating all that well due to its HUGE expansion. These two seem to have that problem licked. I think either of these are excellent bullets, the AB especially so. From others testing them, their penetration has been w/in a c-hair of like weight partitions.
You must log in or register to reply here.

M
Lots of Ammunition For Sale- Below cost prices

J
30/06 and the bullets used in Africa this year

J
Bullet failure what does that mean?