Hey whitetail hunters,
Here are a couple pics of two deer that were shot this year by my brothers. These deer are not elbinos or piebalds they are genetically white deer. Their eyes mostly are like a fire blue. The deer are completely white with the exception of the glandular areas which tend to have a brown staining. They were taken on a military base in New York. The base has a drawing to get on,(I sponsor them on) once drawn to get on, you have to draw a white deer tag. My two brothers were lucky enough to draw the coveted tags. It's shotgun or muzzleloader only. One brother drew a white doe tag, and the other drew a white buck tag. Well as you can see they both scored. The buck has a 23 1/4" inside spread but, has a screwy rack. The other deer is a button buck. They are amazing to see, alive or dead! The button buck was my brothers first deer. The buck was weel overdue for my brother he has been hunting there with me for 8 years and never scored on a white deer. I was so glad that they both got their white deer. It was the last year we will be able to hunt the base, it closed 2 years ago! It was a fitting last year! 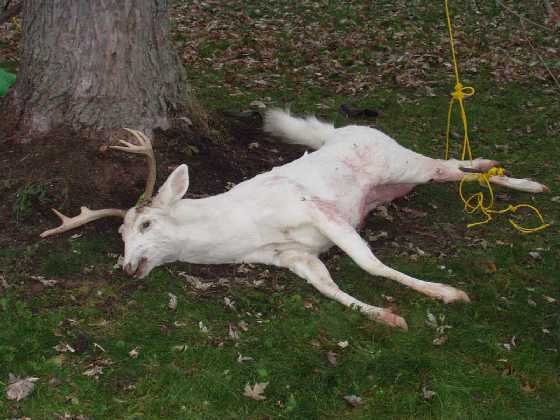 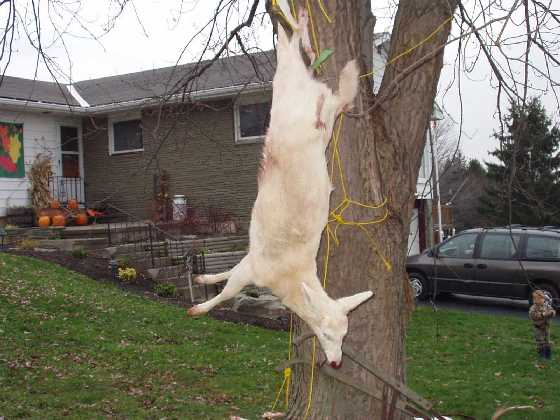 Those are really cool deer. Thanks for the pictures and a big congrats to your brothers.

Congrats to your Brothers! Love the pics

They are cool looking deer, Congrats to them

Hmm. White deer with blue eyes in New York.. Is this anywhere around the Love Canal?

Seriously, is or was there a genetic strain of deer there who were naturally void of pigmentation? It's east to see that the skin was as void of color as the hair. And the blue eyes..that is a natural phenomenon that accompanies vaso pigmentosa..

That's an interesting condition. I wonder if 1Pntr has seen this or knows of anywhere else this condition exists as a hereditary trait. I've seen the occasional white deer and I think Elkhunter even posted a pic of a white Elk a while back...

Those are nice looking deer i wish i could take one of those deer. Nice pics
T

Congrats to your brothers, those are cool pictures!! Thanks for sharing them!!
E

I read about those some 30 years ago..Very cool!!!