Well, it was a nice day for a walk anyways.

We went to a NAVHDA training day this past weekend, second time for Ruby. If nothing else, these days are really good for her, being around so many new people/dogs. She is so unbelievably shy. We worked on heeling for a bit. She settled in with the easy lead pretty quickly, I was expecting a struggle. We added in a stop on a place board for some whoa practice at the same time. She started picking that up pretty quickly as well. 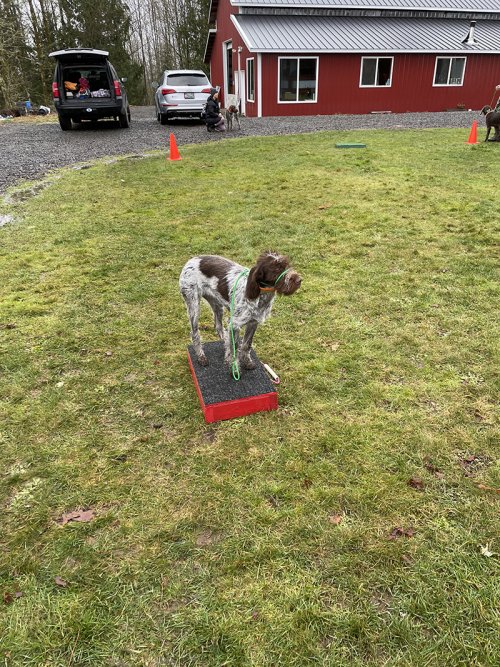 Later we did some tracking work. She struggled at first, but she found the dead dove eventually. A month ago at her first training day she tried working with a bird launcher and it spooked her pretty good. Yesterday when she found the dead dove she was reluctant to approach it as it lay there in the grass. Another volunteer helped me work with her and soon she was pulling at the leash to follow the guy as he drug the bird. She followed right to it and would pick it up and play with it. We also hand released some live birds for her to chase. At first she acted scared, and I realized that she was actually nervous about the stranger holding the bird and not the bird itself. So he gave them to me and stepped back. She quickly got excited about them and when I released, she chased them around the property. It was a relief to see the excitement grow in her from those few interactions. We're taking it slow and having lots of fun.

Waiting her turn to track, she sat on my foot and leaned against my leg. 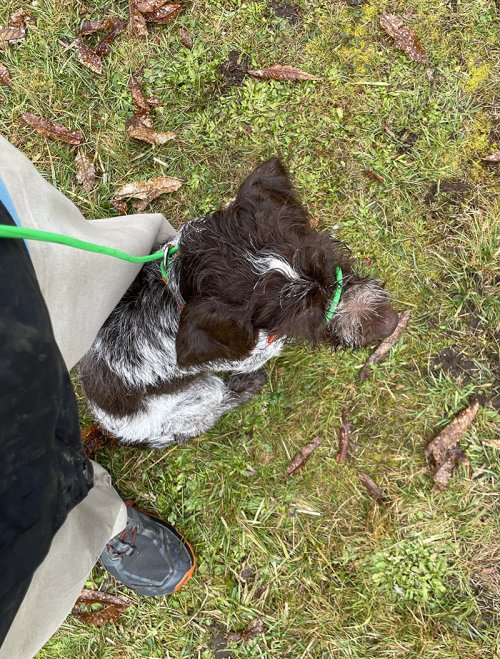 Ruby done had herself a pretty great bird dog weekend the past few days.

We started out Friday at a couple public land areas. At the first we flushed up several coveys of quail. I'm beginning to notice that while she isn't pointing anything, she is definitely aware of the quail before they take off. And she gets real fired up after they fly and beats the bushes pretty hard looking for more. Second spot was new to both of us, I just wanted to see what the terrain was like. The terrain was way better than I had anticipated. Not 5 minutes after we left the truck, she got visibly alert and was tearing back and forth through the sagebrush. Shortly thereafter she flushed a pheasant hen and took off after it. It was the first time she'd flushed a pheasant close enough that I thought it might spook her, but she was all about it. Not long after, we flushed a second hen. We were maybe 30 feet apart and it flew from right in between us. I about peed myself, but she gave chase again. After being spooked by the bird launchers at a NAVHDA training day, I worried a bit about how she would react to a close-up with a pheasant. She did amazingly well.

Further into the property, we found a series of small ponds. Every one was loaded with ducks, I've never seen so many in one place. She didn't pay them much attention, but when we walked up to the water's edge, she decided to walk right on in up to her chest. Last time we were next to some water, she was nervous and not too interested in getting wet. Out of curiosity, I tossed a stick maybe 10 feet out into the pond, and to my surprise she went right in after it. Started swimming just like that. Finished the day with six miles on my odometer, much more on hers. She was out like a light the rest of the day. 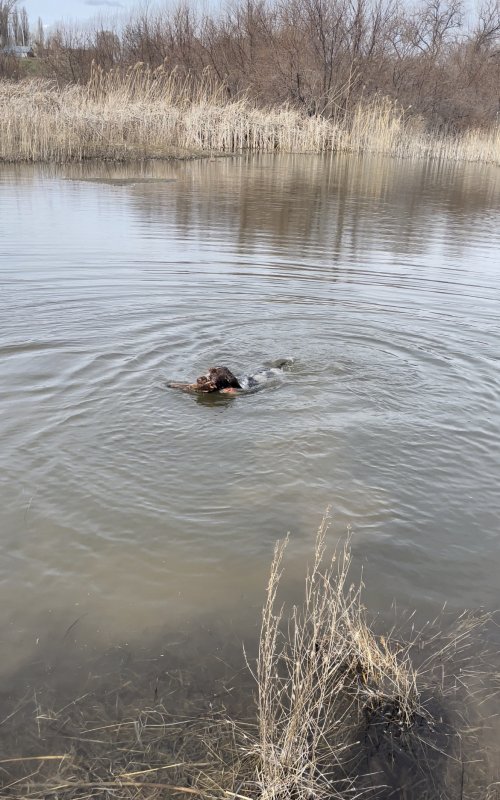 Saturday brought us to a cut hay field that we go to regularly. Sometimes we'll kick up a pheasant or two, but mostly she gives chase to the myriad of tweety birds out there. I brought the shotgun along in the hopes of firing off a blank round or two while she was racing around after these birds. I've done so with a toy cap gun, but not with anything this loud. Much to my amazement, in the spot where we sometimes scare up a pheasant, SIX of them took flight in short order. It was really cool to see! Ruby got all riled up and as she was in hot pursuit, I fired off two blank rounds. She was maybe 60 yards away I'm guessing. At the first shot, she stopped running and looked at me to see what happened. Then she took off again as another pheasant flew nearby and I fired a second round. This time she turned her head to look at me briefly, but never slowed down. She tore out of sight for a moment until she realized she wasn't going to catch those birds, then sprinted back to us.

On sunday we returned to the same field, hoping to maybe catch some of those pheasant again. No sign of the pheasants, but as we crossed the middle of the circle, Ruby ran up and stuck her nose down into a rut created by the pivot sprinkler tires. Out from under her sprang two huns. Of course she gave chase for a bit. I had no idea they would be found around that area, much less in the center of a mostly barren field. Back near the truck we passed along some thick cover on the down wind side. She has always skirted the edges of it, as it is very thick and thorny, and is surrounded by barbed wire. Today she charged into the middle of it, and sure enough out flew a couple more huns. She knew they were there and she went after them, woohoo!

So yeah, Ruby had a good weekend. It's so much fun to see her figure this stuff out as she goes. I'm just out walking with her, trying to get her in front of birds and she is slowly putting things together. And as a side bonus, she's finally starting to figure out that our cat Archimedes is a pretty cool pal, and not just prey to be stalked and pounced on. 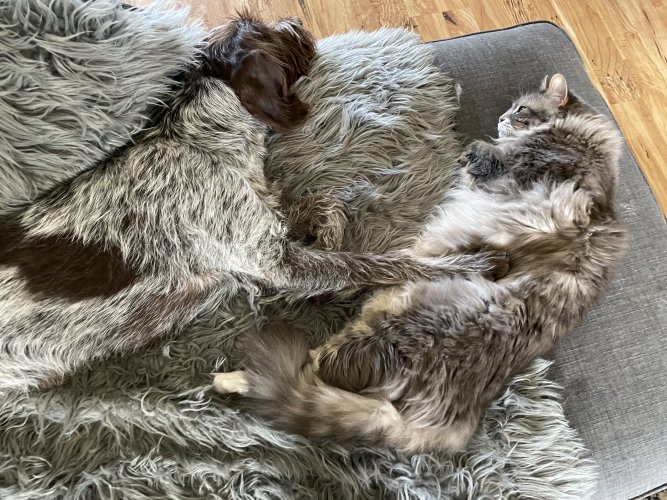 Good walk before the heat set in