Pre-Fishing
I flew into Dallas with my wife and kids, They split off to OBX of North Carolina and I flew into O'hare. My wife was meeting with her family for a family reunion and I was trucking it up to Roger's( my FIL) place.
I landed, hopped the blue line, grabbed some Portillos, and crashed on the sofa.

next morning we loaded my one duffel bag in the outlander and Roger's 12,000,000 bags. dude has more crap then I've ever seen. We did a quick drive to Minneapolis found the hotel and went to sleep.

Next morning We picked up Roger's Son and the Son's Father in law (FIL) and we hit the road.

Crossing the border wasn't a big deal, standard stuff hand over pass ports remove sunglasses. We did get asked how we were all related since me and Roger sat on the same side of the car and I look nothing like him. Over all nothing to complain about. We crossed the border and headed to the nearest bait shop to grab out licenses, 10$ for what is called an "out doors card" valid for 3 years and required to hold any license in Canada and 51$ for an 8 day 5 fish limit tag, they offered a 2 fish limit but the woman behind the counter and Roger warned against that one. While everyone was buying tags I looked through the tackle. The tackle of this part of Canada was spoons, i purchased a couple of locally made spoons and we climbed back in the car. there were a 2 more stops that day. the next one was the coolest bait shop of all time. 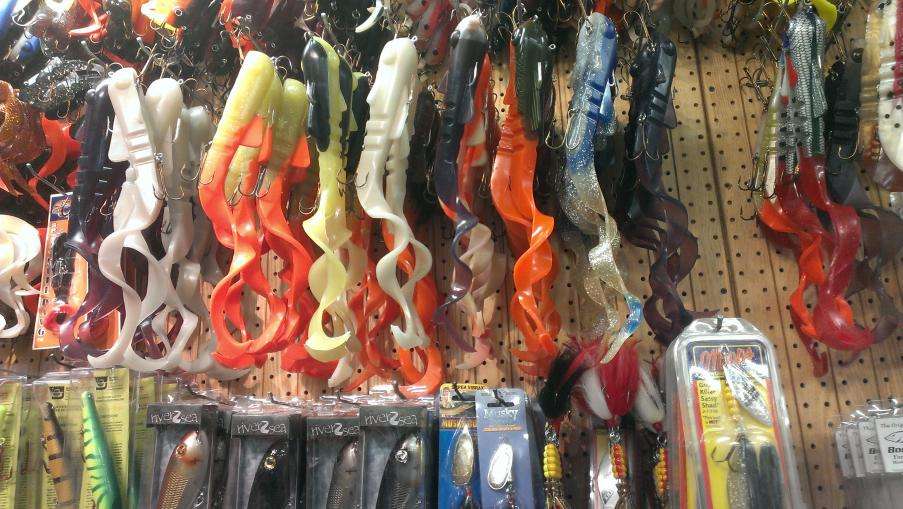 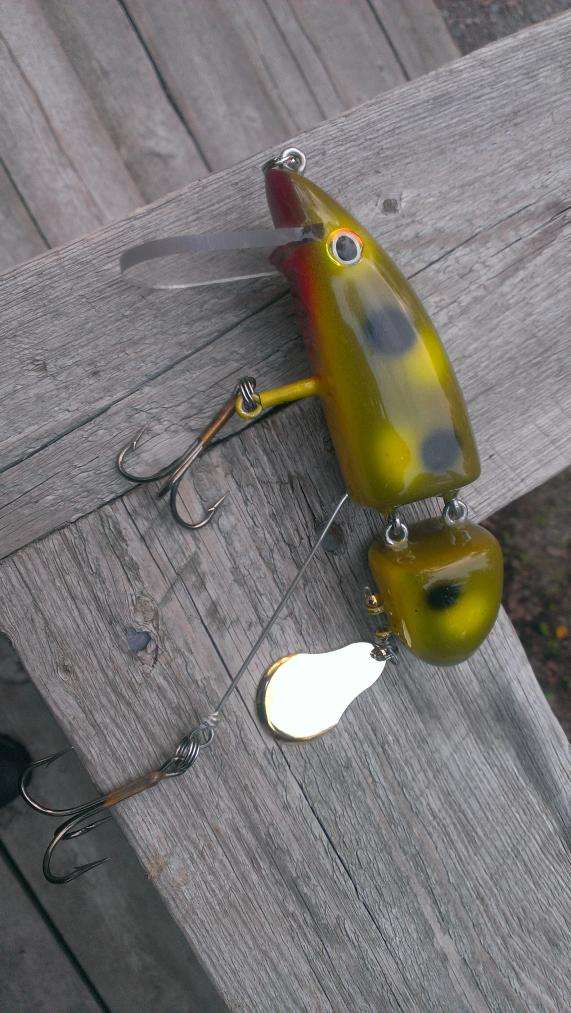 Across from this bait shop was a roach coach we grabbed some food then headed out. Final stop was a chance to grab some beer and Rye whiskey. 10 hours later we made it to the lodge, it was in the middle of no where and stunning, it looks like it popped right out of a German fairy tale. 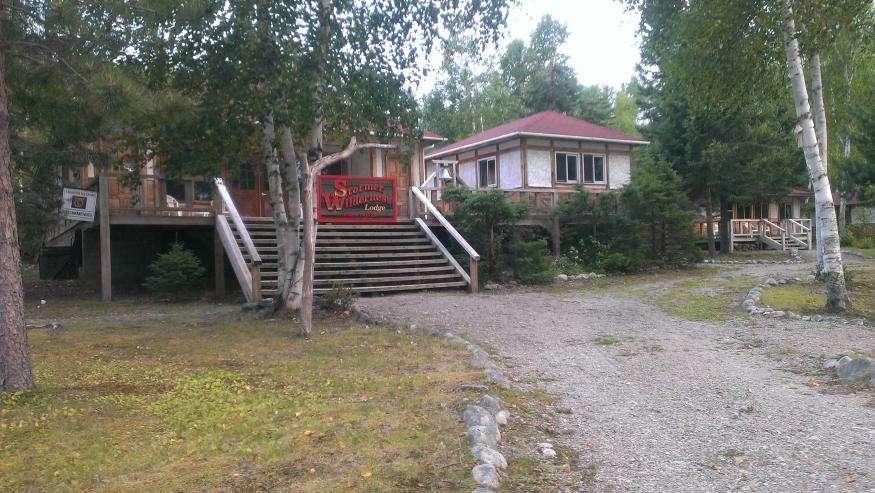 The lodge has 8 cabins clustered around it and the accommodations were top notch as far as roughing it goes.

3 hots were provided every day the beds were clean and made every day when you got back from fishing. 7 am breakfast and 6 o'clock dinner in the lodge and shore lunch. Shore lunch is a magical thing, and was also the reason we were told to get the 5 fish tag.

The schedule for each day is you head out after breakfast meet your guide at the boat, or not using a guide is your call, and go out catch lunch. Canada uses slot limits so you are looking for 3 walleye per boat (assuming 2 people and a guide) 16 to 18 inches. After you catch your three you can fish for continue to jig for the walleye or you can go cast for notherns. DNR likes to show up before lunch mid way through the week. First thing they do is go check the freezer where any fish you are taking home are stored with your name and tag number then they grab a boat and go find you to count the fish in your live well. If you have shore lunch in your live well and your guide doesn't have a tag then you could be looking at a serious fine even though you are going to eat the fish that day.
Shore lunch is not what i pictured, for shore lunch you pull up to an island tie off your boat, the fish are pulled out of the live well filleted on the spot, battered, fried and eaten with the same sides every day. Potatoes and bacon, macaroni salad and ham, baked beans (with bacon), coffee, iced tea, and cookies. I gained 5 pounds of shore lunch alone, it was totally worth it. 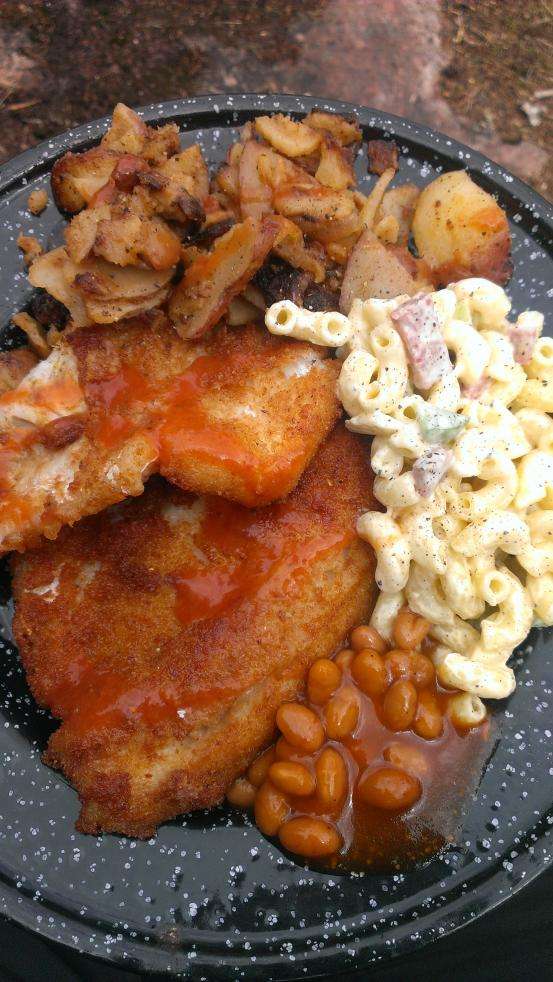 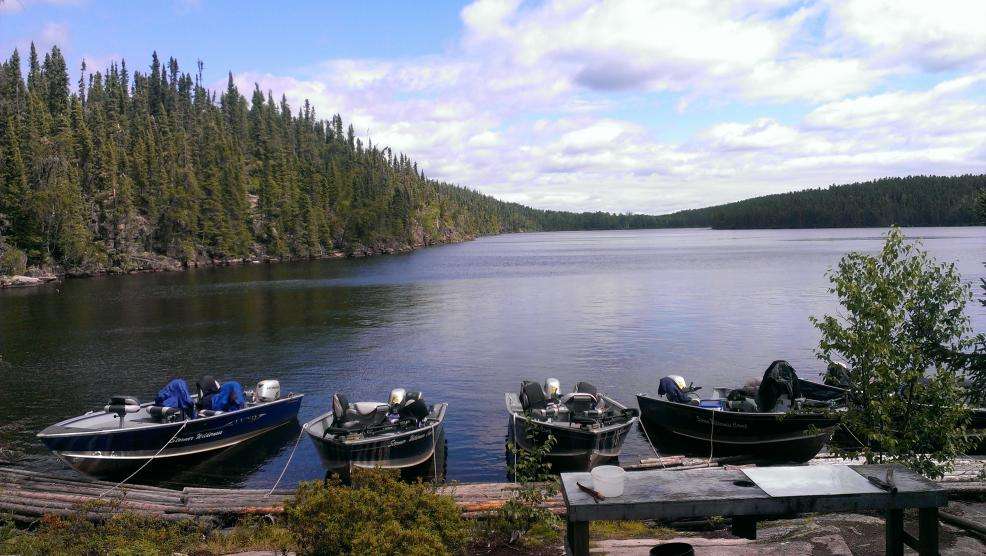 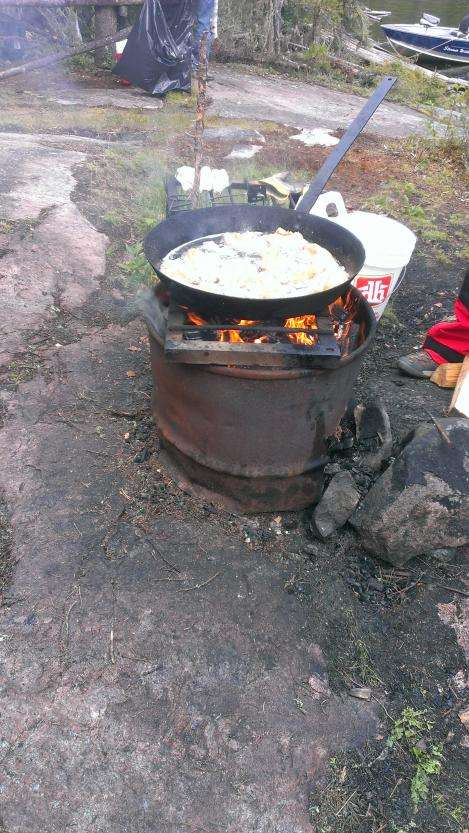 I made a mistake on this trip I did not bring my own rods, getting used to casting on what i consider sub par gear was a huge head ache, casting large baits got pretty scary for a while before i figured out the noodle of a rod Roger had to lend me. the first day was interesting but nothing to write home about. getting used to other people's gear threw a curve at me. I spent all afternoon trying to figure it out and not hook myself, roger, or the guide. it was nerve wracking.

We got back to the cabin kicked out feet up and relaxed, a cuban cigar for me some whiskey for the other guys. The next morning I found and ultra light rod a previous guest had left, it wasn't fancy but i happened to have my UL reel in my bag with some 4 pound line i figured this would make jigging for walleye fun. Man did it ever. Ultralight and walleye make for a good time.
That morning it was Roger and I in a boat with a guide and S and FIL in another boat with a different guide. Friendly insults were tossed around and it was a good morning we had been dragging in 18-20 inch walleye all morning with only one in the live well for lunch around 10:30 we began to get concerned about having what was jokingly called a "spam day". I hooked into a fish that offered no resistance and i thought maybe i one that fit in the slot. I was hauling it up when suddenly the fish took a dive and cut hard to the right, then ran under the boat. 3 huge runs later i managed to bring it out from under the boat. All you could see was a walleye tail with a GIANT 40 inch northern attached to it's head. I threw my phone at Roger to snap a picture when the big fish rolled back under the boat and i felt him let go. sadly the walleye was larger then slot so he was released to I'm sure the waiting jaws of the northern. 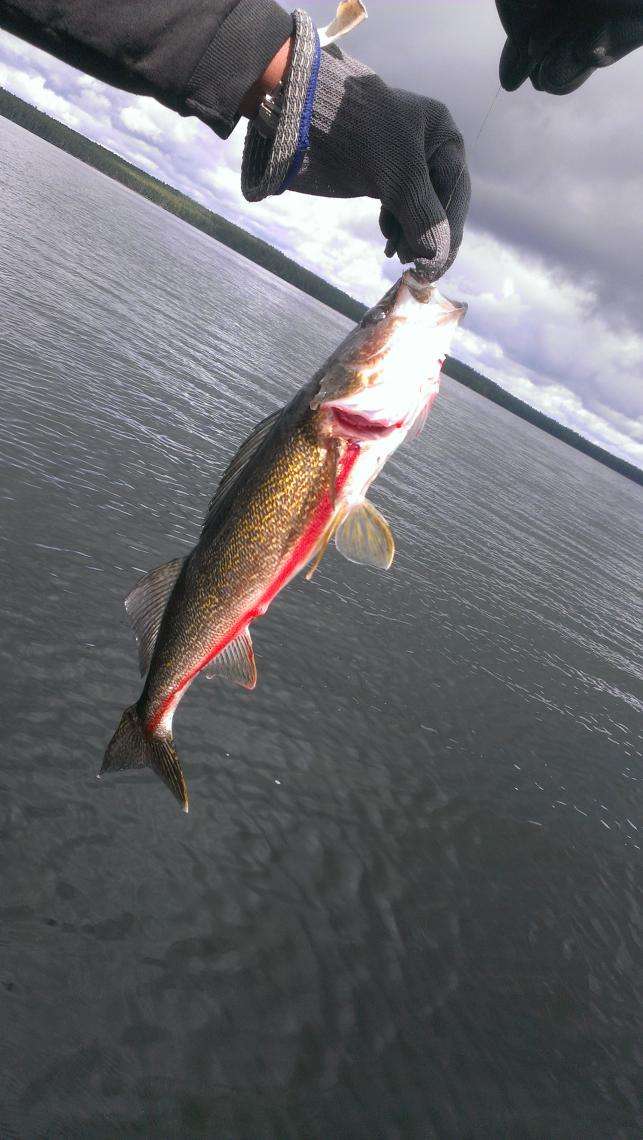 After lunch we went old guys against young guys with myself and S in one boat and the two geriatrics in the other boat. we jigged (old men wanted to jig for more eyes) off one of the fingers of the lake when the magic happened. my jig got slammed, line was screaming off my reel i'm calling out directions to the guide and doing my best to keep the rod tip out of the water, and time i gain any line of him the fish shakes his head and takes off. I have now i realized done myself no favors in the northern department with this UL rig. We figured there was a shelf down below us because this fish was running along a straight line back and forth back and forth at one point i saw a slight golden glitter from the surface then he rolled and was gone. All the while i'm getting shouts from the old men, about how i look good fighting stumps, and that fish is exercising me as i ran around the edges of the boat. 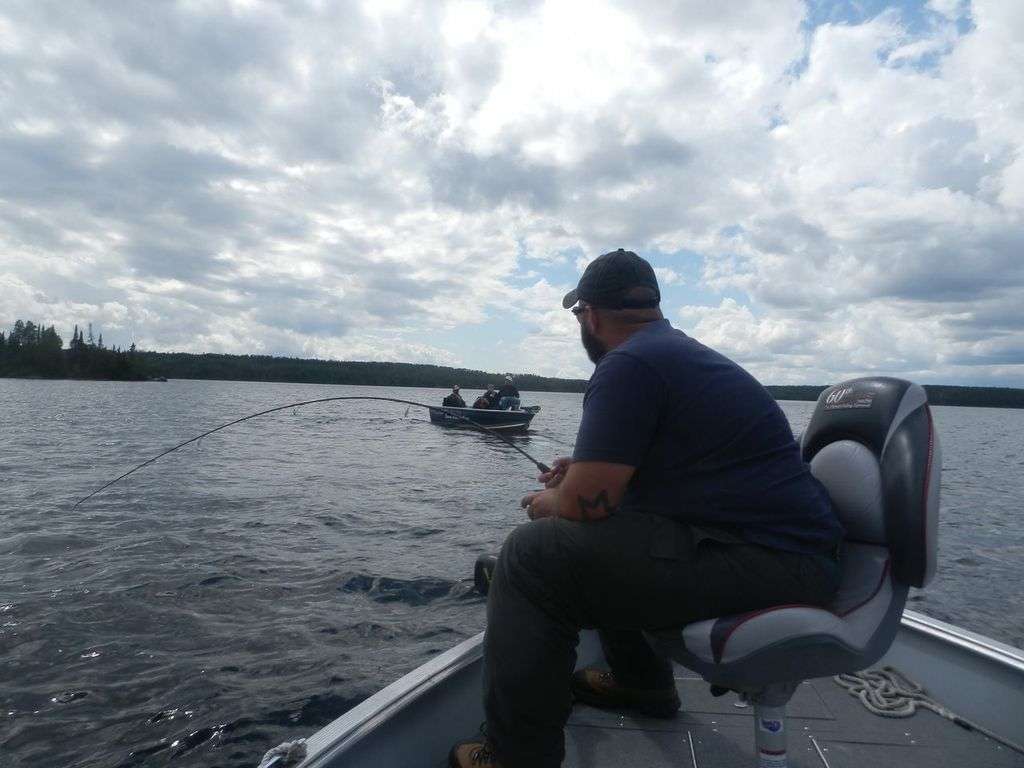 Then Roger gets slammed. He plays, boats, measures and CPRs a 40 inch northern while i'm still being drug around by mine. The fish i was hooked on literally drug the boat around. 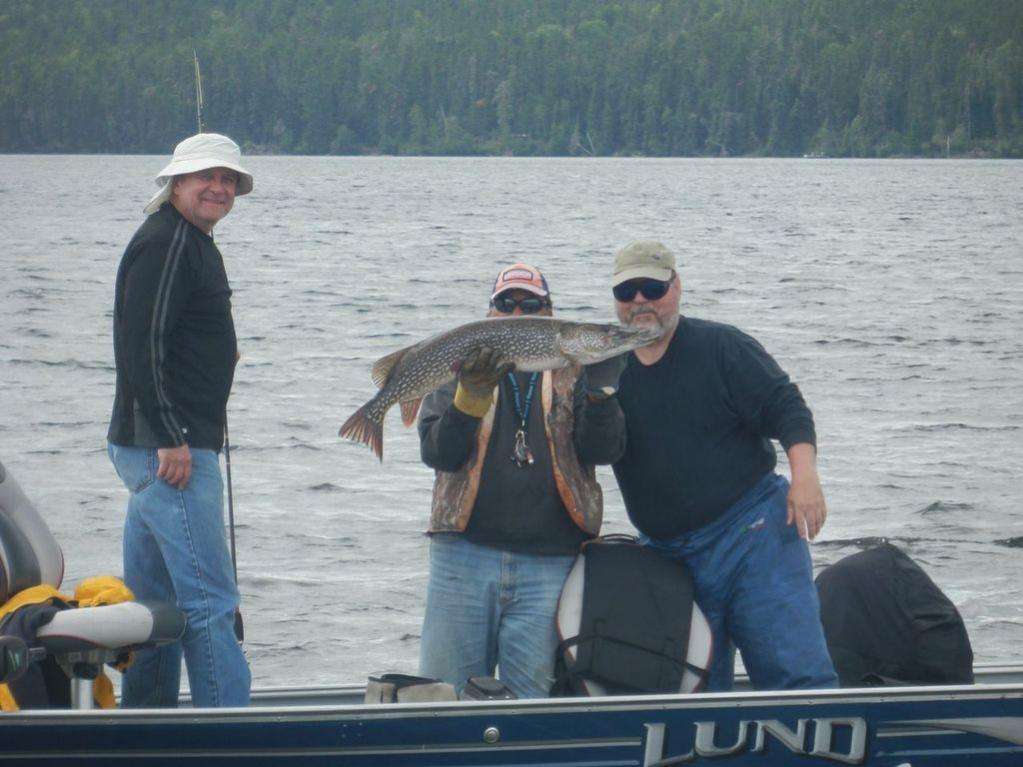 90 minutes in to the fight, I realized the fish was starting to slow that I had a good chance of seeing this fish and that a protracted fight would probably kill it. my drag was burned out of the reel, it was easy for me to push my thumb against the spool and feel the line snap. If i hadn't been so under gunned i would have tried to land that fish but i had no desire to kill a fish because i fought it to death especially one that I would have had to legally release.

The rest of the days fishing were a lot like these none stop walleye action, and when they shut off we would go throw things @ northerns. I was pretty keyed up on the knowledge that small mouth bass were in that lake, any time we got near a deadfall i was tossing something into cover looking for them. There were no smallies for me this trip however there were at least 5,000 hammer and axe handles waiting for me, literally i caught 15 one day and 22 the next none of them topped 20 inches. My best northern was 26 inches. I did get some Perch follows, and one of those little shit bit a chunk off the skirt of a musky spinner i was tossing but not commitment from a perch either. 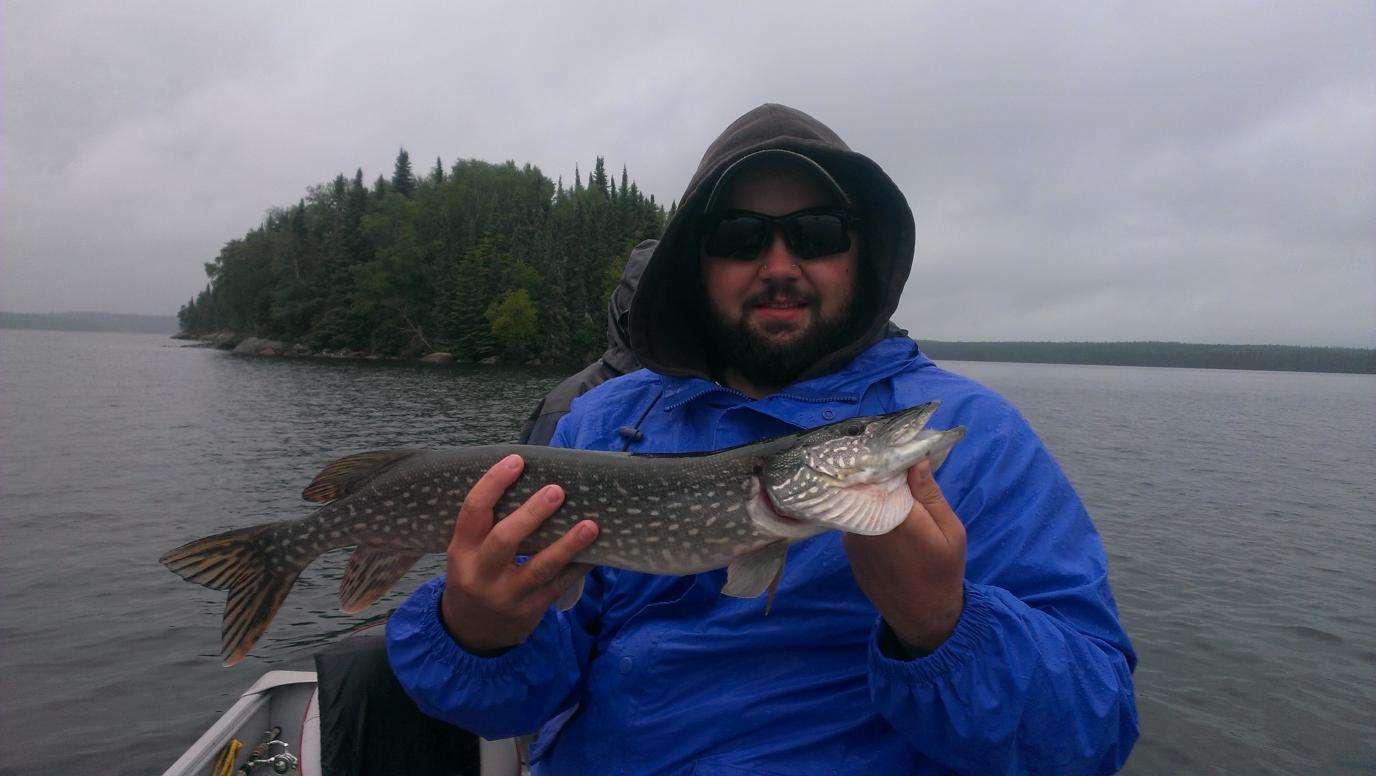 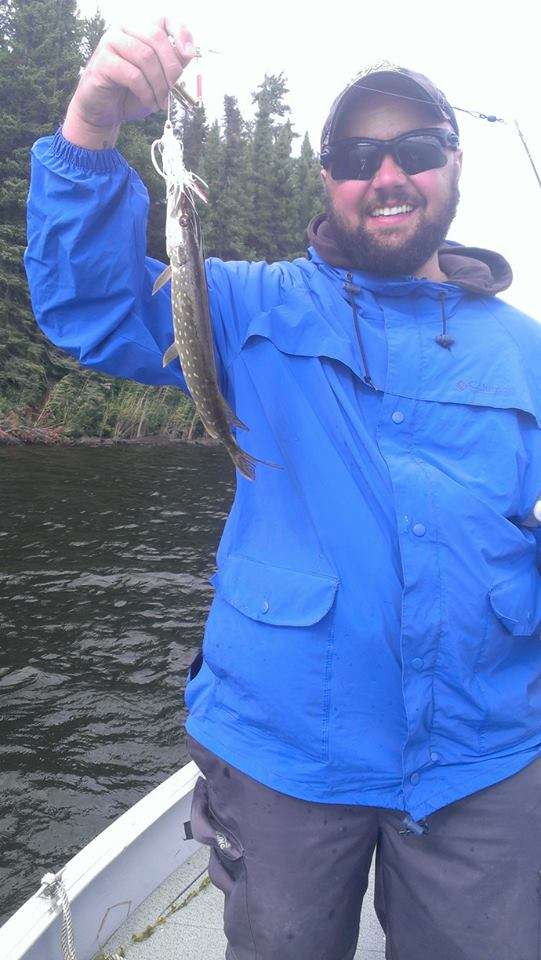 Over the course of the vacation we played musical boats, always running an informal competition to see while boat could break 50 caught walleyes in one morning, every single morning at least one boat if not both did that. It was insane the level of fishing activity. The final morning it was FIL and I in one and Roger and S in another boat. FIL says he wants to jig for walleye so we head off to do that. this is what he pulls in, all 36 inches of it. 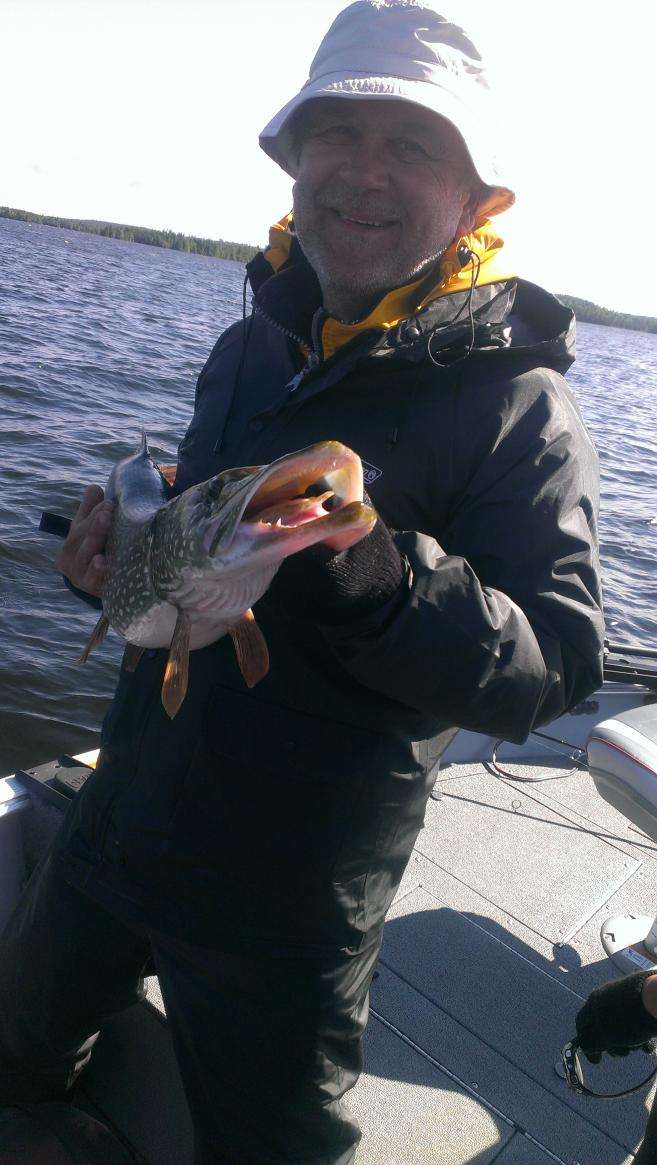 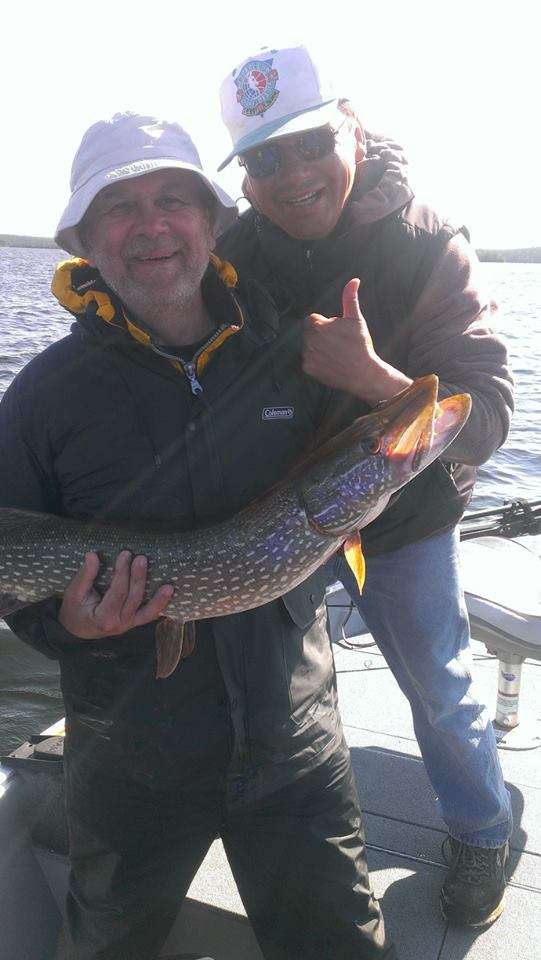 THe big Northerns apparently felt bad for the old guys and jumped on their jigs. 36 inches and above qualify you for the master angler list, biggest walleye and northern caught for the season get you a free return trip. FIL had the time of his life this fish was the perfect ending for his trip. 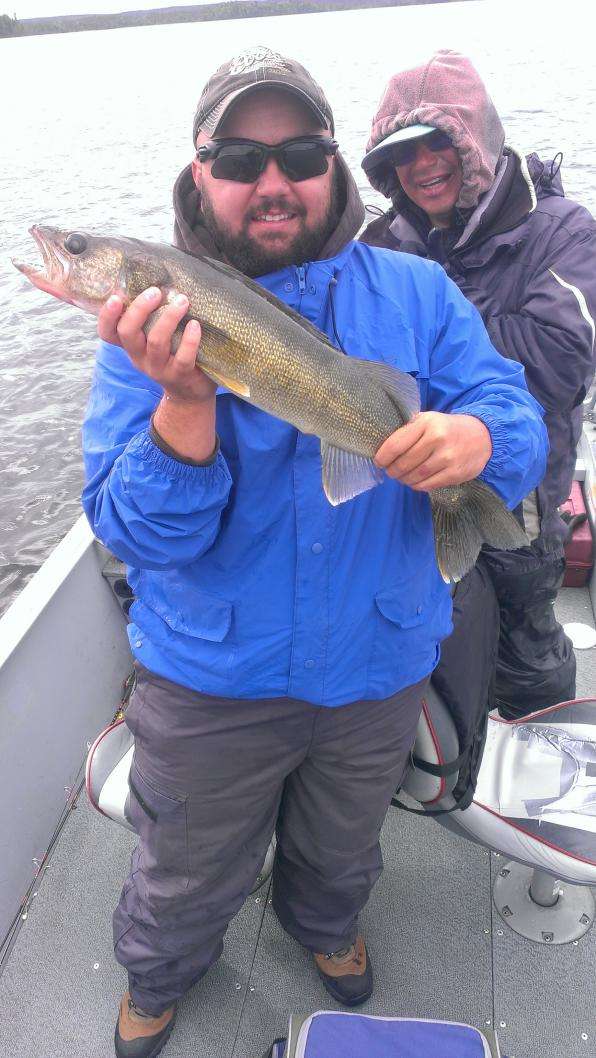 THis was my best catch of the trip 26 inch walleye, Northern walleye are so gorgeous. Here are some scenery pics, the trip home was uneventful and LONG so very long. But totally worth it.
Last edited: Aug 20, 2013

Nice! Looks like fun...and can't imagine a jacket as I am sweating my bag off here in Idaho.

Cool trip.
Thanks for the pics

Good adventure out on the water...can't beat it.
O

it was a phenomenal time one i really want to repeat.
L

pull up a stump for that shore lunch....

Awesome trip and memories made. Really like the pics as well. Makes me wish for a trip like that!
T

Where did u cross the border at baudette or I falls. What was the name of the resort and lake u r on. I have a cabin on the Canadian side of lake of the woods where we have some pretty awesome I fishing like that. Looks like a great trip congrats
1

Sounds like a sweet trip! I am dearly wanting to take my sons on something like that in the next few years. I'll second the request for the name of the resort and lake.
O

is the lodge we were in. The lakes are Stormer and Kirkness lakes, it's the only lodge on those two lakes. Heinz is the owner, he's a nice guy quiet and serious he runs a quiet place and has a huge number of returning clients. I spoke to a bloke who had been coming 28 years.
We crossed at international falls. It's a long drive from Minneapolis however it's way cheaper then flying into Red Lake airport in Canada.

I gotta do that someday
You must log in or register to reply here.