It hit me just the other day while talking to my son.... tomorrow marks the 10 year anniversary of his first hunt... and what a great hunt it was.

Jr. was 10 years old and had passed hunter's education just in time for turkey season. Instead of making the 4 hour drive to my normal turkey spot, I decided to try somewhere new. Opening morning, after a couple of uneventful hours, we were heading back towards the truck with me calling sporadically. We were making so much noise walking, I barely heard the gobble behind us, as this tom was frantically trying to keep up with us. We quickly sat down by the only tree around and I continued calling. The gobbler came out over 40 yards away in full strut. When he did not see a hen, he slowly let his feathers down like he was feeling dejected. Knowing the gobbler wasn't going to get any closer, and also knowing the little .20 gauge Jr. was shooting wasn't going to cover that distance, I let the tom have it with my 3.5 inch 12 gauge... Jr was not impressed. Here we are with my gobbler, and here he is with the "Dad shot my turkey" look on his face. 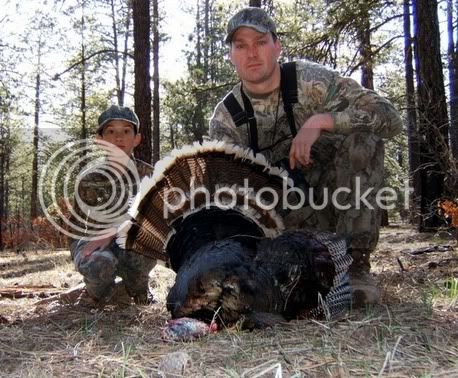 This one is my favorite pic.... he looks like he's looking up a ladies skirt... 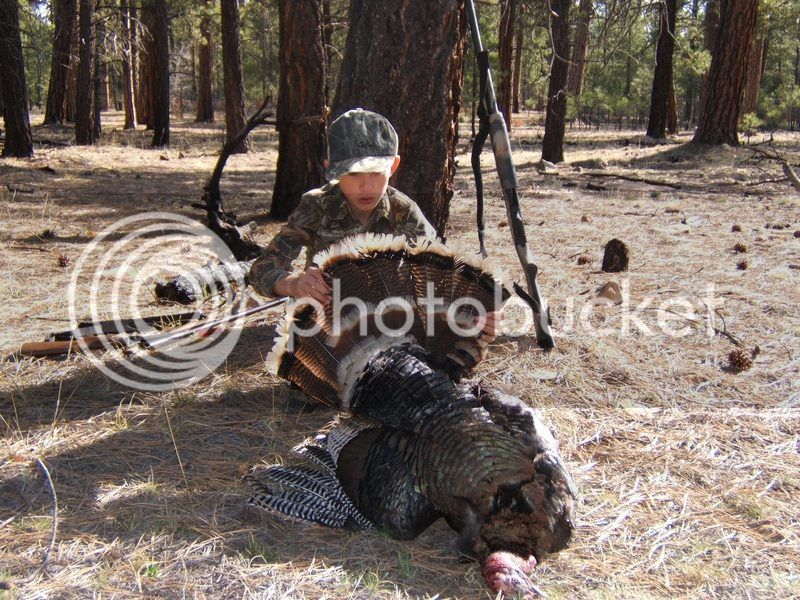 That evening we were able to locate a couple of gobblers to hunt in the morning. First thing the next morning, we had two gobblers talking to us. We would sit and call, and they would answer but move further away. We kept creeping closer and calling until they decided to start coming our direction. I had Jr. set up on the sticks with his shotgun, and these two gobblers came in to about 15 yards. I whispered to Jr. "Shoooooot"... Jr. replied "Waaaaitt".... I said "Shoooooot!!!!". .. He said "Waaaiiitttt". Slowly the gobblers walked off. For the life of me, I couldn't figure out why he didn't shoot. I asked him "What the heck were you waiting for?". He said "I didn't have a clear shot". The gobblers had a few pine needles in front of their heads, so he was following what he had learned in hunter's ed. to only shoot when a target was clear. After I explained that few pine needles didn't really matter, he regretted not taking the shot, but I was proud that he had learned and listened in his class.

The third morning we headed back to find the two gobblers, and although they answered, they never would come in. We chased gobbles for a while, and when we finally got one to start coming in, Jr. suddenly developed a case of the hiccups chasing it off.

We went off after the jakes and were able to call them in once again. This time Jr. didn't miss. Hugs and high fives, and we ran over to get his bird. He was still flapping around, so I grabbed him by the feet and picked him up. I never knew how powerful a turkey's wings were until that bird hit me square in the nuts, folding me over on the mountain, with Jr. laughing hysterically. 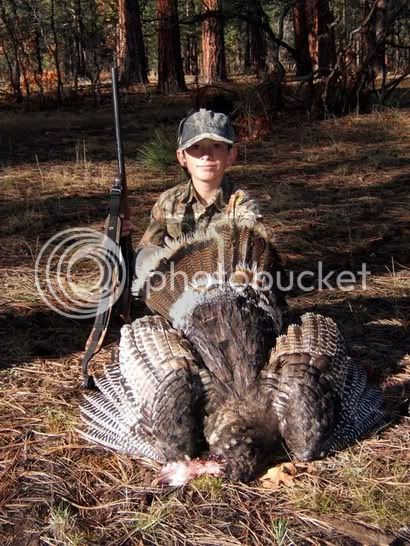 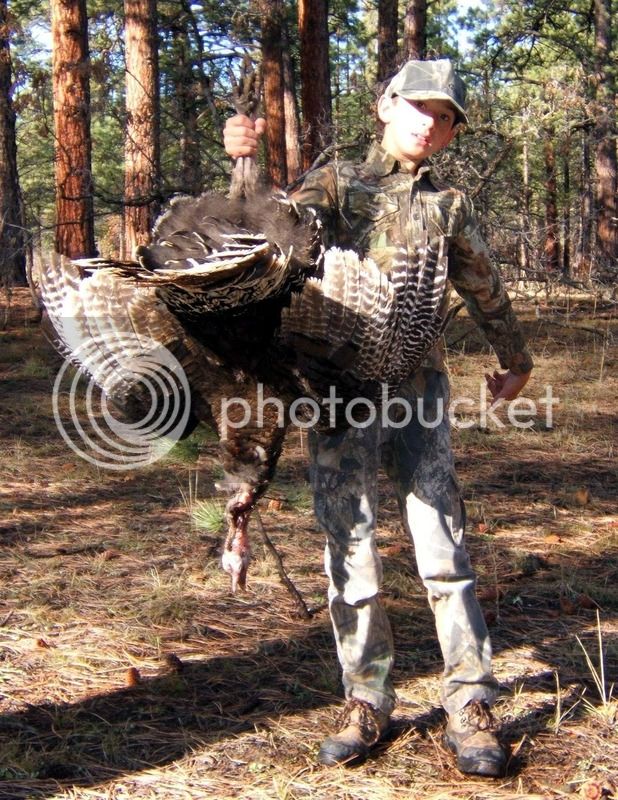 Since then, we've had some amazing hunt and made a lot of memories, but none stick out as much as that first hunt. I remember every moment of it.
Last edited: Apr 14, 2015

Thanks for the trip down ( your ) memory lane. Great adventure with your best ever hunting buddy. Is it wrong that I laughed at you getting hit by the flopping jake?

I hope to have a successful first trip like that with my daughter when the day finally comes. Thanks for sharing!
R

Congrats to you and your son. Good story. I can't wait to get my Grandson out there enjoying Gods creation.
B

Awesome story, trophies, and pics! Priceless time afield with your boy. Congrats
You must log in or register to reply here.